Happy Birth Day, Riley! (or, The Internet was Down so I Caulked the Bathtub)

This morning I was planning on working on the family newsletter after breakfast, but instead the internet went down so I decided to re-caulk the tub, a project that has been a long-time coming. There are a couple of moldy spots on the tub that I have not been able to get clean the entire time we've been here and it's been driving me fairly crazy.

A few weeks ago when I was scrubbing the tub it dawned on me that the tub wasn't moldy, rather the caulk was shriveled up and rotting and needed to be replaced.

Today was the day I tackled that.

The internet was down, it was raining, and Andrew took the car to campus.

What else was I going to do?

The first step was to remove the old caulk. We bought what I thought was magical caulk remover, but it turns out it's only magical if you apply enough elbow grease. It took me hours to get the old caulk out. When I was finished I...took a nap...and then got up and got ready to re-caulk the tub.

I got my supplies, studied some how-tos online (the internet came back on), loaded the caulking gun, snipped the tip of the caulk tube, and got to work...kind of.

I squeezed that trigger with all of my might but nothing happened and I thought to myself, "This (also) is going to be a lot more work than I bargained for if I can't even get any caulk to come out!"

And then caulk started oozing out the back of the tube because, as it turns out, you're supposed to put something long and sharp down the tip of the caulk tube to break the seal inside. I missed that step, probably causing dozens (hundreds? thousands?) of handier people than me to roll in their graves.

I found a long wood skewer in a drawer and poked a hole in the tube and then spent the next hour caulking the tub while also trying to keep caulk from oozing out the back of the gun.

It was a much messier project than I intended it to be but we ended up with a beautifully caulked tub, if I do say so myself.

The leftover caulk, as well as the caulking gun, went into the trash because there was no way to salvage them that I could see.

"That's why we got a $2 caulking gun," Andrew shrugged when I showed him the damage I'd done.

Other casualties of this project were an entire roll of paper towels and my sanity, though the latter should be recuperated in time no longer spent agonizing about how to get those mold spots off the tub (because they weren't mold spots—just gnarly old caulk). I suppose the overall cleanliness of the house was yet another casualty because Benjamin and Miriam got out the trains and the blocks and the farm and books and little pet shops and...everything else we own.

I'll make them clean that up tomorrow after the egg hunt.

While I was without internet and was busy with my bathtub, more exciting things were happening in other parts of the world (if you can imagine anything more exciting than caulking a bathtub).

His name is Riley William and doesn't he just look sweet? 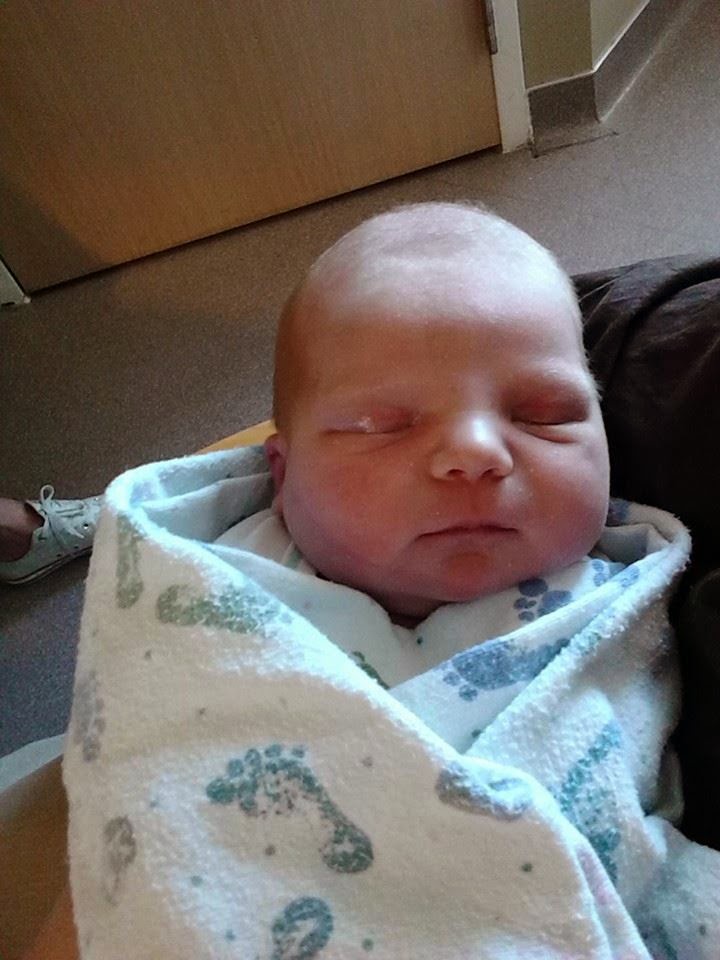 It was a pretty productive day, even if I didn't get as much done on the family newsletter as I'd hoped to. I did, however, finish reading my mom's cousin Ted's autobiography—all fifty-nine pages of it. He passed away in October so I'm trying to condense his autobiography so I can include a life sketch in the newsletter. I was also sent a "brief life sketch" of his but he had nine kids and dedicated a paragraph to each of them, so it was more a "family sketch" than a "life sketch." I hope to include a few good stories from his longer autobiography.  Once I'm done with that the rest of the newsletter should be, as Andrew would say, plug and play.
Posted by Nancy at 9:54 PM