Andrew and I started talking about this trip in secret weeks ago. My friend Marian emailed to see if we wanted to head up to the mountains the last week of intercession and we were on the fence about whether or not we'd be able to, but ultimately—obviously—we decided to join in on the fun and I'm so glad we did! We didn't tell the kids though; we packed everything into the van on Wednesday night after the kids were asleep. We woke them up on Thursday morning and told them to eat breakfast, get dressed, grab a book, and hop in the van.

It was a great surprise!

We spent three days and two nights on Beech Mountain—"the highest incorporated town east of the Rockies" at 5506 ft—in a beautiful cabin filled to the brim with seven adults (Annie's husband had to work) and fifteen children (eight and under):

Bedtime was one serious game of whack-a-mole! But everyone always had someone to play with and they all got along so well!

We headed straight to the visitor's center to hit up their free sledding hill. It was around 50°F (10°C) and they haven't gotten much snow this winter (yet—I hear they usually get around 90 inches, though in 2014 they only got 55 inches (for Utah-reference, Park City got 263 inches in 2014 (which rivals Lake Louise or Sunshine Village in Banff for Albertans reading this))) but they have a snow gun nearby and they happily produce their own snow so that everyone will come visit and spend money on their mountain.

I must say, I'm a fan of fake snow. All the fun without all the cold.

We had a great day that first day on the slopes. The hill is only for children under 12, but if you ride with a little kid adults can go, too, so the grown ups all had their fair share of fun (there were plenty of children in our group to ride with).

Against my better judgement ("if you don't take her down, I will" he said; "just do it" he said; "it'll be fine" he said) I took Zoë down the gentlest little slope, hit a bump, flipped around in the air, and landed hard on my side to break Zoë's fall. I'm a lovely shade of purple, but the baby is fine.

We stuck to teeny weeny slopes after that and spent a lot of time simply exploring the snow. That was more Benjamin's speed, though he did go down the big hill a couple of times with either Andrew or me.

Ready for way too many pictures of us sledding? Here we go! 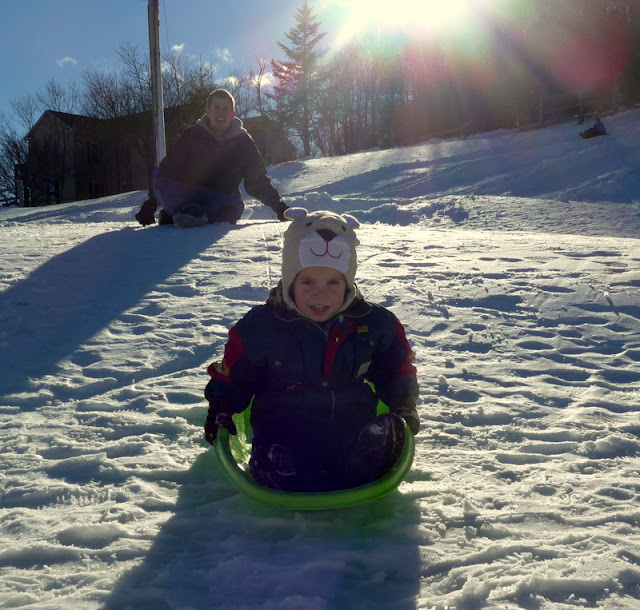 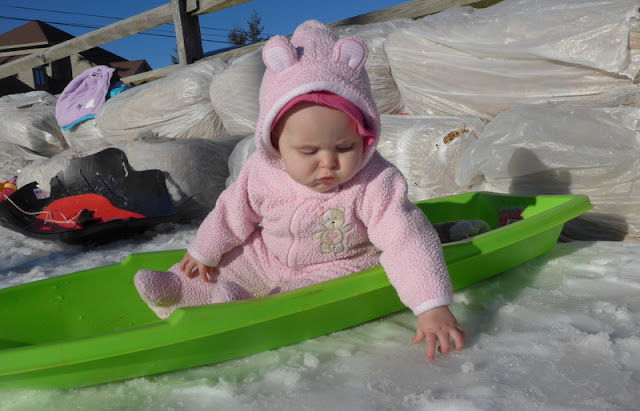 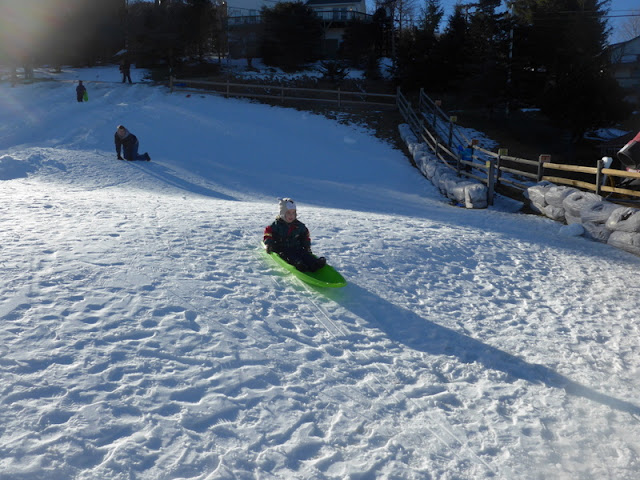 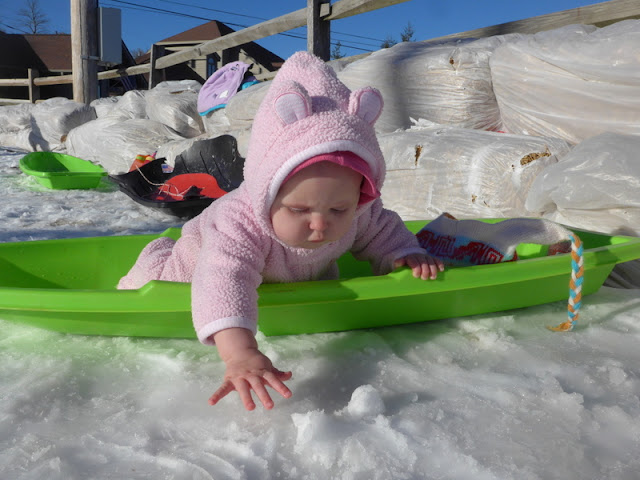 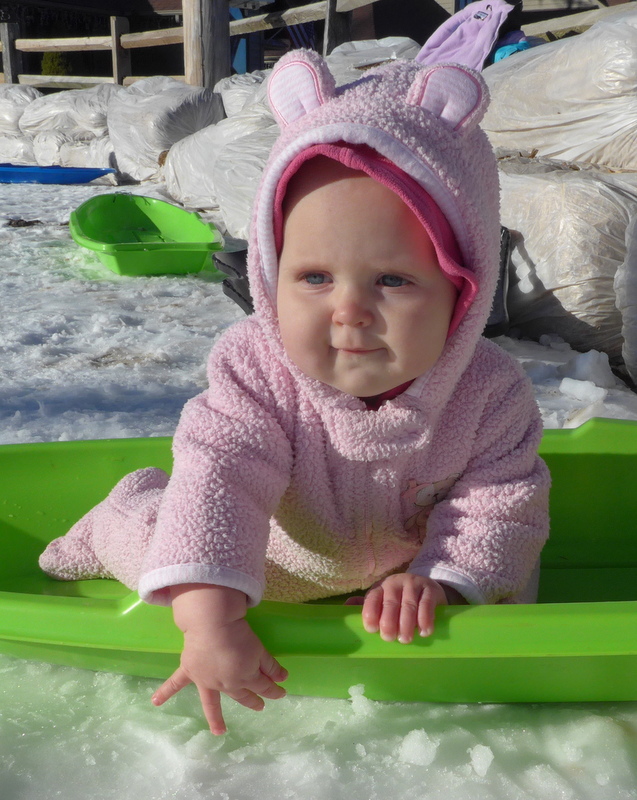 Here's Miriam carrying a huge chunk of snow. We're all bundled up because even though it wasn't very cold (until the sun started sinking) the snow was melty and we all ended up soaked through to the bone with ice water. 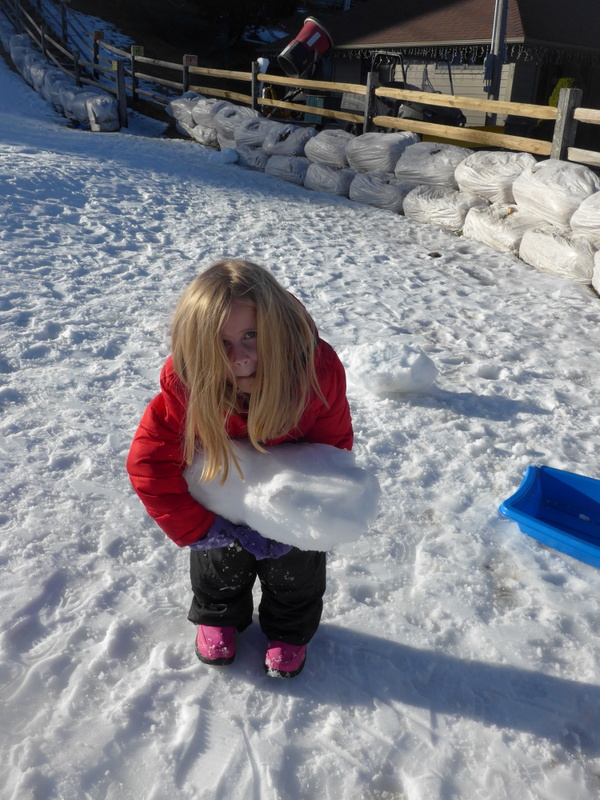 Here's Andrew and Benjamin careering down the hill: 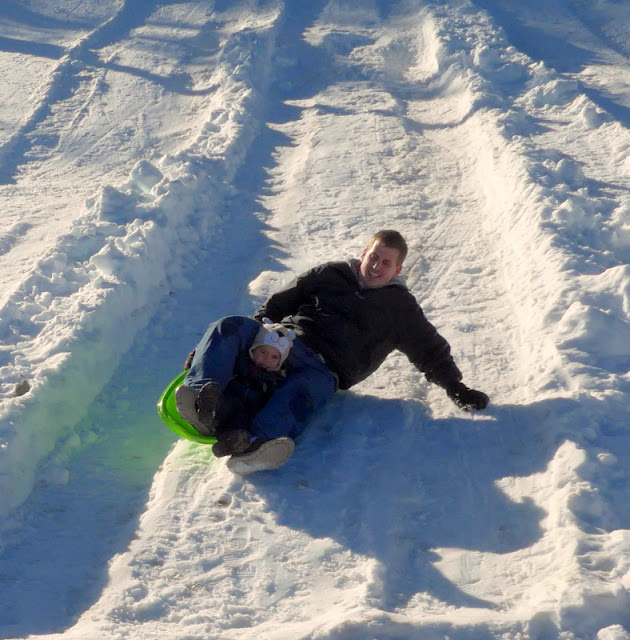 Here's Rachel about to take a tumble (that's about what Zoë and I did; about the same spot, too): 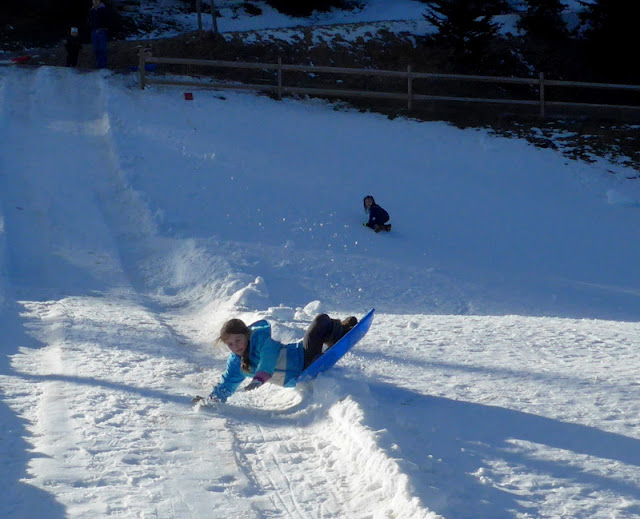 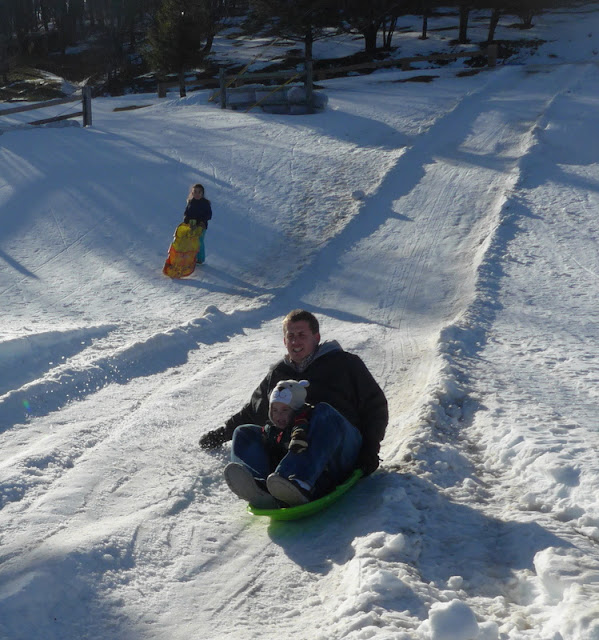 After crashing into the straw bales: 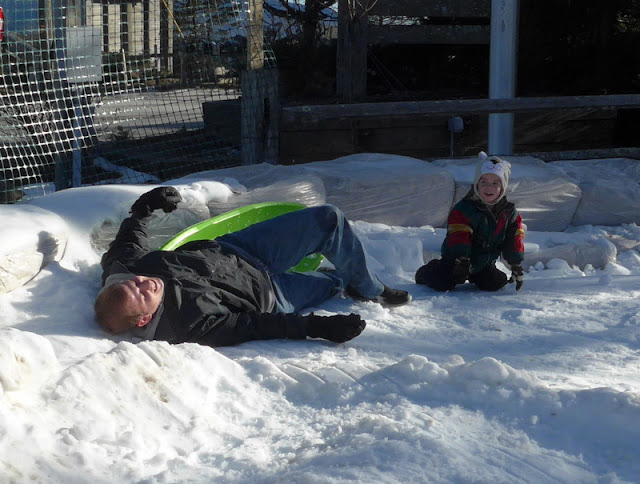 Miriam helped Zoë go down the tiny hill; it wasn't part of the official track but no one stopped us from sledding there so we went ahead and did it because their "bunny" hill is too dangerous for babies (trust me): 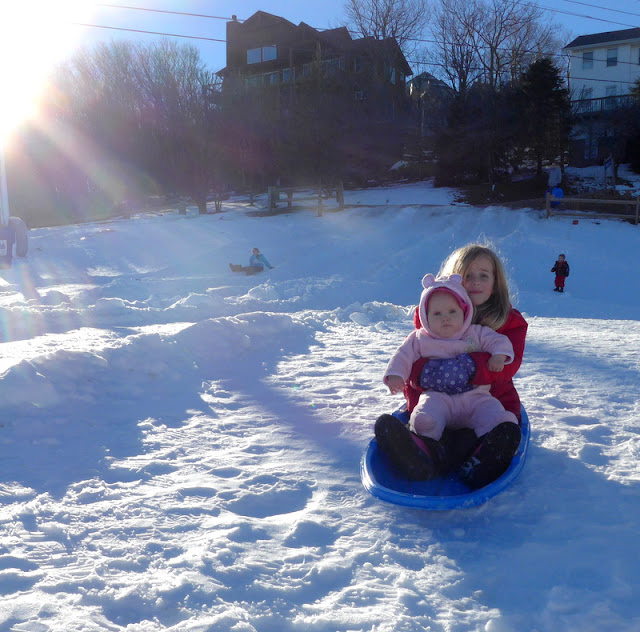 The sun was getting lower and lower and we were getting colder and colder but we'd brought up Annie's sleds for her and knew she was on the way (and that her boys would want to go sledding when they arrived) so we waited around for them at the hill while Marian (et al) went to open the cabin for Jana and her family.

Here's Rachel on the sled: 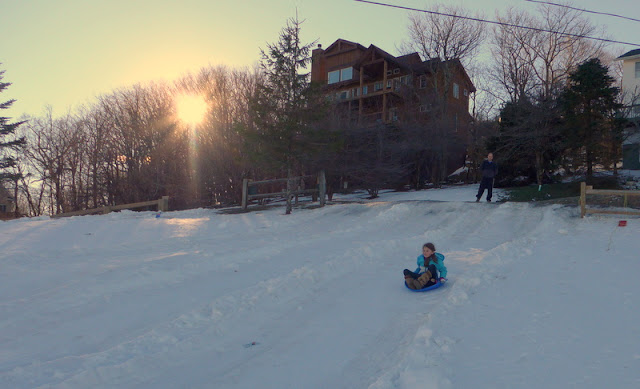 And here's Benjamin doing some "bum-sledding" (his phrase): 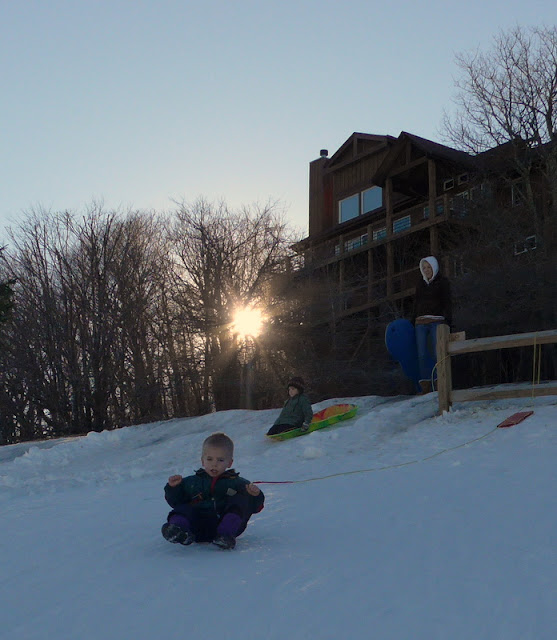 This picture shows Benjamin bum-sledding; Zoë and I are at the bottom of the hill and the snow gun is the thing that looks like a giant cup on a truck to the left of the frame: 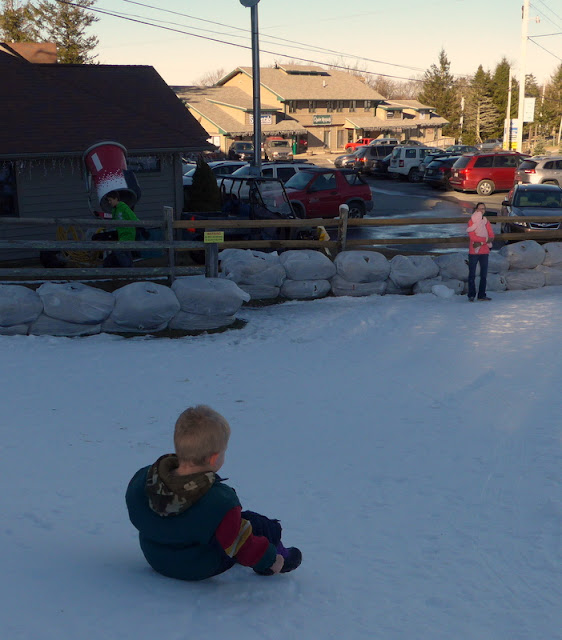 Here I am sending Zoë down our self-proclaimed bunny hill: 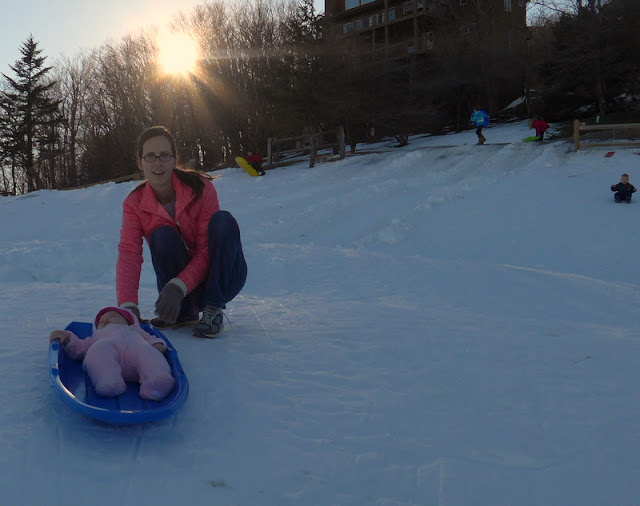 And here's Benjamin taking her down: 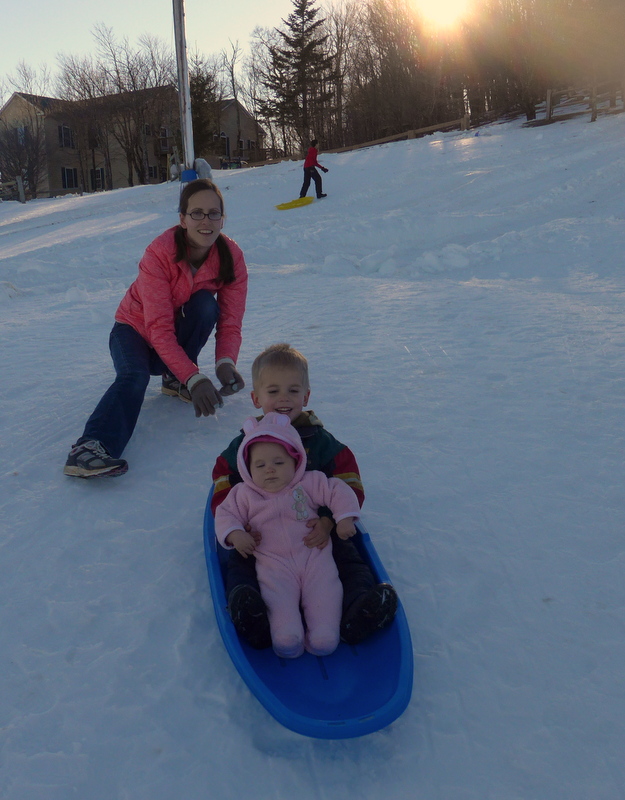 She wasn't sure if she liked it or not: 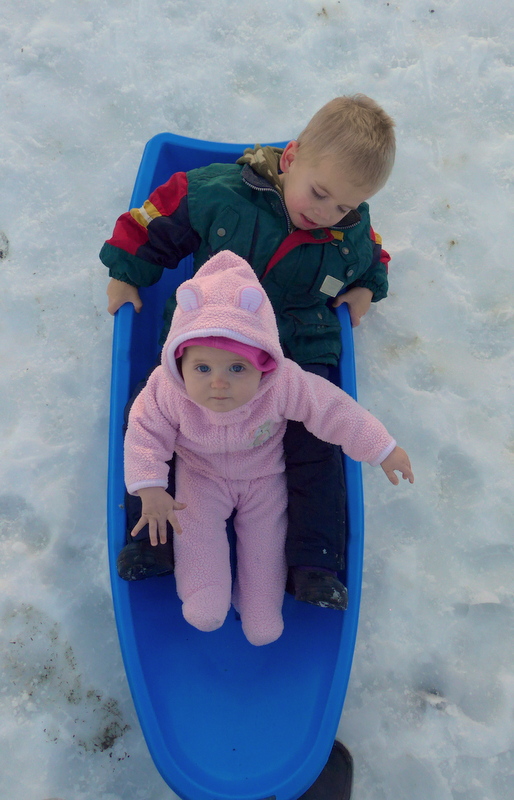 Here's Miriam getting ready for another turn: 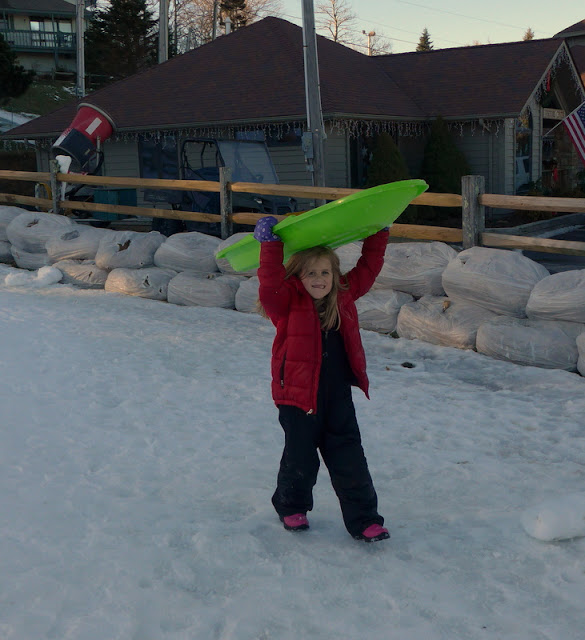 And Rachel, right after finishing a ride: 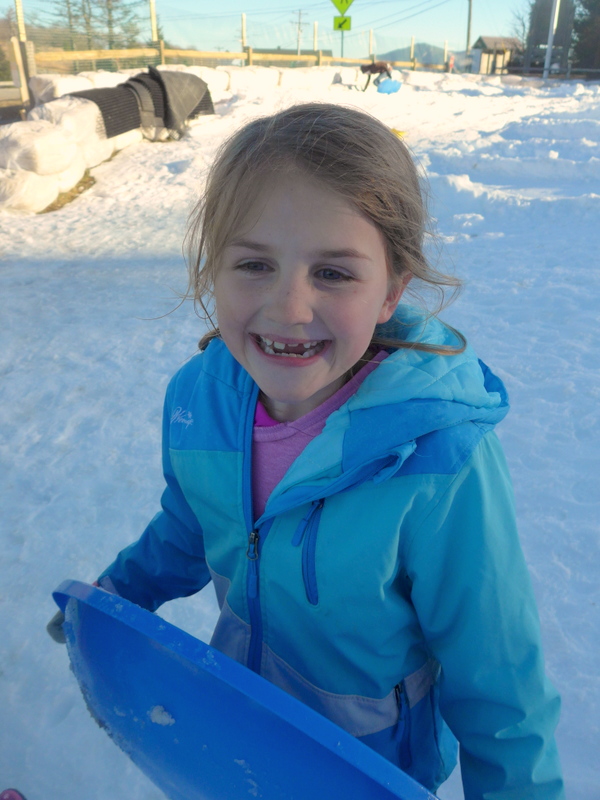 And Zoë being unimpressed with the out-of-doors: 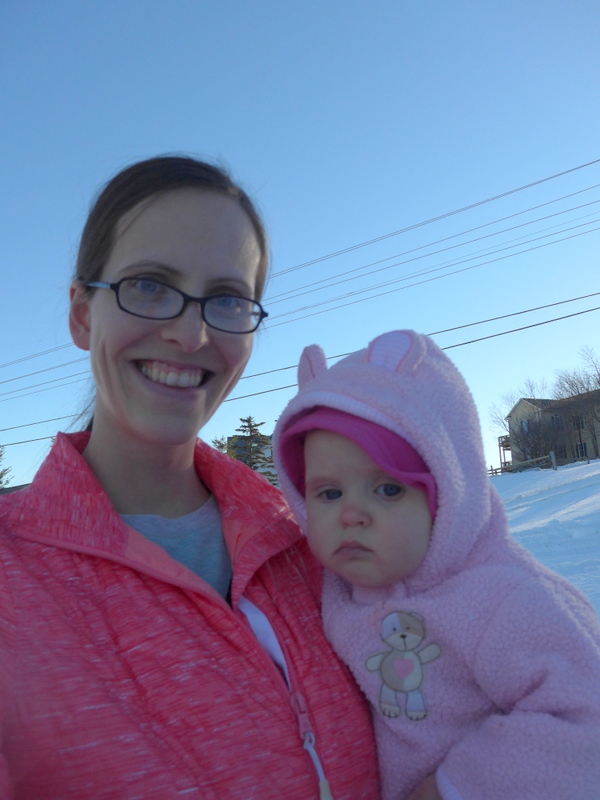 Here's Miriam zooming down the hill: 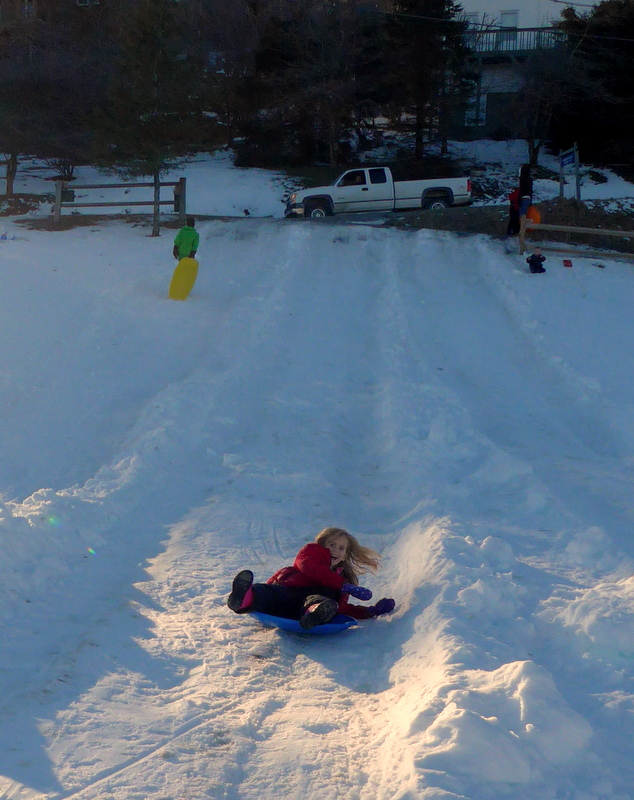 And here are Miriam and Benjamin just playing in the snow at the bottom of the hill: 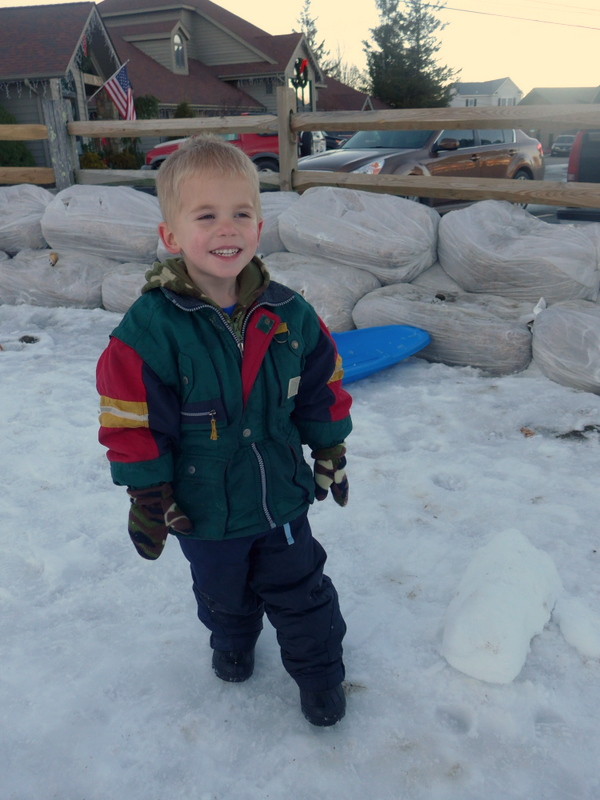 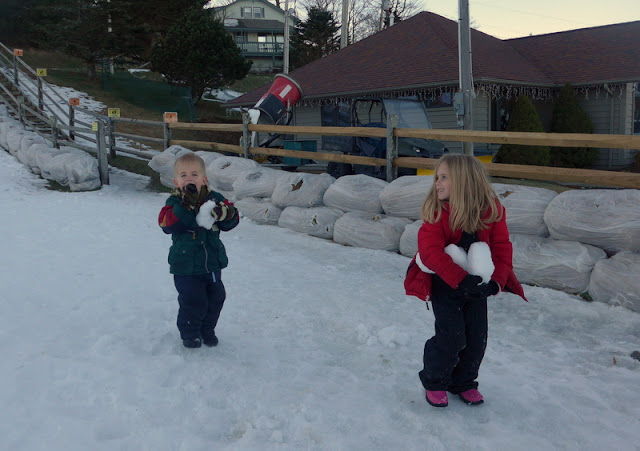 Benjamin kept eating the snow. I kept telling him it was dirty.

"That's exactly what I mean!" I said. "Everyone's been walking through it. Look at how dirty it is!"

"Mmmmm...I like dirt!" he said, and took another big bite. 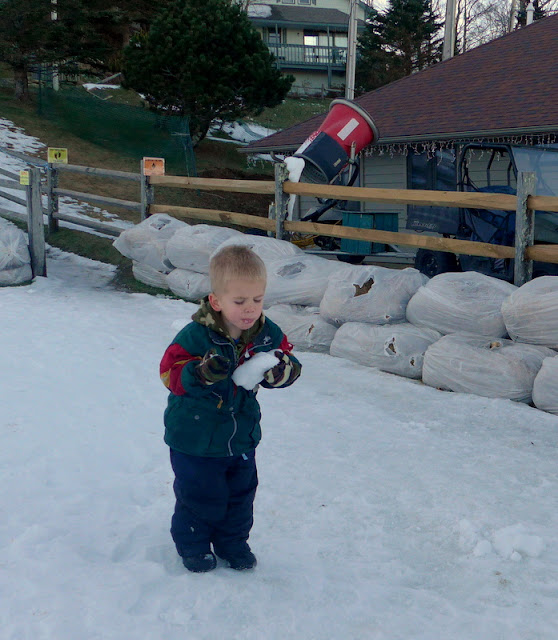 We actually couldn't keep any of the three-year-olds from eating the snow. When we went back to the hill the next day Benjamin and his little buddy Ollie were on their bellies, nearly nose-to-nose, licking the ground together. Fortunately they'd chosen a fresher-looking bit to lick. Unfortunately I plugged the camera in to "charge" overnight in a dead outlet at the cabin so it didn't really charge at all, which means I didn't take very many pictures our second day on the mountain.

Eventually Annie and her kids showed up and we had a fun sledding with them for a while before, wet and cold and tired, we headed back to the cabin, where dinner was being prepared. We took turns cooking meals for everyone, which meant that we got three days of very yummy meals, but only had to actually cook once (or in Marian's case, twice). Marian made dinner that first night—Hawaiian haystacks—and then we played games and put the kids to bed and played more games (and put the kids back to bed) all night long.

We took the basement rooms because the girls wanted the bunk beds, which meant that we also got the smallest bed in the house. Upstairs (and up-upstairs) had two king-sized beds and a queen-sized bed, and we got a...full. It would have been nice to have a bigger bed because we co-sleep with Zoë (so a full-sized bed was just a smidgen more crowded than we were used to), but at the same time, it made it really nice to come home to our now-seemingly-spacious queen-sized bed!
Posted by Nancy at 9:29 PM