We went for a walk this afternoon in order to make a better prediction about whether we'd have school tomorrow. I'm guessing we'll be on a delayed schedule, which is funny because Wednesday was supposed to be an early out day (but they took that away from us for obvious reasons (or perhaps not so obvious reasons since going a full day on Wednesday doesn't make up for one of the three snow days we've taken (except that if it was another early-release day and they made us go into school late then going to school would be pointless)). Let's not even talk about how there's snow in the forecast for Thursday.

Anyway, Miriam promptly got the stroller "stuck" in the snow and had to do some maneuvering to get Zoë moving again. Because treacherous. We were surprised to be confronted by a snow plow, desperately trying to scrape off the piddly bit of sludge left on the road. It really wasn't enough to warrant a scraping. 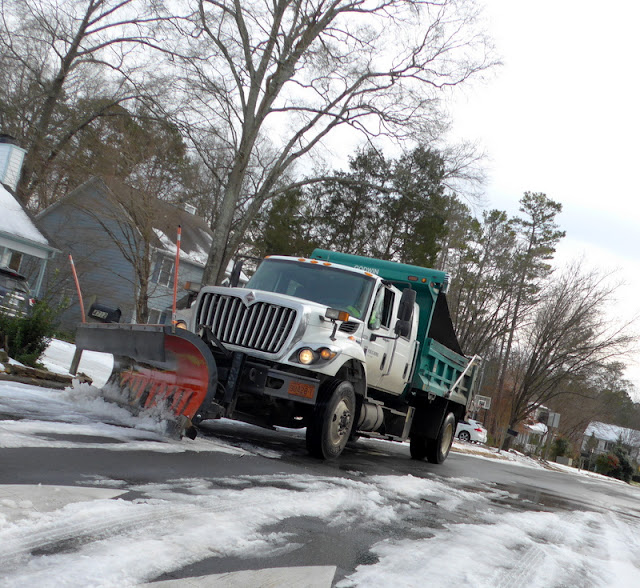 So imagine our surprise when we came across another snowplow! Yes, two snowplows were making the rounds in our neighbourhood, doing loops to make sure they got every bit of ice cleared that they could. It seemed a little overzealous to me, at least at this point. Everything's melting anyway, and the roads had a clear path. The trucks were mostly pushing puddles, acting like a giant squeegee rather than a snow-mover (I've been informed that there are neighbourhoods worse than mine; things are still hazardous out there because ice is still extant—I hear, ya, southerners (but just know that snow plows would be resting easy up north for this amount of wintery-stuff). 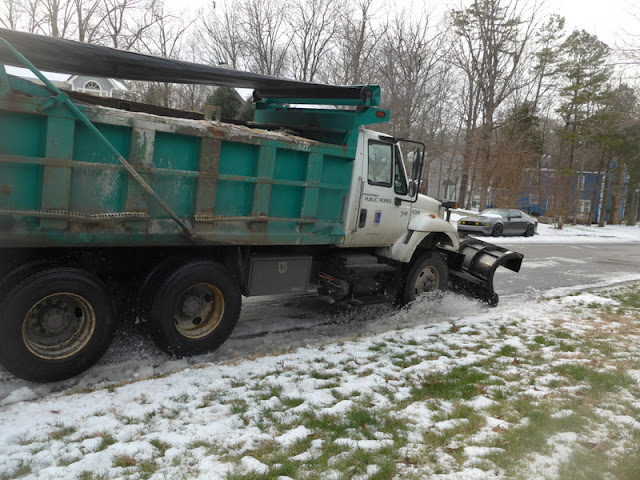 The plows did manage to put together some fierce piles though. I mean, look at this! 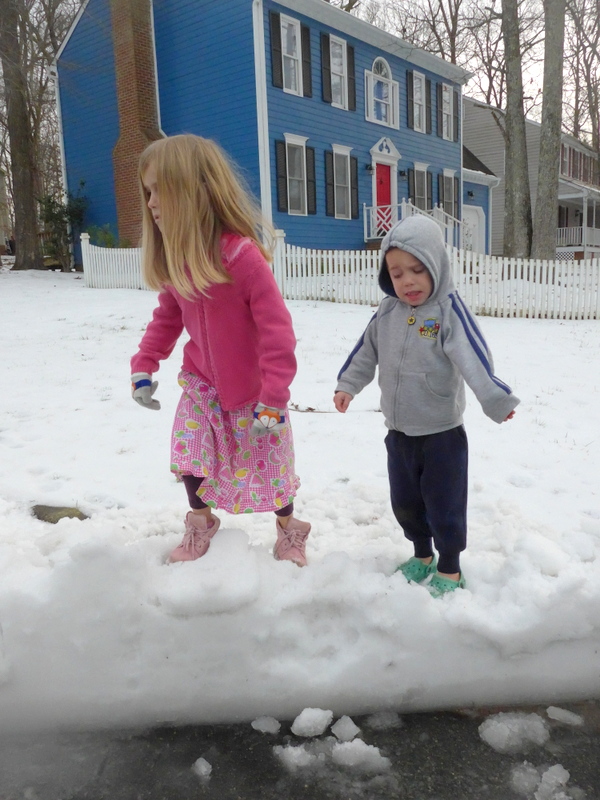 Oh, yeah. Benny's wearing his crocs out because he refused to put on anything else. He regretted it later (we can only hope he learned from this experience).

Here are the girls crouching behind a snow pile: 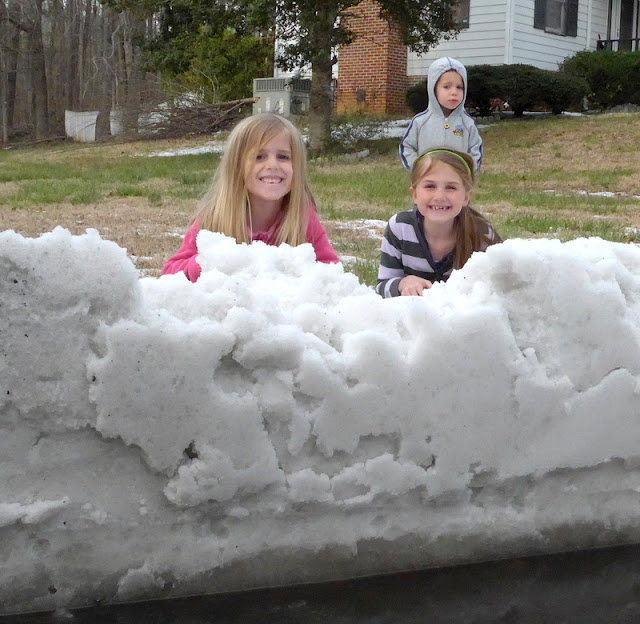 And standing on the same pile: 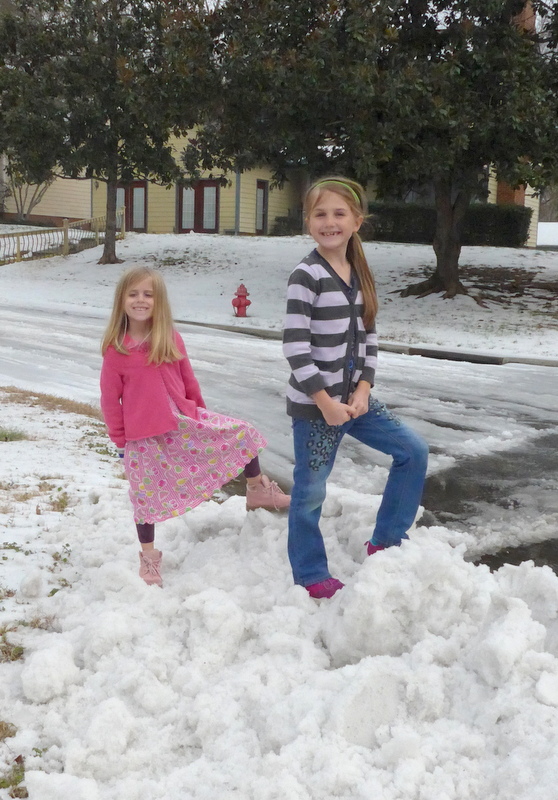 Here's what the main road in our neighbourhood looks like (the side streets are still fairly slick but my fingers are still crossed that they'll be sending school buses out (they seriously need a snow-friendly bus route (like a route that buses take when its snowy, making it a familial responsibility to get a student to the snow-route bus stop, rather than waiting for every road in the county to be dry)): 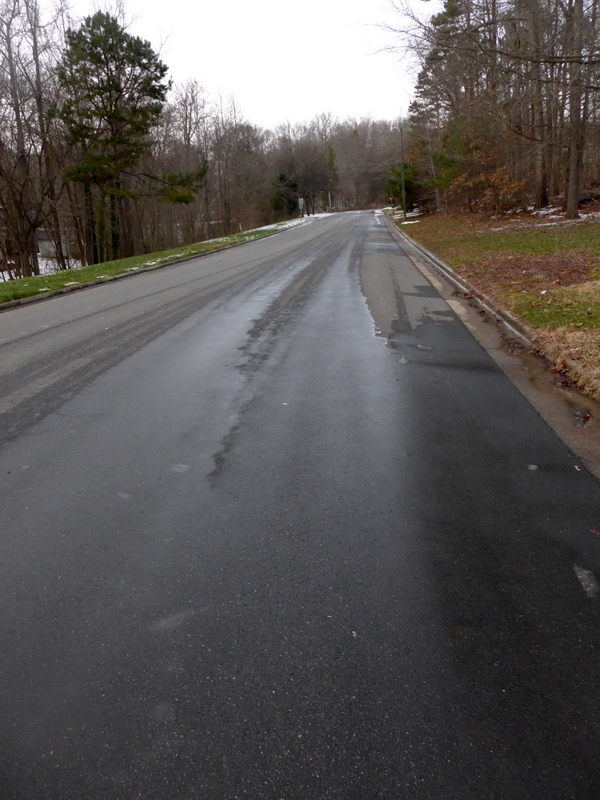 We had fun playing on the icy parking lot at the club house (that would've been less icy had any effort been made to clear it or if cars had been driving on it with any frequency (our little stroller was making ruts in the slushy ice so surely cars would have broken the ice apart)): 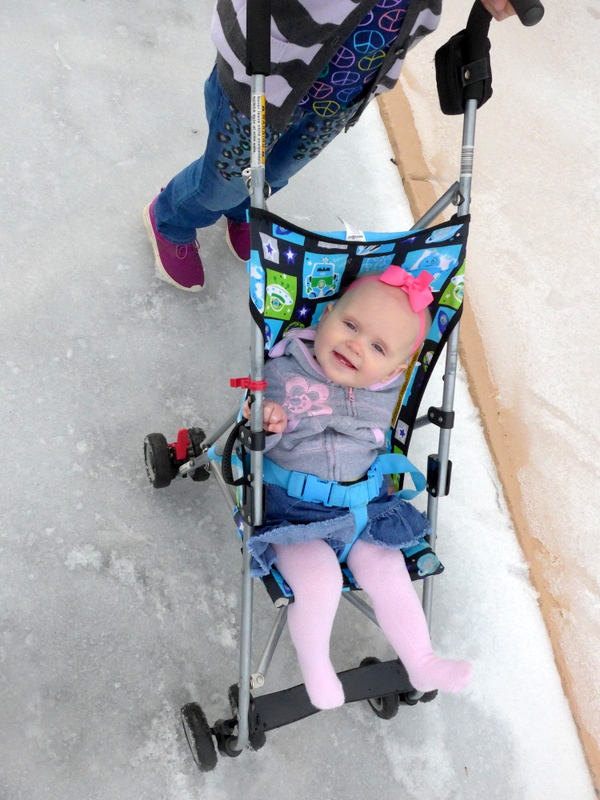 Here's Benjamin complaining that his feet are cold and that no one's waiting for him: 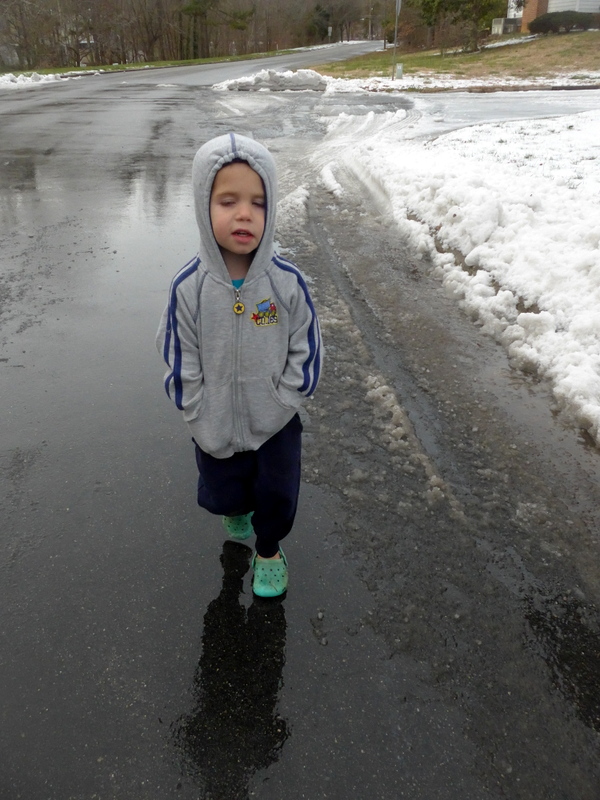 And, finally, here's Rachel with a little glove bunny on her hand: 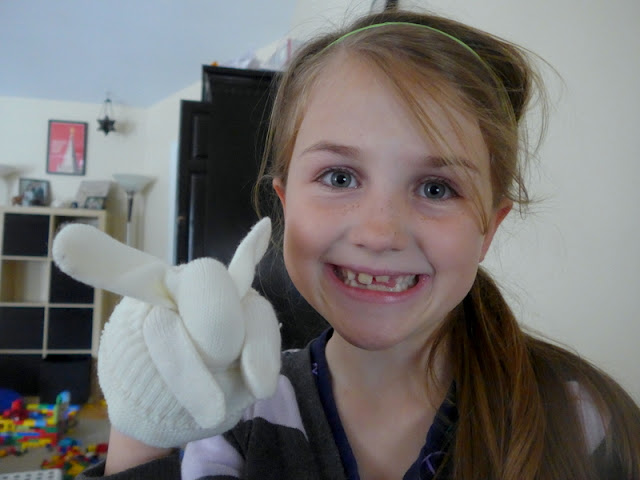 I showed the kids how to make this while we were walking home. My friends and I played bunnies all the time at school and on the bus! We'd bring two pairs of gloves to school so that we could keep both of our hands warm (one bunny requires two gloves so if you only had one pair of gloves one of your hands would be cold). I figure this isn't something southerners do so it's not something my kids will pick up in the school yard (unlike Jingle Bells, Batman Smells and other songs naturally perpetuated through generations of children), thus it necessitated parental intervention.

Rachel has since mastered her bunny-making skills.