Technically we've only missed two days of school—Friday and today—but church was also cancelled, so we've basically been "snowed in" all winter and now they've gone and cancelled school tomorrow as well. I don't really mind snow days; I just don't want to have to make them up later.

We only had three inclement weather days written into our calendar this year, anyway, which means we've spent them all on this one storm. I want to know whose brilliant idea that was, considering last year they called nine snow days.

Also, considering tomorrow's high is forecast to be 56°F (14°C, so basically a Canadian summer (okay, maybe not summer but definitely spring)). Actually, I really don't mean to whine about the weather too much because over all it's quite lovely. After all, who can complain about an average low of 0°C in January when one grew up in a place where January saw an average high of -1°C?

I love winter in the south.

Still, I find their reaction to ice comical (bordering irritating). It's something I don't think I'll ever get used to, not quite. My favourite part is when people try to tell me that ice is different in the south, that it's somehow more slippery–usually, they say, because it's warmer. I'm not sure that's the case because although ice storms aren't as common in Alberta (it's too cold for that) we have been known to have a few and, more to the point, we experience freeze/thaw all the time. Chinooks—a warm "snow-eating" wind—are a boon in the dead of winter. They send Canadians scurrying outside in short sleeves to soak up the "warmth" and act as a natural zamboni for outdoor skating rinks. Everything goes melty/drippy/gooey and then the chinook blows over and guess what the whole world is covered in? Solid ice.

And that's probably why everyone shovels their walks. And, I mean, sure we have snow plows and stuff, but we don't just send them out every time it snows. A minimum amount of snow has to fall. And by the end of winter everyone's driving on compressed snow/ice anyway.

On another note, my friend Bridget says they don't even bother shovelling (where she lives) in Finland.

I think there's something to that. If everyone thinks every step they take might cause them to fall, they're going to be careful all the time. Whereas in places with a 24-hour snow removal ordinance (it's technically criminal to leave your walkway icy) people expect others to ensure their walk is slip-free (which, let's face it, is kind of ridiculous) and are happy to blame others when something goes wrong. Probably something to do with the way health care works because somebody's got to pay those hospital bills when you sprain your wrist or break your leg or what have you.

Am I over thinking things? Probably.

Let's just say that being locked up for five days straight—for two measly inches of winter precipitation—is starting to take its toll. But it's fine. And I vowed not to complain (too loudly (at least on Facebook)) because everyone here seems to find this behaviour perfectly rational (while I'm thinking to myself, "If we waited for the roads to be completely clear of ice and snow before going to school we would never have gone"). Andrew called them "snowpologists" today. He always knows how to make me laugh, that one.

It's as if the south's solution to winter weather is "wait for it to melt, I guess."

I'm pretty sure it's going to be melty by the time we hit Canadian-summer outside.

So why couldn't we follow Chapel Hill's footsteps and called for a 3-hour delay rather than missing an entire day of school?

Anyway, we had an okay day at home today—I'm not going to lie: it wasn't fabulous, but we did have a bit of fun (and hopefully tomorrow will be a better day).

We went outside to make a snowman (of sorts) in the afternoon and ended up with a snow turtle because a whole man was proving too difficult. But first, here's Miriam throwing a snowball at me (pointblank range—what's up with that?!): 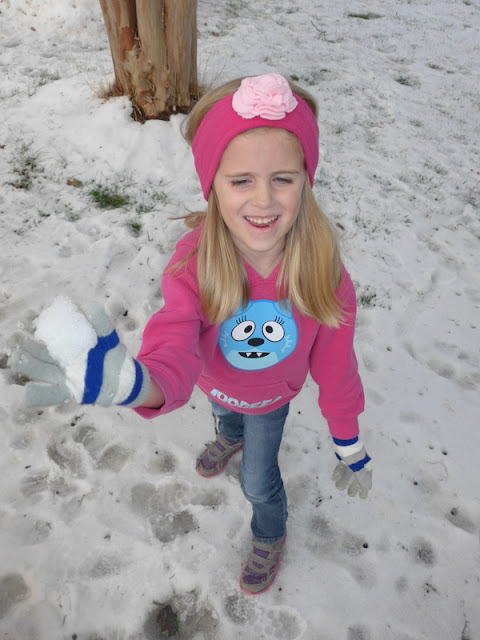 And here are the kids with the igloo they've been working on with the neighbourhood kids: 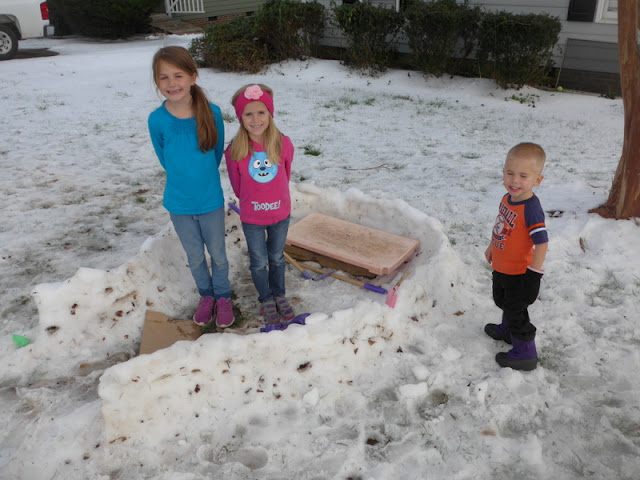 Benjamin's in a t-shirt, which is how you can tell it's super cold outside (I love you, North Carolina (just saying)).

Zoë came outside in her little exersaucer to watch us work and she didn't even get chilly: 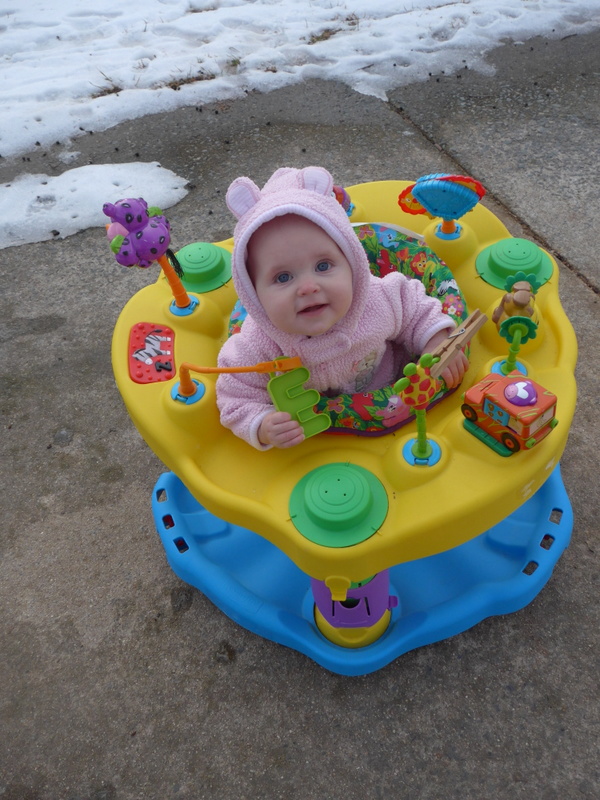 And here they are, at last, with their snow turtle: 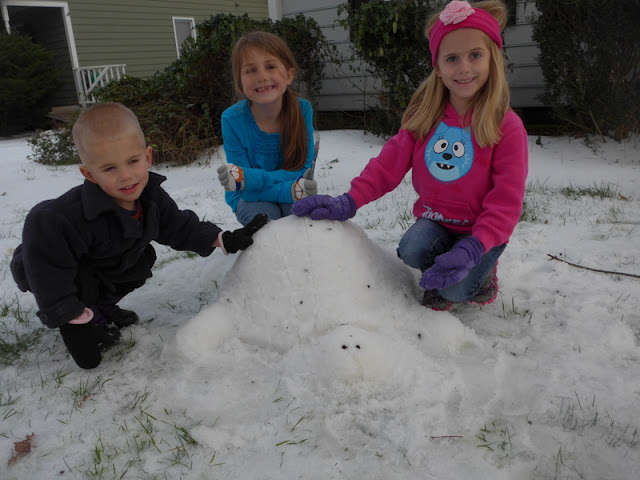 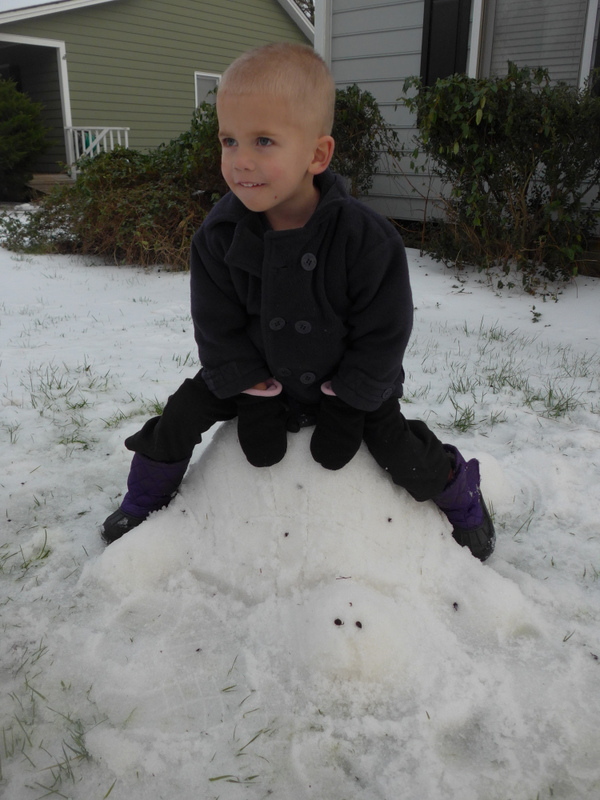 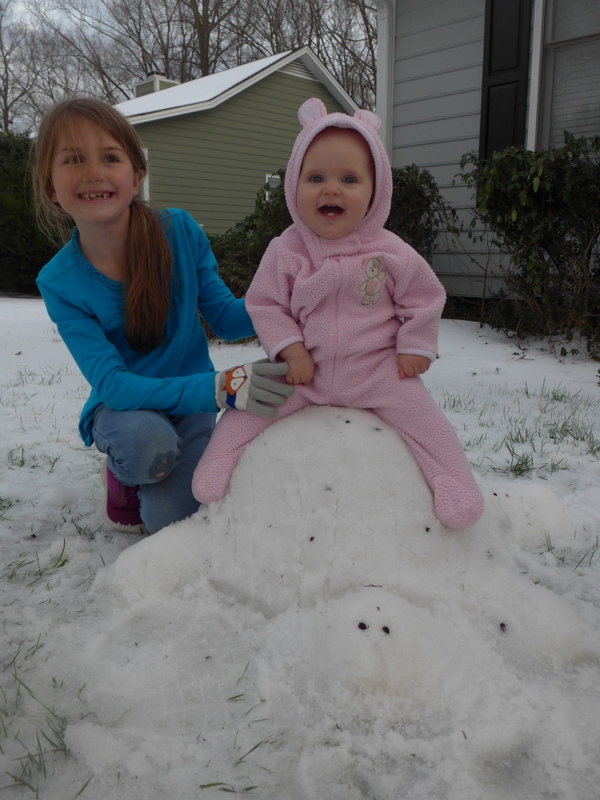 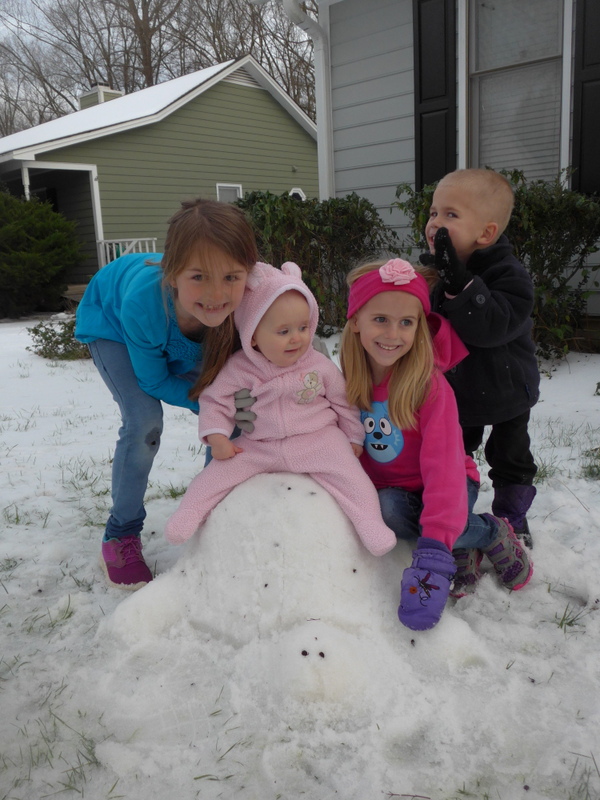 They're pretty cute, if I do say so myself. I suppose it won't be too terrible to be "snowed in" with them another day!
Posted by Nancy at 11:26 PM