Adjectives that describe me...

Benjamin brought home a paper from school yesterday listing adjectives that he thought of to describe himself: 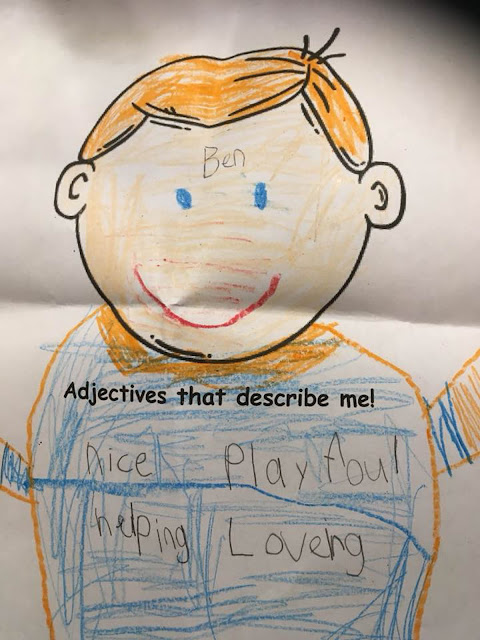 He says that his is nice, playful, helping, and loving. His spelling of "play foul" made me laugh, along with his explanation of why he's loving (he has a crush on a girl named Charlotte, so basically he's pretty loving). My favourite part, though, is that he so honestly (and accurately) described himself.


I think sometimes it's hard for people to describe themselves because they're afraid of coming off as arrogant or self-deprecating (this is true, at least, for me). Displaying your true feelings about yourself feels rather a lot like running around naked. But children, I think, have an innocent ability to be genuine (without coming off as conceited).

It was nice to see this introspective assignment from Benjamin, who honestly views himself as being nice, playful, helping, and loving. He's not bragging; he genuinely feels he's those things (and he is those things).

Last night we went on a family walk (sans the older girls who were at Activity Days) and Benjamin noticed a new hole in the fence by the trail (those vinyl fences are great...until they're not). They call the fence the fish fence because one of the holes in it looks very much like a fish. This new hole, however, was D-shaped.

Benjamin pointed at it and said, "Hey, look! D-fence! I just made a soccer joke!"

He was rather pleased with himself for coming up with an actually-funny joke.

And so I decided that it's alright for me to think I'm funny sometimes, too, and I made an actually-funny joke the other day as well, so I'm going to share it with you now.

For some reason we were talking about acronyms with the kids and GERD came up—I can't remember why because we weren't talking about reflux at all (maybe because it's something that the kids knew was an acronym)—and Andrew said, "That's gastroesophageal reflux disease."

"Yes," I cooed. "Benjamin was my little GERDy boy."

Then I turned to Alexander, who has suffered from gastroesophageal reflux disease and laryngomalacia, and said, "And you're my hurdy-GERDy boy!"

My children did not understand my joke but that doesn't make it any less hilarious even though I've heard that if you have to explain a joke there is no joke.

But, children, this is a hurdy-gurdy:

Now do you think my joke is funny? Because it totally is.