The other day when Riley was over, they (along with Benjamin) were in the backyard playing with the sidewalk chalk. I heard some funny scraping noises on the side of the house and looked out of the window to see those two three-year-olds had abandoned the sidewalk and were drawing on the side of the house, which isn't a terrible thing to do because it will wash off but it's best to be in the habit of drawing where one ought so I decided to intervene.

I opened the back door and Riley and Zoë leapt away from their graffiti.

"Who's been drawing on my house?" I asked in a silly storybook villain voice (like the troll from The Three Billy Goats Gruff or the witch from Hansel and Gretel).

"Not me!" they both said, each accusing the other with their little pointer fingers. 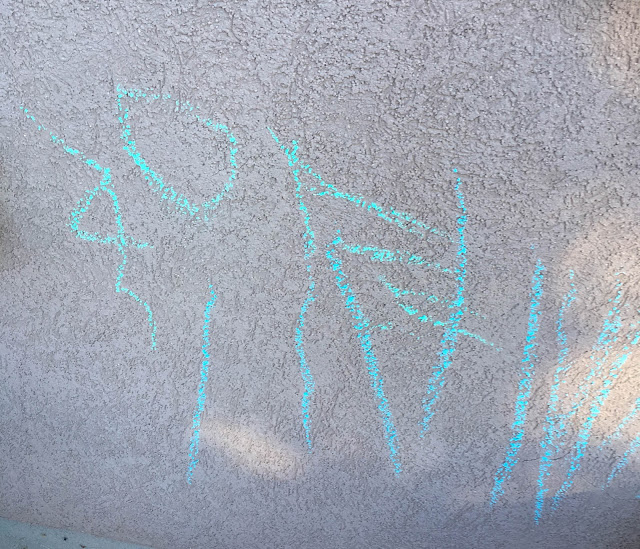 Unfortunately for Zoë, she's reached the age of self-incrimination because I'm pretty sure Riley didn't put that Z-O-E on the wall (though the series of vertical lines belong to him (if you look closely you can see that Zoë is written in green chalk and the lines are done in a turquoise colour (blue and green are actually rather difficult for me to tell apart and I always call things green that others think are blue or think things are blue when others swear that they're green so I dunno—those two colours are distinct in that picture, right? One of them is green-ish and the other is more blue (at least in my opinion))).
Posted by Nancy at 3:00 AM