A short disclaimer: For my purposes, regarding the 10-day fast from social media, I've decided that blogging isn't really social media these days. My readership is mainly family (because I'm really not that interesting and didn't think to ever hire an SEO, my blog traffic is mostly made up of crickets chirping in the night which actually makes this blog highly unsocial media). But I've deleted Facebook and Instagram from my phone and so far haven't logged on my desktop computer. So we're doing this.

Also, I promised myself I wasn't going to be one of those people who made a big, public announcement about starting their 10-day social media fast. Yet, here I am, making an announcement. It's just...my girls know that I'm participating in the fast and have been chastising me every time I touch a phone ("Mom turned on the white noise app on my phone last night," Miriam tattled to Andrew. "She's supposed to be off social media!" He had to tell her that a white noise app isn't social media and, as far as I'm concerned, neither is this blog (which very technically could also be called white noise)).

This evening we got together at my Uncle Bruce's SLC house for a family dinner since my Auntie Colleen and Uncle LeRon are in town for general conference and a mission reunion and all sorts of things. They're really quite busy so we were glad we could snag them for the evening.

Aunt Sara made a beautiful dinner for everyone, of course, and we gathered around the table to visit and eat. Josie joked to Austin that when Albertans get together they always talk about two things: the weather and death. And it's kind of true. They're unavoidable subjects. And it's not like we even are bored when we bring up the weather. It's simply a universally appealing subject in Alberta. Also...death and dying. We're an odd breed. 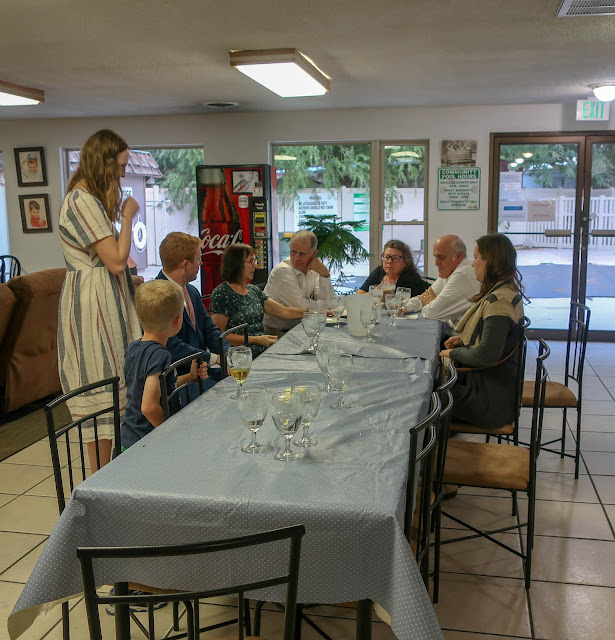 At one point we were talking about end-of-life care for my grandma and how she couldn't let any of her housework or hygiene go even though she didn't have the strength to lift a toothbrush. A sweet sister in her ward would come over to help her brush her teeth. She said at first she wondered how she could brush a grown woman's teeth, but then she thought, "Pearl is my sister and I can brush my sister's teeth." So she did.

My mom thought that was somewhat silly because my grandma knew she was dying—so what did her teeth matter?

"Can't show up at the pearly gates with cavities!" someone quipped.

Though, honestly, I'm on my grandma's side here. I can't stand skipping brushing my teeth.

My grandma also wanted my aunt to sort a stack of newspapers, being sure to clip the articles she had been marking (for quite some time). "Surely it doesn't matter if they're clipped out," my aunt protested. "I mean..." My grandma was dying.

"It matters to me," my grandma insisted.

And then we had to share some of the last words my grandma ever said to my mother: "Myrna, will you please sweep the floor?" Of course my mom said she would, and she did. Then she reported back to my grandma who thanked her and then instructed, "Now sweep it again."

She was infamous for always sweeping the floor twice. I actually wrote a poem about that once, which, by your leave, I will share (to no one in particular because this isn't social media (am I doing this right?)):

“Sweep the floor,” my grandma said.
And so I swept the floor.

“Now sweep again,” she parroted.
And so I swept it more.

And though she’s long since left behind
This toilsome earthly heap,
My soul is not bereft; I find
She’s with me when I sweep.

My house is now most feebly swept
By child-driven brooms,
Which leave behind crumbs (I suspect)
And dust flecks in each room.

I gracefully ignore the grime
But hear Gram’s spirit blurt:
“You can sweep the floor two times
And still you’ll pick up dirt!”

Anyway, the best part of the conversation was when my Auntie Colleen was telling about when my grandma was getting really weak (I should say that she died of liver cancer at home (her choice); it was a very painful (though relatively fast) way to die) and could no longer lift herself to a standing position, one of the neighbours approached my aunt and said, "You know what the solution is, right?"

My aunt did not.

My aunt was momentarily horrified until the neighbour explained that he had meant she needed a power-lift recliner. But when my aunt said electric chair, you should have seen Austin's face falter. He had momentarily panicked just hearing the story—he married into a family that talks about putting their grandma in an electric chair!!

Fitting into a new family is a big, scary thing. Especially when they're all a little bit quirky.

Speaking of, here's my mom explaining to me how one would have to jump into a group picture back in the day. I calmly explained to her that cameras these days give you a full ten seconds (and can also be programmed to your phone so that you can see what the camera sees from your phone, along with taking the actual picture...but we don't have that set up on this camera yet): 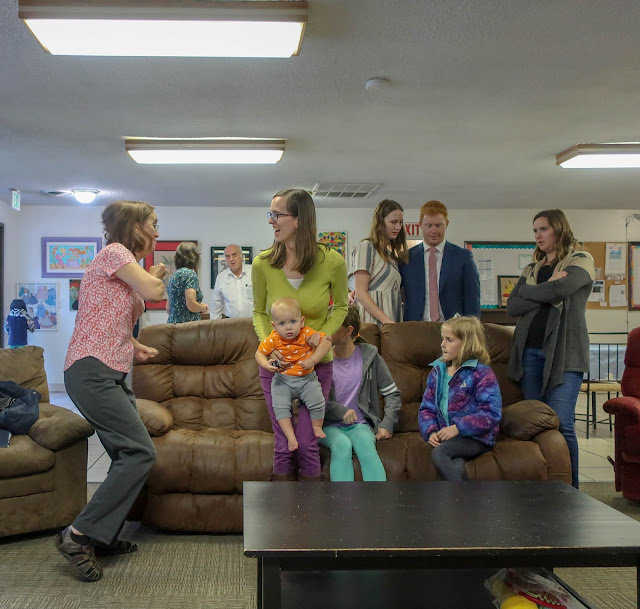 Here's a shot of our family at our little gathering:

Kelli and Allen walked in just after we'd finished taking our group picture, so of course we had to reassemble to take another one (that was another thing my grandma insisted on: gathering everyone together for a photograph every time we got together):

We didn't just talk about death. We also talked about the weather a lot and whether or not Rosie should take Austin up to Canada for the first time...in December. Winter weather is terribly unattractive. I understand that snow is considered pretty by many (sometimes I might even agree with you) but the temperature is bound to be most unpleasant.

My aunt talked about learning to drive the combine in the snow—for harvest at the end of summer. We talked about years it snowed at least one day every single month (the first year we lived in Alberta (after moving from British Columbia at the end of 1994) it did this). We talked about babies being born in spring blizzards (my cousin Michelle was one of them; my aunt was in the middle of getting all the laundry done before heading out to have the baby when the power went out, so she wasn't able to finish the wash and her mother-in-law went ahead and did it for her. "Never let your mother-in-law do your laundry!" my aunt said. But, honestly, my mother-in-law has done my laundry a couple of times and it's not so bad, but I'm also not at all particular about laundry).

It was so nice to visit and be surrounded by my tribe for a bit. I think everyone craves that every now and then. Andrew spent most of his time wrangling the children (who I hope were also listening in on our conversation), but I was alright with that because we had his family over for lunch between sessions of General Conference yesterday and he slept through the whole thing, leaving me socialize with his family all on my own (in his defense, he was feeling under the weather; also I love his family and don't mind visiting with them, but still...I thought it was altogether fitting and proper that he facilitate my family visit by entertaining our little ones).
Posted by Nancy at 1:34 AM