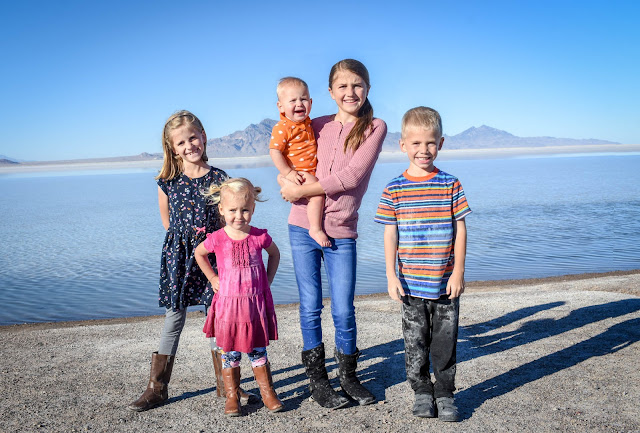 At first we were going to take family pictures on Saturday but then we decided we wouldn't because we hadn't decided on a location or a wardrobe or anything and we were running out of time to make such suggestions. But then Rachel suggested that we take family photos at the salt flats and this Saturday was the only date available for such an outing for quite some time so we decided we'd go for it.

It was quite the adventure, that's for sure!


We'll have to go back sometime when we're not trying to look pretty because the kids, particularly Zoë and Benjamin (the older girls showed remarkable restraint and Alexander would have if he could have but he can't walk yet so we mostly just carried him), sure had fun getting ridiculously dirty. They surely would have gotten even more dirty had they not been trying to stay clean.

Our first stop was the rest area at mile marker 11 on I-80, which was a fabulous stop, indeed. They have restrooms and a foot rinse area, both of which we definitely needed. The water was surprisingly warm and Zoë and Benjamin splashed on in without hesitation (basting themselves with briny water, which would then evaporate, leaving them encrusted in a thin layer of, essentially, table salt).

I had brought a spare outfit for Benjamin.

I should have brought extra clothes for everyone.

Clearly we did this wrong because I don't know how all those other people managed it. But we went ahead and took pictures in spite of our veneer of salt. It will make a good memory one day, right?

We tried for a group shot at the rest stop before heading to the state park itself (which is at mile marker 4, but you have to make sure to hit the rest stop before visiting the state park because there's literally no way to get back to it without driving an hour out of your way to turn around). We had a terrible time getting the kids to cooperate. Zoë and Benjamin were simply too darn distracted by the whole experience to look at the camera. And when they did they were usually making goofy faces or closing their eyes. It was rather frustrating. We didn't get a single group picture (of either the kids or our whole family) where we all look decent.

The top image is a mix of the three outtakes below...


It's going to take quite some time to finish editing these pictures, but hopefully it will be worth it in the end (and hopefully it doesn't take too long). I'm still debating whether we should force another (slightly less-messy) photoshoot on the kids before it's time to send out the Christmas newsletter (which I need to start writing)...