On Friday Benjamin's writing prompt during literacy centers was, "What are you looking forward to this weekend?"

This was his answer: 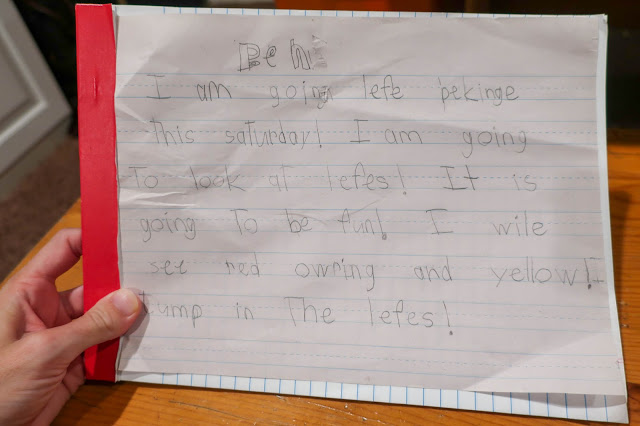 It says: I am going leaf peeping this Saturday! I am going to look at leaves! It is going to be fun! I will see red, orange, and yellow! I jump in the leaves!

After reading that how could we not take the kids on a little foliage tour this weekend? I mean, I had mentioned that we should go leaf-peeping before the leaves all drop but I hadn't necessarily meant this weekend (which turned out to be a little busy—but when is life not busy these days?), but we didn't want to let sweet Benjamin down when he wanted to do such a simple thing.


We drove out to Bridal Veil Falls up in Provo Canyon and walked along the river trail there, enjoying the beautiful fall weather, the colourful leaves, and each other's company (so it was just about as quaint as leaf-peeping sounds). 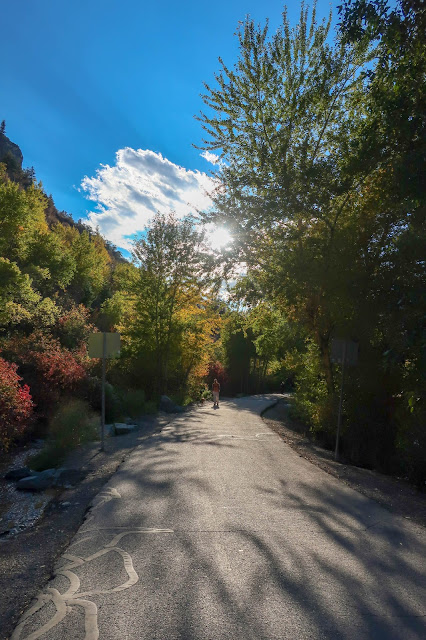 The kids, east-coast snobs as they are, weren't too impressed with the leaves at first since many of the trees were still green (and nothing quite compares to leaf-peeping in the Appalachians (though the Rockies will always be in my heart)), but they soon began to find signs of autumn:

They were all quite excited when we made it to the waterfall. Here's Zoë saying, "I would need a hiking buddy to get way up there!" 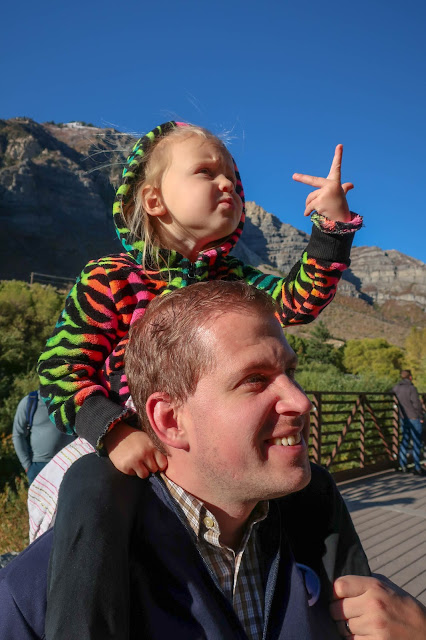 And here's another shot of Zoë and Andrew with the snow-capped mountains behind them: 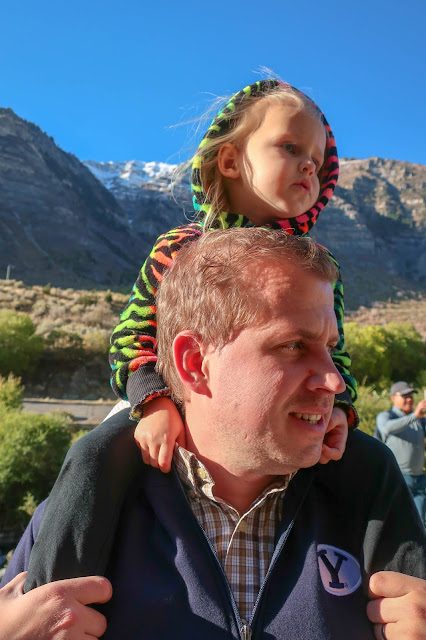 The kids had fun hopping across the rocks at the base of the waterfall:

Rachel was Zoë's hiking buddy and did her best to help keep Zoë's feet dry (though ultimately their attempt was in vain and Zoë ended up soaked): 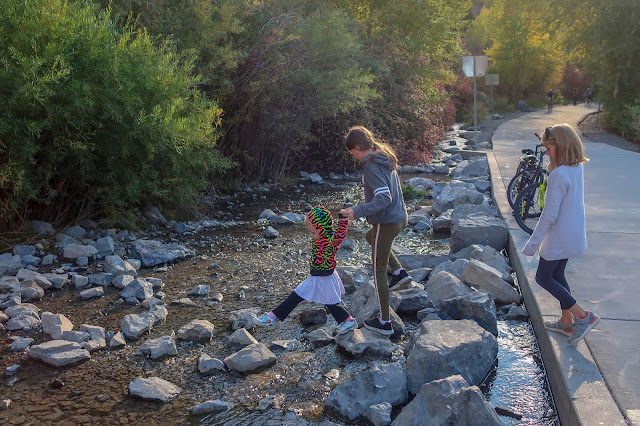 Here are the girls beneath the falls: 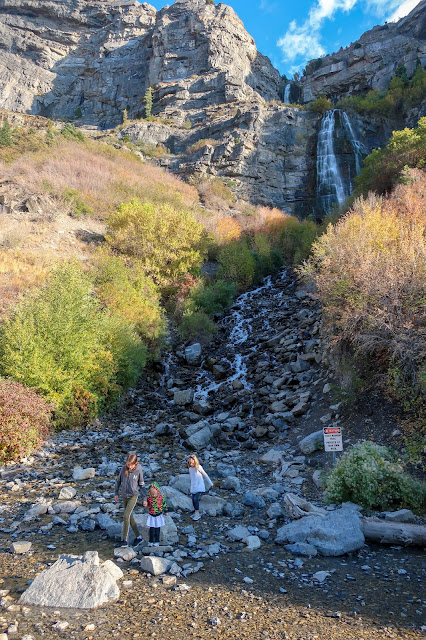 Benjamin was, similarly, unafraid to get wet. 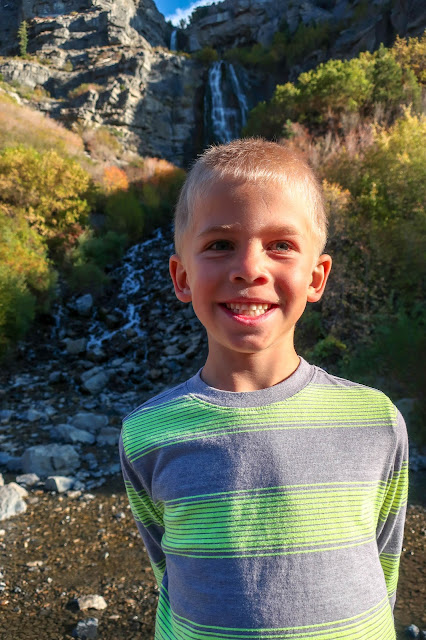 Once he fell into the water he gave up trying to stay dry altogether and instead started splashing all around, jumping off rocks into the water and so forth. He was being so bold that crowds of people were staring at him (because the water was freezing; I'm sure they all thought he was crazy). 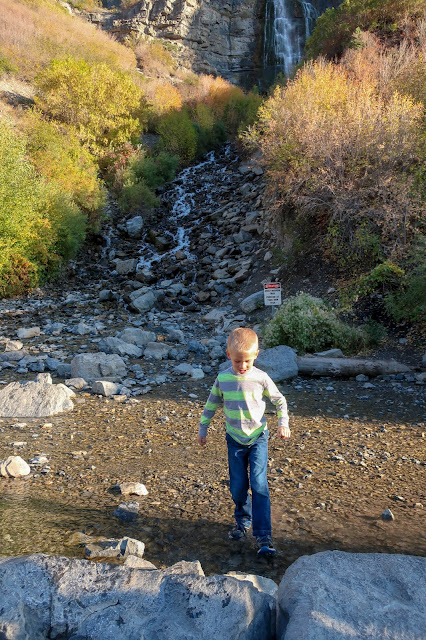 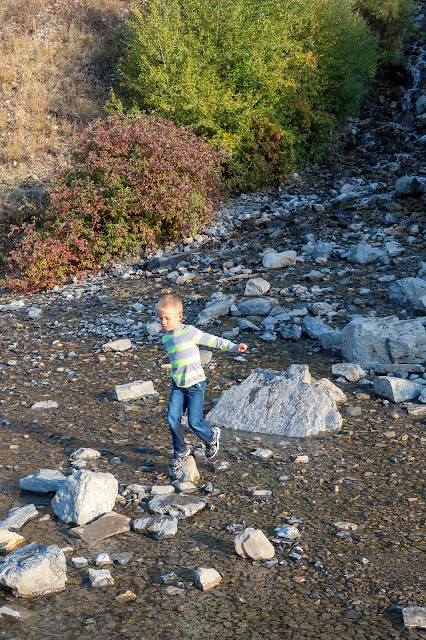 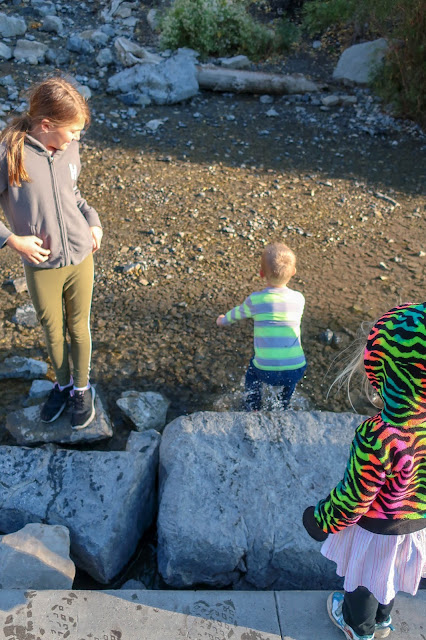 He didn't realize how cold he was getting until he stopped playing and then he immediately regretted his rash behaviour (we did warn him; he just didn't heed our warnings (I had also told him to bring along a sweater, which he said he wouldn't need because it wasn't very cold today. I said, "Benjamin, we're going into the canyon where it's colder. Plus, I'm your mother and when Momma says to grab a sweater, you grab a sweater! You don't have to wear it but you have to have it with you." Naturally he ended up with no sweater to wear; I even went back into the house before we left to grab a sweater for Zoë and he said nothing about not having a sweater (his loss))).

He didn't pout too long, though, and started playing hard to warm back up. 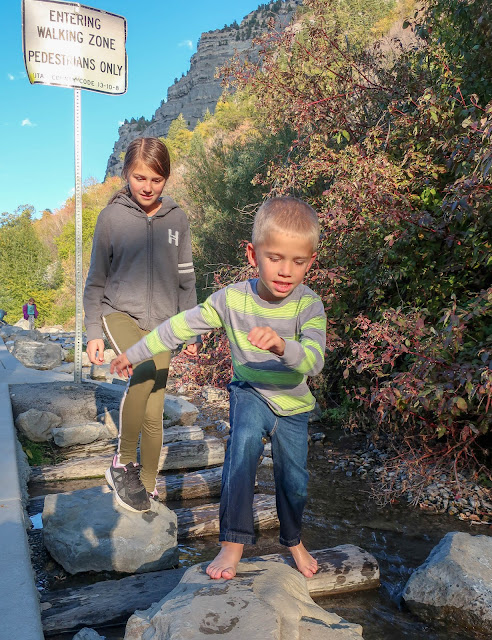 Here's a picture of me snuggling with my sweet little mushroom-eating, everything-climbing, nap-skipping 364-day-old boy: 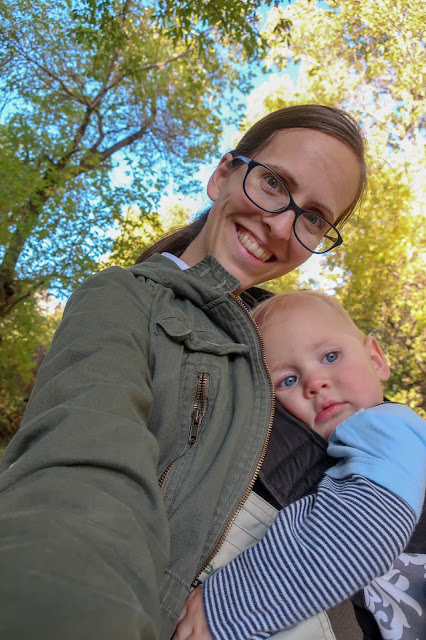 He'd only taken a twenty-minute mid-day nap (and had a little cat-nap in the car) so he was feeling rather sleepy by the time we were getting ready to head home.

Miriam, on the other hand, was not. 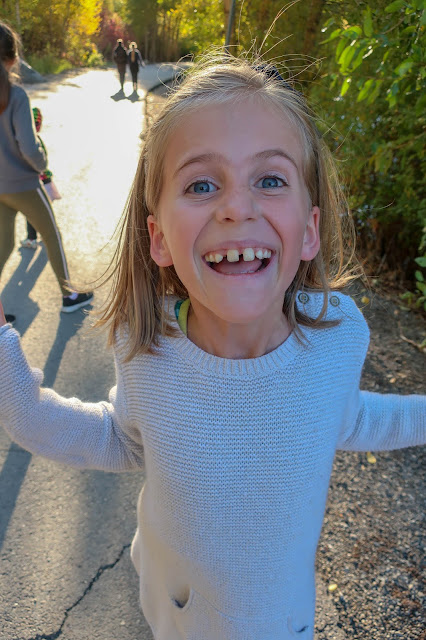 Zoë insisted on being the leader all the way to the parking lot because she "never" gets to lead. She has been very obsessed with all the things she never gets to do lately. The top of her list is praying even though she, by far and away, says the most prayers in our house (because she always cries about never getting to say the prayer and we let her pray just to keep her from carrying on). 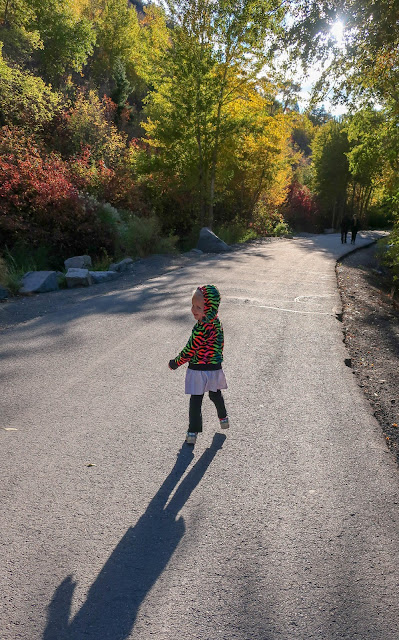 When we were mostly alone on the path, I had everyone in front of me stop for a picture. Some of us had a little more trouble stopping than others, but that's fairly normal. It can be a real challenge to get Benjamin to keep both his feet on the ground and this picture illustrates that fairly well. He's always bouncing around... 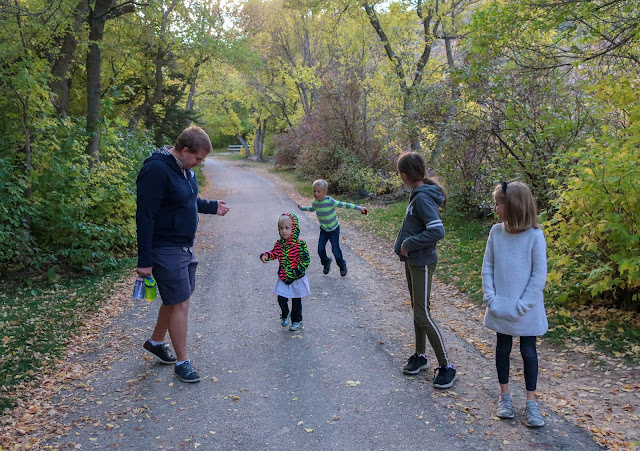 But here they are, all standing still! 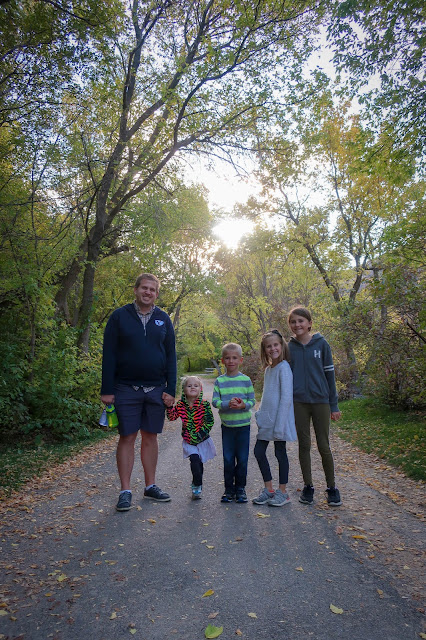 And here are a shot that I took of our whole family using the self-timer and setting the camera on the ground (it's not the best picture, but it exists, so here it is): 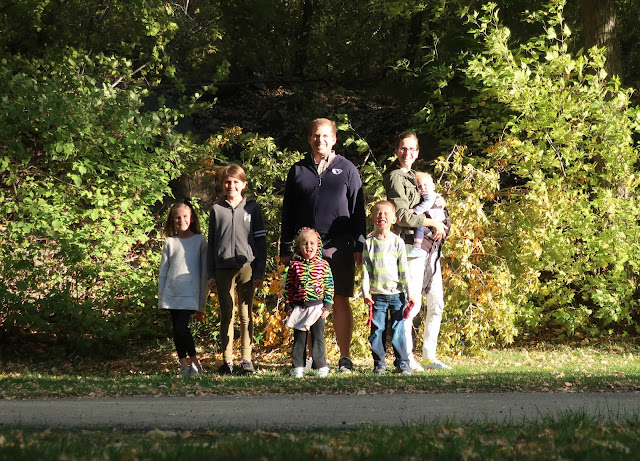 The kids insisted on also taking a funny shot: 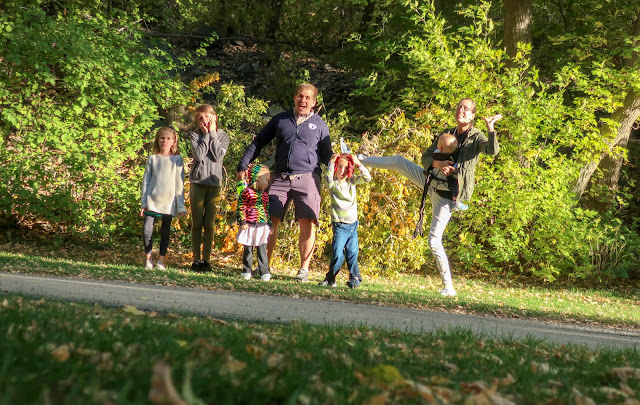 Benjamin wanted to do a close-up of his funny face: 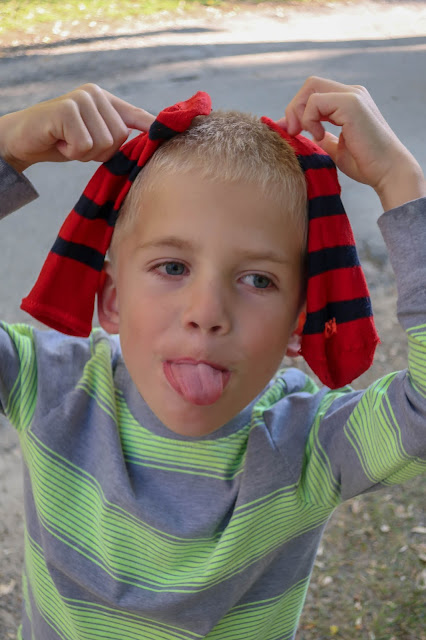 We'll have to do some more leaf peeping over the next few weeks, though already we're coming up on trail closures (Bridal Veil trails officially close on Halloween, I believe) so we can't put it off too long!
Posted by Nancy at 3:23 AM