This morning we went to Jaker's Pumpkin Patch with our neighbourhood co-op preschool. Part of me always feels a little guilty when I go do fun things while the kids are in school, but it's only fair to the little ones still at home that we do, right? After all, when my big kids were the little ones we would go out and do fun things! 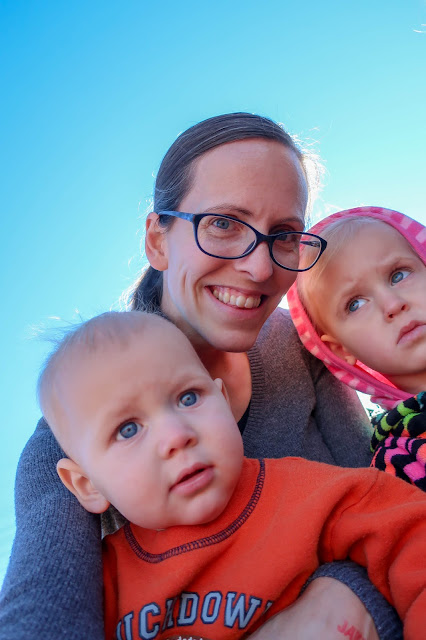 I knew that Zoë would have fun because we were going with all her little friends and because the activities seem particularly geared to preschoolers, but I was surprised with how much fun Alexander had! He wasn't particularly fond of the hay ride: 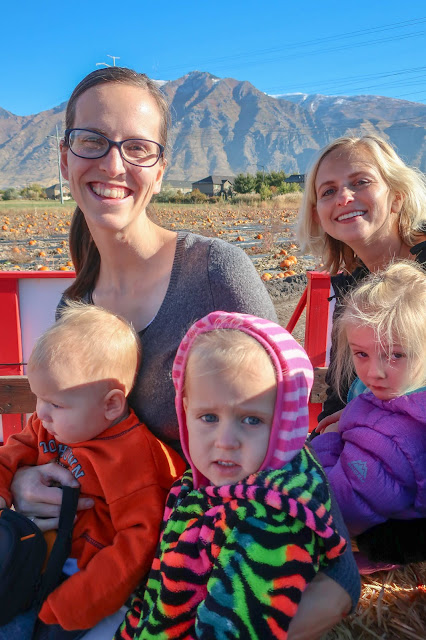 But the corn pit?
Alexander loved the corn pit so much! He didn't ever want to get out and would almost leap out of my arms whenever we walked past one (there were several different pits to try) so we mostly migrated from corn pit to corn pit. 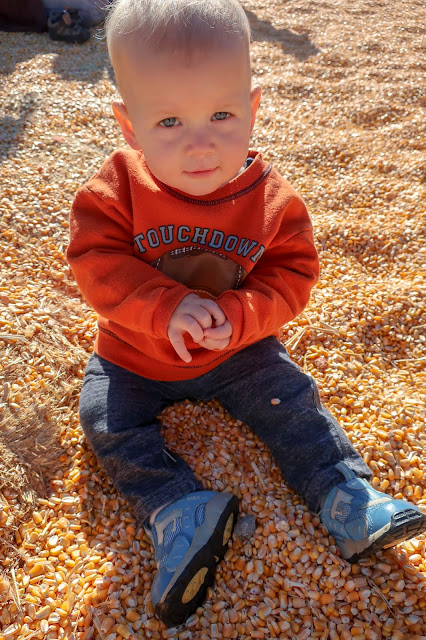 He loved to show me all the things he found—a kernel of corn, a fruit snacks wrapper, someone's sock, a tortilla chip (?!). He'd dive in and crawl around and then raise up his hand with some new treasure. It was so sweet (and sometimes a little disgusting (but I'm sure allowing thousands of kids to crawl around in the same pile of corn for a full month is perfectly sanitary)).

Zoë also enjoyed the corn pits (but she liked other activities, too). Here are a few more pictures of Zoë and Xander playing in the corn pit together: 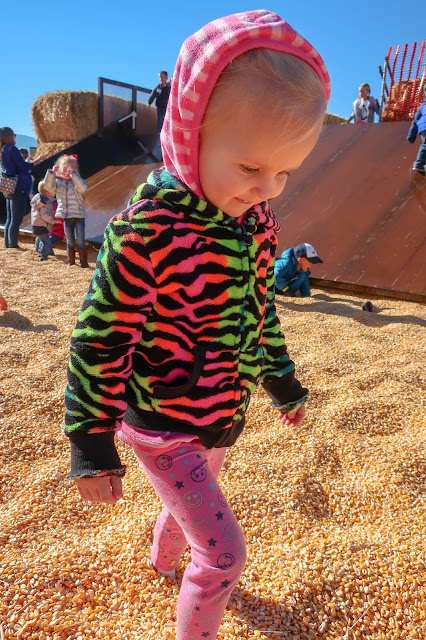 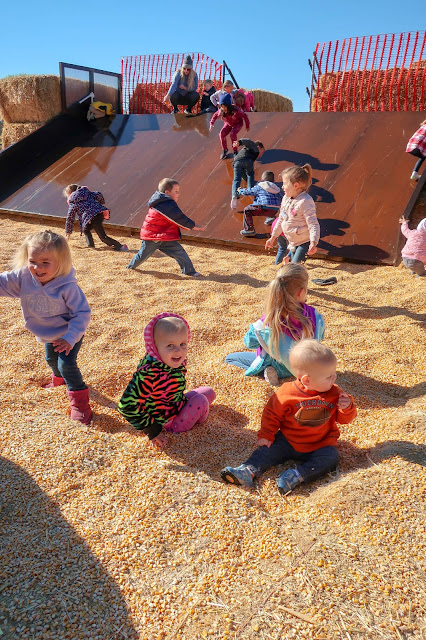 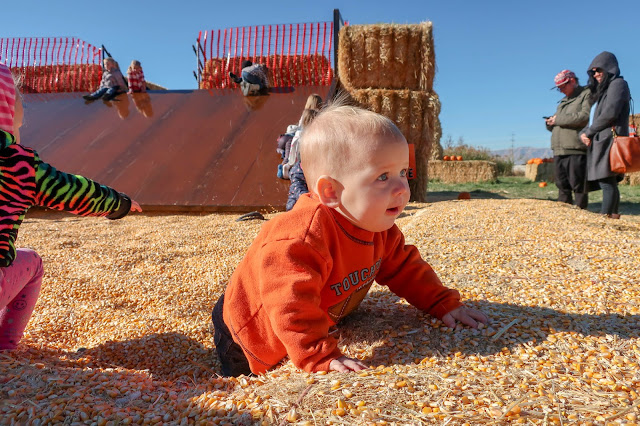 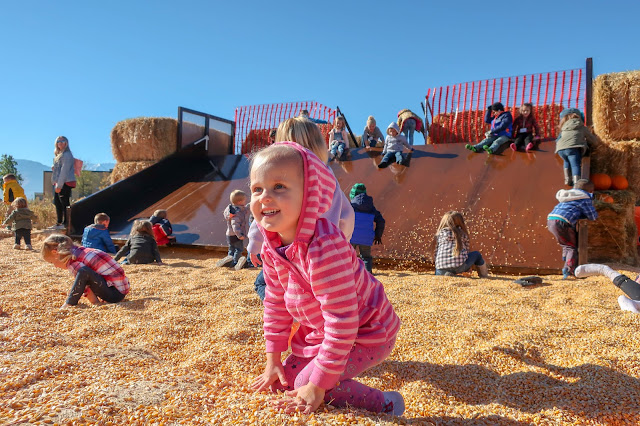 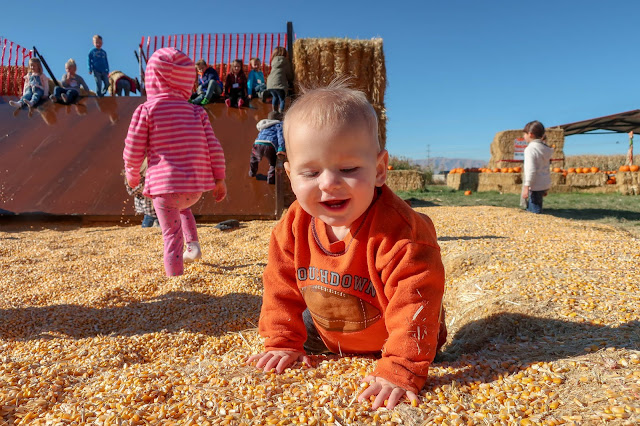 And here is the picture that pretty much sums up their relationship thus far: 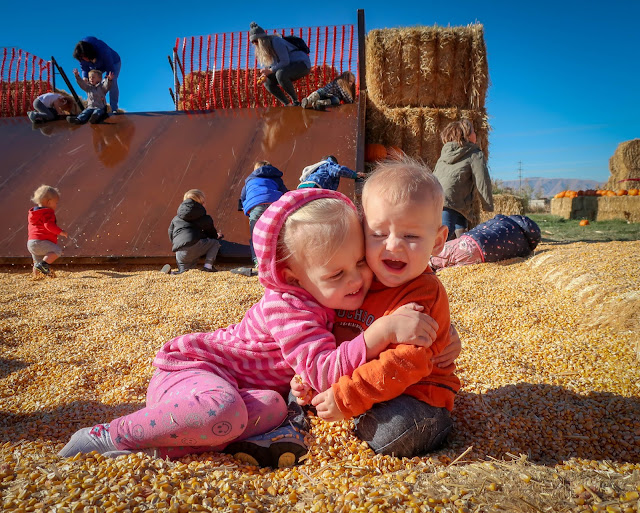 We managed, at some point, to corral all the preschool kids together for a picture. You can't really see Zoë in this picture because Alexander, who is just about her size, is sitting on her lap: 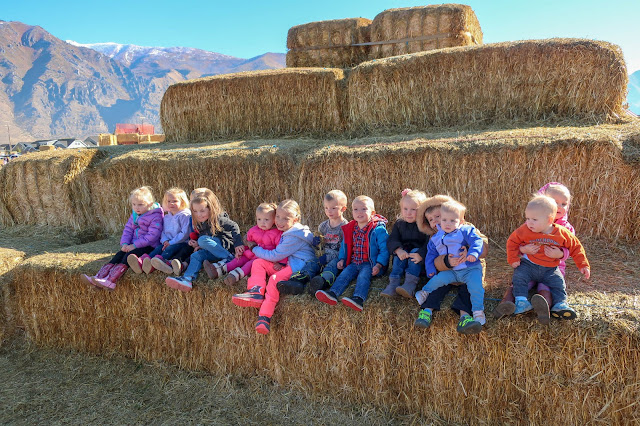 But here she is peeking out from behind him: 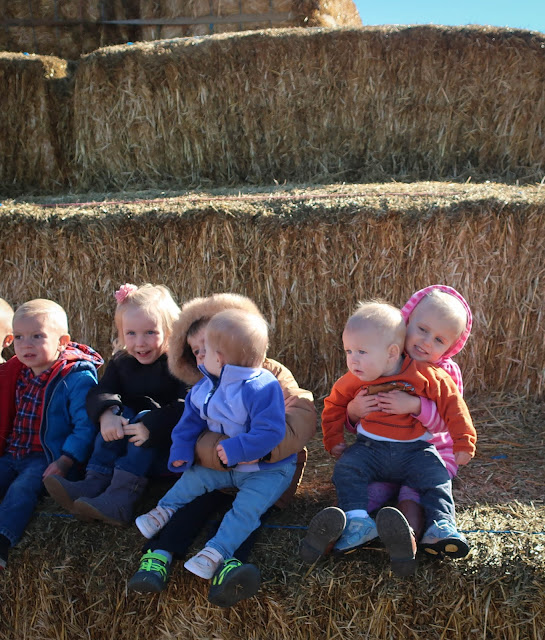 Zoë enjoyed watching the animals at the "Boo Zoo." I didn't get a picture of her with the llama because he was a rather uncooperative llama, but when someone mentioned going to the petting zoo "to see the donkeys and the llama," Zoë perked up and said, "I love llamas!!"

This funny donkey kept rolling around in the dirt, which the kids thought was hilarious. 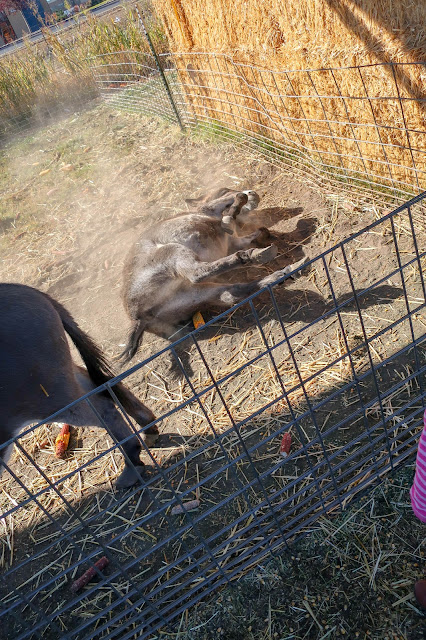 Here she is petting this fluffy...goat? 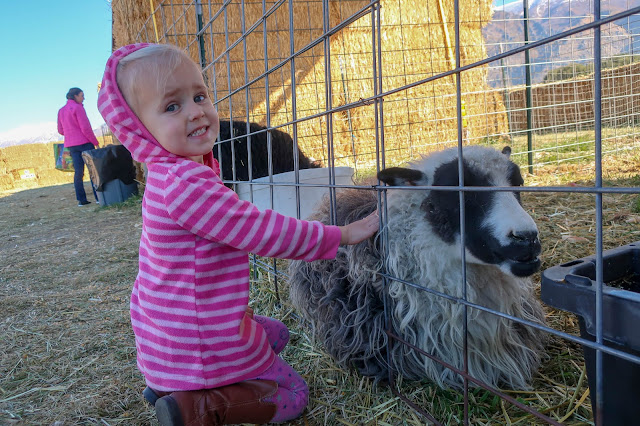 This sweet lamb wanted some attention from her momma quite badly. She kept jumping on her and nudging her with her nose. Momma sheep wasn't having any of it. 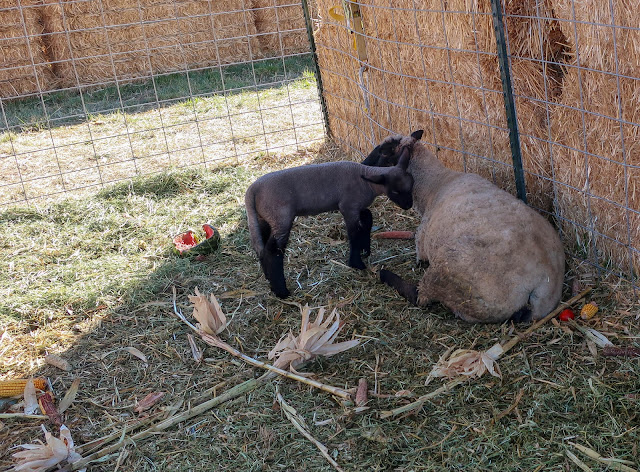 Zoë (now in the pink-striped hoodie) and her friend Hannah went through the short maize maze together: 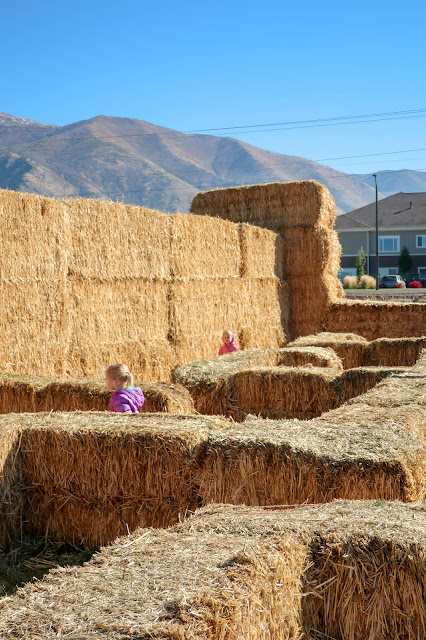 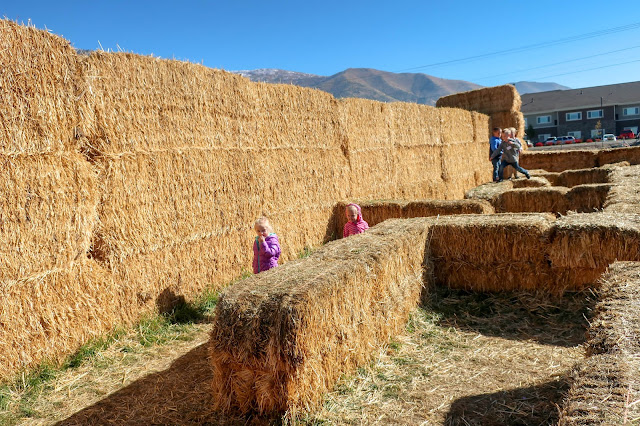 There was a haunted hallway that Zoë very bravely went through about a dozen times. It wasn't terribly spooky but spooky enough for a three-year-old: 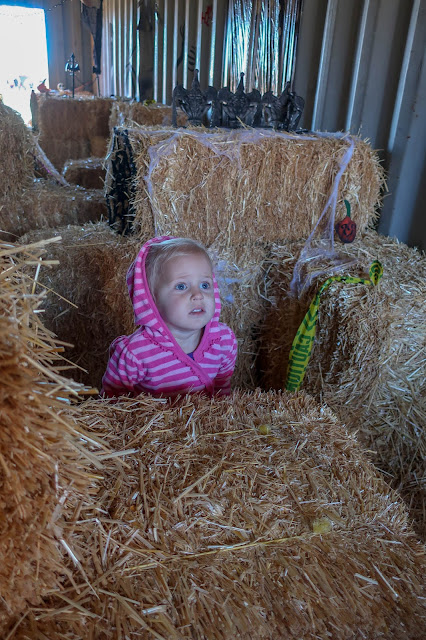 She tried some other slides but found there were too many kids to compete with, so instead we visited another corn pit. I thought it was funny how all the kids were playing in the sunshine (it was too chilly to spend much time in the shade). 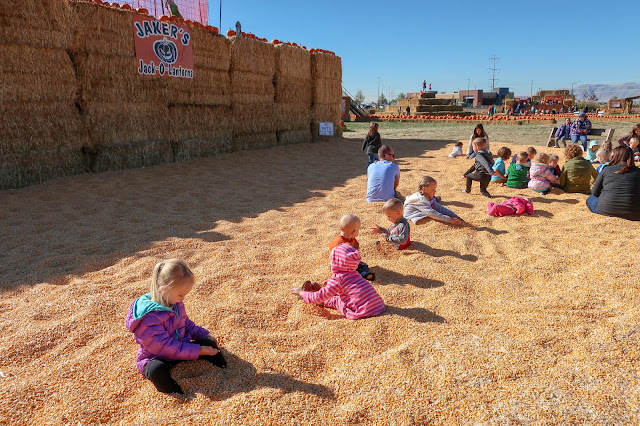 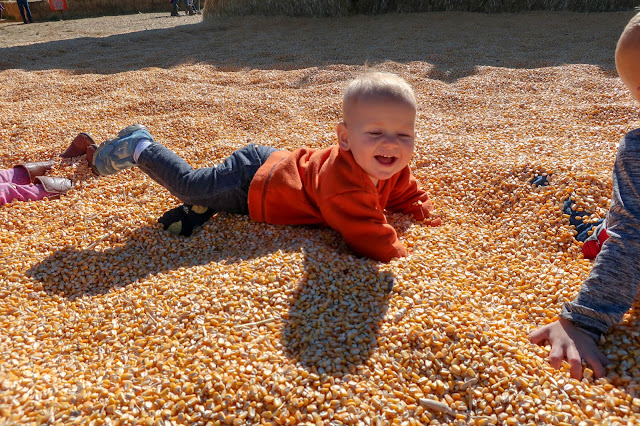 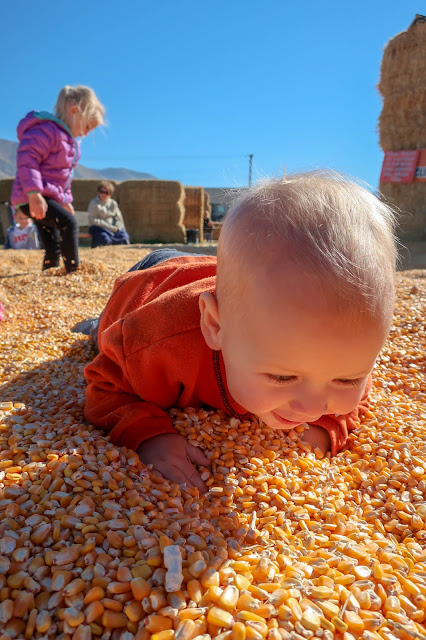 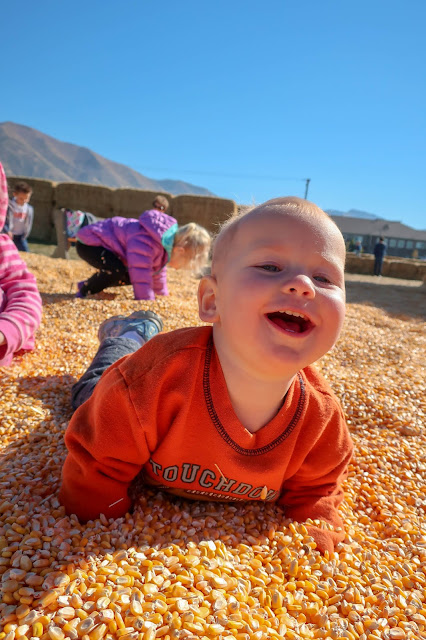 And here he is goofing around with Zoë: 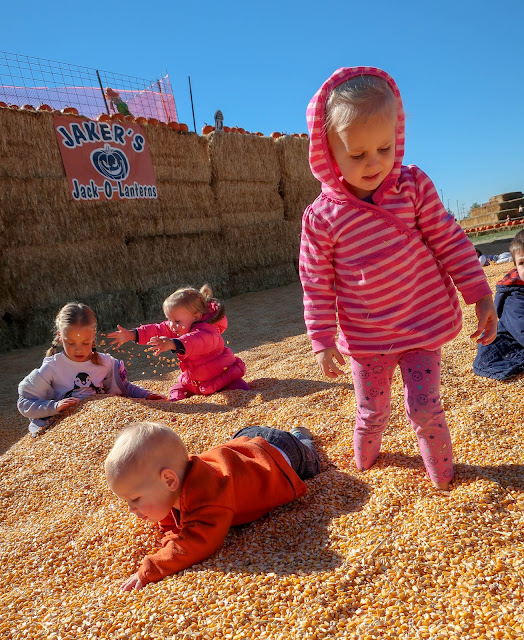 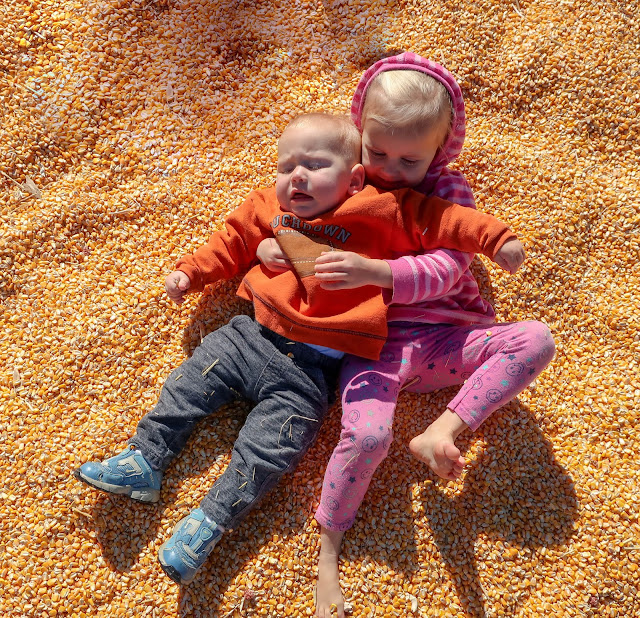 And here's Zoë goofing around by herself: 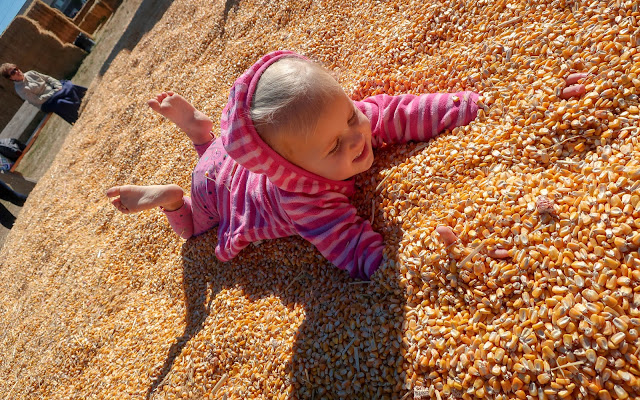 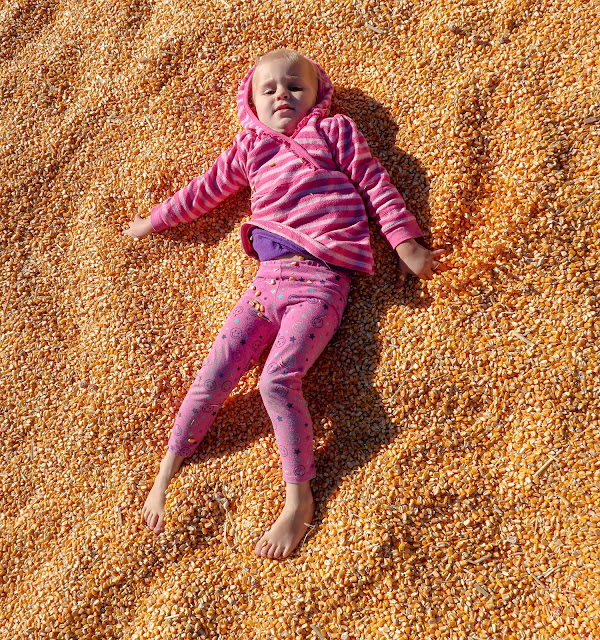 I tried to take a selfie with him in the corm pit but he was more interested in trying to shove corn in my mouth: 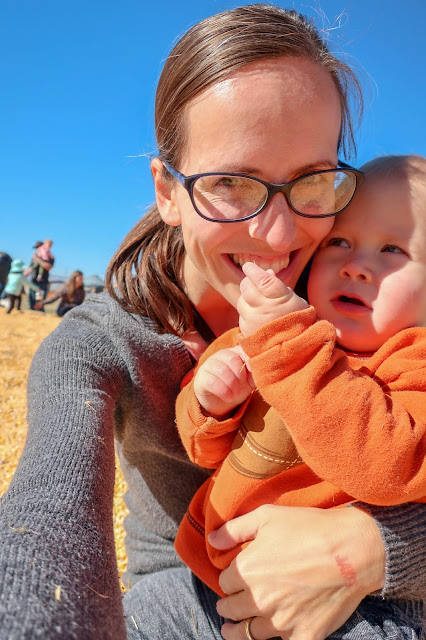 And when that didn't work out for him he decided to try to feed it to himself: 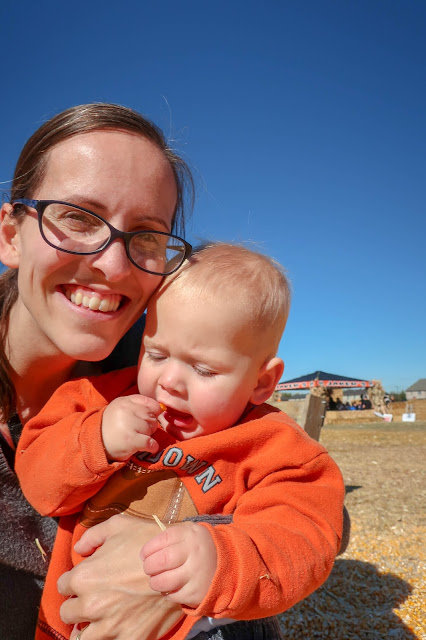 Oh! I finally got a smile out of him: 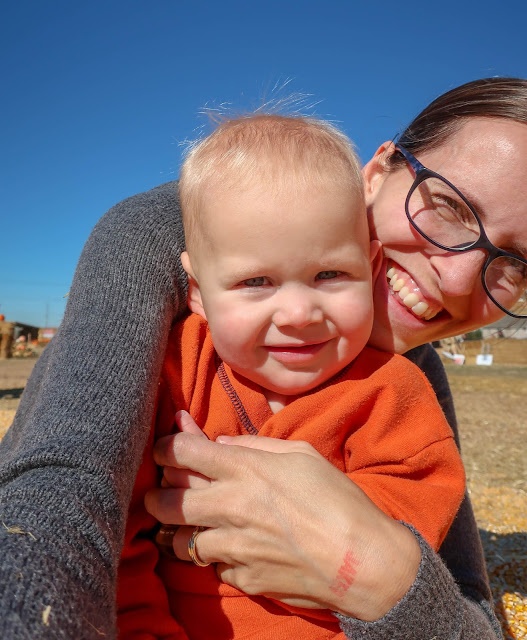 Here's Zoë with her friend's little sister, getting right up in her face, and saying, "Hey! This baby likes me!" 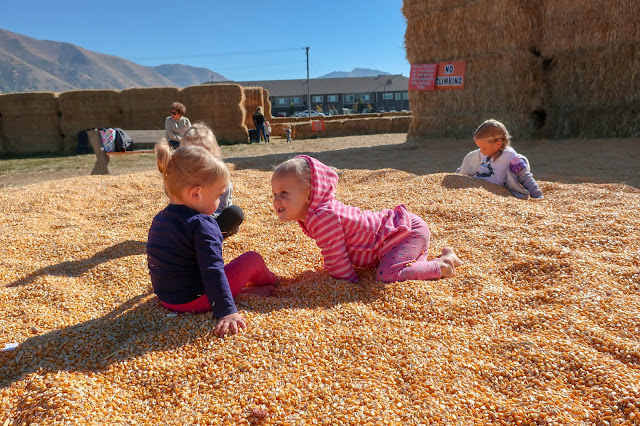 And here she is burying her legs: 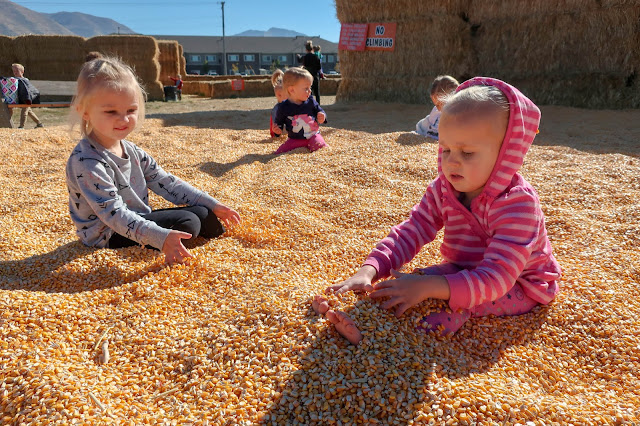 And in case you need video documentation of how much fun these two were having: