To really switch things up for spring break, we decided not to go to the pool today and instead hung out at BYU. How is spring break going, you ask? Well, we went swimming on Saturday, Monday, Tuesday, and Wednesday.

Andrew was out of town Thursday through Sunday last week—so our friends April and James invited us to hang out at the pool with them and it was the best idea ever and I'm so glad they got us out of the house. The kids enjoyed it so much that we've just been...going and going and going...even though it's super crowded because it's spring break.

So really spring break has been a bit of a dud.

Yesterday was so ridiculous that I didn't even see Andrew at all (at least not technically). He left the house before anyone was up because he teaches an early morning class on Wednesdays. He also teaches an evening class on Wednesdays up in Salt Lake, which he commutes to on the train because we're forward-thinking environmentalists. Last night his train broke down and was stalled for an hour on the tracks so he didn't get home until after midnight (which is technically Thursday, not Wednesday). It was a long day.

And then he left this morning before anyone got up.

Miriam had to get to campus for her organ class, so we decided that we'd all just go have a museum day and then leave her there for her class. We met up with Naanii and Auntie Josie, which was fun! We walked through the MOA and then visited the Museum of Peoples and Cultures, which currently has a lovely exhibit on the Middle East with some very beautiful costumes displayed. 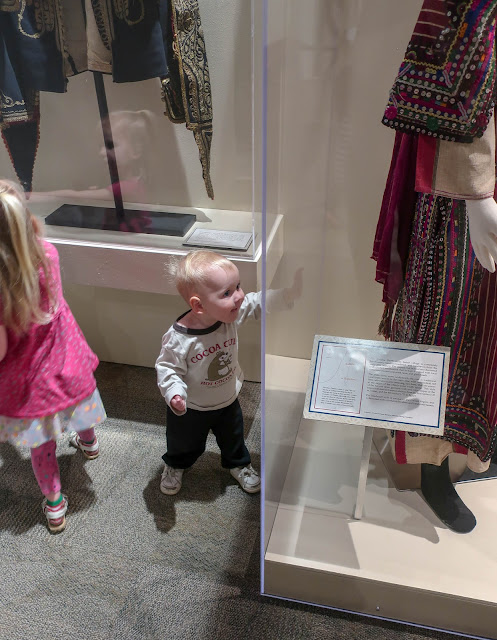 And then we went where the kids really wanted to go: The Bean Museum!


We got to pet a (stuffed) penguin today and it kind of blew my mind because it was way fluffier than I imagined. I mean, I know that penguins are birds and that they have feathers but I always imagined their feathers were...rubbery...but they're not! They're so super fluffy!

Here's Rachel reaching out to pet a (stuffed) owl: 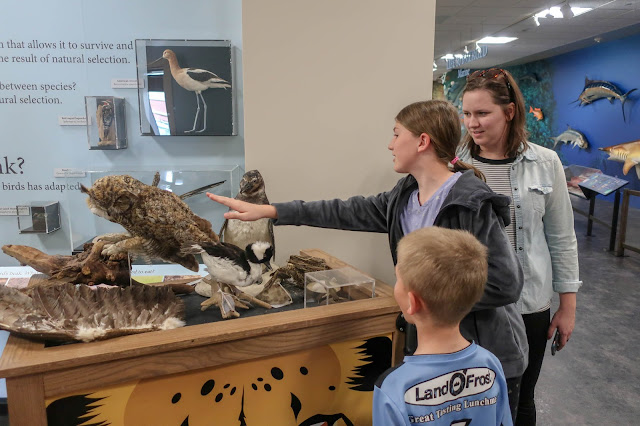 Alexander very adamantly demanded a turn at touching everything and then was so visibly pleased once he got his turn. It was very cute (I should have taken a video or something, but I didn't). He's also recently started answering "Me!" any time he hears someone ask a who-question. It's like he knows he's the fifth wheel and is likely to be overlooked or something.

So when Rachel said, "Who wants to be eaten by the lion?" Alexander quickly raised his little hand in the air and shouted, "ME!"

Zoë just wanted to be sure to ride the elevator, which is gigantic. When Naanii pointed out it was about as big as their bedroom they thought it would be a good idea to pretend they were in bed. I tried to convince Alexander to lie down on the floor as well, but he doesn't quite trust elevators yet so he wouldn't do it: 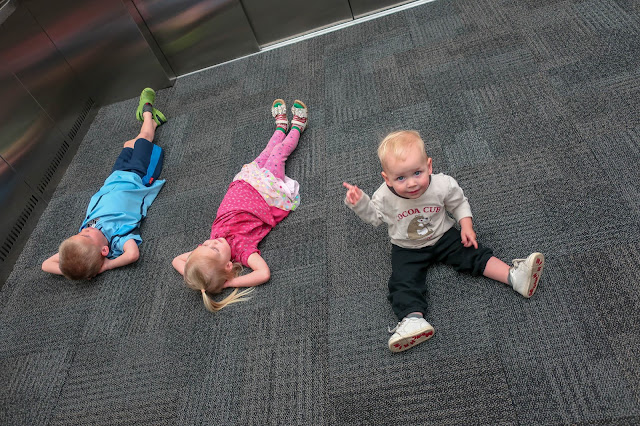 Here's everyone (except for me) in the lobby of the museum (over and over again because they're just too cute): 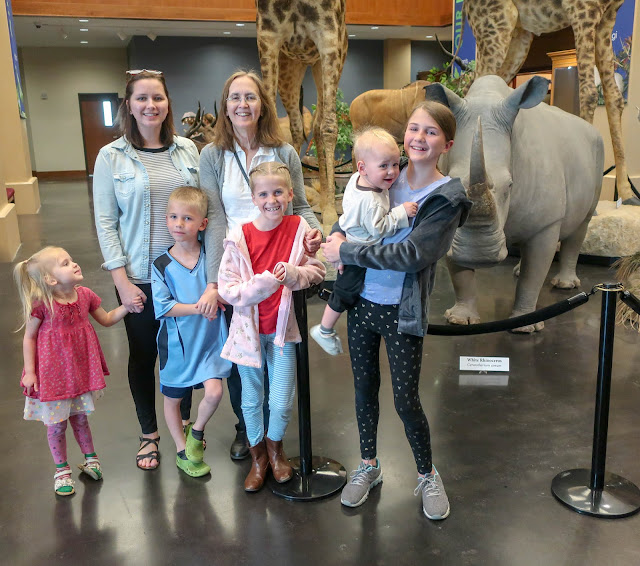 Zoë has been practicing rolling her tongue and finally figured it out just a few days ago (so now Benjamin is the only one who can't do it) and decided this was the perfect time to show it off: 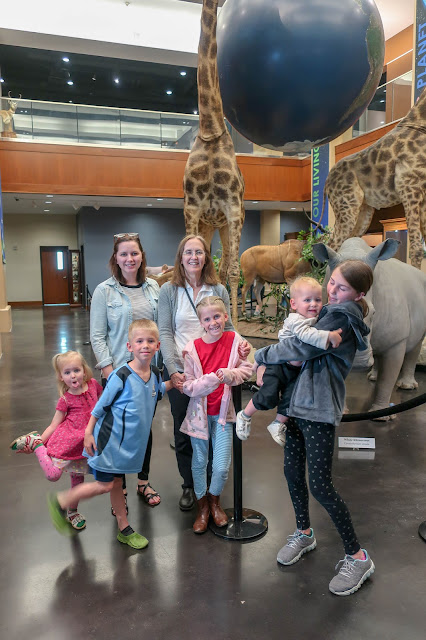 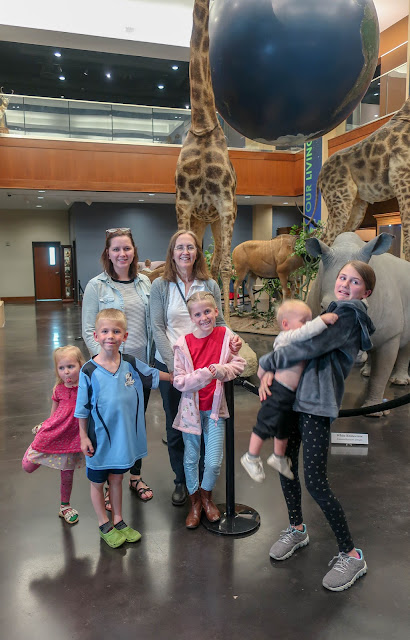 I also love how this trio of pictures shows how anxious Alexander was to get down and roam. Silly boy! 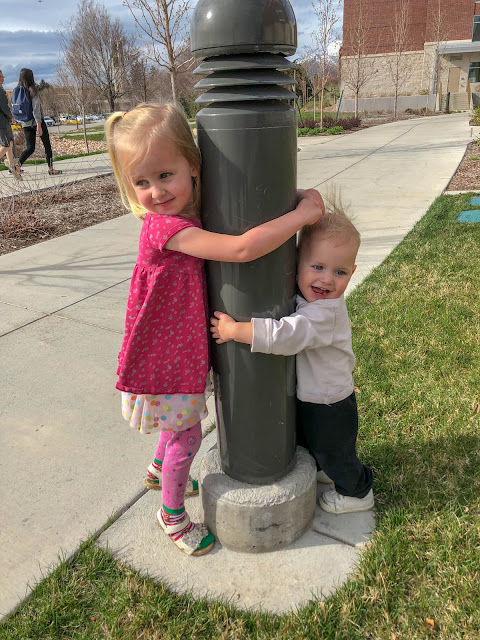 After our museum visits we hit up the Cougar Eat for some donuts, which were very tasty, and then Naanii, Auntie Josie, and Miriam headed off to their class(es) and the rest of us struck out for home, getting waylaid by some secret fairyscapes calling us to come exploring.

Who is this mustachioed stranger? 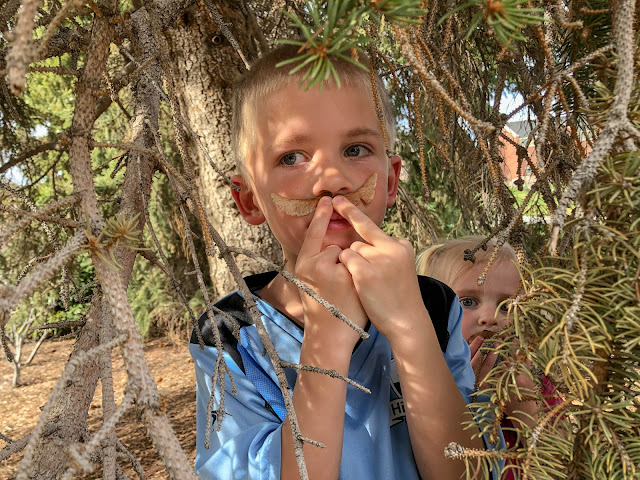 Or this one (who doesn't quite seem to understand what a mustache is but who definitely wanted her turn in front of the lens)? 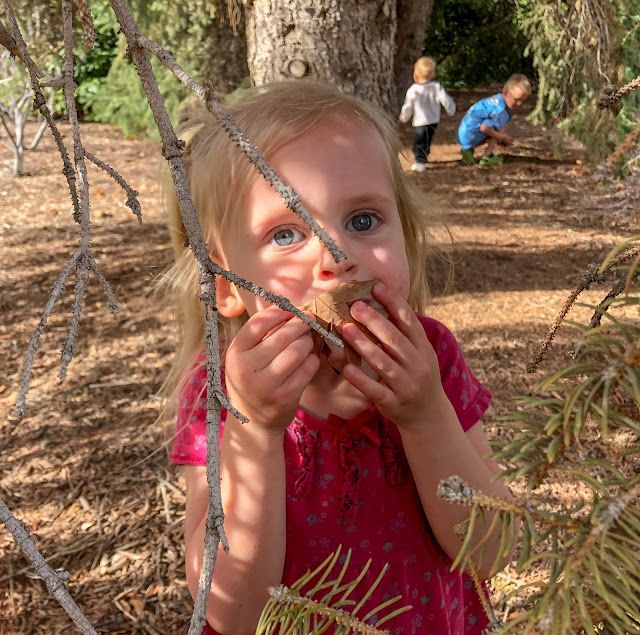 Sadly, Rachel has largely outgrown romping around under trees, both physically (we both had to bend in half to get under the canopy) and imaginationally (though, really, you can fight against that one, Rachel). We spent a few minutes chatting together while the little kids played, then spent several minutes trying to coax the kids out, and then finally dove in to retrieve them. I'm sure they could have played in there all day (so we should probably go back sometime), but we had to get home for dinner so we could see our daddy (finally). 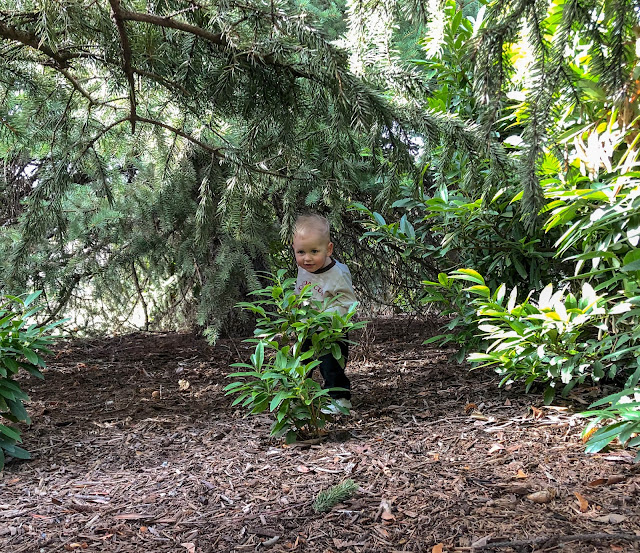 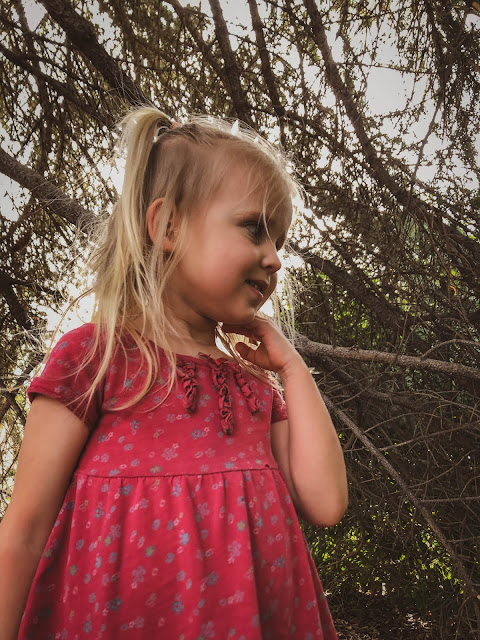 I wish there were more areas like this to play in around here. All the playgrounds are so carefully curated and landscaped to promote safety that a good romp in the underbrush just isn't very possible. This was lovely...and probably highly frowned upon if we were formally discovered (but we weren't). 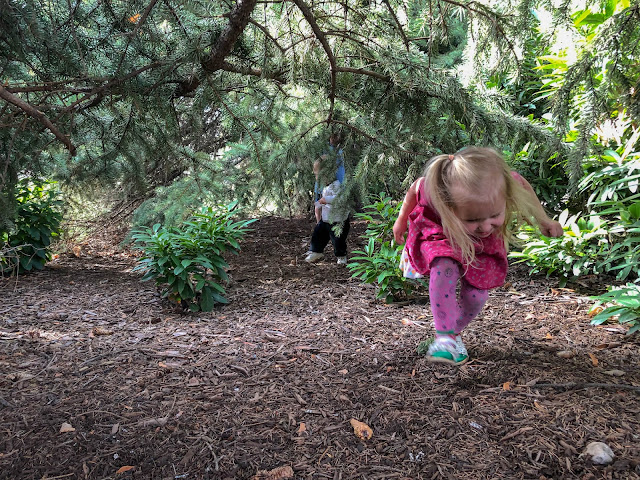