Spring Organ Recital (plus a duet with dad)

I'm at once relieved and sad to be finished with organ for the semester, which is how I feel about many things in life. I'm relieved because two hours of class each week (plus commute time) was an awfully big commitment for a 9-year-old. We're very lucky Miriam enjoys practicing because otherwise I don't know how she would have made it through this year (I suppose if she didn't enjoy practicing we wouldn't have signed her up)! I suppose I'm the one who is commitment-averse. I always sign my kids up for things and then wince at how much I've committed to (teaching preschool, soccer practice, play practice, organ lessons, etc). I love that they are learning new things but...I'm also tired...so I'm glad that she has her Tuesdays and Thursdays to just come home from school and play in the backyard, rather than rushing right back out the door.

But I'm also sad it's over because it's been such a fabulous experience for Miriam! She has loved her teachers and classmates, which is such a blessing because this has been such a difficult year for her at school. And in the face of that, organ has brought her so much joy! All the kids are just so sweet and they have this shared interest of everything organ, which has helped them be friendly with each other. And it's been so wonderful to have this class not only as a musical outlet for Miriam but as an emotional one as well.

So I really hate to say goodbye. But, here we are... 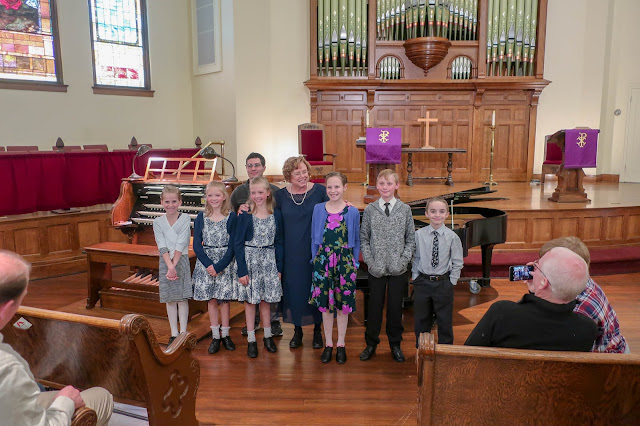 Miriam had her final organ recital up in Salt Lake at the First United Methodist chapel on Saturday. Here she is playing her pieces, if that's what you came to see:

It's a beautiful chapel with a fascinating history. The stained glass window of the garden tomb was particularly interesting (and beautiful) as was the organ itself.

We got to go on a little tour inside the organ (which Miriam has done before during a Pedals, Pipes, Pizza even), which was fascinating. They played different sounds for us while we were inside and we got to see different instruments working—for example, they played a xylophone of sorts while we were in there so we got to see the little hammers striking the keys, and then there's a set of chimes that will jingle, and literally thousands of pipes (trumpets and flutes and so forth). It's an impressive and mind boggling instrument.

Andrew Unsworth (of the Tabernacle at Temple Square), had this to say about his choice to pursue the organ as an instrument:


The versatility is attractive. “There are so many possibilities you feel as if you are conducting an orchestra,” he said. And then there is the volume. Organists control massive blowers that feed air through the pipes. To feel this floor-shaking force is a rush. “If I wasn’t an organist I would have been a heavy metal guitarist..."

The organ is truly a powerful instrument—some of these kids were vibrating the floorboards, rattling the windows, shaking the whole building, it seemed!

Here are Benjamin and Rachel inside the organ: 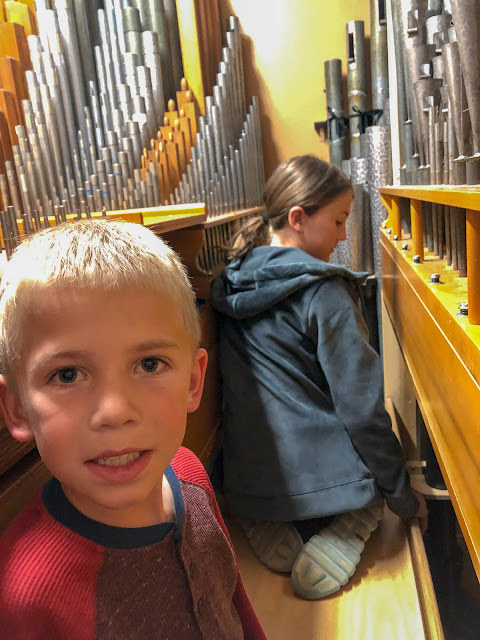 Rachel didn't particularly enjoy being up on that platform (she's lucky they didn't have us climb into the upper loft!): 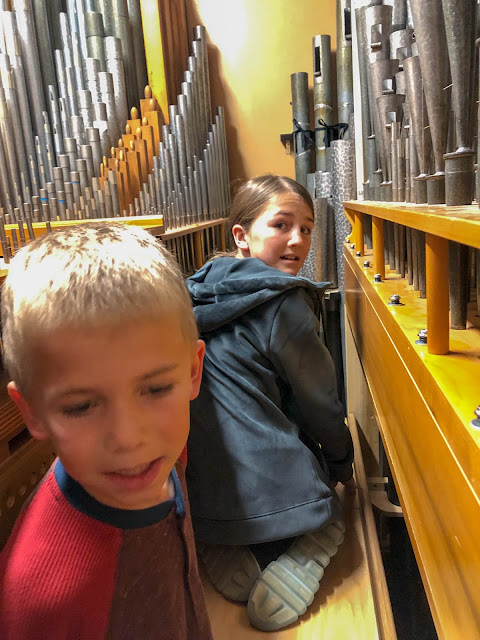 Grandpa walked around with Alexander, who was feeling a little fussy—though he was notably more fussy after he reached out and touched a hot radiator! Miriam was also excited to have her school teacher come. Mrs. Gregory is such an invested teacher. At the beginning of the year she invited each of the kids to invite her to one outside-of-school activity. She's been to football games, soccer games, dance recitals, piano recitals, choir concerts, and now an organ recital (in addition to who knows what else)! The children really appreciate her support; it's so wonderful when teachers go out of their way to let their students know that they are part of their team. 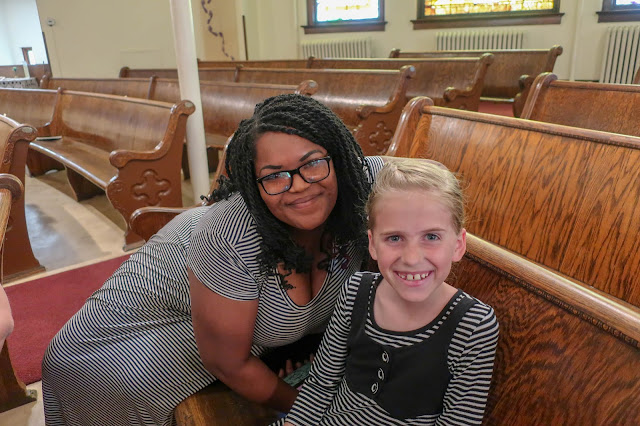 How fun that Miriam and her teacher coordinated so perfectly, too!

In addition to preparing for her recital, Miriam has also been working on a piano/organ duet with Andrew. They played together in sacrament meeting today and they did so well—better than any of their practices. I'm sure Grandma was giving Miriam some celestial support.

The song is Holy, Holy, Holy (written by Reginald Heber, who composed the lyrics to Come, All Whose Souls Are Lighted, which was included in the original LDS hymnbook, and which remains in the current hymnbook) to the tune Nicaea (composed by John Bacchus Dykes, who wrote tunes for Lead, Kindly Light and Jesus, the Very Thought of Thee in the 1985 version of the LDS hymnbook).

Apparently it's a popular hymn in other churches but it is not a familiar hymn among our congregations. It's still beautiful. Plus it was the only duet we could find for organ/piano in all of Karen's organ stuff that looked like Miriam could tackle at this stage in her career...so...

She and Andrew spent several hours at the church hammering this out and he just let the camera roll, which is why he let out a whoop at the end. Miriam had been reduced to a puddle of tears because she couldn't get the ending right and then she more or less nailed it. So they were both rather happy.

As much as she enjoys practicing (and she truly does), she's still a regular kid inside.

A few days ago Andrew asked her to practice the ending "until she was happy with it" because it wasn't quite there (it's hard to get both your hands and your feet used to working independently yet cohesively). At that moment she was feeling reluctant about practicing so she stalked over to the organ, flipped it on, sat down and played through the ending once, stood up, turned off the organ and said huffed, "Whelp. I'm happy with it!"

I think she's happy—from this end of history—that she put in the extra practice to play it well.

She also did some prelude, since it was Andrew's week to play the organ at church, and is looking forward to the next time she gets to play.
Posted by Nancy at 2:54 AM