On Saturday evening we attended a BCC Press dinner prior to going to a book launch reading for AshMae Hoiland and Rachel Hunt Steenblik. Andrew does most of the typesetting for these books (there are a couple he hasn't done), which is a nice little hobby for him. 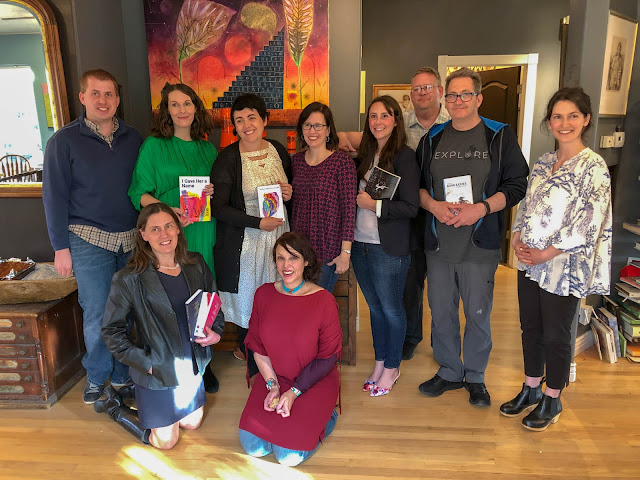 Rachel Hunt Steenblik just released her second book of poetry about Heavenly Mother (Mother's Milk was first, and this one is called I Gave Her A Name). Ashley Mae Hoiland did the artwork for the book, a smattering of which can be seen below:

She also released her memoir about being diagnosed with MS, A New Constellation.

It was fun to get to meet her face-to-face since she's one of the instructors of the writing class I'm taking. When she walked in I thought, "Oh, there's AshMae!" and I gave her a little wave and then realized that while I see her every week she doesn't actually ever see me and so, of course, wouldn't recognize me. But I did talk to her a bit—so brave of me.

This gathering was actually pretty funny because writers, on the whole, are a solitary bunch. Most people in attendance would—and did—describe themselves as introverts.

Steve Peck was there (author of A Short Stay in Hell and many other stories; he has a book coming out soon with BCC—a retelling of King Leere). He knew Andrew's family when they lived out in North Carolina and became a biologist and when I was the graduate secretary for the Integrative Biology program at BYU I worked with him a bit.

When Mike, the editor for the press, was extolling Andrew's typesetting, Steve piped up and said, "I have to say, though, that at age four he was not such a skilled typesetter!"

Everyone chuckled about that.

In addition to knowing Steve, there's Kathryn (on the far right of the picture) who served with Andrew in Italy years ago. And then we had some of our Durham second ward friends there as well: Rosie and Jake.

Even with so many people present that we knew fairly well, it was a rather quiet gathering (aside from the few token extroverts—our host Andi, for example (sitting on the floor in the red)). We chatted quietly but mostly didn't have much to say.

I can't even imagine how the readers were feeling at the party, knowing that they'd have to get up and speak in front of a crowd! 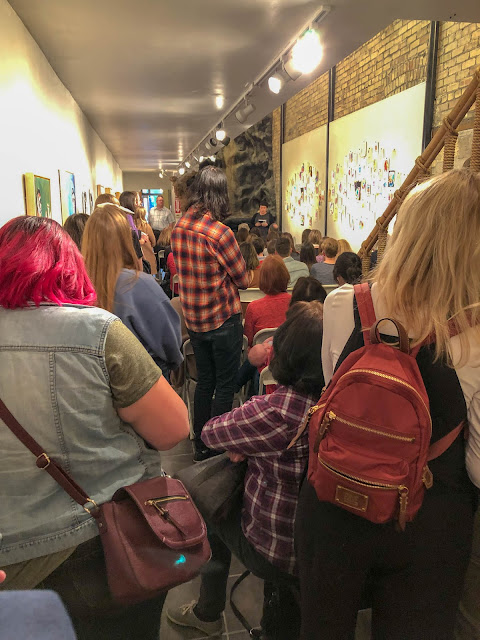 It was a lovely evening, and fun to get to go out with Andrew! We haven't been out since his department post-Christmas party in January!

It's difficult to get out when you have such a fussy baby as Alexander. My mom came over to help Rachel watch the kids (but then Rachel bailed on her to play night games with her friends) and Alexander survived the evening well enough. She said he didn't cry (much) but spent almost the entire time searching for me. They walked up and down the stairs and up and down the stairs, peeking into every room, knocking on closed doors, and not finding me anywhere. My mom kept shrugging her shoulders and saying, "Well, I guess we can check downstairs again." And then Alexander would beetle his way down the stairs to look for me. Then, "Huh. Maybe she's upstairs."

Zoë and Benjamin were watching a show in the basement and my mom must have poked in there with Alexander to "check" for me, and Zoë must have overheard this because after I came home and my mom left, I went downstairs to turn off the television and put the kids to bed and Zoë said, "Oh, you are home! You're a pretty good hider, Mom!"

I'm not sure that my mom had the best time babysitting my kids, but I think she made an impact on Alexander because the next day when we saw her he called her, "Nana," which is a combination of sounds he's only used for "banana" before (my kids call her Naanii, so "nana" is pretty close).

A friend on facebook recently wrote an apologetic rebuttal to a CNN piece about the church and ended her review by saying, "Final point: I think that By Common Consent is a really irritating blog in the 'bloggernacle.' It is not that great of a source to get the 'pulse' on what mainstream latter-day saints are thinking, believing, feeling, or even practicing."

Her words stung a little because—like, not to be pedantic, but—we're members of the Church of Jesus Christ of Latter-day Saints (or, I suppose, Latter-day Saints, if we have to go by a nickname) and also because with a BCC book sitting in front of me, and a BCC book on the shelf to my right, and on the floor where I was just studying (they recently put out such wonderful books), I have to wonder...

Am I not mainstream?

Is what I think, believe and feel somehow invalid?

Do I not practice appropriately?

And according to whom?!

Who gets to say what is mainstream and what is not?

I don't love every book BCC has put out, but the books I do love are genuine expressions of faith. They are beautiful and they are good. And I have seen letters from people (with last names of things like Uchtdorf and Eubank) thanking the authors for their work and encouraging them to continue.

I have seen things I've wished for—sometimes for years—come to fruition recently, with age changes for missions and gentle rewordings of policies (and sometimes complete—and very necessary—overhaulings) and efforts to include young women in more thoughtful ways and divorcing ourselves from the scouting program...and so forth. If these changes are good and right now, was it so bad to have wished for them—secretly or openly—before?

Once someone messaged Andrew (anonymously, but we believe it was someone who knows us rather well, given the content of the message) and accused him of being a "missionary for the adversary," which was rather perplexing. My friend's comment almost hurts more, however, because she didn't specifically call me out; she simply took her broad brush and painted the entire BCC world as heretical without giving a second thought about the multiplicity of thoughts, beliefs, feelings, practices and people she was splattering with paint. Does she know I enjoy a lot (not all, but a lot) of the commentary that comes from BCC? That I often find it uplifting? Probably not.

Ironically, I've always been such a rule follower, such a devout member, that in addition to being accused of heterodoxy and being a missionary for the adversary, I've also been told I'm a Molly Mormon Member.

And thus it is that we very mainstream-ly spent eight hour listening to General Conference this weekend and a few extra hours with friends new and old very unconventionally (?)* pondering Heavenly Mother, discussing how faith can help us overcome challenges, and how there's a always a place for everyone at the table—that no matter where they came from or how long (or why) they stayed away they are always welcome and can always find a home here.

* Or not unconventionally because Heavenly Mother is a "cherished and distinctive belief" of ours.
Posted by Nancy at 2:08 AM