We went on a field trip to Dripping Rock for family night. After sitting for eight hours listening to church talks this weekend I figured doing something more physically active was called for. Plus we've been following the Come Follow Me manual and due to General Conference the same little section of scriptures was stretched over two weeks, so we've already covered a lot. I wanted to make sure to cover things in a different way. So we went to Dripping Rock, which is a short little hike that the kids all enjoy. 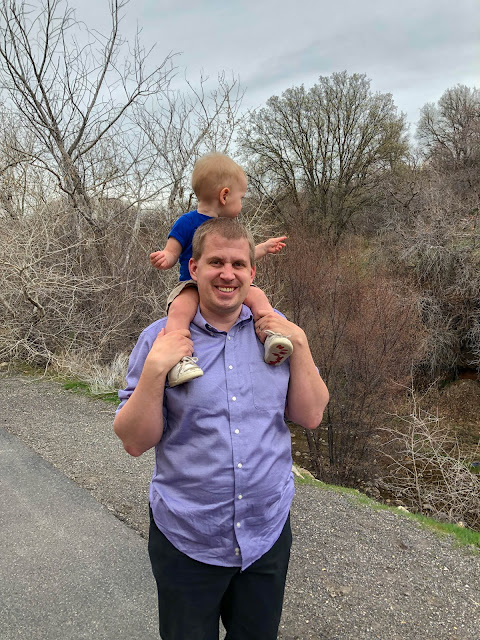 It's the beginning of April (obviously) and winter lasted so long that the apricot trees are just now beginning to blossom—and it's still supposed to snow later this week!—so I didn't think anyone would want to get into the water because I thought it would be too cold for that.

But—pro tip, here—they always want to get in the water so just prepare for that (don't be like us and have to cart soggy children home).

Here are my girls mostly not getting in the water (at first): 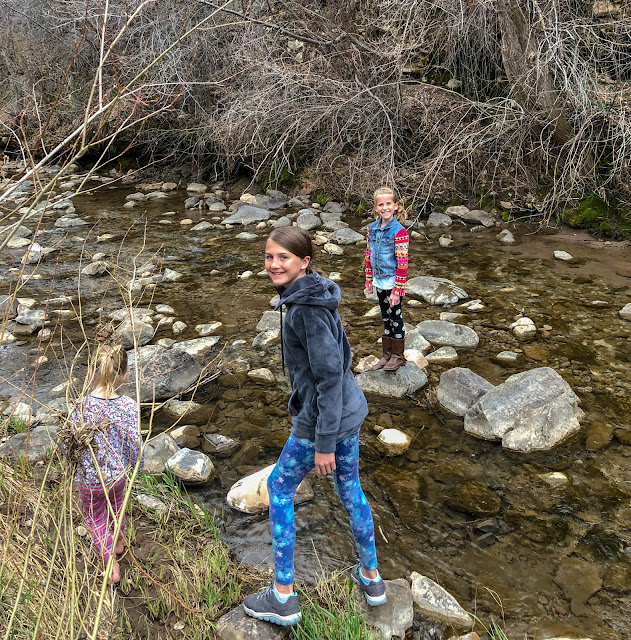 Here's Benjamin, who yanked off his shoes, pulled up his pant legs, and dashed into the water (at first): 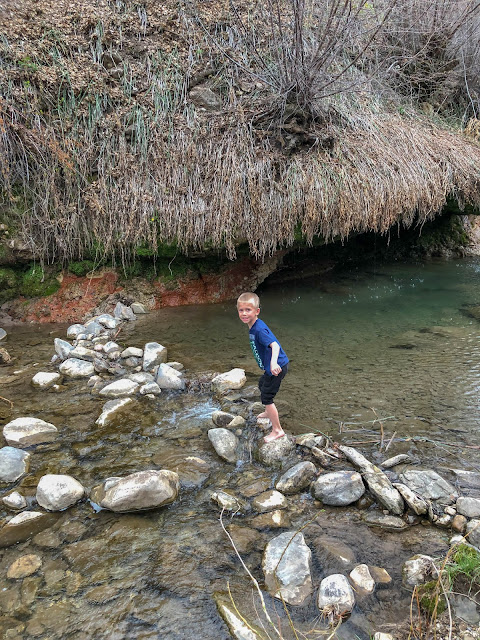 Alexander was just as intent on getting into the water. When he saw it he started trying to take off his clothes—because we were going to go swimming, right?! 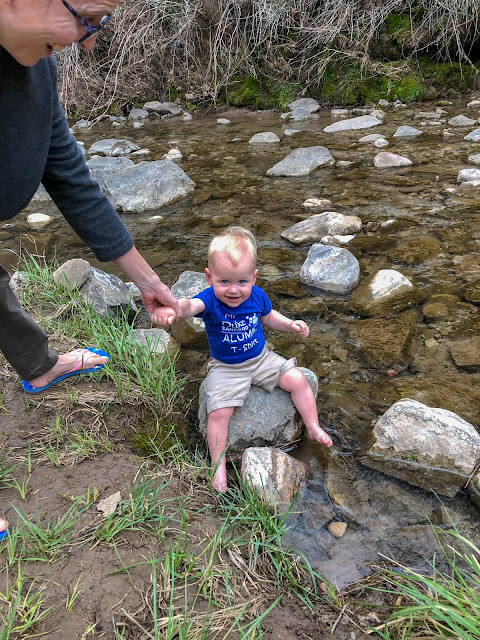 I thought he'd be turned off by how chilly the water was, but he was not (and truthfully it was surprisingly warm for this early in the spring). He insisted on climbing all over the rocks and eventually just sat down to splash around for a bit. 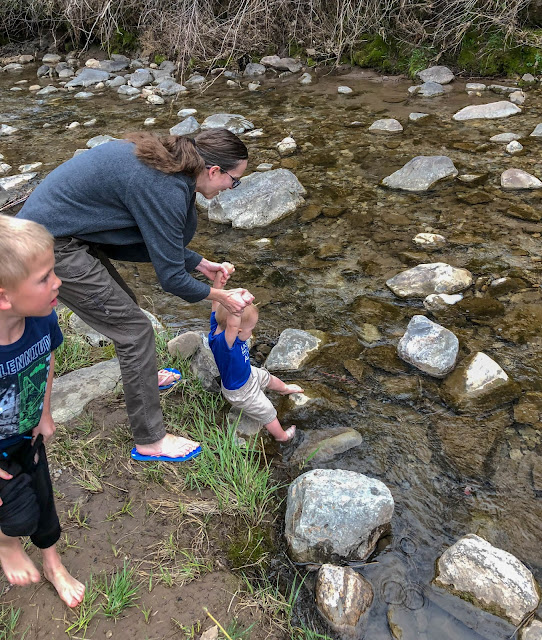 I am helping him because he was going to wade in the river with or without me and, well, he's only 18 months old so with me it was... 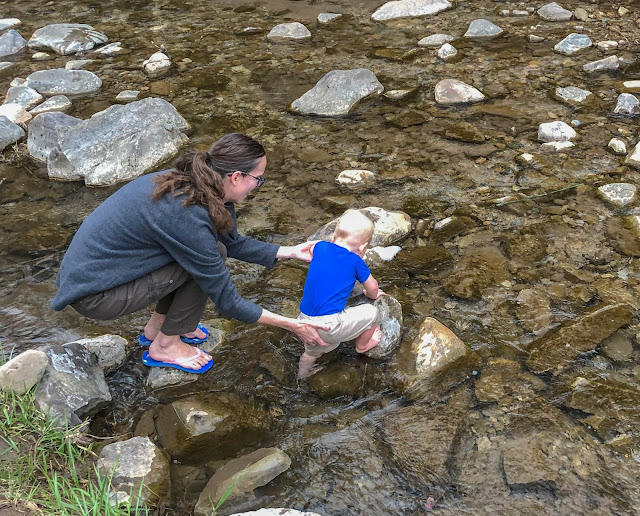 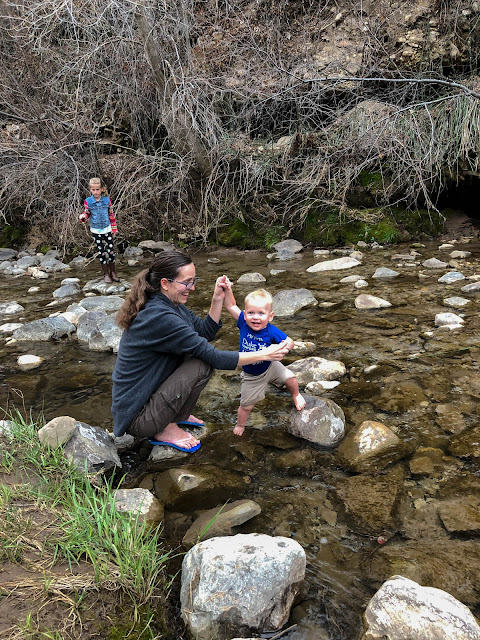 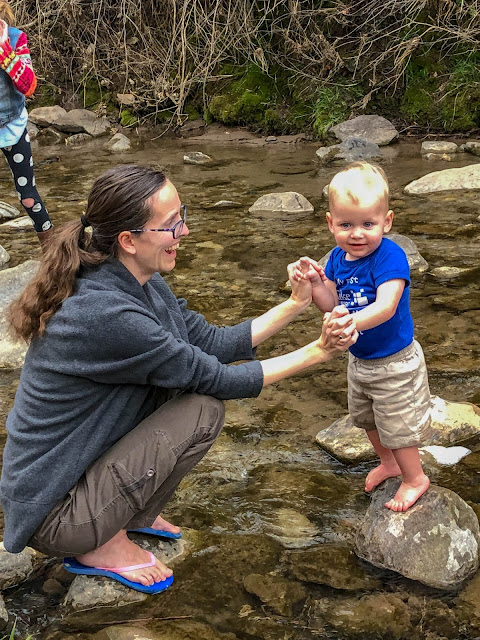 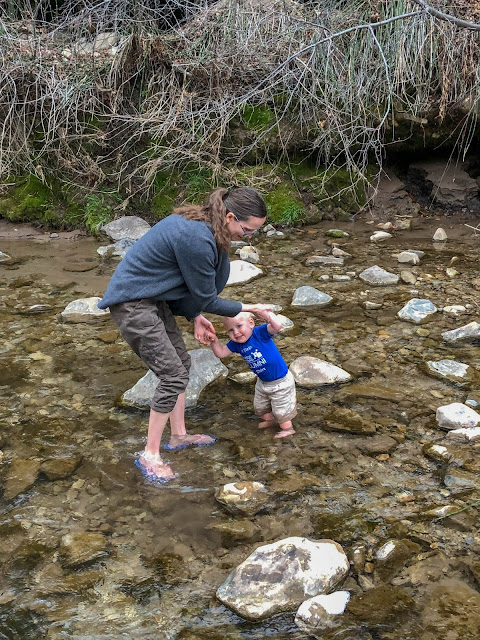 Here's Benjamin getting wetter and wetter (I don't know if you can tell but he's soaked clear to his waist): 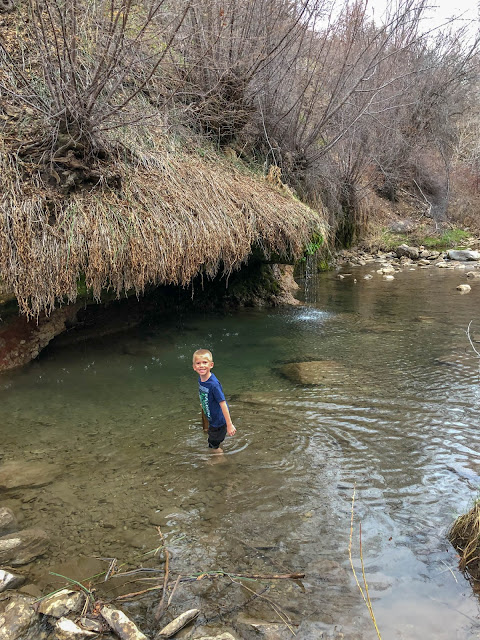 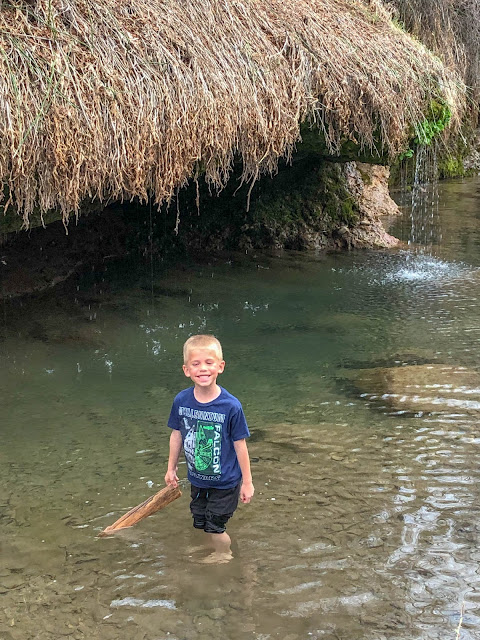 And here's a few more of Alexander clambering about on his own: 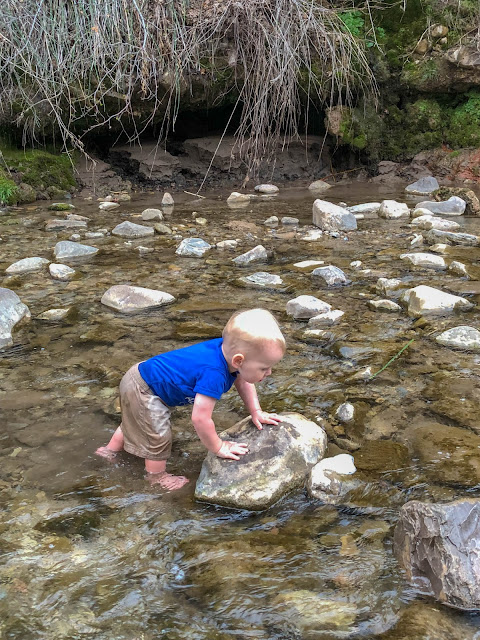 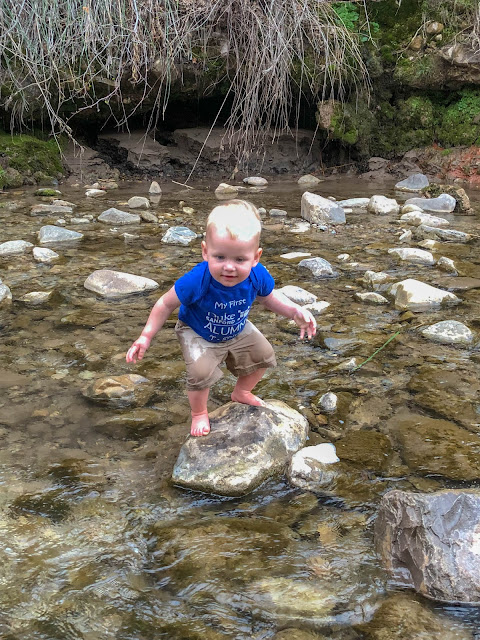 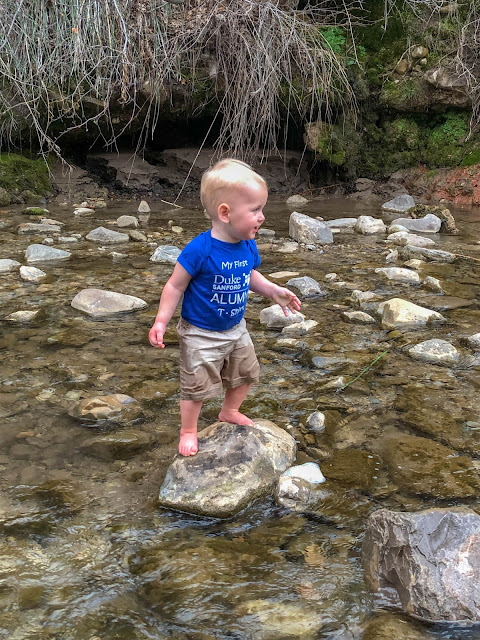 While we were out, we talked about an article from the December 1989 Ensign (which can also be found in the Institute manual for the New Testament) titled, 'Why This Holy Land?', which President Nelson (then simply Elder Nelson) wrote. In it he talks about various geological features of Israel and why they're significant to the stories of the New Testament, Jesus' ministry, as well as to us today. Specifically, we talked about Matthew 16:


The Savior brought his disciples a great distance to teach at a place called Caesarea Philippi, where He asked them this crucial question: “Whom do men say that I the Son of man am?”

“Thou art the Christ, the Son of the living God.

“And Jesus answered and said unto him, Blessed art thou, Simon Bar-jona: for flesh and blood hath not revealed it unto thee, but my Father which is in heaven . … upon this rock I will build my church; and the gates of hell shall not prevail against it.” (Matt. 16:13, 16–18.)

The modern-day scene in Caesarea Philippi is unique. There is a mountain at the base of which is a mighty rock from which water seems to be flowing. These cascades comprise one of the three major headwaters of the River Jordan, literally the liquid lifeline of this country. As Jesus was preparing to conclude His mortal ministry, here He trained future leaders of His Church. Could it be that the Savior brought His disciples to this spot to teach the lesson that this majestic mountain symbolized the rock of Christ from whom revelation would flow?﻿—revelation to bring light and life to them, just as that flowing water of the River Jordan nourishes Israel.

Though he doesn't specifically mention the name of the headwaters, I'm assuming the place is Banias (the picture in the Institute manual seems to match the picture on Wikipedia, so we'll assume it is so). Our Dripping Rock pales in comparison to the mighty spring of Banias, I'm hoping it was interesting for the kids to learn about "the rock" and "living water" here. 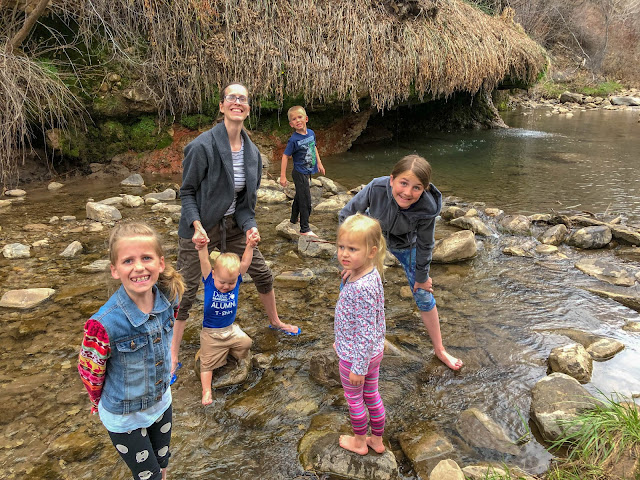 On a side note, I did not realize that a spring was a spring because it was a headwater—literally just gurgling out of the ground suddenly—until we visited the John the Baptist Spring in Jordan last week thirteen years ago (what?!). There we were, walking along and there was no water anywhere and then, behold, a spring. Water was just flowing from the earth. I'm not sure that I'd seen that before or, if I had, it was more meaningful, somehow, in the desert.

I grew up with water.

In the lush forests of British Columbia, I played in Hyde Creek. I splashed in the ocean. I danced in the rain. And I was on the swim team so I was constantly swimming. Everything was always wet.

When we moved to the prairie, water was still very much part of my life. There was the swim team, of course, but also our town was named High River. The river was part of life. In the spring we always watched to see how close the river would get to the bridge (sometimes it gets far too close). In the summer we'd swim in it. Then there were the lakes—Emerson and Sunshine—where we spent many happy hours catching creepy crawlies with homemade nets of nylon stocking stretched over bent hangers.

I suppose Utah has its own water sources—reservoirs and lakes and rivers—but I haven't spent much time with them because they don't run through my back yard. Mostly Utah has felt very much like a desert to me.

And then we moved to Jordan.

To see water springing up from the desert is really rather amazing (in a way that it wouldn't be in, say, the rainforests of British Columbia).

President Nelson addresses this in his 1989 message as well. He says:

Instead, He selected the land with places stark and arid, but made holy by His presence there. He did so for many reasons, including His desire to teach with geographical visual aids, and to fulfill scripture.

Much of the Holy Land is desert with very little water. Because water was scarce and precious, it became the object of special lessons taught by the Lord.

Amidst wilderness and desert isolation such as this, the Savior was able to teach important lessons that only those who knew what it was to be thirsty could fully appreciate. To the woman of Samaria at the well He said:

“Whosoever drinketh of this water shall thirst again:

Anyway, a spring is called a spring because water is literally just springing forth. And that's how it's different from a creek or stream or brook. Which seems super obvious but which apparently took me ever so many years to figure out.

Here are a few more pictures of the kids picking their way across rocks (or just, you know, splashing through the water): 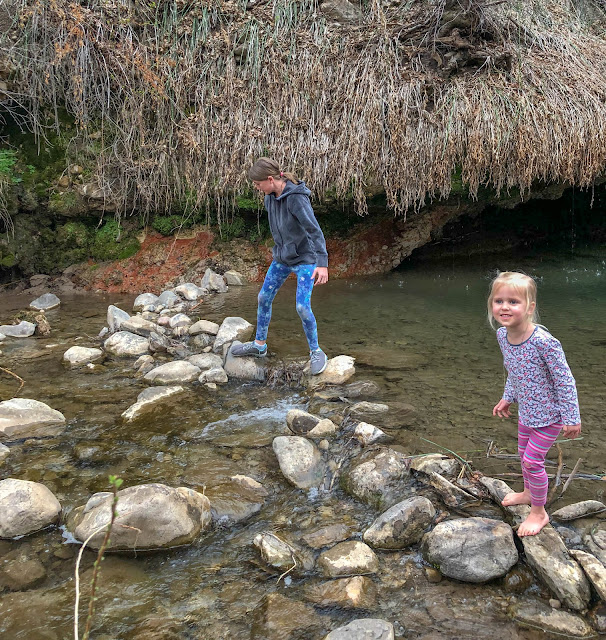 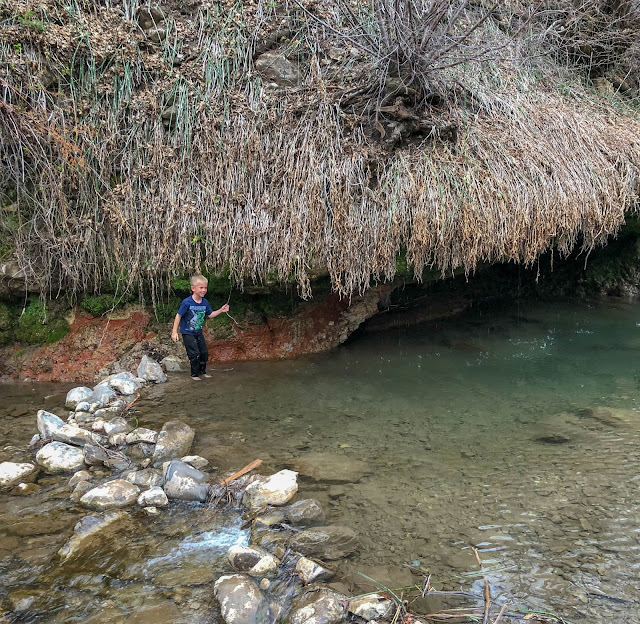 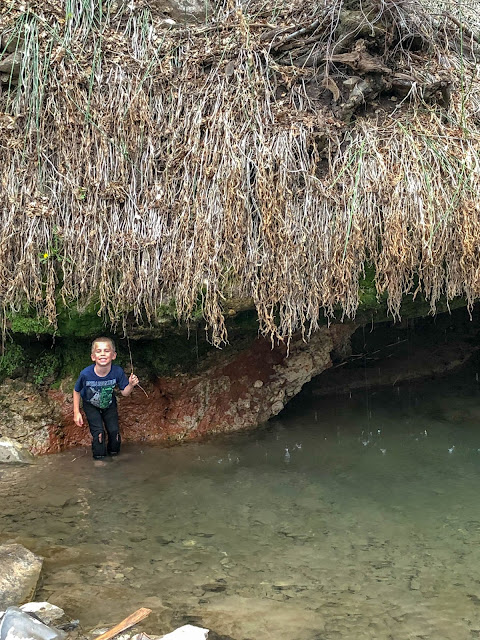 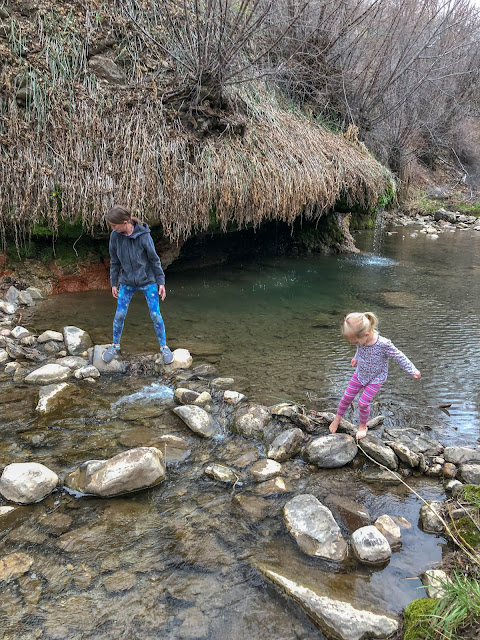 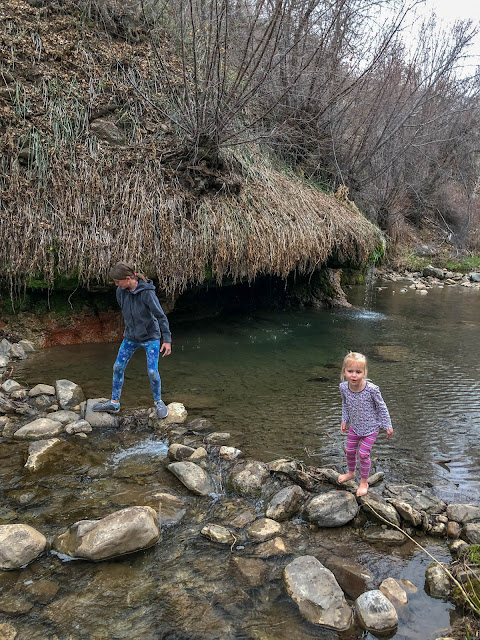 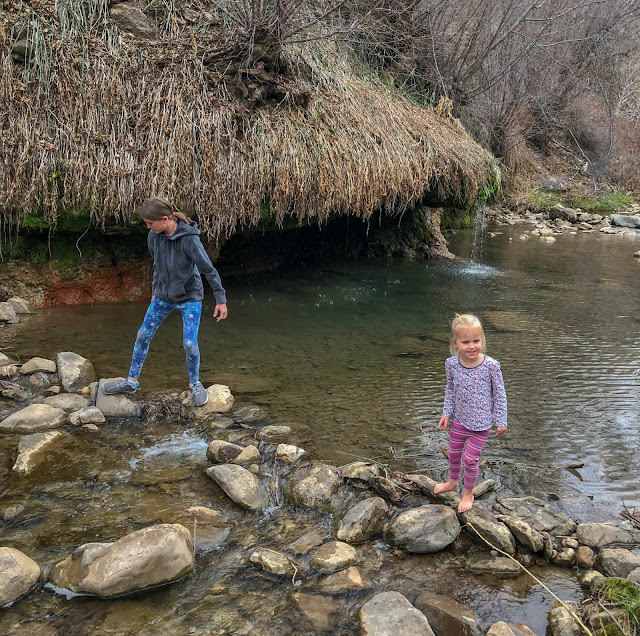 Here are Miriam and Daddy staying safe on dry ground: 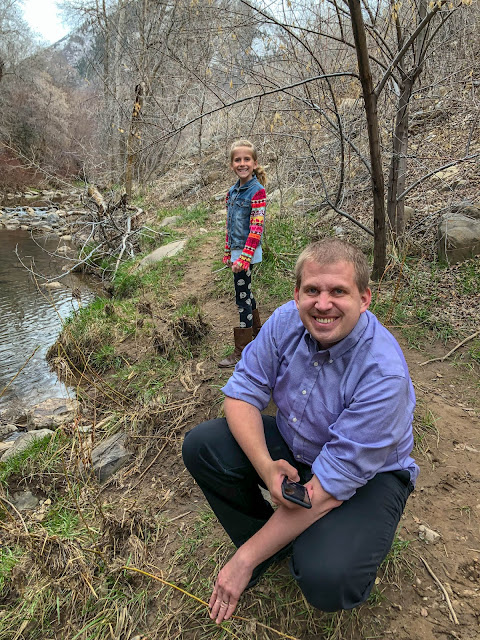 Andrew would have been much more adventurous, I'm sure, if he had changed out of his work clothes before we left on our little field trip.

Alexander did not want to leave. Actually, none of the kids did. But although Benjamin splashed out into the water one last time after we said it was time to go, and he and Zoë dawdled while putting their shoes back on, and Miriam and Rachel complained that they had just taken off their socks and shoes, Alexander was the only one that I had to carry kicking and screaming up the steep river bank.

He insisted on walking back to the car, but kept trying to sneak off the trail towards the river (which is down a very steep bank so he would just tumble right down if he ever managed to get off the trail). It was rather frustrating because he absolutely did not want me to carry him but every time I'd put him down he'd start running toward, essentially, a cliff. 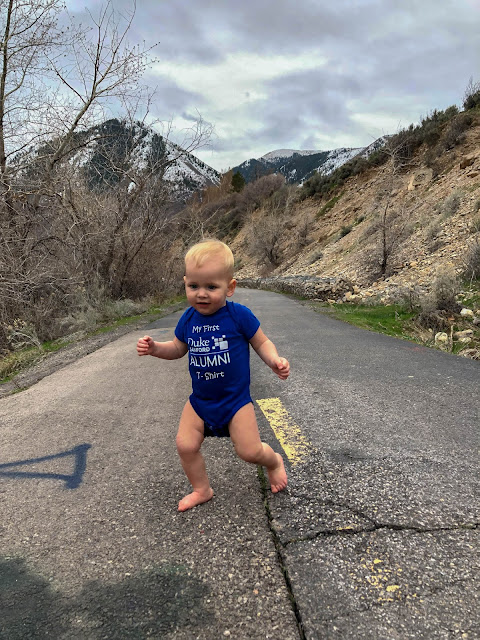 So I cruelly taunted him back onto the strait and narrow, saying, "Momma's leaving! Bye, Alex!"

And I'd walk a few paces and he'd yell, "Momma!" and toddle forward after me.

But then I'd stop so that he could catch up but instead of catching up he'd think, "Oh, she's going to wait for me! I'll go explore the river some more!"

We did eventually make back to everyone else at the van (but not before scraping our knees a couple of times). Here's my sweet baby on a soggy-bottom, bare-foot hike: 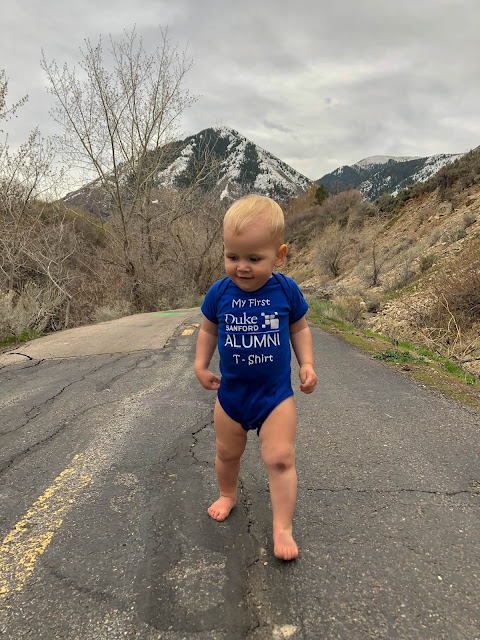 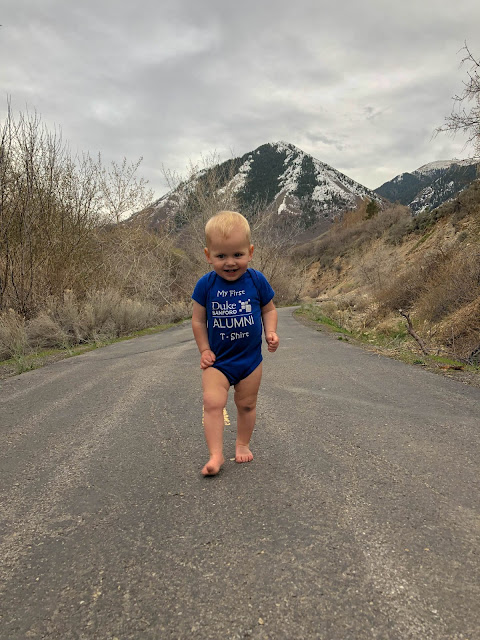 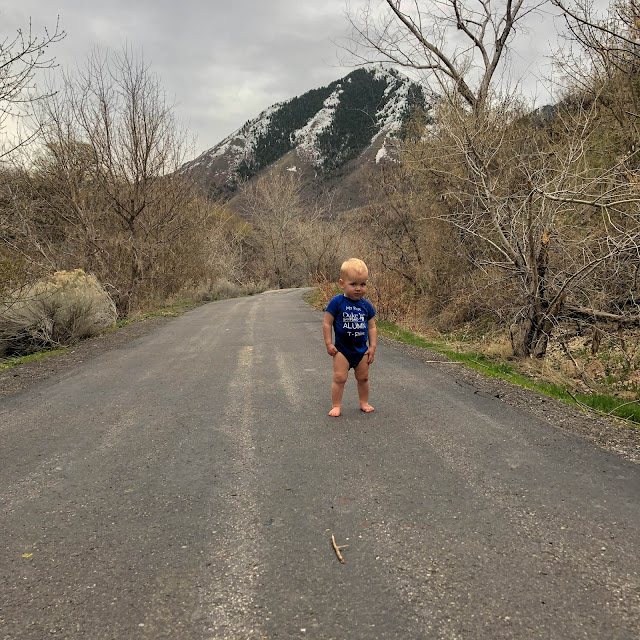 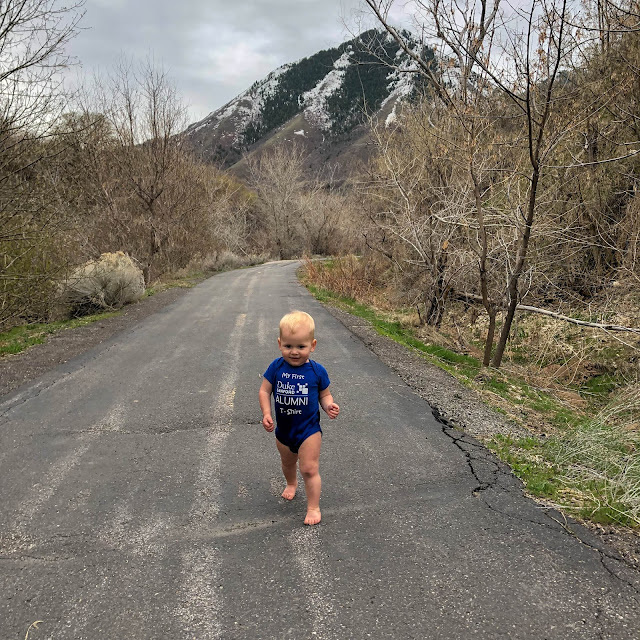 Alexander reminds me a lot of my nephew Deklan in this picture: 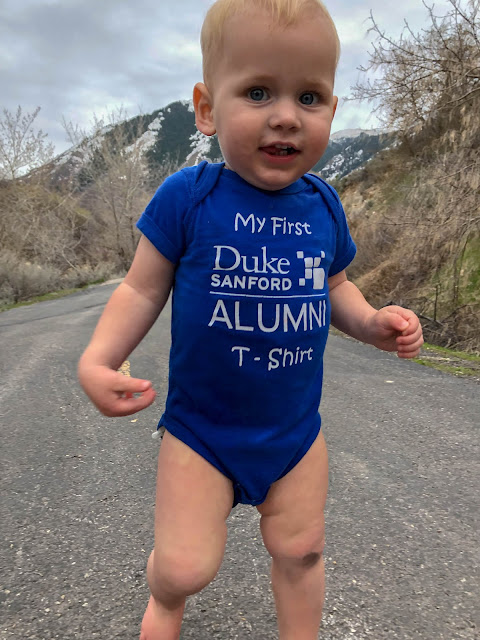 I can't find any good baby pictures of him, but I do have this one of him (he's on the couch in the red shirt): 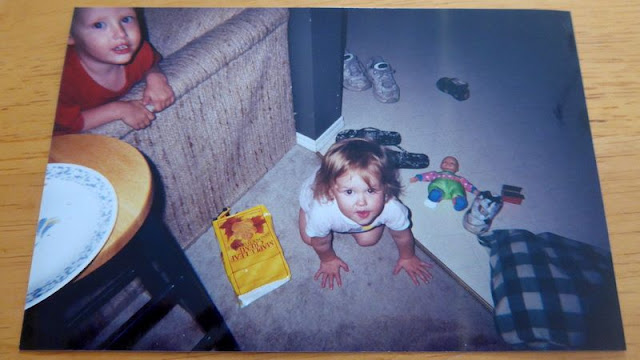 Deklan will be twenty this year, so he no longer looks like this, but I remember when he was just toddling around. And for whatever reason, this picture of Alexander made me think of little baby Deklan.
Posted by Nancy at 12:59 AM