We got a very exciting text message from Uncle Jacob this morning: Baby Dean was on his way!

He was born at a quarter to noon via an emergency cesarian section. His heart rate kept dropping with each contraction, never rising back up to where it should be in between, and then he went into complete distress so they performed an emergency c-section and dislodged him from the birth canal and did a little neonatal resuscitation to get him pinked up and squalling. It was an intense and traumatic few minutes, but both mom and baby are doing fine now.

6 pounds, 2 ounces, so just a teeny little thing—and cute as a button! And just one day shy of being born on his brother's half birthday!

We can't wait to meet him!

My time at the hospital today was a little less thrilling. I joined my mom in Ogden to visit with her best cousins/friends growing up: Marie and Margaret. Marie is here from Ohio because Margaret is dying, rather quickly. 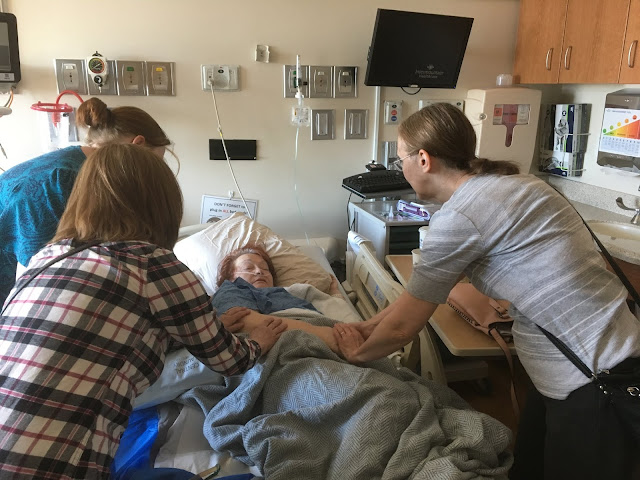 She is thrilled to be joining her husband Clarence, who passed away three years ago. Her children seem resigned to her impending departure, but I can't imagine losing one's parents so close together, so young. 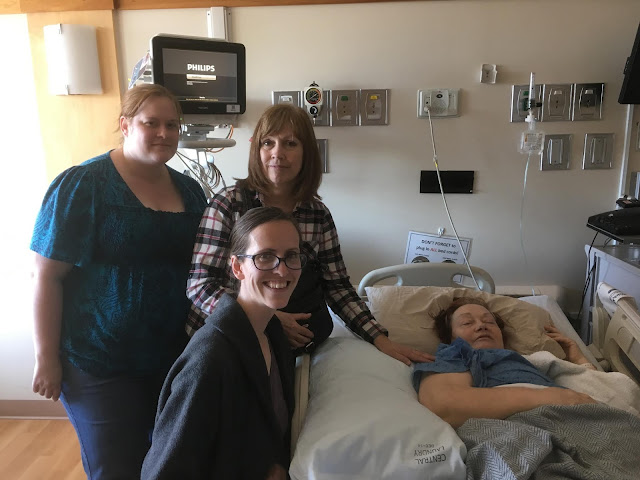 I know I'm getting older as we speak—doctors no longer refer to me as a "spring chicken" and instead they say things like, "You should come in for a regular annual exam because you're not young anymore. I'm not saying you're old. But you're not young."—but I'm still relatively young. And I'm sandwiched right between Margaret's daughters (Mary is about six months older than me and Becky is about six months younger). I don't know much about life, but I know that is too young to lose your parents (Clarence was in his late 50s when he passed away in 2016 and Margaret is in her early 60s now).

You can read more about Margaret on my mom's blog (here, here, and here).

I'm glad I got to visit with everyone because we don't know how long Margaret will hold on (though it really won't be long) and I'm afraid that if things are drawn out much longer I'll be in Georgia looking for a house during the funeral and I really wanted to be sure to just "show up" for those sweet Kemp kids.

Not that I did much.

But I know that showing up means a lot, saying, "I see you. I'll help you carry this burden," helps a lot.
Posted by Nancy at 1:25 AM