April Fools' jokes are still alive and well here so we basically can't wait for this month to end. On Thursday night, Rachel graffitied all over the milk jug in order to trick her dear ol' grandpa into believing it had gone bad: 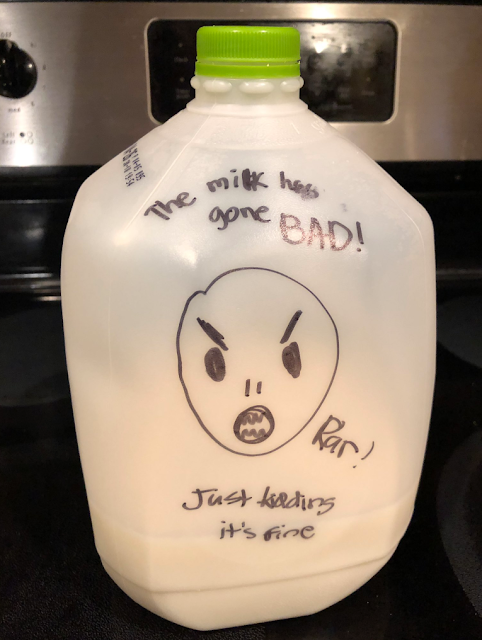 "The milk has gone BAD!" she wrote, with an angry alien face roaring with...dismay...or...rage. But at the bottom she wrote, "Just kidding. It's fine."

And then she put it back into the fridge.


On Friday morning, everyone used the milk like normal, which meant it then got left on the counter after breakfast (because that's part of our normal). Grandpa came across it, read the note on it, wondered why someone had gone through all that work when they could have just dumped it down the sink themselves, dumped it down the sink, and then spent the rest of the morning worrying about whether or not his stomach was feeling upset from the tall glass of milk he'd had the evening before.

"But did you read the whole thing?" I asked.

"The second half of the note said: just kidding; it's fine."

"Oh. Well. It's gone now. Someone left it out on the counter so if it wasn't bad before..."

Grandpa has this thing about milk feeling "lonely," like he's terribly worried it will suddenly turn if it's not immediately returned to its shelter of the ice box. Andrew said he grew up hearing, "The milk is lonely," and was trained to remember to put the milk back immediately after using it. Having the milk sit out during breakfast was anathema (though, quizzically, having the milk sit on the table during dinner falls within the realm of acceptability), which has always been a bit strange to me because I grew up with milk sitting out during breakfast (but never during dinner).

Plus, I don't worry so much about milk going bad.

I mean, I will concede that Grandpa has a point about the milk. At bestfoodfacts.org/uh-oh-who-left-the-milk-out/ they ask how long milk can be left out at room temperature, their milk expert states that milk should never be left out. So if we go with that information, Grandpa is right.

But farther down the page this milk expert clarifies her statement further to mean that "any perishables that have been stored above the 'Danger Zone' of 40° F for more than two hours, no matter what their appearance or odor" should be tossed out.

Of course, Grandpa probably wouldn't have gotten that far down the page because he would have stopped reading after the first sentence...

Though I do appreciate him keeping us safe from food poisoning, I also figure that in our house we average a trip to the kitchen at least every two hours (my kids are such grazers, plus it's on the way to the laundry room, the backyard, etc). I figure that any time I come across a lonely gallon of milk it's been sitting out for less than two hours.

Rachel was pleased that her trick went over so well, but was less pleased when I told her that in order to make mashed potatoes for her sixth-grade medieval feast I had to use a combination of almond milk and sour cream instead of regular milk.

Though Grandpa mentioned he would stop by to grab some on his way home from a lunchtime picnic date, he misplaced his wallet so wasn't able to go shopping (the wallet was later found on the floor of his car). So Andrew brought home some milk so that Grandpa could make macaroni and cheese for the kids for dinner. He babysat so that Andrew and I could go out—we went to a very yummy pizza place in Provo called Mozz (and then we went shopping for Easter goodies). It was nice to get out, and even nicer of Grandpa to volunteer to watch the kids for us (he'd originally planned on taking them all swimming and then take them home for dinner, but with half of them sick he decided to just stay home).

Tangentially related, I read a short article tonight about how to promote resilience in your children, by encouraging "six risky behaviours!" (not that that headline is remotely click-baity). And I was thrilled to see that "giving them a fright" made the list.

Andrew, Rachel, Miriam, and I have been locked in a battle recently to see who can scare whom the best for the past several weeks. We've been hiding in closets, jumping out from around corners. One time I hid myself in Miriam's messy bed and waited for her to climb in. That was a pretty good one. But the best was after a series of scares, Rachel announced she had to go to the bathroom, and then Andrew tackled her (for unrelated reasons—he didn't know my plans) and I pointed toward her bedroom, so he carried her off there and I sneaked off to the bathroom and climbed into the tub (behind the shower curtain).

She ran into the bathroom and locked the door, announcing that now "no one can get [her]."

And then I jumped out from behind the shower curtain and she collapsed on the floor with fright.

But, like, honestly, I'm just increasing her self-esteem. Or at least decreasing the odds she'll exhibit symptoms of anxiety when she's older.

They call this kind of parenting, this "novel construct involving active physical and verbal behaviors that encourage children to push their limits," Challenging Parenting Behavior (CPB).

I can see our kids now bragging to all their friends about how they have very "challenging parents."

Anyway, the basic idea is that  parents should "[encourage] their children to take risks, practice social assertion, and explore unfamiliar situations with confidence," by promoting rough-housing, exposing the children to safe risks, giving the child a fright, allowing the child to lose every now and again, and so forth. Very often, the researchers found, it's the father figure who will initiate these types of behaviours (and children with very gentle fathers later scored higher in anxiety categories than children with more...challenging...fathers), but there's nothing wrong with Mom getting in on things, too.

We want our kids to be really resilient, which is as good of a reason as any to give them a good scare every now and again. Bwahahahaha!
Posted by Nancy at 1:27 AM