Sunday with my mom's family

How is it Thursday night and I'm only now getting around to writing about Sunday?

I wish I didn't feel so frazzled all the time, but I do. My aunt said the funniest thing on Sunday. She said my children were well-behaved. She said that my cousin's children were exhausting and wild but mine were wonderfully well-behaved. I suppose that was a fair observation from the couple of hours she saw them because they were all remarkably well-behaved. But I think she would change her tune if she ever agreed to babysit them for ten days (it just so happens she recently returned from babysitting for my cousin for ten days).

My children are wonderful (as are my cousin's) but...they can also be exhausting.

I have been so frustrated by the dynamic Benjamin and Zoë have going on this week (both collectively and individually) that I'm just at my wit's end. They have been awful. Off the wall—off the charts—awful.

But they were well-behaved on Sunday, so that's good, I guess.

Anyway, we got together with my Auntie Colleen and Uncle Bruce (and Uncle LeRon and Aunt Sara) after conference on Sunday. We had a potluck dinner up at Uncle Bruce and Aunt Sara's clubhouse. My mom brought potato salad and chips and salsa. Uncle Bruce and Aunt Sara brought a bucket of fried chicken. We brought a fruit pizza (in honour of Josie's birthday, though she wouldn't let us sing to her), a cheeseball and crackers (and cheese slices for those of us who are afraid of cheeseballs (Andrew)), and a vegetable tray.

"You brought enough food to feed an army!" Sara said when we filed into the clubhouse with all those trays of food.

Five kids can eat a lot.

We had a lovely time visiting together. Zoë and Benjamin spent quite a bit of time playing with their magtastix set. We discovered how to make tops during general conference and the kids had a blast making and spinning tops during the afternoon session and we decided to take the fun with us to the clubhouse.


It's an engaging activity that's hard to get too wild with (not that they can't; it's simply always been a highly monitored activity since it is basically a bucket of choking hazards so when they break the rules I just put it away so they're fairly restrained when they play with it). Now I sound somewhat like a control-freak of a mother—"Have fun, children, but only have fun this way." 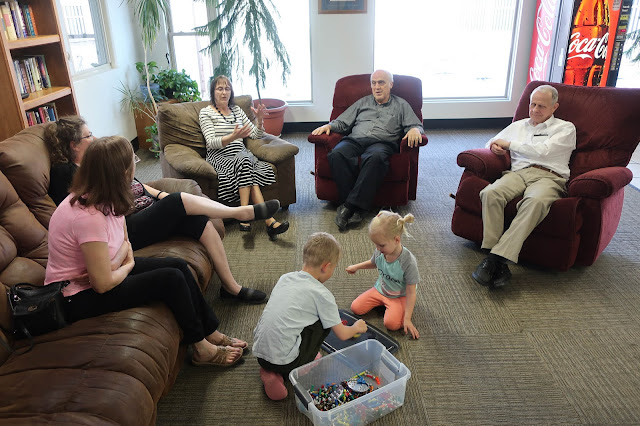 Meanwhile, Miriam, Andrew, and Rachel finished the puzzle Aunt Sara had been working on during conference. 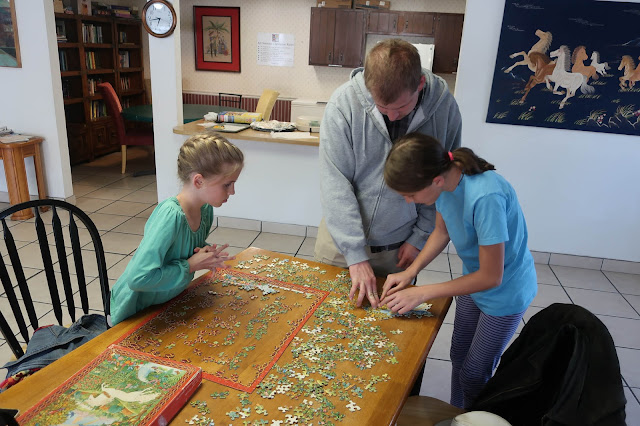 At one point, Zoë walked up to Aunt Sara and Auntie Colleen, who were then sitting together on the couch and she put a hand tenderly on each of their knees and said sweetly, "We really like you. Nobody else does. But we do."

I have no idea where she comes up with these things, but she is always delivering the most scathing compliments.

Today, for example, I told her that she could have a tea party for lunch (which is always a great test of my patience) and she was so thrilled that she said, "Thank you, Mommy! You're the best mom in the whole entire..."

She paused and stared me down.

"Only the neighbourhood?" I pressed, to my own detriment. "Not the world?"

"Not in the world, no," she responded. "There's got to be someone better than you out there!"

I'm sure there are plenty of mothers better than me out there, but I'm the one she's stuck with.

She said family prayer the other night and said, "Please bless that we will all hurry up and die so we can see Grandma again."

She has this way of being serious and macabre about things in a way that seems strange for a three-year-old. For example, her sisters were once minding their own business and Zoë walked up to them with a little hour glass and while glaring at them announced in breathy tones, "Sorry. You're out of time."

Which perhaps you'd just have to have been around to hear, but it was rather creepy (though apparently hilariously so since we now quote her all the time). She's an interesting child.

It was a fun little gathering. And now I think my Uncle Bruce and Aunt Sara are off having fun in Hawaii while Auntie Colleen and Uncle LeRon are preparing for a trip to the UK while we're all just sitting here wishing the semester could be over.

It's been an awfully difficult semester, but if there's one thing my mother taught me it was, "You can do anything for a semester."

It must be true, because here we are at the end of another semester—only one week to go!

And then we'll soon be on our way for a house-hunting trip, which is exciting (though not nearly as exciting as the UK or Hawaii). Part of me is so looking forward to moving and settling in somewhere and the other part of me is sad because I know we'll be missing out on a lot of family gatherings like this. But I suppose that's the way life is most of the time: bitter and sweet.
Posted by Nancy at 1:18 AM