A while ago we were Skyping with Grandpa and he said, "Alexander doesn't really look like Benjamin, does he?" We agreed that he certainly looks different than Benjamin did at this age.

I wasn't quite sure. He looked like...Alexander.

But then I was taking a picture of him the other day and I asked him to smile and in that moment it hit me—that was a Gavin smile! So I pulled up a picture of Gavin and sure enough:

My mom sent me a picture of Patrick when he was around this age because she thinks Alexander sometimes reminds her of Patrick, but I will have to keep that picture in mind until I can catch  Alexander making a similar face.

Actually, I think Patrick and I look—perhaps—the most alike out of my siblings (which is weird because people used to think that David and I looked very similar, though I am not sure we do as adults). Here we are at Rosie's wedding last year:

Actually, there's a little something in Benjamin that reminds me of Patrick as well. I know this because I call him Patrick on a fairly regular basis (which is weird because I know he's not Patrick).

I guess people always said David and I looked alike because we were so close in age that we were often seen together growing up. It's not that we don't look alike; it's just that I think Patrick and I look more similar to each other than David and I do. But Patrick didn't overlap in my social circles growing up. We rarely attended the same school (for six months of his kindergarten year and then for his entire grade one (my grade five) year—that's it!) and thus didn't hang out together very much.

But you can see that he and I really do look quite similar: 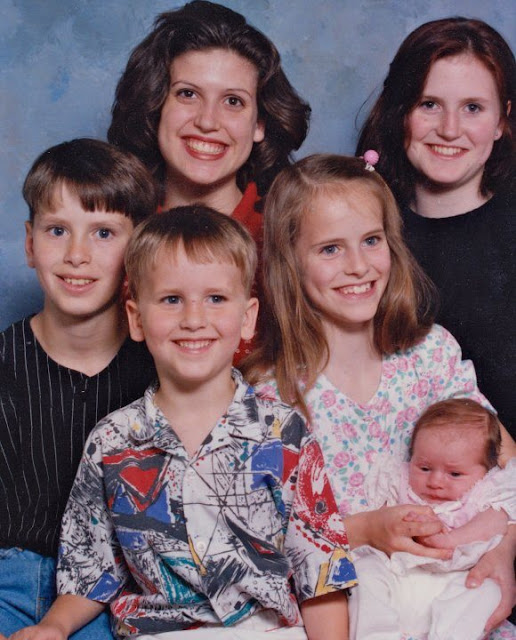 Don't mind Josie. She's fine. I was doing a great job holding her. And I'd never do anything like fall down a flight of stairs while carrying her or drop her onto her head on a gravel path requiring her to get "stitches" from a doctor friend who just happened to be present (he tied her hair into very strategic knots and instructed us not to wash her hair for about a week until things healed up). See? She's in perfectly capable hands...

Anyway, my point is that since I see a bit of myself in young Patrick it's no surprise to me that my little boy might remind my mom of her little boy.

But Gavin was a big surprise for me because I haven't been able to put my finger on who Gavin looked like so I certainly didn't think one of my own children would wind up being his clone. Yet, here we are...

They're a cute little pair though, aren't they? Wouldn't it have been so funny if they'd been born around the same time (instead of being years apart)? I just think it would have been fun to watch two identical baby cousins toddle around together.

Gavin's looks have changed quite a bit now that he's looking like a kid instead of a baby. I wonder if Alexander will continue to grow up to look like Gavin or whether he'll develop his own look (a mix of both, I'm sure).
Posted by Nancy at 12:02 AM