This morning we had our ward Christmas party—a breakfast—which was obnoxiously early. The other family at our table lamented with us that we'll be switching to the 9:00 schedule for church next year because it simply takes more effort (more planning/coordination/organization/forethought) to get a handful of kids preened for church and out the door at that time of day. But, I suppose we'll get used to it.

We've spent a lot of time at church this week already, I'm realizing. We had our Relief Society Christmas social on Thursday night, last night was game night, and today we had breakfast. Tomorrow we'll be back, but that's alright.

This afternoon Miriam went to her friend's house and Rachel and I took little kids to see Santa. Benjamin stayed home to keep Andrew (who is furiously grading exams) company (not that Andrew is furious about grading; he's simply working at a furious pace). I honestly don't know why everyone was moaning about going to visit Santa this year. We went both years we lived in Utah—and it was actually, legitimately freezing cold. It's absolutely not freezing cold here, yet no one wanted to go stand in the cold with me.

Not that I wanted to either, but these little ones deserve childhood memories, too (sometimes it feels like it was easier and/or that I was more motivated to take the older kids out to do things (such as visit with Santa)). It's not that I don't love my little ones as much; it's just that I'm a little more tired than I used to be (though, honestly, if y'all would let me sleep through the night that might change...).

He loves the mailman.

The line was long, but the weather was so nice that Rachel and I discussed removing our sweaters. People in the line were dressed in all sorts of things, from shorts and tank tops to winter coats and big fluffy boots. And all around us different languages were being spoken: Korean, Russian, Hindi, and a few I didn't recognize. It's wonderful to live in a place with so many cultures around.

After waiting in line for about an hour (broken up with the excitement of a mail truck driving up—because that's what Alexander had wanted to see, anyway), we'd made it this far (and still had quite a wait to go): 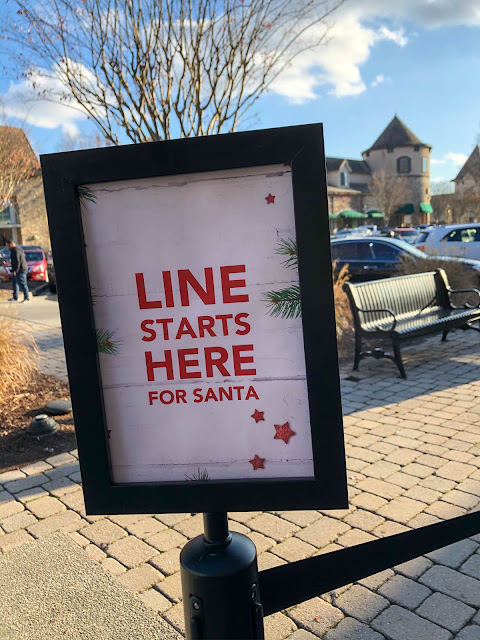 My sweet babies waited so patiently and sweetly until we made it inside Santa's little shop. And then they both started feeling anxious. One of Santa's elves noticed that Zoë was feeling particularly uneasy (Alexander was alright because I was holding him and continually reassuring him that Mommy was, in fact, coming to (which is something you'd think he could have figured out on his own since I was carrying him)), so she asked Zoë if she'd like to take a "practice picture." She took Zoë out of the line and over to a little backdrop and told her all about how nice Santa is and had her practice smiling for the camera: 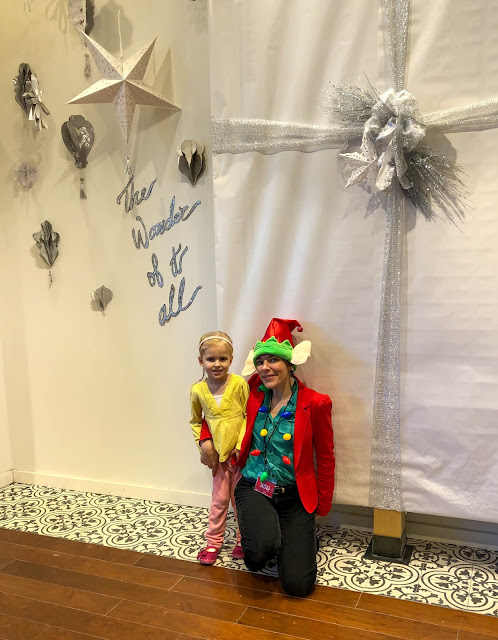 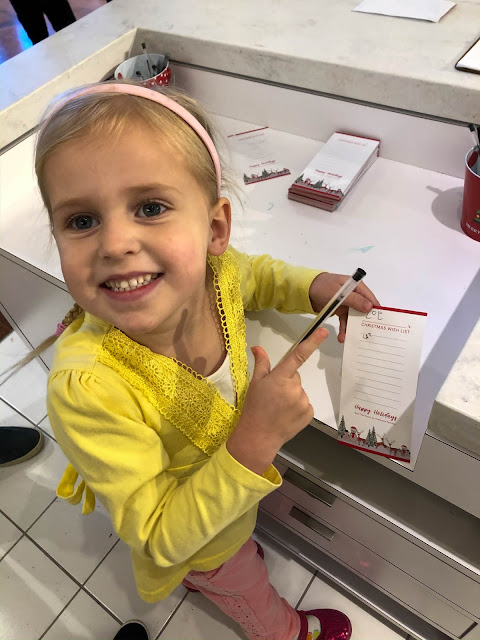 She wants a cat. I don't know about that and Santa didn't either so he told her that he might be able to bring her a toy cat but that real cats are usually up to Mom and Dad. He doesn't transport live animals.

Honestly, I'm not sure she has any expectations for what she wants and will probably be happy with anything (or, depending on her general mood when waking up, disappointed with anything). I think she just wrote down something she was comfortable spelling because after she wrote "cat" she wrote "dog" and she is terrified of dogs (so I really doubt she actually wants one).

When it comes down to it, she could probably use a support animal to ease her anxieties. She was too afraid to approach the Clauses, so Rachel took on the role of her "support Rachel," as she called herself. Rachel hadn't been planning on having her picture taken with Santa but she was a good sport about it.

Alexander very bravely (and surprisingly) tolerated sitting on Mrs. Claus's lap (I didn't think we should even attempt a turn on Santa's lap because Alexander's has this thing about beards (they are weird, you have to admit)). 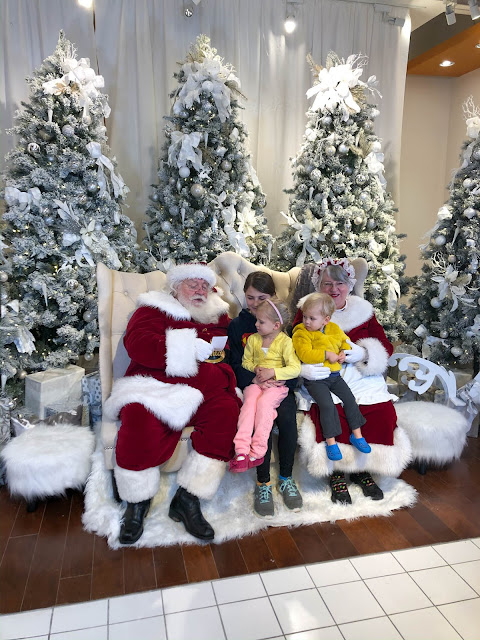 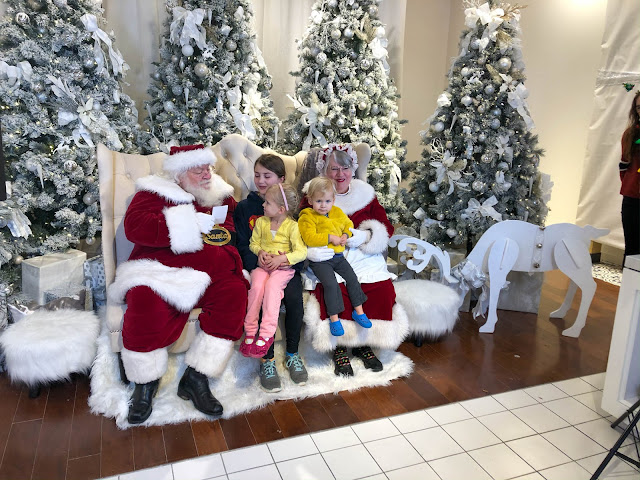 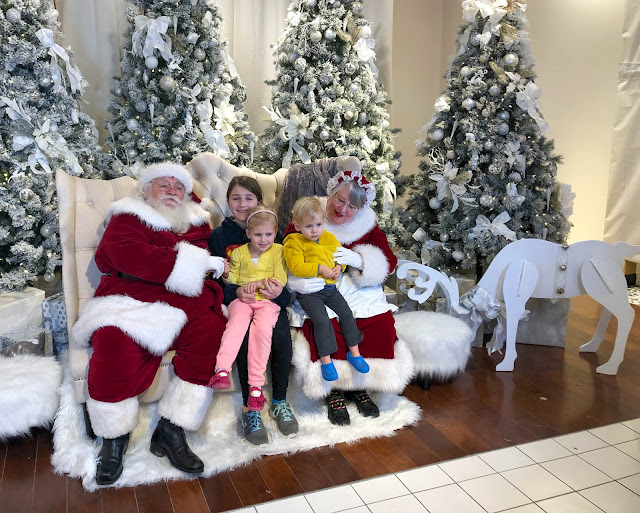 As much as Alexander outwardly looks like he's merely tolerating this Santa-encounter, inside his spirit was thrilling. I know this because the minute we walked outside he started happily chatting about how he saw Santa!

I know, buddy. I was right there. I saw you see Santa!

The way he went on about it you would have thought he had had a jolly good visit with Santa, rather than completely stone-facing him. Oh, well. As long as his memory of the visit was a good one, that's all that matters. In his mind he was brave and the visit was exciting and jovial.

Zoë was also thrilled about meeting Santa. Benjamin has been regularly reminding her that Santa isn't real, but she so desperately wants to keep believing (because she's four, Benjamin, so back off!), so she was happy to announce to everyone at dinner that she saw Santa in the flesh and that he was, in fact, very real.

Alexander is just learning about who Santa is and what he does and rather likes the idea of him. He and Zoë have both been singing Santa Claus is Coming to Town quite a lot lately. But Alexander still isn't quite sure what Santa does, but he concluded (perhaps due in part to having watched Klaus and because, you know, Santa makes special deliveries) that Santa is a mailman. He'll probably tell you all about it if you ask him.

While making our way back to our car we stumbled upon the line for the carriage ride, which wasn't nearly as long as Santa's line, so we decided to go ahead and stand in line again. 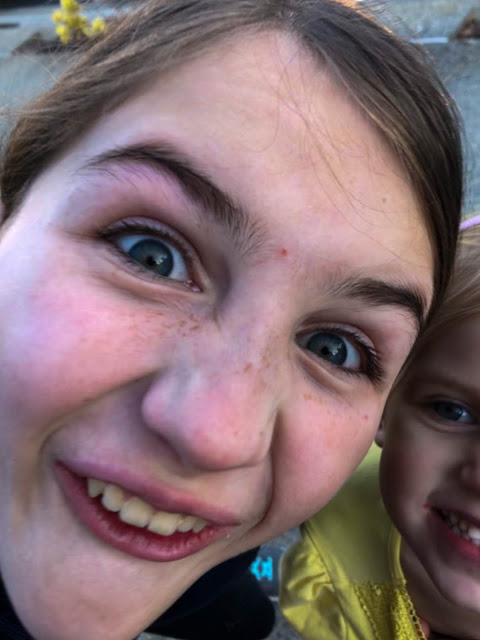 The only problem was that as the sun was sinking in the sky the temperature was also dropping. The rest of us were fine in our sweaters, but Zoë had stubbornly left hers in the van so she was extra chilly, but not chilly enough to give up the chance to ride in a one-horse open...carriage (she wouldn't let me say sleigh, and rightly so because this carriage had wheels). 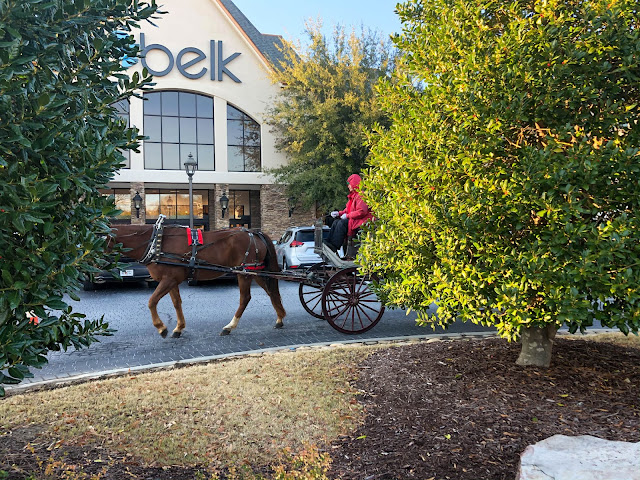 Here I am getting my arm-day in: 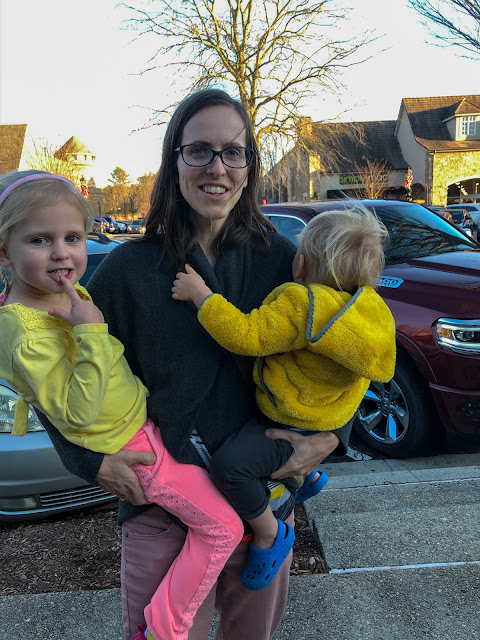 Even standing in line with these kiddos is a workout! 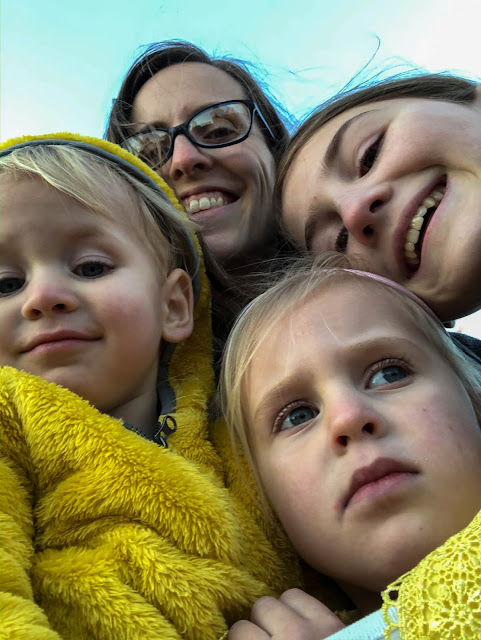 Rachel tried to give my arms a break, but Alexander always fussed and squirmed until he'd end up back in my arms. Silly boy! 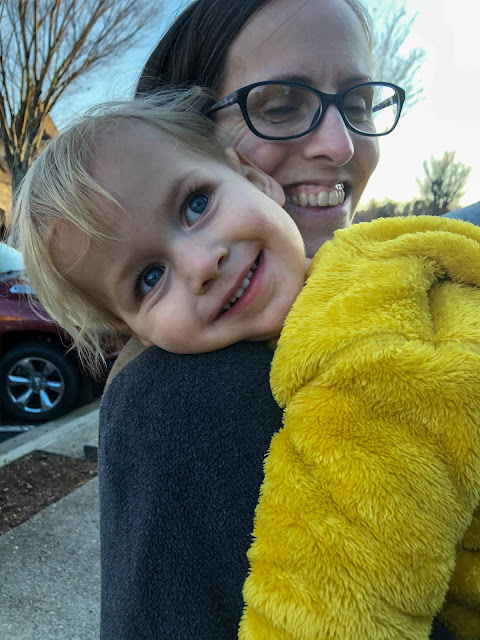 Here's chilly Zoë with her arms pulled into her shirt to keep warm: 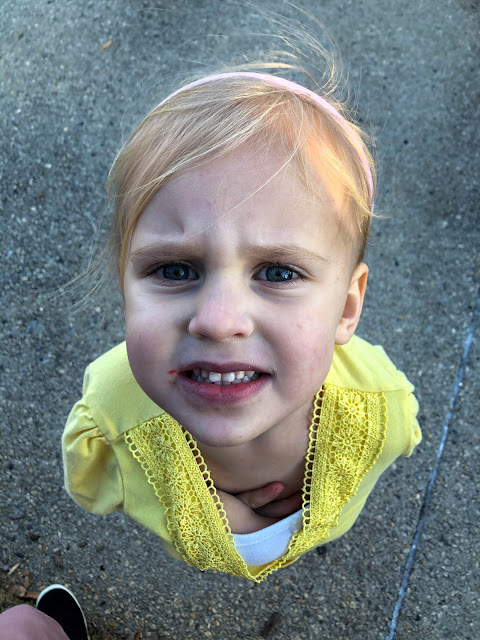 And here we are, finally on the carriage (the last ride of the day!), huddled close together to keep Zoë warm. It was only about 50°F (10°C), so don't worry about her being too cold. 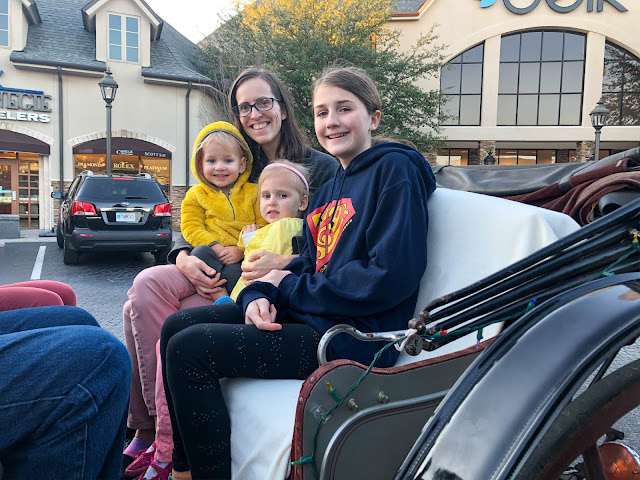 Here's our last shot of the day—the kids enjoying their candy canes in front of the big Christmas tree in the mall square: 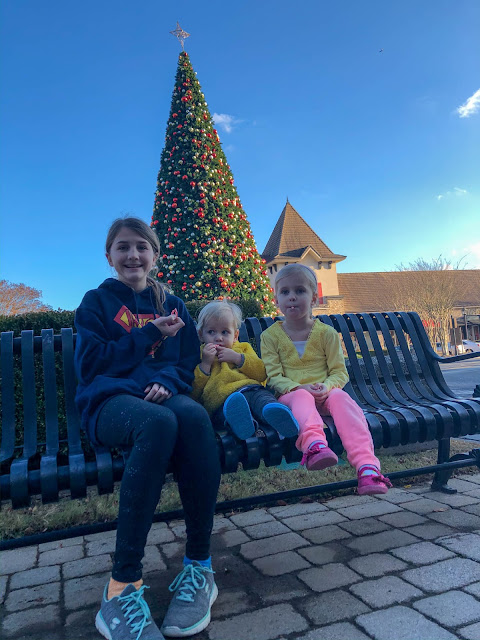 Miriam was home by the time we got home. She had a fun time at her friend's house. Last night her friend had spent the afternoon with us and the girls spent some time making some clay ornaments. Here's Miriam with a little fireplace she made (I put the string on it this evening so we could get it out of the kitchen): 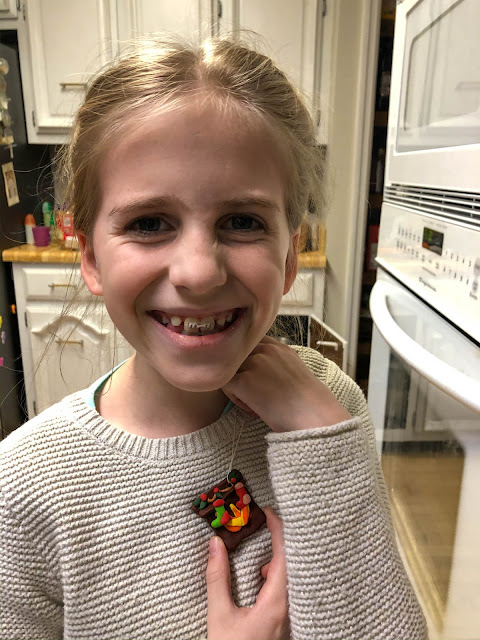 And here's Benjamin, the toothless wonder, who had a fun time "keeping Dad company." While we were out Andrew pulled out one of Benjamin's wiggly teeth, that had had a sneaky adult tooth grow up behind it. And then Benjamin bumped his mouth while he was playing and came to Andrew whining about another tooth, which Andrew also yanked out. So now Benjamin seems to only have a handful of teeth left in his mouth at all! 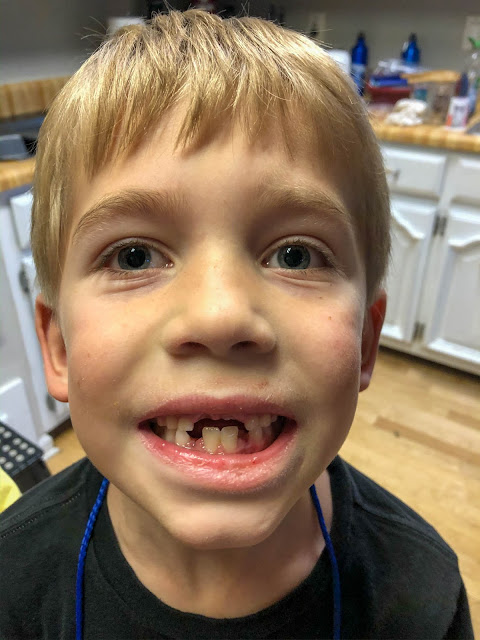 Rachel and Miriam both lost teeth this past week as well, so if you're keeping track, that's six teeth that our children have lost in the last month. It feels like every time we turn around someone is coming to us with teeth falling out of their head! Zoë is feeling a little left out and has been wiggling her teeth to no avail. They'll probably stay with her for a couple more years, poor thing.

Here's Alexander and I singing Santa Claus is Coming to Town before bed: