Andrew played the organ again yesterday since our organist is still out of town. This was fine because Andrew enjoys playing the organ. It does mean that I have to sit with all the kids by myself, but this is getting to be less and less work as time drags on. They're pretty good at sitting still these days (at least most of them are, for the most part, good at sitting still).

Rachel gave her first talk in sacrament meeting, which she wrote all on her own (though I did edit it a bit and coached her on some rewriting (mostly for clarity)). She was so nervous that her face turned pink, but she did a great job (and next time she'll do even better because she'll know there's not so much to be afraid of—with public speaking, I mean).


At the beginning of every year, my family chooses a number of scriptures to memorize over the course of the coming year. Usually we choose twelve so we can work on memorizing one per month. We work on them while we're in the car or when we need a shorter scripture study session. Some of them are easier to remember than others, but in the long run we've been able to memorize our entire list of scriptures each year.

When I was seven or eight we were studying the New Testament and one of our memorized scriptures was James 1:5–6. It says, "If any of you lack wisdom let him ask of God, that giveth to all men liberally and upbraideth not; and it shall be given him. But let him ask in faith, nothing wavering. For he that wavereth is like a wave of the sea driven with the wind and tossed."

This scripture was easy for us to memorize because it was the scripture that inspired Joseph Smith to pray about questions he had, but also because my little brother would always end it by saying "into a volcano," so we all started ending that scripture the same way: "he that wavereth is like a wave of the sea driven with the wind and tossed...into a volcano."

But that's beside the point.

This scripture teaches us that when we have faith, it will be easier to gain a testimony. When Joseph Smith read this because he didn’t know what church to join, it helped him have faith that if he asked for God’s help, he would get it. He prayed in a quiet grove, and Heavenly Father and Jesus appeared to him and told him he would have to establish a new church. Because of Joseph Smith’s faith, we have The Church of Jesus Christ of Latter-Day Saints established on the earth today. Without faith, we would not have our church today, but without Joseph Smith’s work, we would also not have it. He had to have the faith to pray and to translate the Book of Mormon, but he also had to be brave and work to start the church.

So, we see that Joseph Smith had to have faith, he had to pray, and then he had to act on what had been revealed to him on faith.

Likewise, but on a much smaller scale, our family has to really work on memorizing our scriptures; we can't just say we have faith that we can memorize the scriptures we’ve chosen and expect to have them magically stick in our minds. We have to work at it, too. We believe (or have faith) that we can finish memorizing these scriptures every year, but without practicing them we wouldn’t stand a chance at memorizing them.

This is because faith requires action. James 2: 17-18 explains this well. It says “Even so faith, if it hath not works, is dead, being alone. Yea, a man may say, Thou hast faith, and I have works: shew me thy faith without thy works, and I will shew thee my faith by my works.” This means that you cannot have faith in something but not try your hardest to make it happen. That would be like saying “Oh yeah, I’ll finish this thing! Definitely! I will for sure do it on time!” and then just… not doing it. Nothing happens if you do nothing. Another thing I relate this to is asking Heavenly Father to help you finish reading the Book of Mormon and then not actually trying your hardest to read it. You had enough faith to ask God for help reading, but you never did the work, which was actually reading.

Acting in faith actually serves to increase our faith because action brings about results. James 2:22 says, “Seest thou how by faith wrought with his works, and by works was faith made perfect?” This tells us that by having faith and taking action, your faith is made perfect, or stronger.

I bear my testimony that doing good things will help strengthen your faith, and that faith will help you do good works. In the name of Jesus Christ, amen.

Miriam sang I Will Walk with Jesus in a little quintet of girls from her primary class (which will be the oldest primary class next year). This morning Miriam finished reading both the Book of Mormon and the New Testament. She showed me all the notes she took on her phone while reading, mostly noting special verses and little thoughts she had (which I thought was a very studious way for her to read). She pointed out this poem that she wrote in her notes (and which she gave me permission to share):

Benjamin was having trouble sitting still so in between running Alexander to the toilet (he really needed to do a BM but really didn't want to, so it was this whole thing) I introduced him to the dots-and-boxes game.

Zoë wanted me to walk her to primary after sacrament meeting, so I did. She held my hand, skipping happily along, her cute curls bouncing on her shoulders, and when we got to the primary room she said, "Okay, bye, Mommy!" and skipped in through the door.

"That's exactly what we're going to do with you, okay?" I said to Alexander.

"Really?" I asked him (because in the morning he had told me "no way!" when I asked him if he was going to go to nursery alone).

"Yup!" he said, chatting happily all the way. "I won't cry. I won't be sad. We have snacks. We have singing time. We blow bubbles. We colour. We play with toys. I like nursery!"

"That's so great!" I said. "So we'll just open the door and you'll walk on in and when you're finished, I'll pick you up, okay?"

He was perfectly brave...until we got to the nursery room. I opened the door and he froze.

He was doing so well (though he did come check on me every few minutes ("Can you stay?" he'd plead)) and was very nearly ignoring me, so when they started colouring time I whispered to one of the leaders that I was going to try escaping. We only had ten minutes left and I was sure that he (and they (because they seem to be part of the problem; they only ever give him a minute or two of screaming before they come find me)) could survive ten minutes without me.

When I picked him up, he was smiling...but his eyes were red and blotchy and he was licking snot off his lip...and he told me about all the fun things he did at nursery (and bragged that he'd gone to nursery all by himself). So perhaps this was a turning point for him! Sneaking out at the end of nursery (rather than at the beginning) might have been the key to transitioning him into his class.

At any rate I can hope.

Here are a few pictures we took after church...

Zoë with her sweet curls: 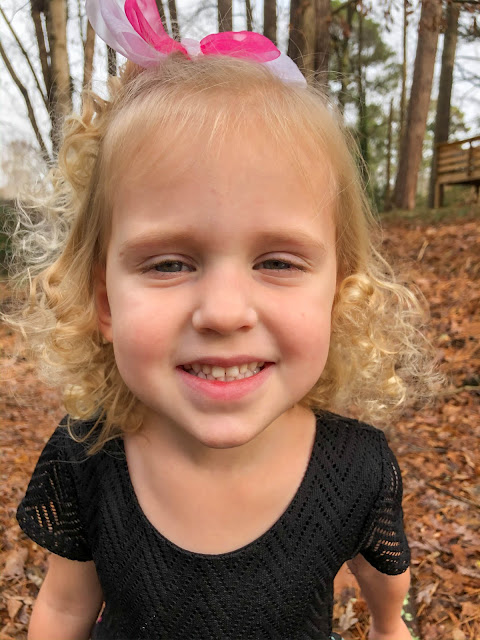 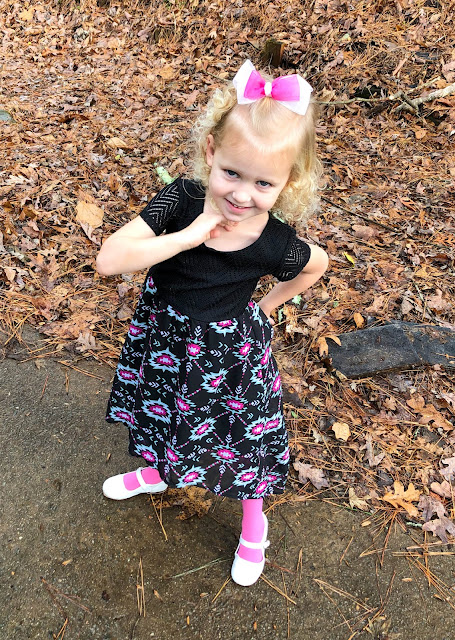 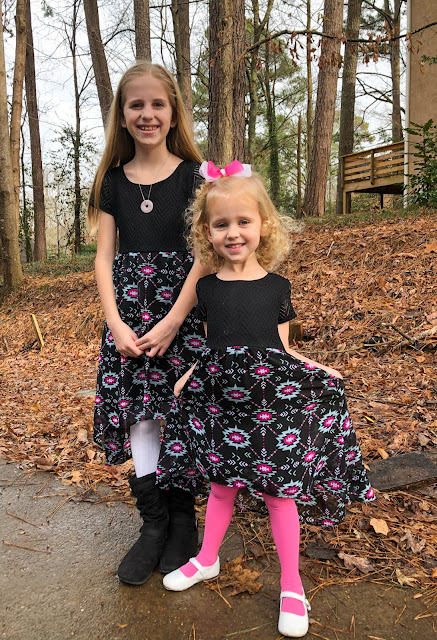 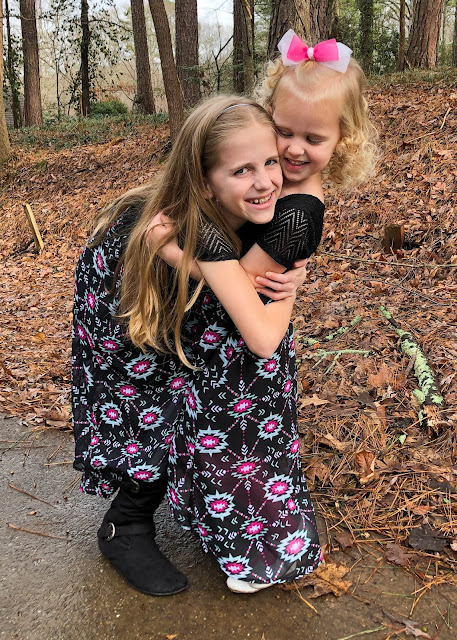 Me in my new skirt from my mom (it has pockets): 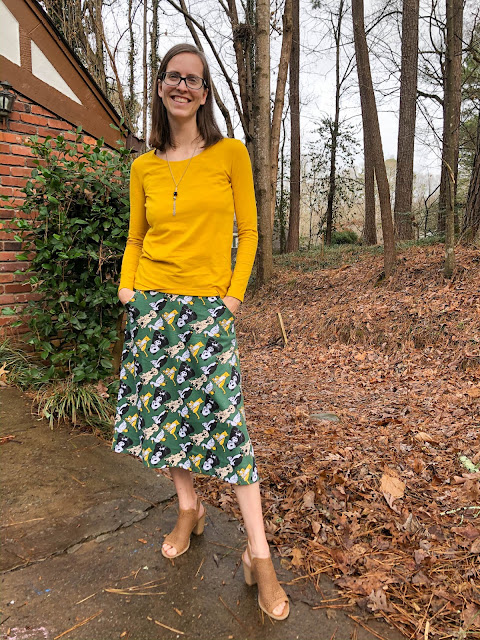 And Zoë's hair at dinner, after her curls had relaxed a bit: 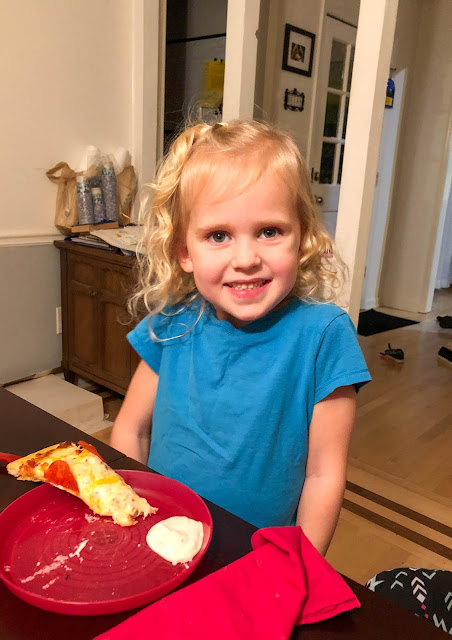 We had pizza because Andrew ran to the store late on Saturday afternoon and picked up some take'n'bake pizzas for dinner when he was out. But I had already started making dinner—fresh broccoli soup and fresh tomato soup to go along with Miriam's sour dough bread (Miriam made a new sour dough starter since our old one (that survived the move from Durham to Spanish Fork, but not the move from Spanish Fork to here) died and it's a good one and she's become quite the little bread maker over the past few weeks). Sometimes we're not the best at communicating our intentions (but at least our intentions are good).