Not to make us seem totally accident-prone over here, but...

Alexander touched a hot pan this evening. I had just taken it out of the oven and put it in the center of the table (which Alexander cannot reach without climbing on top of the table itself), and cautioned Alexander not to touch it (which, again, would require him to climb on the table to do). Then I went about finishing up dinner and called everyone to the table and sat down.

"Hi, Mommy," Alexander, who was sitting serenely on his chair, said.

Then he stuck out his lip, held out his hand, and whispered, "I touched it."

The poor boy had a lovely little blister swelling up on his hand! But he hadn't yelled or cried or panicked at all. He just calmly informed me that he had burned his hand.

"Well, quick!" I said, pulling the pitcher of water over to him. "Put your hand on this. It's cold." 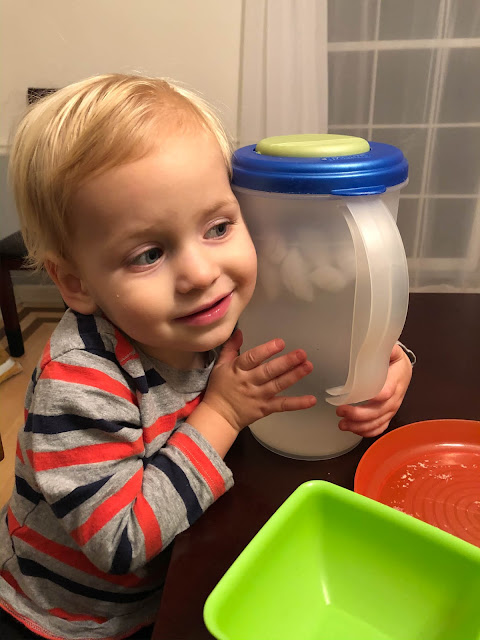 He and that pitcher became fast friends. 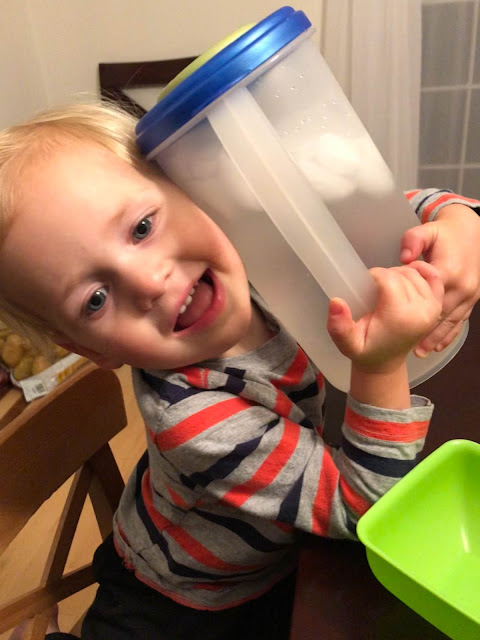 Before putting the kids to bed I made them do a five-minute tidy in their bedroom, which goes from spotless to disastrous as quickly as...anything that happens in a short amount of time. It was in a disastrous state and needed a little TLC. In addition to the timer that I set, the kids decided to set out their little two-minute toothbrushing timers, which inspired Alexander to find his little timer as well. He carried it around with him while he picked up all (or at least the bulk) of the Duplos that were scattered around his room.

I wasn't quite sure what he was doing (or where he was) but I knew I wanted to film him asking me to "put" him down when I clearly wasn't holding him, so I went to his room with the camera in front of me. He does not like to say things when he knows I'm filming (though he does want to watch himself (do nothing) afterward), so the first little bit of this video is him saying very little.

And then I threaten to leave without first getting him down, which causes him to lose his guard and speak while being recorded.

I still have to catch him singing O Christmas Tree, which is somehow one of his favourite songs to sing (although I honestly am not sure where he heard it first). Anyway, he was singing it on the way to church on Sunday but everyone was too loud to get a good video. He sings, "O meh-meh-nee! O meh-meh-nee!" And it kills me.

But not as much as Andrew's antics do.

He went to the doctor on Monday morning and the doctor said that the bruising pattern on his knee is "a textbook MCL tear," which I guess is a better ligament to tear than the ACL, so, like, that's good news. Andrew went in for an MRI today to make sure things aren't too messed up in his knee (and since we haven't met our deductible yet this year we got to pay for that out-of-pocket, so Merry Christmas to us! And then since it's so close to the new year we'll get to start on our deductible all over again in January. Super yay! I just love our health "system" in the States, don't you?). He also got a nice knee brace for himself, which is a lot more comfortable than the ace bandage he'd been using. Unfortunately it's still not as comfortable as not needing a brace at all.

"Man, this brace really digs into my leg right here. I don’t know why. It doesn’t bother my other leg," he told me.

We both started laughing so hard we couldn't speak. When we finally could he said, "Well, that explains that mystery!"

He put a fuzzy sock between the brace and his leg where it was rubbing funny and has been much happier since.
Posted by Nancy at 11:45 PM