Early this afternoon while the kids were doing some research on their chosen countries (Miriam is researching Thailand and Benjamin is researching Scotland) I went upstairs to clean off the roof over our back deck.

Here I thought we were all smart to move to the south—no shoveling snow, you see. But instead I find myself dealing with leaves. We ordered one of those telescoping roof rakes (for snow removal) so that we can use it...on the leaves! It's ridiculous, but the deciduous trees surrounding our house have almost finished dropping their leaves for this year so we should get a little reprieve soon.

Leaning out the bedroom window, I first used the leaf blower, but I could only reach so far with that so then I stretched out the rake and started pushing leaves over the edge of the roof. While I was awkwardly wielding this 20 foot pole, I noticed a horrifyingly huge bug calmly walking up the roof toward me. It was a suspicious-looking bug—some sort of assassin beetle, I thought—so I tried taking a picture of it so that I could identify it but I couldn't quite get the camera to focus on it (it camouflaged so well with the shingles). So I called for a jar.

Miriam came running up the stairs with one and I trapped it easily. This bug is rather ginormous and...oh...so...slow. I couldn't miss! 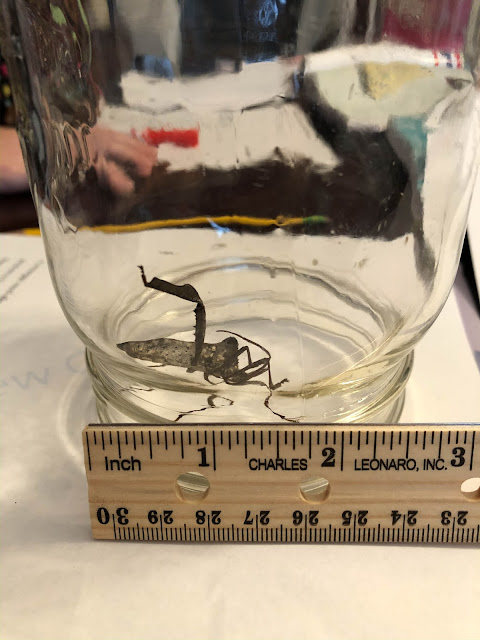 With a little help from my friend, the internet, I determined our specimen to be Acanthocephala declivis, a giant leaf-footed bug. This was wonderful to learn because ever since finding my first assassin beetle—scary, well-armoured beetles like our friend A. declivis here—and doing a little research and learning about kissing bugs (specifically Triatoma sanguisuga and T. lecticularia)...well, I've been terrified of ever finding one around my house because they can spread some pretty nasty parasites.

Giant leaf-footed bugs do not, which was good news for us because Alexander swiftly claimed this bug as his very best friend of the day.

Here's Alexander speaking to his bug (and then arguing about Miriam about whether or not it was a ladybug):

And here he is trying once again to engage his new friend in conversation:

Miriam was pretty nervous about Alexander ever even slightly lifting the jar (note her hand pressing it back down repeatedly in the first video clip (and mine in the second, but only because I promised her I wouldn't let the bug get out) and in the picture below): 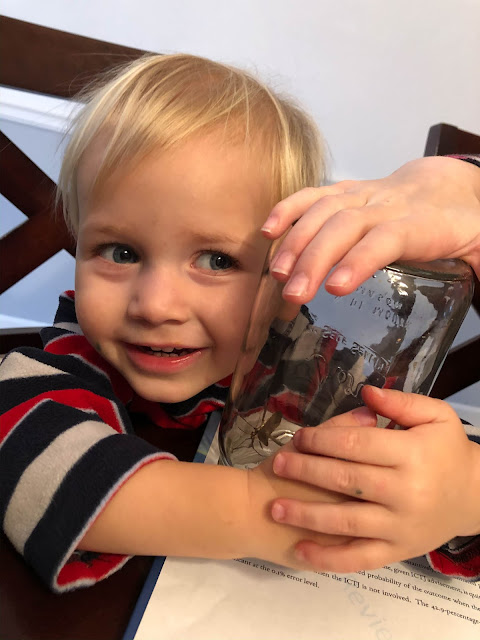 But once we poked holes in an old jar lid and screwed that on tight she relaxed quite a bit and Alexander enjoyed visiting with his bug without his sister squealing every few seconds. 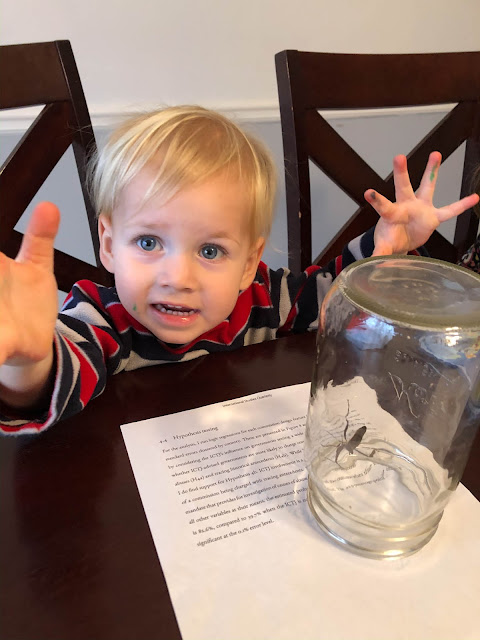