Yesterday I took the kids to the playground to have some run-around time and instead of running around they just picked on each other the entire time. We stayed for a little over an hour and there was literally never someone not crying. I was so frustrated that I actually stormed off to the van, hopped inside, and drove over to the next parking lot—just to shock them all into silence. It worked.

They were all very sorrowful after that.

On the way home—when I had all the kids in the van with me—I told them, "Thanks for getting out of the house with me so that we could fight somewhere else. I was getting sick of fighting at home, so this was nice." Because sometimes I'm passive aggressive like that.

And then I told Andrew that we needed to get out for a family adventure, so we decided to head downtown to visit the Martin Luther King Jr. sites. It would be a nearly-timely visit since MLK day is later this month but, I hoped, wouldn't be too crowded (yet), and it wasn't. I was worried that we wouldn't be able to find a parking spot in the lot, but we did (easily) and we enjoyed a little walking tour.

Our first stop was the visitor's center, which had some decent exhibits, I think, but I wasn't a fan of the layout at all. In the big room they had these weird circle-cubicles with pictures and information to read and a video to watch, so they were interesting, but it really killed the flow of the room. But, that's fine. Sometimes with little ones we have to move through museums like this quicker than we'd like, so we often find ourselves looking at things, taking notes of things to look up later, and then moving on before the kids get too antsy.

Andrew's knee is doing much better these days. I don't know that I ever updated on this, but it turns out that he tore his MCL, not his ACL, and this was a very good thing. The doctor said he could expect 6–8 weeks of pain and to slowly wean himself off his brace, but that MCLs usually heal pretty well without surgery or physical therapy. Andrew's knee still hurts but it's starting to feel better and he's starting to be able to do more. Still, he used the stroller like a cane of sorts today (it was quite a bit of walking for him to have to do, but better than the zoo—ha! Our library has a partnership with the zoo where we can check out an informational video about the zoo and then return it to get four free tickets, so I suggested that we do that over Christmas break (because the zoo movie was available at our branch at that moment) and Andrew enthusiastically agreed and then I was like, "Oh, but your knee..." and he was like, "Oh, so much walking at the zoo." The zoo would have killed him, I'm sure, but a couple hours downtown was fine; we'll do the zoo later on).

Here are the kids at the reflecting pool by the tomb of Martin Luther King Jr. and Coretta Scott King: 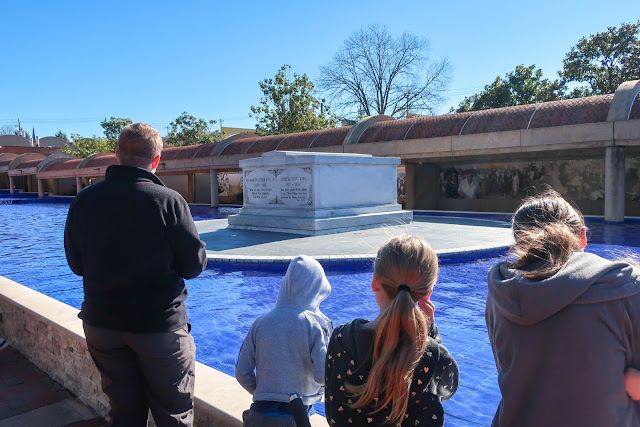 Here's Zoë expressing her disgust that we'd just passed a sign that said to not throw coins into the reflecting pond and yet there are coins in the pond so someone had clearly been breaking the rules around here (rude): 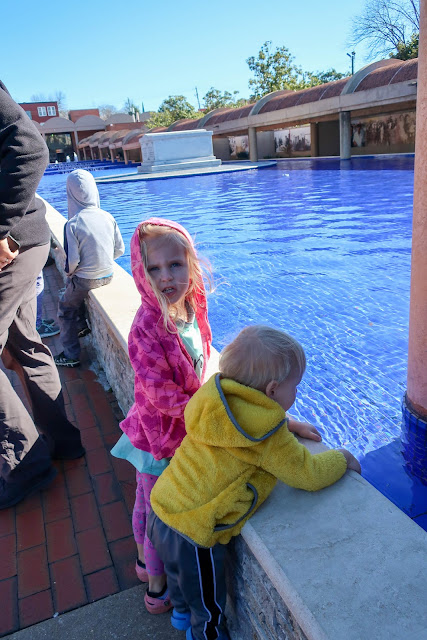 The reflecting pong waterfall says, "We shall not be satisfied until justice rolls down like water and righteousness like a mighty stream": 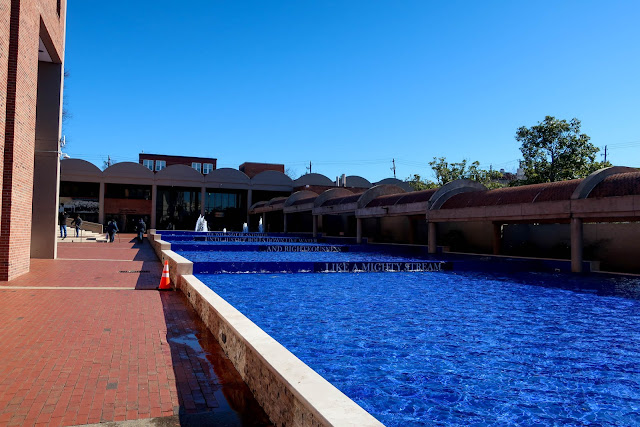 Here's Alexander posing by the water, the only one to listen when I asked everyone to gather for a picture: 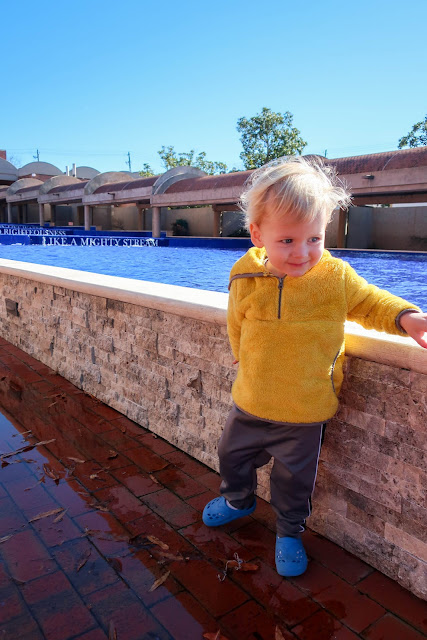 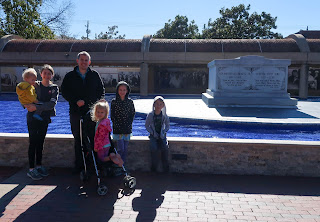 Here's Miriam trying to avoid playing the piano outside (with a sign nearby beckoning passersby to "make a joyful noise"); she did eventually sit down to play. 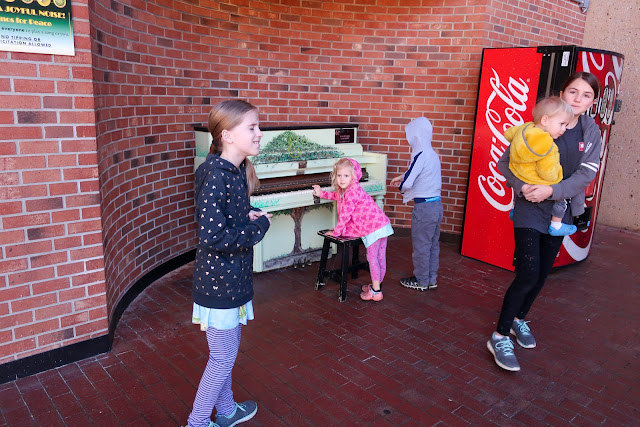 Inside the center there are rooms devoted to Rosa Parks, Martin Luther King Jr., Coretta Scott King, and Mahatma Ghandi (though that room was closed). There was also a statue of Mahatma Ghandi outside of the visitor's center, which Rachel thought was quizzical because she'd heard that Ghandi was racist. It's true that he's been accused of such things (take this article from the BBC, for example), but Martin Luther King Jr. found inspiration in Ghandi's methods of non-violent protest.

I'm not sure that I'm qualified enough to make a statement on the matter. I do know that when we look into the past with the knowledge we're armed with today, the people back then often seem to have gotten things backwards (the good guys and the bad guys, who usually all end up being somewhat grey characters, anyway). Life is messy but I think, overall, that Ghandi fought a good fight and did his best and inspired other people to be better (and, yes, probably mistreated a few people—or even groups of people—along the way). He learned as he lived and his ideas grew with him. Should he be disregarded as a hero because of some misguided (but culturally supported, at the time) ideas in in his youth? Should he be worshiped as a saint because of the good he did when his ideas had matured? Perhaps the best course of action is to discuss his successes and shortcomings and let him be a person in history (who hurt some people and helped some people, like we all do).

After all, MLK had his own shortcomings.

After visiting the center we walked down to the Ebenezer Baptist Church where Martin Luther King Jr. and Sr. spent time preaching. 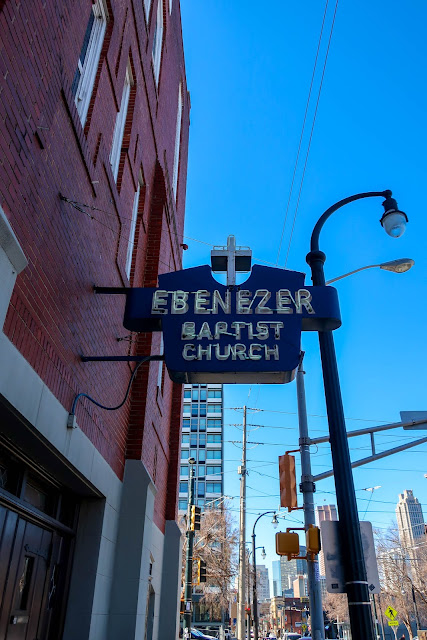 It was all set up for Christmas and looked beautiful! 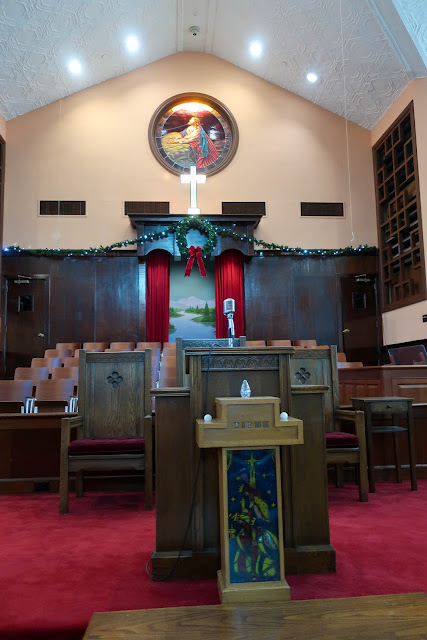 We then took a quick stroll up Auburn Street to find the house where MLK was born. 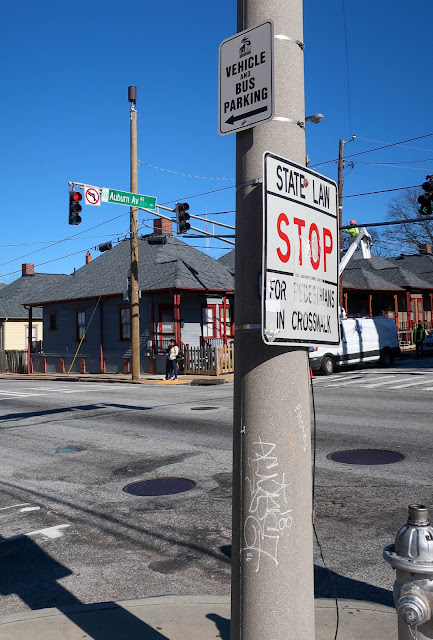 The houses across the street were all so little and cute and close together (the houses on the King's side of the street are a little more stately than these). 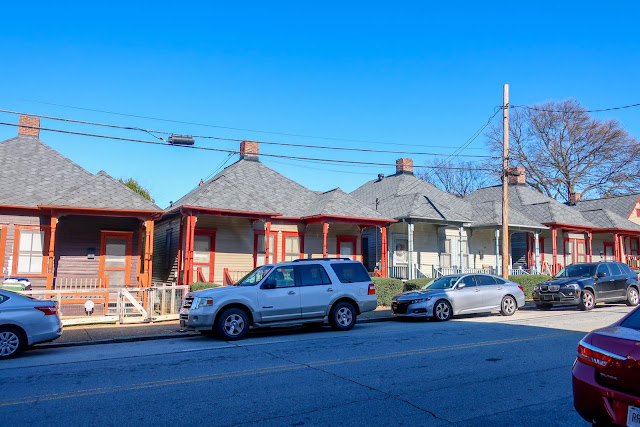 This neighbourhood was built during the Victorian Era when "gingerbread flourishes" were quite popular (I learned from reading a sign outside of the gift shop next door to the King residence) and was, at the time, a very white area. But "after the 1906 race riot, educated, middle-class blacks began settling here, and by 1910 the area was predominantly black" (a phenomenon known as "white flight"). 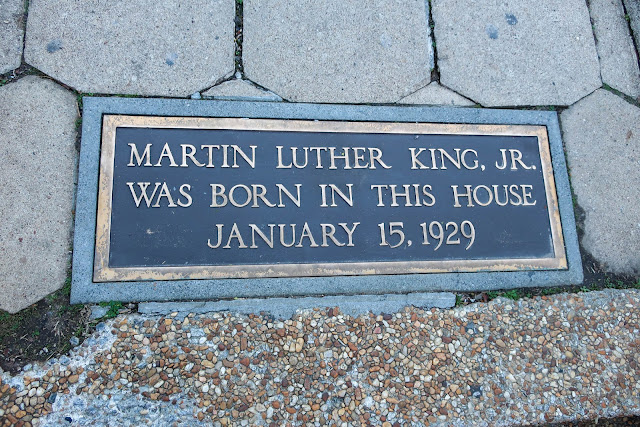 And so it was that King's family was living at this house when he was born in 1929. 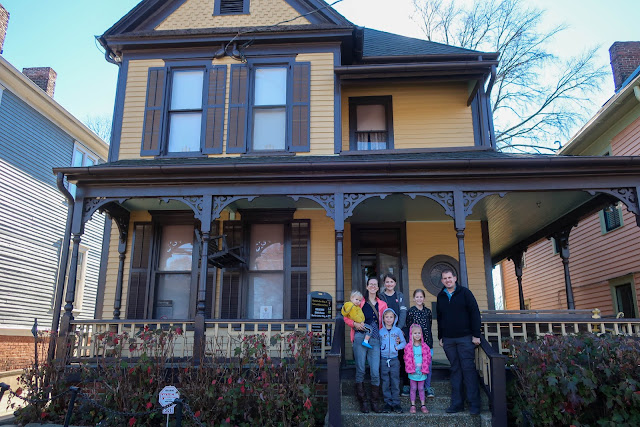 My younger kids were mostly concerned about how anyone would have managed to swing on the porch swing (so I explained that the curators of this home-turned-museum raised the swing specifically so that people could not swing on it). The house wasn't open for tours (with it being New Year's Eve) but I'm sure they have it down when the house is open and tours are going on.

We ended up at the playground near the visitor's center for a picnic and some playing. Somehow the children managed to play without screaming at each other constantly (a NYE miracle). 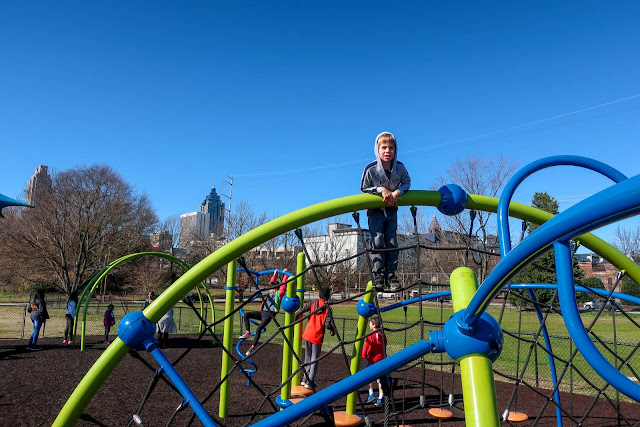 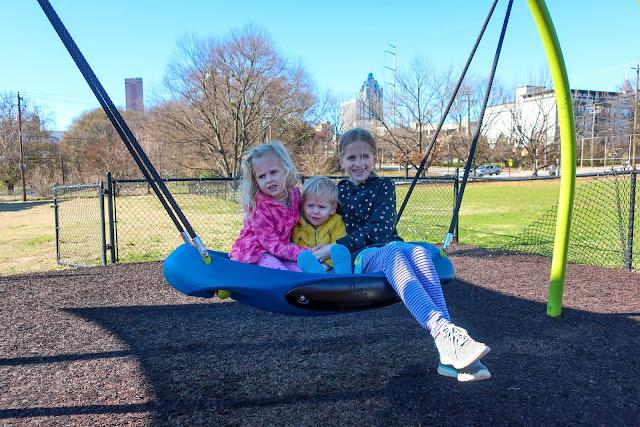 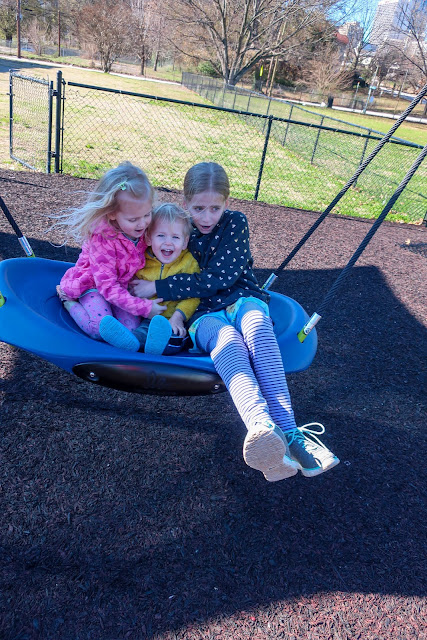 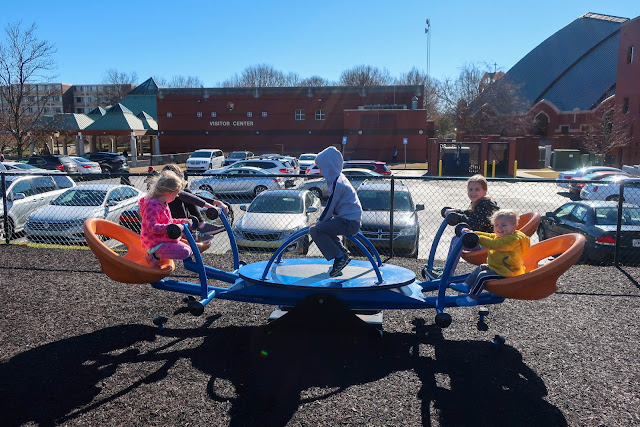 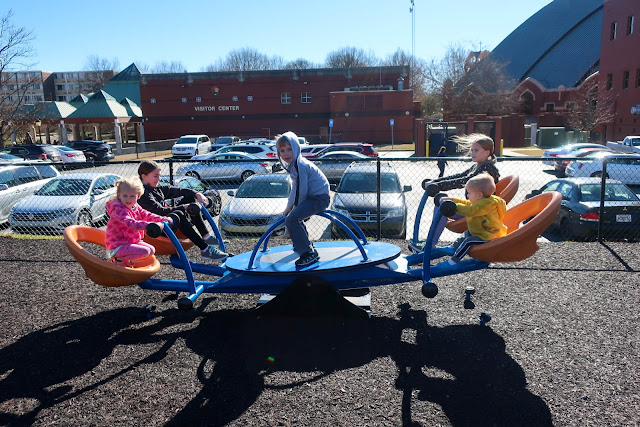 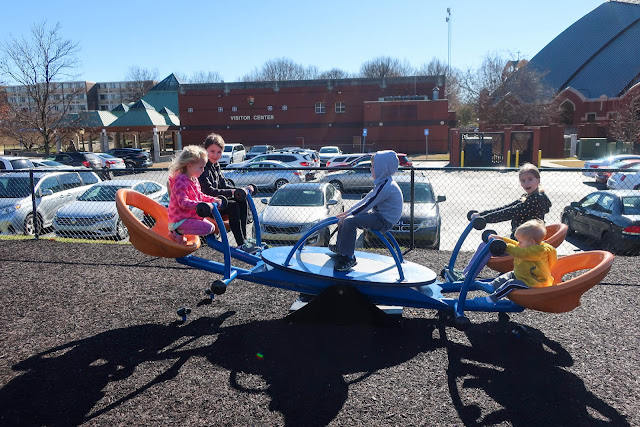 While we were sitting there, I noticed a homeless man loitering across the field from us. We hadn't finished all of our picnic food so I gathered some food (and my courage) and set out across the field to meet him. Not being 100% sure if he was actually homeless, I tentatively asked, "Are you hungry? We were just having a picnic and didn't finish all our food so I thought we'd share if..."

So I gave him a couple of juice boxes and granola bars, some carrots and an orange.

And I didn't feel remotely like a decent person for it.

For there was once a man named Sampson and my fifth great-grandfather thought he owned him. He thought he owned him because society allowed him to think such a thing. I don't think Samuel C. "Big" Weathers (the "big" because he had a son who went by "junior") was a bad man. At least, I don't think Samuel C. Weathers considered himself a bad man, and society, at the time, didn't either. Owning a man—taking away his agency, his family, his life—was his right. Samuel's life was made easier because he owned another man, a man who had to do his bidding or face severe consequences and who, I'm sure, wasn't well-rewarded for being an obedient servant.

Sampson, who surely was born a slave and died a slave, and was passed down in Samuel C. Weather's will to his son-in-law Daniel, bettered my family's line, made life easier for them, made them richer. My family battered Sampson's family line, separated them, impoverished them, enslaved them.

And even though that's all generations behind me, I can't help but wonder at my relatively easy life.

Because my ancestors experienced ease (at the expense of others), my life is easier today. Sure, my ancestors worked hard, as I would also dare say my family does today. But I can't help but wonder about that homeless man. Did he—or any other number of the downtrodden—descend from Sampson? Are my ancestors—am I?—the reason he didn't get the same comforts and opportunities I've known in my life?

Our society is still so broken, so many dreams are yet unrealized.

A juice box and granola bar doesn't come close to solving anything.
Posted by Nancy at 11:49 PM