Miriam had her organ recital the other night, which was a good practice for tomorrow when she and Andrew will play O Holy Night for our church Christmas program. It was a little difficult for them to pull this off since Miriam couldn't hear a note Andrew was playing (the organ is in her teacher's bedroom and the piano is down the hall in the living room), so hopefully they'll be able to coordinate better tomorrow when they're in the same room. (Also, I think the piano could use some tuning).

Given the circumstances they did great!

Here's the view from the audience:


And here's the view from inside the bedroom (where you can tell she's not hearing much of the piano at all once she gets the pedals going):

Here she is with her fellow students (though she doesn't really know any of them since they all do private lessons): 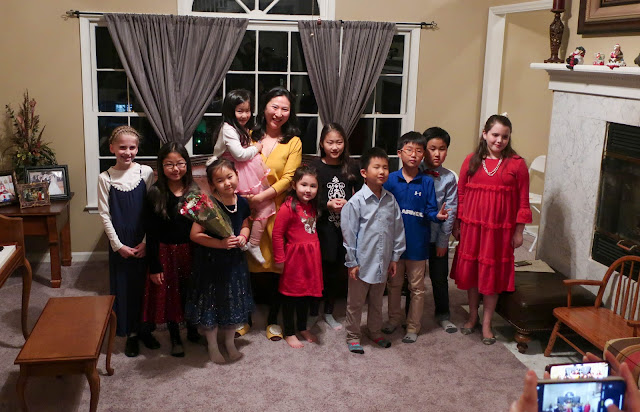 Most of the students did piano and a couple did piano and voice (the girl on the far right in the bright red dress has a surprisingly mature operatic voice—like, it was...whoa...I did not expect the sound that came out of her). Miriam was the only organ student, but that's alright. Her teacher is trained in all three. I listened to some of her YouTube videos before contacting her about lessons and she does some pretty amazing stuff! We're happy to have found her!

She said there would be "refreshments" after the recital, but it ended up being a light dinner, which was nice because we hadn't fed the kids before leaving for the recital. They had fun running around with all the little kids and eating far too many goodies for their own good ('tis the season for that, I suppose).

After tomorrow, Miriam can relax a bit. She's been putting in some rather diligent practice time to master this song but she's so happy she can play it now. It's covered in Grandma's handwriting and she loves it.
Posted by Nancy at 10:58 PM