Miriam asked me to put her hair in rags last night so she could have curly hair for church today. It was late when she asked, but I went ahead and did it because Christmas only comes once a year. Here she is with her beautiful curls: 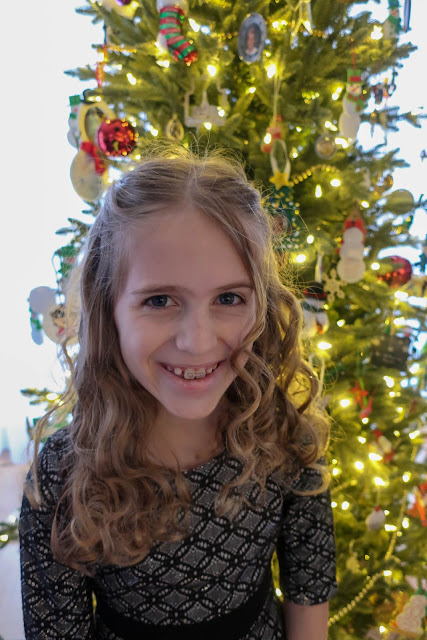 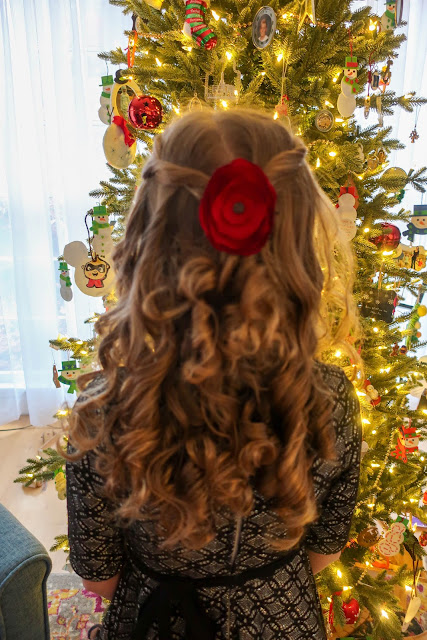 Perhaps now that she's older I can tell a story about 8-year-old Miriam that I've been sitting on for a few years because it's potentially embarrassing, but since it's now past-her and not present-her it's almost as if it's someone else. Anyway, soon after she had turned 8 and had gotten baptized, Miriam asked me if I would put her hair in curls for Sunday, so I did. It just happened to be a fast Sunday and she flounced up to the pulpit to say her testimony and she skipped back down to us, little curls bouncing. On the way home from church that Sunday she gushed about how she'd shared her testimony and "everyone saw my beautiful hair!"

Which is the entirely wrong motivation for sharing your testimony (but which I had thought, as I watched her skipping down the aisle, that that is what she had been wanting to show off all along).

There's no crime in wanting to look your best! Here are Miriam and Andrew posing in front of the Christmas tree before they left for church (we went in two waves today): 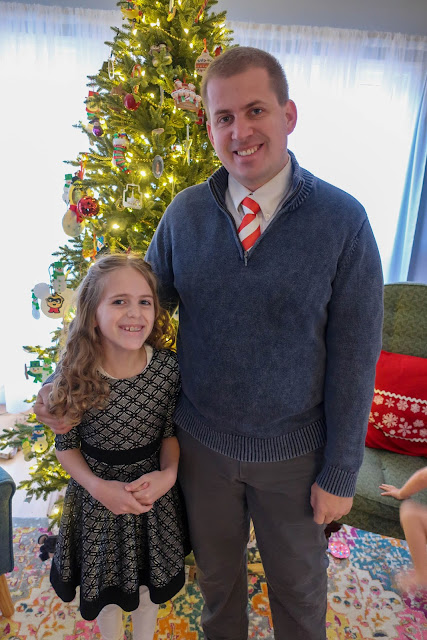 Here are Rachel and Alexander together in front of the tree. Alexander was so excited to dress up as a candy cane today. He decided all on his own that that's what he was (and he decided Rachel was one, too, since she was also wearing red and white). "I am a candy cane!" he kept telling everyone. 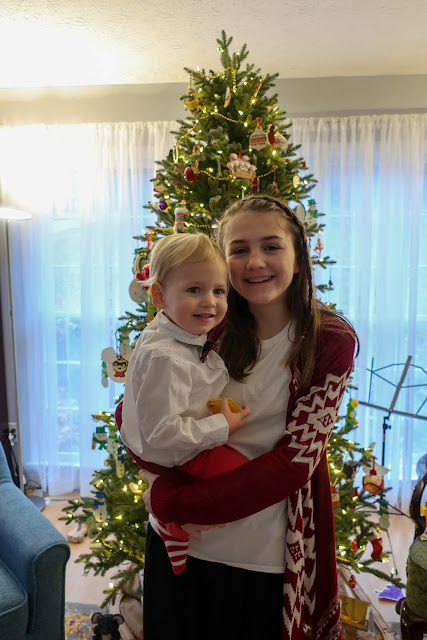 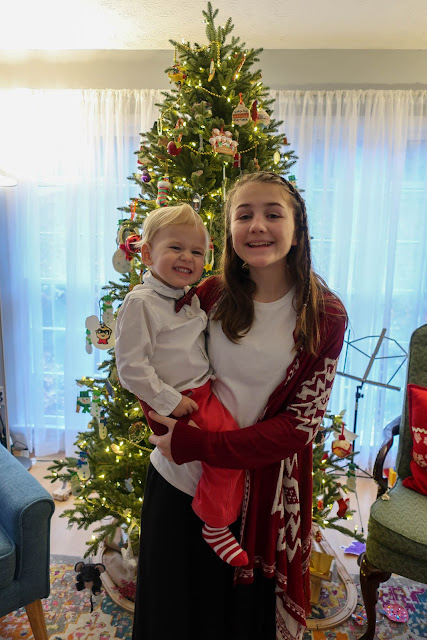 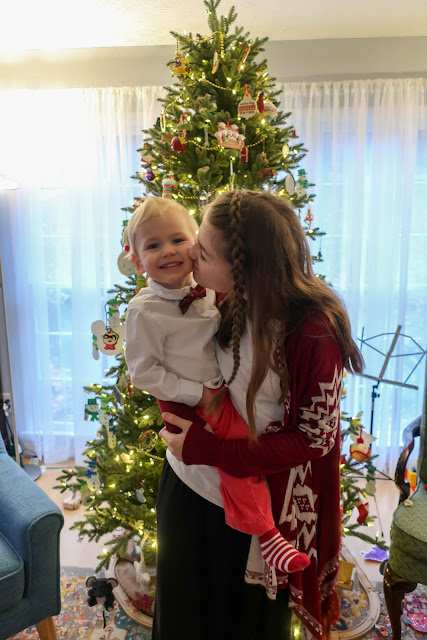 Here are the four that I took to church: 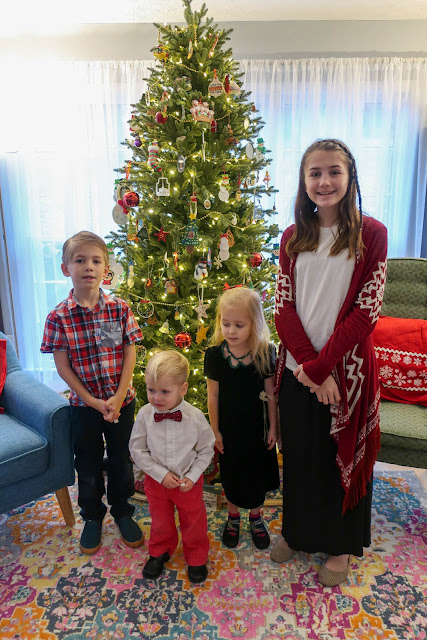 Alexander was having a hard moment because he didn't nurse this morning when he woke up (Andrew is helping him kick that habit while he's home the next couple of weeks) and when Alexander realized he had been tricked out of his morning nurse-y he decided he wanted a mid-morning nurse-y instead. But I told him no because we were just about to leave for church and it made him very, very sad (and, in fact, he didn't recover at all and was very weepy all during sacrament meeting because I was far too busy to give into his pleadings and eventually gave him a candy cane just to make him stop whimpering (which was a very sticky exception to my no-snacks policy during sacrament meeting)).

Here we all are after church in front of our tree with white lights: 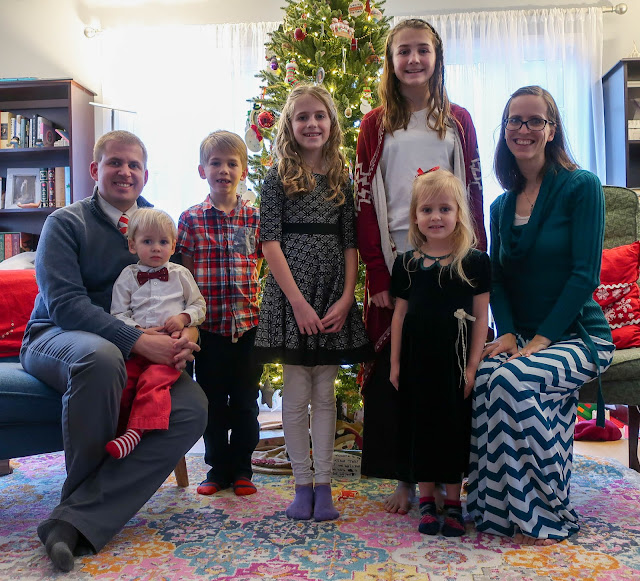 And with coloured lights (because the kids couldn't decide which one we should do and were fighting over it, but our tree can switch between the two at the click of a button so I told them it wasn't really a big deal at all; we'd just take more than one picture and they could call whichever one they liked best the "official" picture for this season): 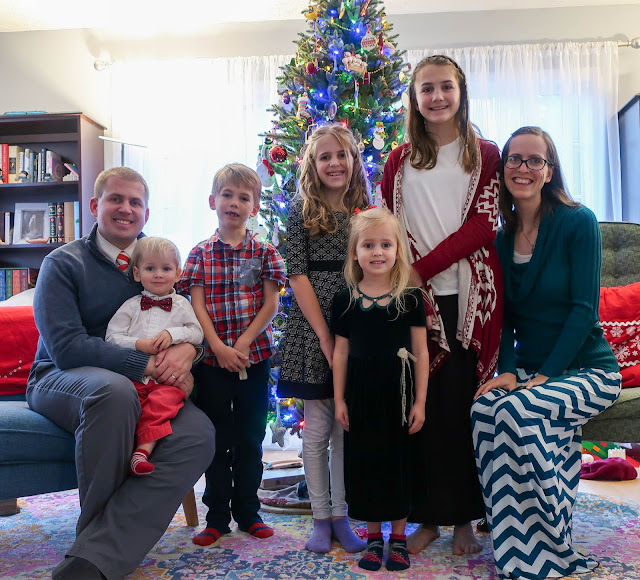 I should probably note that Miriam wore black boots to church so her purple socks weren't showing. She had a bit of a meltdown before her organ duet, actually, because she'd played prelude for sacrament meeting and then changed back into her boots and I didn't notice so I didn't tell her to just leave her organ shoes on. She was taken a bit by surprise when she realized she needed her organ shoes back on and was so flustered she couldn't undo the knots and started crying, so I ran up there (with sticky Alexander armed with a candy cane) and helped her undo the knots and catch her breath. And then I just stayed up there to turn the pages for her, which she felt helped her play better. She got through the moment and ended up playing just fine (for a second there I was worried she was just going to have a mental breakdown and not be able to play, but she pulled herself together and did great).

And here's Zoë, who claims she and I dressed up as Christmas trees (since we were both in green and had to be something since Alexander and Rachel were candy canes), in front of the tree by her favourite ornament (which is the cupcake by her shoulder, at least for today): 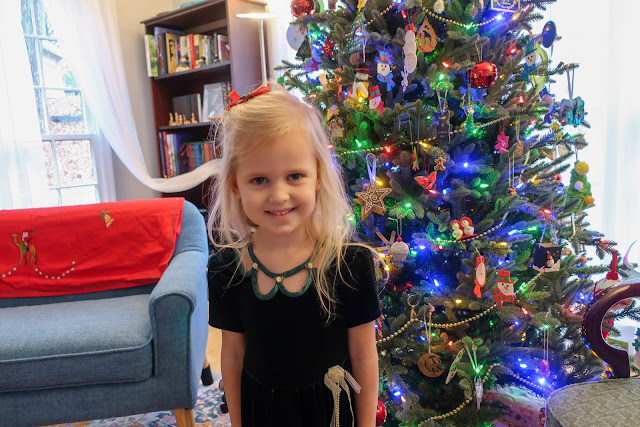