Last night I was putting a diaper on Benjamin before bed (he still wears diapers to bed) when I noticed a little speck in his diaper zone. Was it a scab? Was it a grain of sand? Was it a tick?

It was a tick, of course, busily feasting away. But wouldn't that be an interesting name for a TV game show—Scab, Sand, or Tick? Okay, it would be an incredibly boring show, but perhaps it could be pulled off with the right music and a good narrator.

Andrew pulled it out with tweezers while I pinned Benjamin down. We're two weeks shy of our first tick-removal anniversary, so it was about time to pick one off of someone, right? (The one I found crawling on my leg last month doesn't count because it hadn't bitten yet). I'm beginning to wonder if Benjamin's just tastier than everyone else since he's the only one we've ever found a tick on.

After the tick was removed, Benjamin was incredibly affectionate, giving "dinosaur kisses" to everyone. A dinosaur kiss involves a long rawr followed by a long kiss. 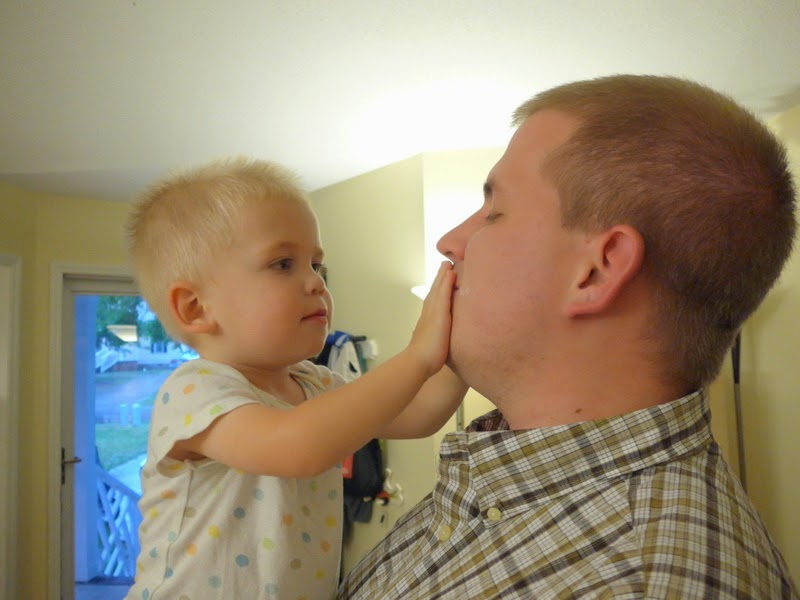 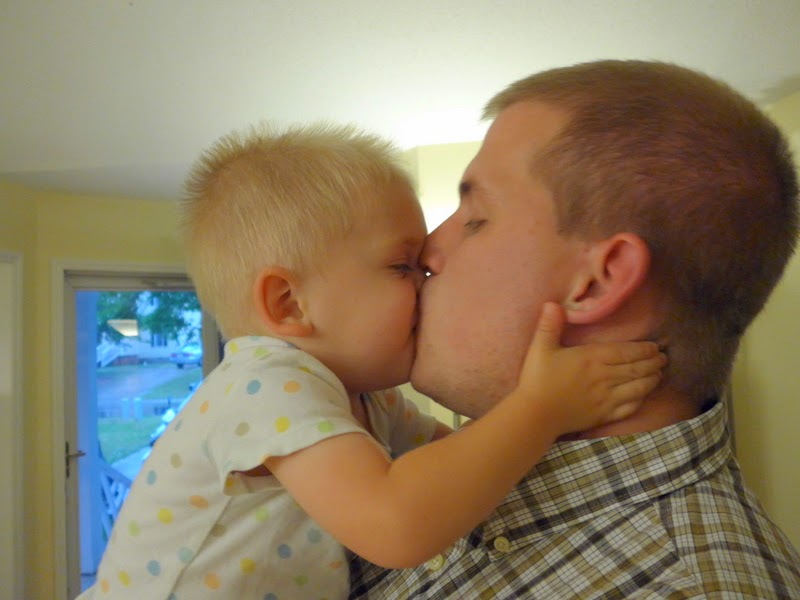 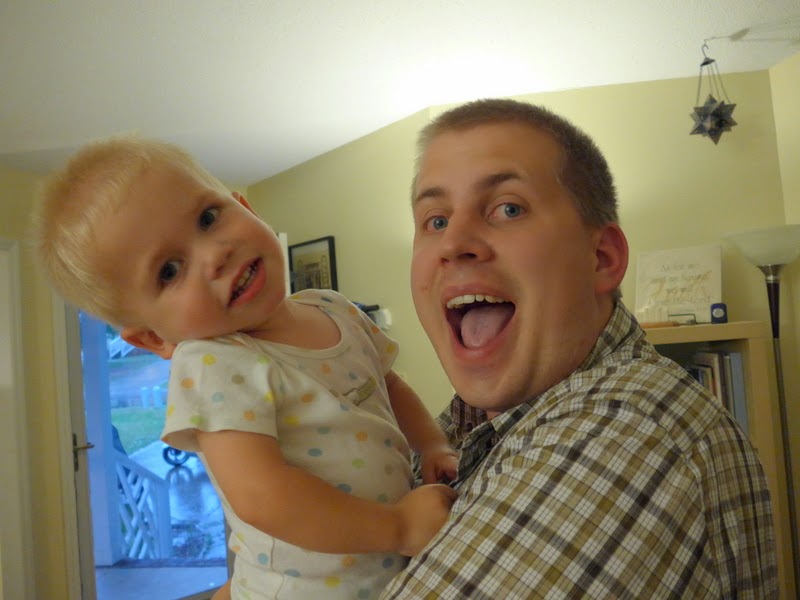 Putting Benjamin to bed was a struggle, as usual. I even let him nurse before bed (I haven't let him do that since I wrote that post about weaning; though he's still been nursing in the morning) and he was so excited and then nearly fell asleep in milk-induced ecstasy...but didn't. I was hoping he'd be easy to put to bed after nursing because he was so drowsy but I think he overheard the girls talking about me going to a "meeting" (it was actually book club, but that's like a meeting, right?) so he didn't want to let me out of his sight.

I was starting to feel pressed for time, watching the minutes tick by until the time my carpool was due to arrive, and listening to Benjamin wail, "Want Momma!" over and over and over again from his room.

I simply didn't have time to sit by him and pat his back until...eleven o'clock at night.

We tried everything and eventually found something that worked. I went in and sang Benjamin (another) lullaby. I explained that I had so many dishes to do so I couldn't sit with him but I would just be in the kitchen working and if he was a very good boy I would leave the door open while he fell asleep but if he screamed then I would have to close the door.

True to my word, I went into the kitchen and started doing the dishes. Benjamin was quiet for a minute or two before he started screaming again. I went to his room and reminded him of the deal.

It was mere minutes before my ride was supposed to come. Benjamin was still awake and we were getting desperate. And then I thought to myself, "Self, Benjamin hasn't gotten out of his bed to check if you're actually in the kitchen. He's just screaming in his bed. And you're saying the exact same thing to him every time."

In a stroke of genius I said, "Why don't we just make a recording of me telling Benjamin to be quiet? Then you can play it over and over again until he falls asleep."

Andrew agreed it was worth a shot, so we quickly got ready to pull off our ruse.

The next time Benjamin started screaming, I stayed quiet while Andrew turned the volume up on his iPhone and hit play.

"Benjamin!" my stern voice came from the iPhone. "You be quiet or I'll have to shut the door."

Miraculously, Benjamin stopped screaming. The second stop screaming message probably should just be cut from the recording because it only served to confuse him (like, "What? I did stop screaming...").

"You don't want me to shut the door, do you?" recorded me said.

"No!" Benjamin cried from his room.

"Quiet down," I said, before my voice softened. "Good night, baby. I love you!"

It was like those tricky answering machine messages that make you think you're talking to a person but actually aren't.

"Hello?" the answering machine will say.

I was still a little nervous to leave Benjamin since I had an actual meeting on Friday night (right around bedtime again) and Benjamin screamed the entire time I was gone (it was brutal—Andrew's nerves were shot). I don't even know why Benjamin refuses to be put to bed by Andrew because it's not like he doesn't like him (see exhibit A, B, and C above). But I still wanted to go to book club because it's really quite a lot of fun, so when my ride came, I slipped through the door and ran off into the night.

I left the door open behind me, with the understanding that Andrew would close it after Benjamin had fallen asleep (as per our plan).

I texted Andrew when I arrived at book club to see how Benjamin was doing. Andrew said he'd had to use the recording a few times but that, so far, it seemed to be faking Benjamin out.


So you didn't close the door tight, right?

Miriam just ran to me in tears, shaking, saying that she saw something running and jumping in the hall.

I ran out to see a huge green blob on the bathroom floor—a full grown frog! We caught it and all is well.

It slipped in the crack at the front door (I guess). Good thing it decided to not go in Benjamin's room—he's asleep on the floor.

I guess Miriam had gotten up to use the bathroom and was in for a terrible surprise. She told me this morning that she thought it was a clump of hair at first (like a big ol' wad-from-a-hairbrush) until it jumped. Everyone at book club got a laugh from that.

When I got home I took some pictures of the frog. It took Andrew and both the girls working together to catch it (all three of them are rather afraid of frogs). It was sitting on the kitchen table in a Cool Whip container, with piece of a cereal box on top, with a book on top of that. 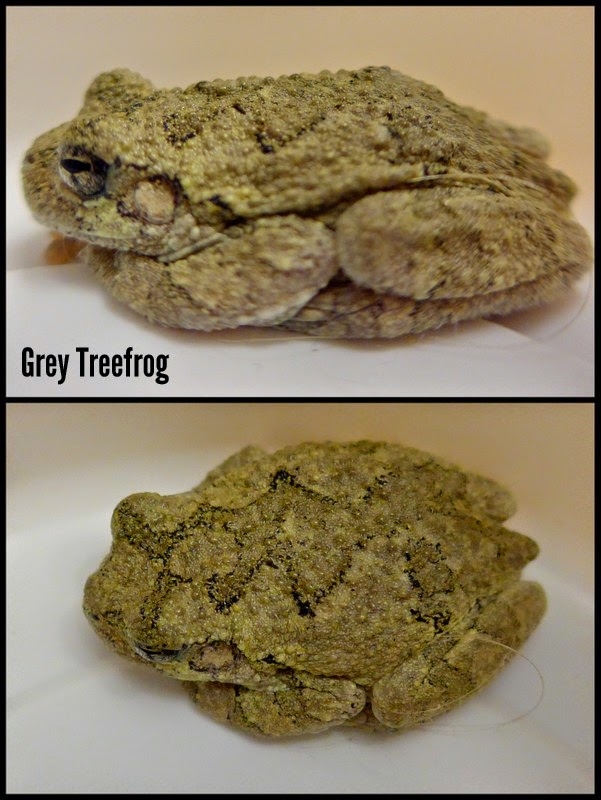 My phone was going off all over the place. I think we got two flash-flood warnings during book club and my phone's all set to do this big scary alarm (that I have no idea how to turn off) and my alerts kept coming a minute or so before anyone else's phones would alert them. I joked that I'm one minute more prepared than everyone else, which is why I was sitting on a stool during book club (to avoid the flash floods, obviously).

But seriously, we were on the lookout for flood waters while driving home. We saw more frogs than floods—frogs were hopping all over the place—though there was a lot of flooding, too. Our neighbour/home teacher down the street jokes that he has a 4-acre pond now. His whole yard is flooded.

Oh, and when I got home, Andrew said, "Ew. You have something black stuck in your teeth. It's big, too!"

So I check in the mirror and find a black bean skin stuck in my teeth! So either no one noticed or no one told me. Either way—oh, well. Too late to be embarrassed now.

But it's times like this when I look at Andrew and say, "Can you tell we live in the south?" I mean, a tick and a frog in the house on the same day?! Must be the south.

Oh, and Benjamin slept through the night in the first time in forever! It was fabulous, even though I woke up in a panic, wondering if he was still alive. He was, of course. Just sleeping.
Posted by Nancy at 4:04 PM