Dressed up in our Sunday best

A couple of Sundays ago we gathered the kids for church and they immediately began to squabble over seats and hymn books and were altogether so unpleasant that in the middle of the sacrament hymn I declared that church was being postponed for a half hour and that when we reconvened the children would all be dressed in their Sunday best and with their best Sunday attitudes in place.

So they all stormed away and I sat and fumed and when we regathered, the children were dressed up so nicely and had changed their attitudes so wonderfully that I couldn't stay mad, myself.

Years ago a friend of mine said that she might not always be able to control her children's behaviour but that she could always control their dress and if her kids looked cute she found she was a little more tolerant with them. There is wisdom in this but it's also something I've never quite managed. I haven't felt like I've ever had control of my children's outfits. I had dreams of a perfectly dressed baby, of course, but between reflux and explosive poops my babies never seemed to stay dressed in whatever they chose. So I kind of stopped choosing.

I'm not sure this particular friend's babies ever dared spit up on their clothes.

I literally have friends who didn't know what burp cloths were for. My friend Tiani, for example, was absolutely baffled when I offered her a burp cloth in the mother's lounge one day when she lifted her baby up to burp her. "What for?" she asked (it was her first Sunday at church after the birth of her first baby; I was on baby #3 (with a couple of colossal refluxers in the mix)).

"Sure," I said. "Like, just the milk that comes back up after they eat."

Her baby also pooped once a week, which was (is) unfathomable to me.

Anyway, I imagine my other friend (my advice-giving friend) had babies like this—babies that didn't make them lug around a bagful of burp cloths to clean up all their messes. Both types of babies are fine; but I think they make different kinds of mothers. One type makes mothers who expect they'll be able to dress their children well. The other type make mothers that have to stifle laughter at the very idea.

I haven't seen this friend or her children for years, but I can't imagine that she's ever had a child wallow in a mud puddle fully clothed *cough* Benjamin *cough* and I imagine that her children definitely get dressed every day while I struggle to get mine out of their pyjamas. But that's alright. There is still wisdom in her words and I found it on Sunday when I had the kids go get changed.

Don't they clean up well? 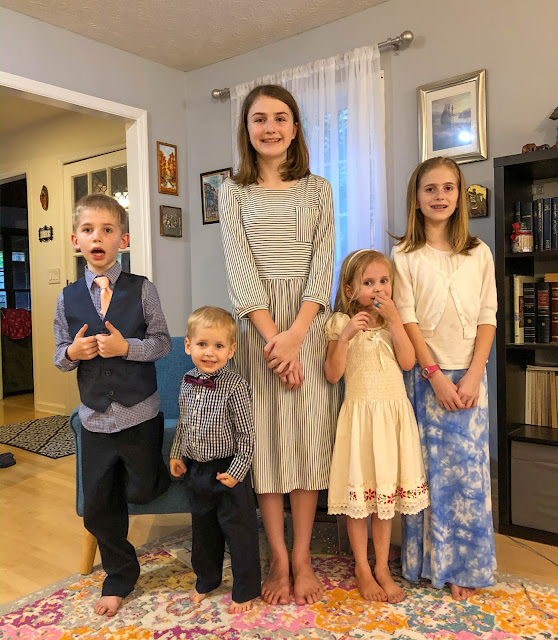 It was rather hard for me to catch one of them all in a normal position ,with a happy expression, with no hands in covering their faces... 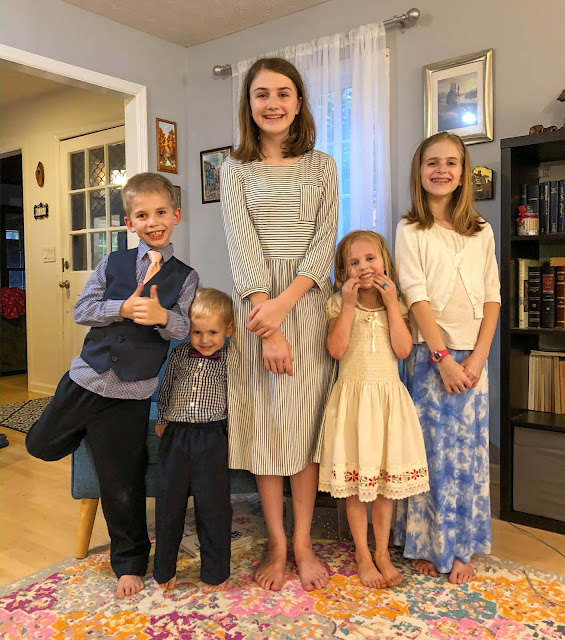 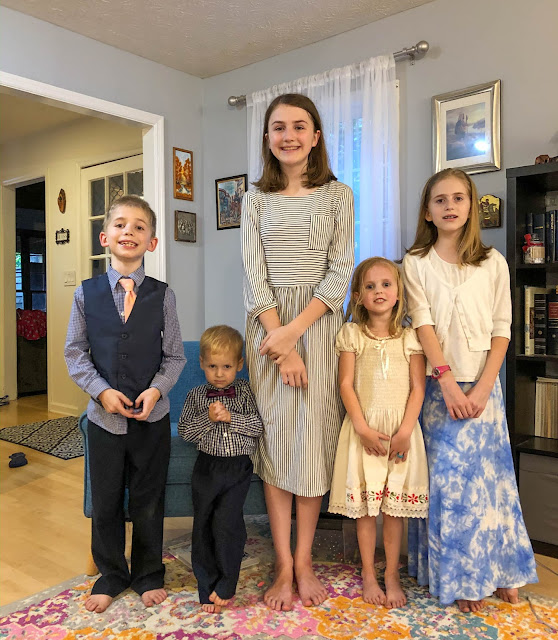 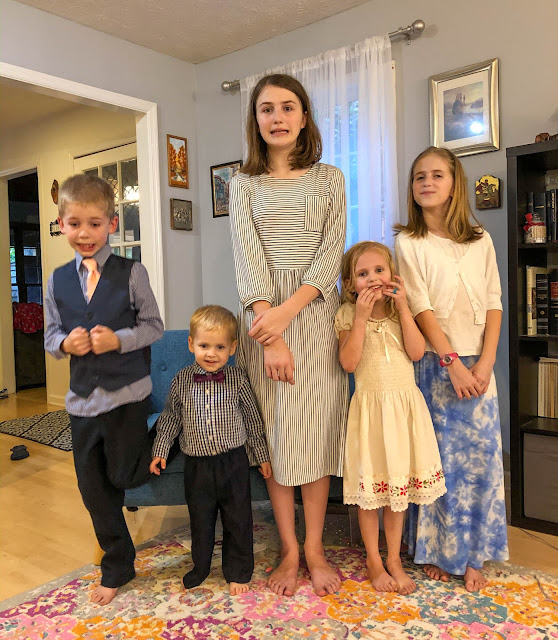 So finally I told them to do a funny pose, which is what they'd wanted to do all along, and then we had a lovely church service together and the kids were sweet and kind to each other, which was nice. 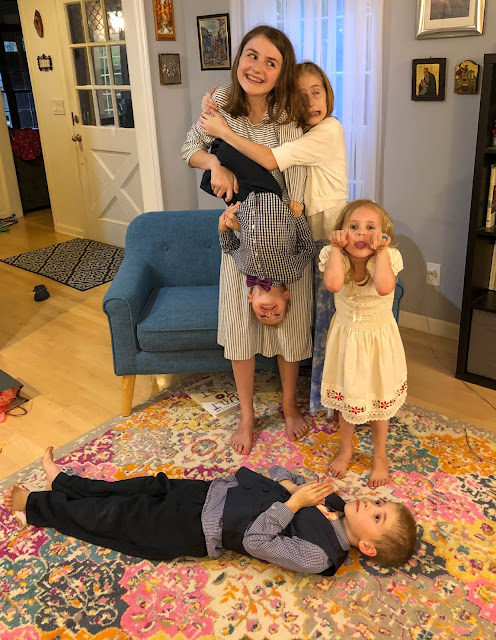 It was also nice to dust off our church clothes, I guess. We put Sunday clothes on for Benjamin's baptism (June 6) but before that we haven't all dressed up since March. I almost thought about getting Benjamin a cute little suit for his baptism since we got a sweet little dress for Rachel (and then Miriam) to wear, but I talked myself out of that because (a) Benjamin would just ruin it because he's very rough on clothes and (b) by the time he might actually get to wear it in public it would probably be too small for him, anyway.
We'll settle for getting a back-to-church outfit for him whenever we find ourselves in the position of actually getting back to church (which...boy...I dunno (4000+ cases again today, just here in Georgia, so...)).
Posted by Nancy at 12:26 AM