It probably comes as no surprise that we went to the pool today. And yesterday. And the day before. It's kind of what we do now, I guess. Even when it's pouring rain the kids beg to go to the pool (and it wasn't thundering and so we went). Here's Benjamin, first one in the pool as always: 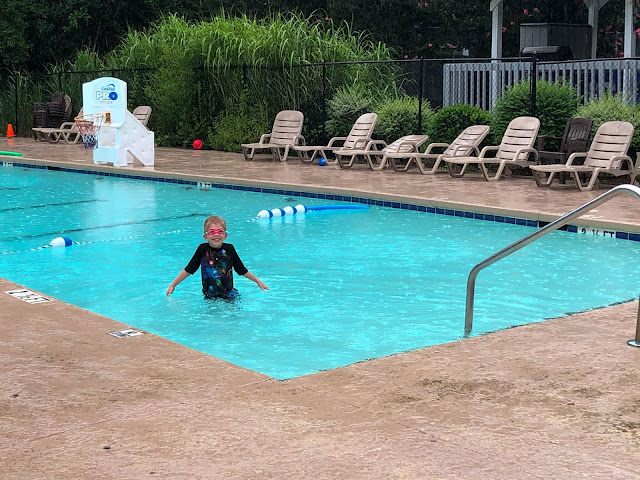 Here's Alexander enjoying a little shower from the rain spout: 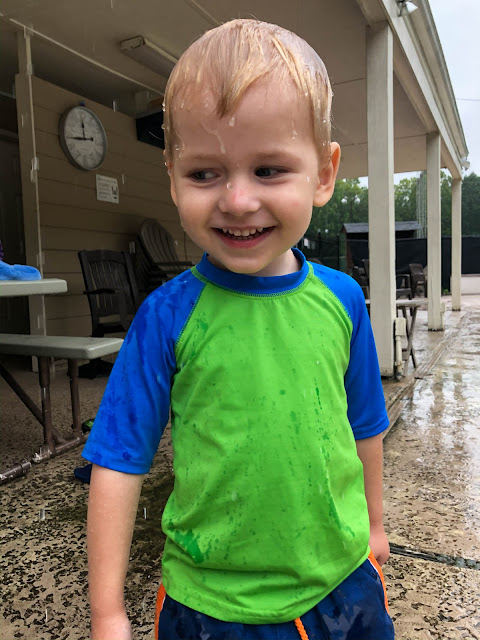 And here's Zoë doing her best starfish float, holding her breath against the raindrops: 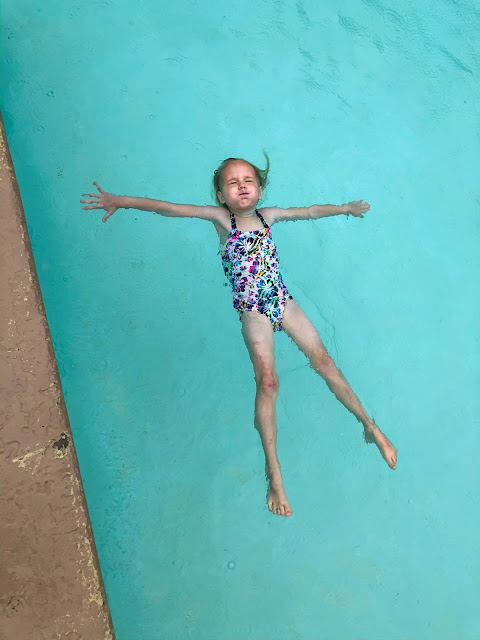 She's really pretty great at floating now and can hold it for as long as she wants. Her swimming is still a little questionable but her floating is great!
Today was a beautiful day and we arrived at the pool at the same time as another family—a mom with three sons. Before we got out of the car I prepped the kids about remembering to maintain our distance (another little boy showed up at the pool yesterday and Zoë and Alexander were very curious about him, which under ordinary circumstances would be perfectly fine but...these aren't ordinary circumstances) and then we went to the pool and Zoë immediately waltzed up (but remembering to keep the 6 foot rule) to the other mom and started talking to her.
"My name is Zoë and I'm five and we came from Spanish Fork!"
And Alexander stumbled along beside her. "My name i' A'ex'ander and I'm two and we tame from 'Pan'ih Fort!"
"I'm...I'm sorry," said the mom. "Did you say Spanish Fork?"
"Yup!" chirped Zoë. "We came from Spanish Fork but we live here now!"
"We live here now!" Alexander echoed.
It was about at that moment that I read the other mom's hat, which was emblazoned with "Eagle Mountain, UT." So we chatted for a bit while our big kids took turns going off the diving board and our little ones splashed on opposite sides of the steps. It was nice to actually talk with someone face-to-face, I have to admit, but I really think social distancing was only possible because we didn't know each other. In my head when I, say, invite some of our friends here to go to the pool with us, I just see the kids being immediately chummy with each other, not remotely shy, you know? So social distancing would go out the window pretty quickly... And we just...aren't ready for that kind of chumminess yet, unfortunately.
Anyway, we've found a few other friends the past couple of days. Yesterday we were doing some drills when I noticed a little frog swimming alongside us—an Eastern Narrowmouth Toad (I'm pretty sure)—so Miriam scooped it up out of the water: 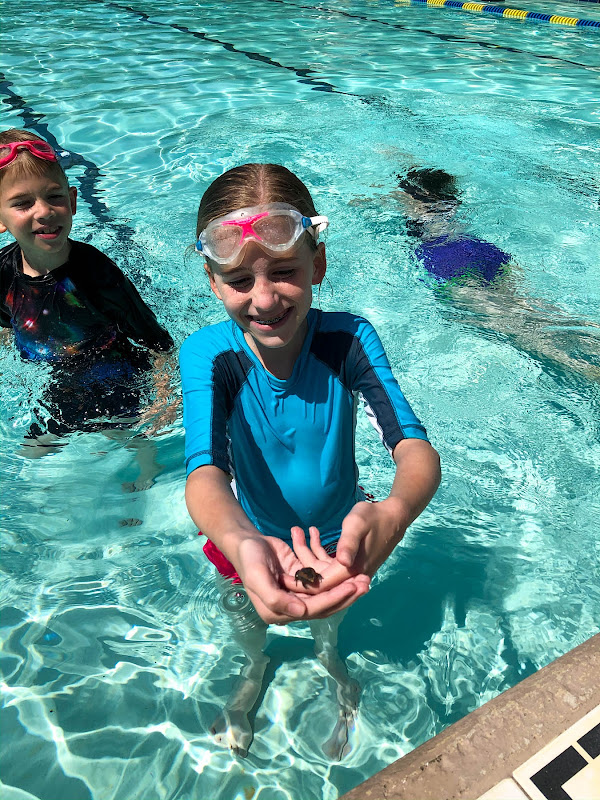 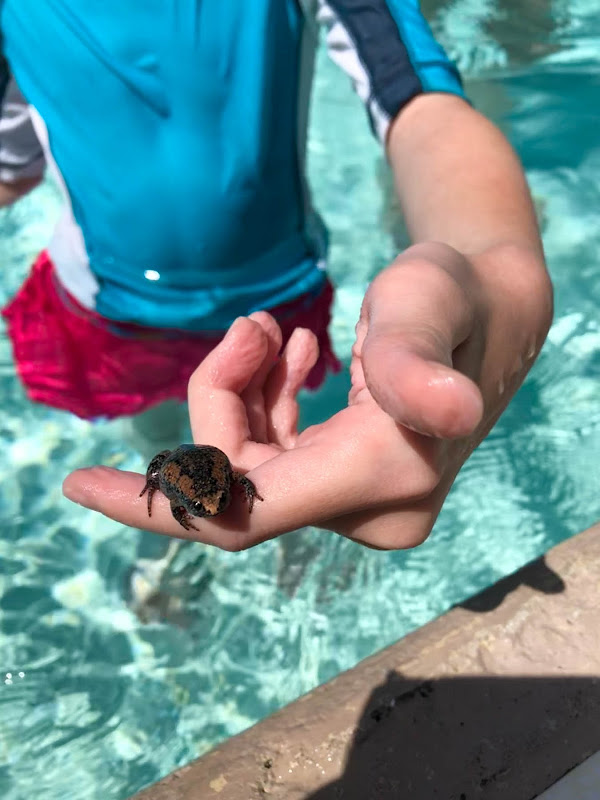 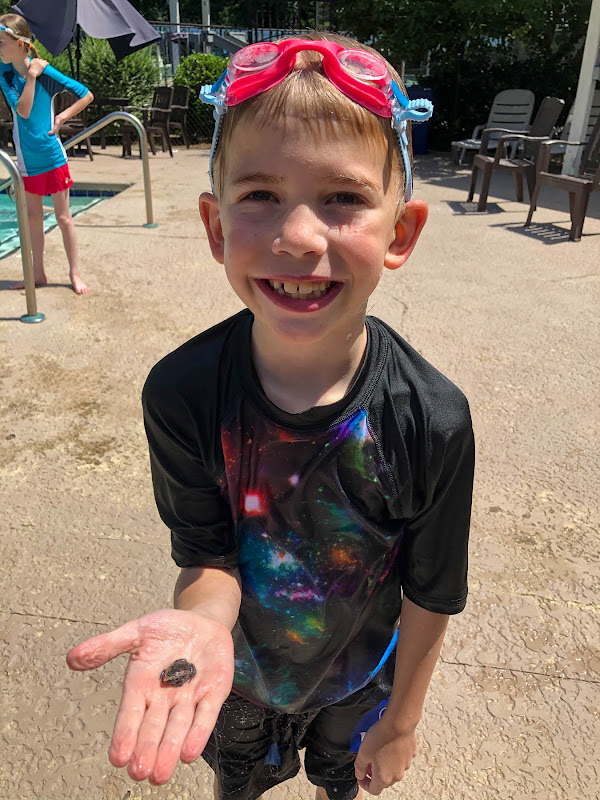 Today we found a (dead) Prince Baskettail, which Zoë decided will make a very nice pet (for as long as everyone else will let her keep it around (for the record: I'm pro collecting dead bugs so if it disappears it won't have been me who tossed it)). Its eyes are quite stunning, and are probably what earned them the nicknames of "emeralds" and "green-eyed skimmers": 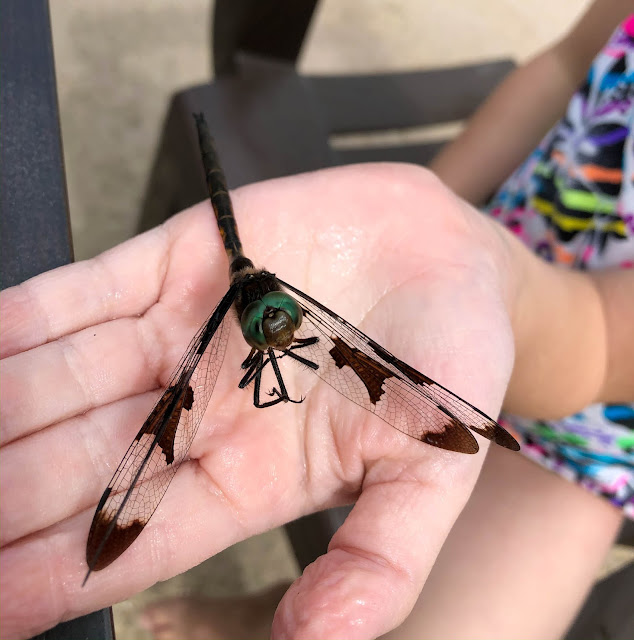 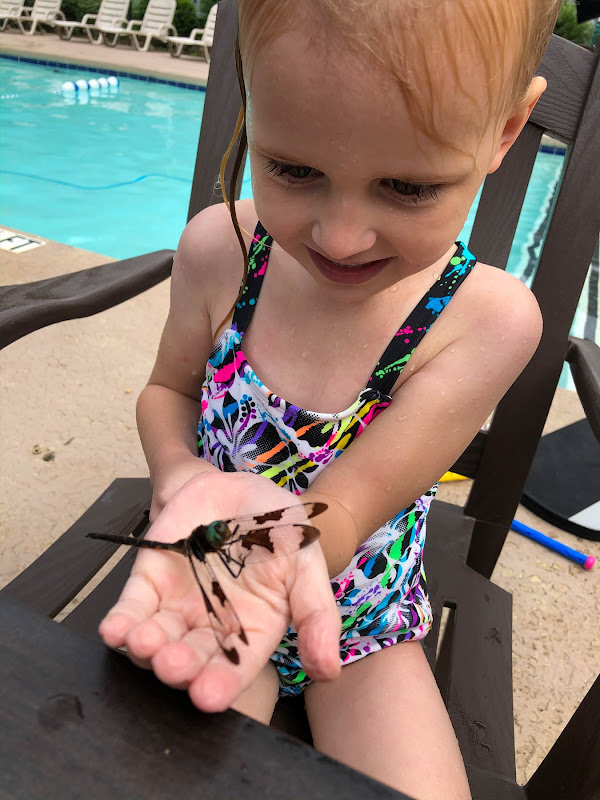 Alexander and Zoë both got rather brave in the pool today. Zoë insisted on learning how to dive in the deep end, even though she's really not great at swimming yet. She really did a pretty good job!
Here's Alexander hopping around the shallow end (his first day without his floaty):
Yesterday he couldn't wait to leave the pool (even though it was a beautiful day). Today I could hardly get him to leave the pool for anything. He was having the time of his life. He was making up games left and right. As he hopped back and forth from the stairs to me and back again, he would say "Hop! Hop! Hop!" but he also was turning everything into cat games so he started trying to say, "Hop! Meow! Hop! Meow!" until he finally got all tripped up (on his tongue, not his feet, thank goodness) and said, "Hop! Meow! Hop! Mop!"
He wanted to play catch with the pool basketballs but also wanted to involve cats, so he called the game "Meow Ball" and each time we threw or caught the ball we had to say, "Meow!"
It is now one of his favourite pool games and he asked to play it several times before we finally convinced him to leave the pool.
He's all about inventing games lately and asking me if I will play with him. The other day we had a Shutterfly book arrive in its lovely orange box, which Alexander co-opted and fashioned into a game board. He brought it to me and said, "Do you want to play this game with me? I made it up!" 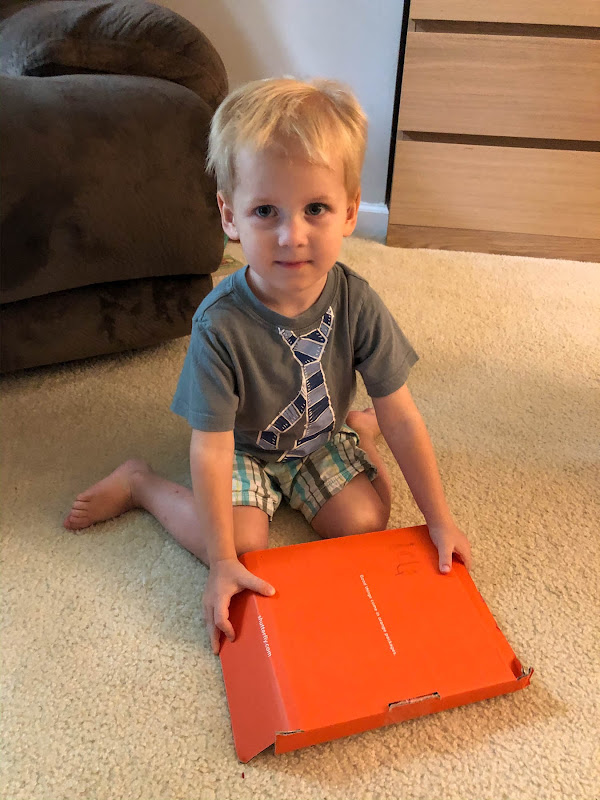 He opened the box and started explaining the game to me. 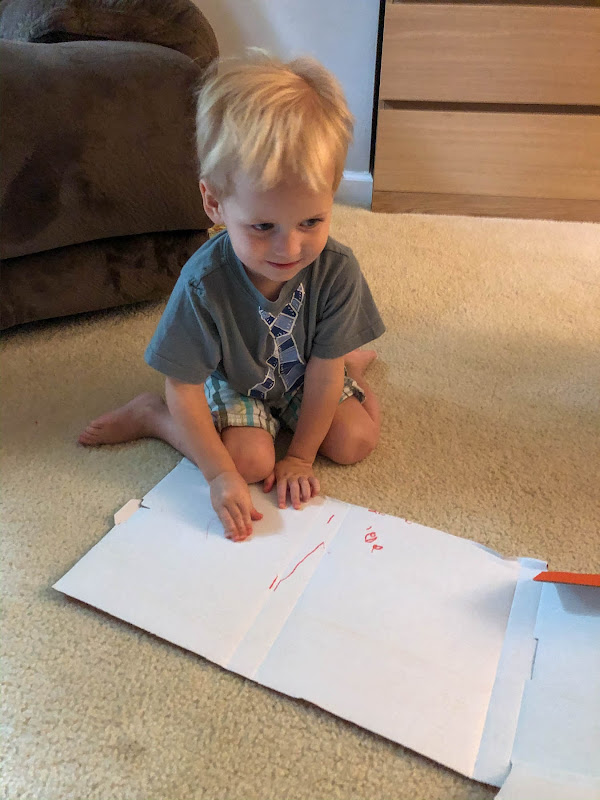 There were two (invisible) dice that we rolled (I could never find them; Alexander always could) and then after we read the numbers (Alexander usually got 8; I usually got 3), we had to pick an invisible card from the invisible stack and complete the action on the card (I usually read them wrong but Alexander always knew what they said). It was not the easiest game for me to play but Alexander had a fun time and knew exactly what was going on the whole time.
Here he is with his wild post-swimming hair (it stayed that fluffy all day): 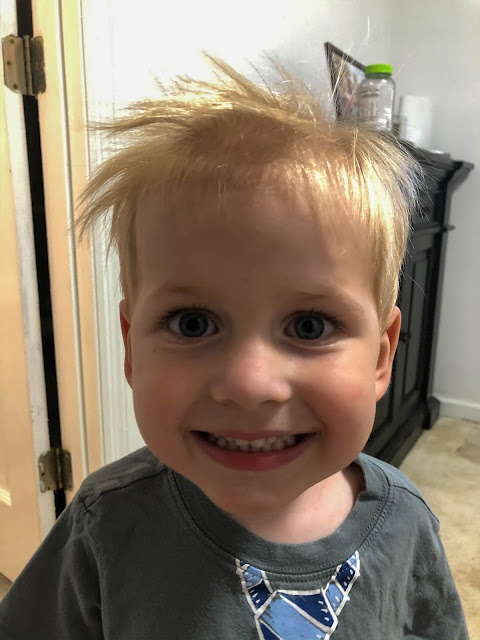