It's me again, back for another coronavirus rant because conversations on Facebook are impossible.

A relative of mine who lives in Alberta posted a chart that had compiled information from an Alberta government website on COVID-19 statistics. The statistics are accurate as of August 11. 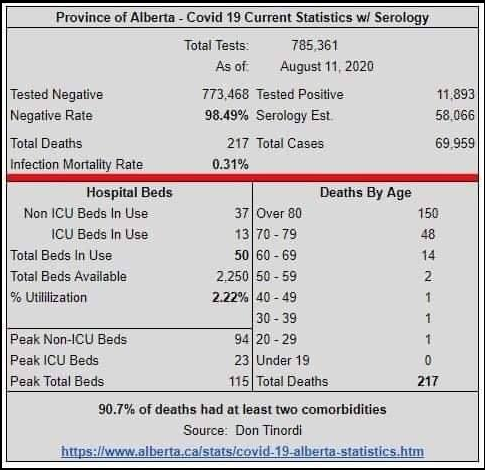 The relative posted this picture alone with the caption, "Interesting."

I took the opportunity to praise what has really been a decent handling of the pandemic (and Albertans by and large seem to agree that they were guided through this pandemic well; their government allowed experts to do their jobs (largely without politicizing the pandemic) and presented a unified front to their citizens and, honestly, things were handled quite well).

I said: "Watching Alberta’s response to this virus has been amazing from my seat down in Georgia. They’ve done an amazing job and it’s been wonderful to see people willing to make sacrifices to keep others safe. The United States has really bungled their response.

"My mom had a friend die; my friend’s husband is on his deathbed; everyone wants to just “get back to normal” without having done the work to get numbers down to manageable (traceable) levels.

"It’s wonderful the virus has been so controlled in Alberta. It’s definitely something to be taken seriously (hospitals in my county are at capacity, for example). So glad your community didn’t suffer like that!"

A different relative hopped on to explain that: "the difference is US hospitals are paid thousands of dollars per Covid patients. Here they don’t get paid extra for Covid patients. People are doing exactly the same things here as down there. It’s all about money and politics."

So while I know that is true that COVID can be costly to treat, I asked for a source for her information. Because while I believe hospitals may "receive" thousands of dollars more for a COVID patient (on a ventilator), I don't believe that hospitals are necessarily making bank on this.

Weirdly, this relative also pointed out that checking into the hospital for COVID in Canada would cost $0 while in the US it would cost, and I quote, "$$$$$!"

Now, I completely agree that the medical system in the United States is problematic. I have ranted about this before. My uncle rightly pointed out that the Canadian system isn't perfect either. Both systems are funneling wealth into someone's pocket (though the US system, I would argue, is doing so at a much more alarming rate). He also mentioned Mauritius where public hospitals are available but anyone who can afford to opts to go to a private hospital (and I hear that; the same was true for Egypt where we opted to birth Miriam in a private, not state-run, hospital...but, as in Mauritius, the costs were very transparent and fair). However, I think that while severe cases of COVID are more expensive to treat in the United States they are also more expensive to treat in Canada or anywhere else in the world. The reason for this is simple: severe cases of anything are always more expensive than less severe cases.

And, no, I don't believe that doctors are trying to label patients as COVID just to get extra money (because that money only comes if the patient is placed on a ventilator and I don't think doctors are pushing ventilator use). Here's why:

I had a few (2.5) babies with the help of Medicaid. Because birthing babies is ridiculously expensive in the United States and it's really hard (thousands of dollars hard) to do it without insurance when you also make no money. The real kicker is that in the United States if you're making enough money to afford to save up to have a baby...you probably also get pretty snazzy insurance through your employer...but that's another rant for another time.

Benjamin was my first baby on Medicaid and thank goodness for that because he's our million dollar baby! Because he had to be in the NICU, the hospital "got" a lot more money from Medicaid than they would have if his birth had been less...eventful.

Any way you add it up, NICU babies cost more than non-NICU babies.

But that's because non-NICU babies don't require intensive care, while NICU babies do. NICU babies can't remember to eat and breathe and beat their heart at the same time. They require CPAP and nasal cannulas and NG tubes and IVs and incubators and bilirubin lights and medication and round-the-clock care. Regular babies...simply don't require as much care.

So their hospital stays are shorter and less expensive (daily) than a NICU baby's stay would be. I think it's understandable that more care would lead to more expense. In the United States we often see that cost coming through; in Canada people are often (but sadly not always) unaware of what it truly costs to have a baby (this source says parents can expect to pay anywhere between $0 and $1000 to give birth (vaginally) in Canada, which is hilarious because I think our lowest copayment was around $2000 in the US).

Anyway, my point is that increased care comes with increased costs. COVID patients in the United States with COVID who need intensive care will therefore be billed higher (or "receive" more from the government if they are on Medicaid). This is not a conspiracy. This is just...the way...things work. Because you have to pay for increased care. Canadians are also charged more for intensive care; it just isn't felt individually because it comes through taxes (and, frankly, I think that's a much friendlier/sensible system, but you probably already knew that about me).

If I were to buy a minivan and no bells or whistles (we're talking roller windows (do they even have those anymore?) and a regular ordinary rearview mirror for backing up and doors that you have to shut manually), should I expect to pay more or less than I would pay for a minivan with a back-up camera and doors that close with the click of a button and seat warmers and a DVD player and windows that roll up and down with a button and a built-in vacuum and...and...and...and...

I mean, either way I get a van, right? But we wouldn't be surprised that one van costs more than the other. Because one has more gizmos.

One person said, "We’re told enough conflicting information it’s hard to know what is legitimate and what isn’t," which is true. But it's only hard, not impossible. We can reason through this!

And a relative agreed that we can't even know anymore, saying, "But who know anymore. Truth is flighting these days. Everyone is willing to die for their beliefs to the point of cruelty to others who’s experiences differ from theirs" [sic].

I don't see where or how I was being cruel, but perhaps she wasn't referring to me after all, but just to society in general (which I would have to agree with her on).

Another person in this long thread said that of course there were more cases in Georgia! There are "less people in all of Alberta than a small corner of Georgia. It’s the logistics that slowed the virus!"

Heaven forbid I praise the conservative government currently running the place (I was fine with Rachel Notley, personally, but liberals are out and conservatives back in; and that's fine (and, in fact, Canadian conservatives are pretty liberal—note how my conservative relative was so proud that COVID treatment would cost $0 out of pocket in Canada? I'd like to see that fly on a conservative ticket in the States!)).

I know sometimes it feels to other people like I have to be right, but I'm honestly perfectly happy to be wrong if you are willing to teach me. Show me that I am wrong. That's all I ask. Prove your point. Give me something to chew on.

If I say 2+2 is 4 and I can show you this several different ways (counting on my fingers, using a calculator, taking a poll to see what the general consensus is, etc), and you want to convince me that 2+2 is really 5...great. Go for it. But don't just tell me that it's five and that I'm hurting your feelings if I ask you to back up your statement. Convince me. I've been convinced before.

I used to think that eating broccoli would make my babies gassy (I've used this example before, I know). But then a friend explained to me that—duh—babies aren't getting broccoli through breastmilk. The broccoli is fully digested by the mother, and then specific chemical compounds are absorbed through the blood stream and delivered to the mammary glands that magically turn it into milk...without any broccoli in it. Babies are gassy because babies are gassy. Not because of broccoli or eggs or...whatever. I mean, sometimes allergies happen. But by and large your baby is just a gassy because they're a baby. And I was like, "Oh, thank you. This knowledge makes my life easier and better and more full of truth than it was before. Bless you for opening my eyes!"

Being right isn't what I want. Knowing what the truth is...is.

So if I'm challenging your truth, I hope I can back up my claims. And if you're challenging my truth, then back up your claims. And if I compliment your community/province/country for doing a good job...maybe don't attack me for it? Because that's just strange.

Prove me wrong (but, like, actually prove me wrong—don't just say "it's so hard to know" and accuse people of being rude and "cruel" for asking for actual evidence).