The children have been begging for a pet for quite some time but it's never really been an option before since we've never quite been in a place of our own. Ever since the pandemic began we started looking into pets a little more seriously. The only problem is Andrew and I haven't ever gotten a pet before. We both grew up with cats, but we've been pet-free ever since we got married/left home. Getting a pet seemed like an awfully big thing to do.

I mean, we have five kids. Taking care of yet another living, breathing creature seemed like a lot.

So in the end I convinced the kids we should get some Madagascar hissing cockroaches (which, incidentally, I still think would make an interesting pet) but we'd have to wait until the fall to order them because it's too hot to mail them right now.

But then a friend of mine posted about a kitten in need of a home. My friend's manager had hopped in her car to go somewhere and she started hearing a whining noise in the engine so she pulled into a gas station, popped her hood, and found a kitten! She knew she wouldn't be able to keep her so my friend (who just loves animals, but has too many cats herself at the moment) started asking around to find a home for her. She even said she'd have her rescue group spade and vaccinate her in the next few weeks!

I asked Andrew about it and he was immediately on board (like even more excited about it than I was (because I think I've been more nervous about it than excited)) so we claimed the kitten and the next thing we knew it was Sunday morning and the kids were colouring at the table together after "home church" when the doorbell rang.

Zoë was very excited to see who it was because this friend was her Sunbeams teacher last year (and so Zoë still thinks she's her teacher this year since no one really remembers who their teachers are this year, do they?). We opened the door and our friend put down the carrier and said that she had a little friend who needed a loving home and was hoping that the kids might be willing to take her in. 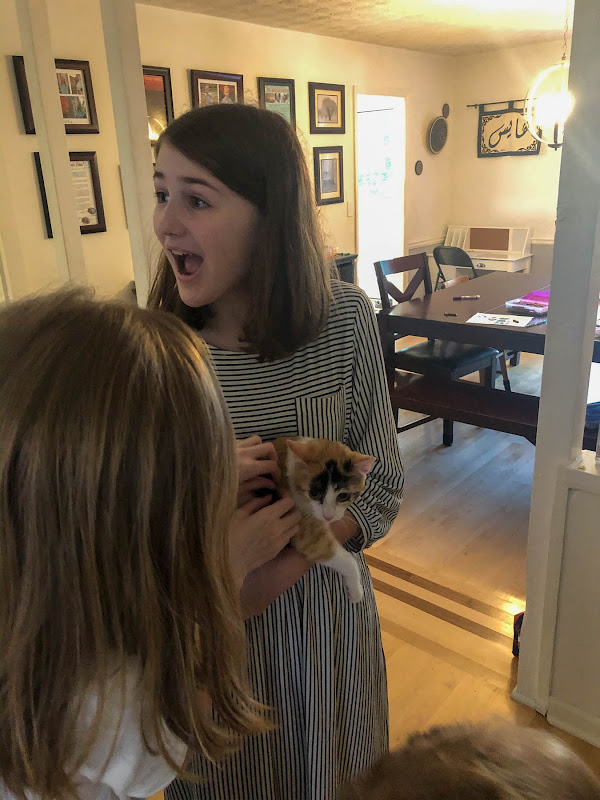 She came with the name Ellie, but the kids were excited to get to name her, so we made a list of names to pick from and voted on which ones we liked to narrow down our list and then voted again to make it official.
Because the cat's name was already Ellie, we thought we could perhaps call the cat Eleven (from Stranger Things). One of Zoë's favourite names is Ella, so that was another contender. Belle, Anna Beth, Diana, and Karla Meow-rx also made the list. Penny, Buttercup, Katniss, Pepper, Prim, Nymphadora, Sunshine, Daisy, Zelda, Panini, Neko (Japanese for 'cat'), BOWwow (for Black/Orange/White), Neko...and Peggy!
We had so many names on the list, but Waffles was the only one to get a nearly unanimous vote.
Zoë was against it because (a) she really likes the name Elle/Ella/Ellie and (b) she was worried that one day Andrew might ask what we want for dinner and someone would say "WAFFLES!" and he would get confused and end up cooking Waffles the cat instead of waffles the food and that would be horrible.
We assured her that we would not be very likely to make a mistake of that calibre and that she is still free to call the cat Ella/Elle/Ellie if she wants to. So the cat's name is technically Waffelles, which Zoë has started to use (with a very strong emphasis on the -elle).
Rachel says she looks like waffles covered in maple syrup and topped with whipped cream. She's a rather intriguing calico, about 4 months old. One side has a lot of black. 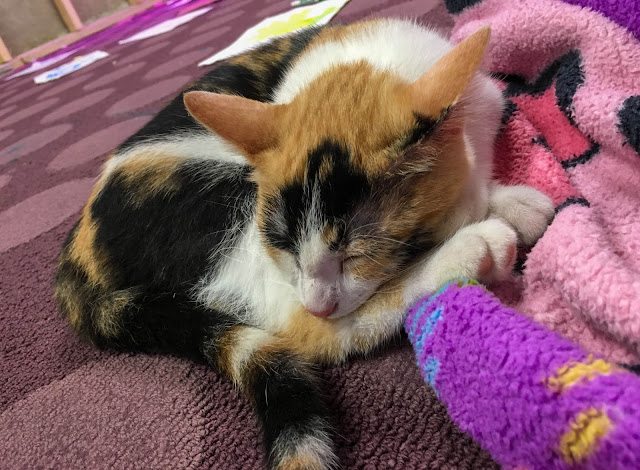 The other side is mostly orange. 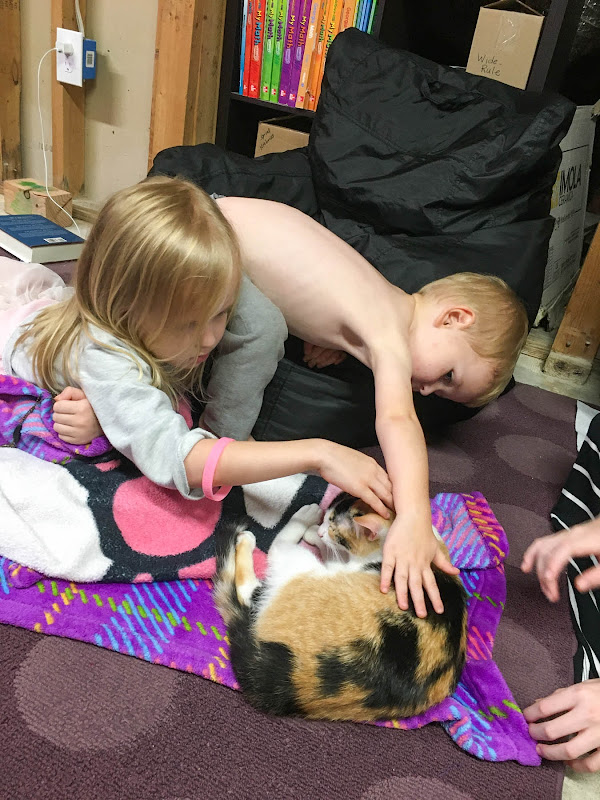 When Andrew and I were talking about her and floating names (that didn't get picked, of course), I mentioned that she was calico and Andrew had to ask me what that was, so I told him all about how calico cats are a black/orange/white mix, that they are usually females because the contrasting colours of black and orange are carried on each of the x-chromosomes. Males can be calico if they carry an extra x-chromosome (XXY) but it's rather rare. And...
"How do you know all of this?" he asked.
"How do you not know all of this?" I asked.
Someone didn't check out every single book about cats in the library and sequentially devour them and....it shows. I was so obsessed with cats when I was younger and I was sure I was going to be a veterinarian when I grew up (which obviously didn't happen and, honestly, it's probably for the best).
I also taught Andrew what tabbies are. Who knew there were people who didn't know what tabbies were? Especially when Dukie—Andrew's childhood cat—was a tabby.
Anyway, I haven't had a cat or been around animals very much for the past 15 years or so, so regardless of my excellent (and useless) knowledge of cat coats, Andrew was much more decisive and confident with this whole pet-getting process.
I thought Waffelles was a beautiful mix of my childhood cats: Midnight (who was black), Tango (who was an orange tabby), and Winter/Simba/Lakhi (who were white). There were also Gibson & Fender (both grey) and Simon (also grey), but they didn't quite make it into this sweet kitty. 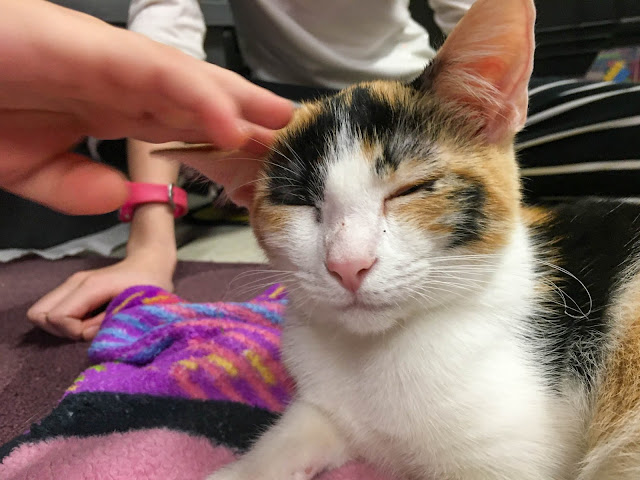 Here you can see her whiskers are a little melty at the ends. I kept thinking they were dusty (because she has been exploring our many cobwebby basement passages) but when I was cleaning her off I realized they were melted. Poor thing.
She's going to get plenty of love to make up for her rough start, though. 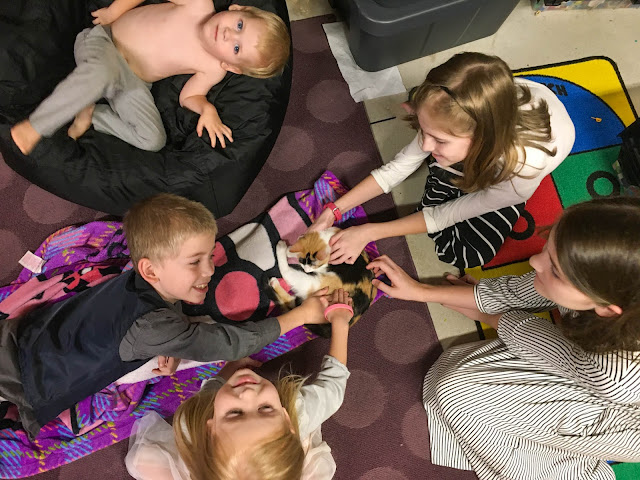 Zoë and Alexander are at once excited about having a cat and so giggly-afraid of her that they make her rather skittish. The older three are a little better with her. Benjamin whispered, as he was sitting on the stairs comforting her (she's a little afraid of the stairs, but I'm sure she'll get over that soon), "I think this is changing me..." 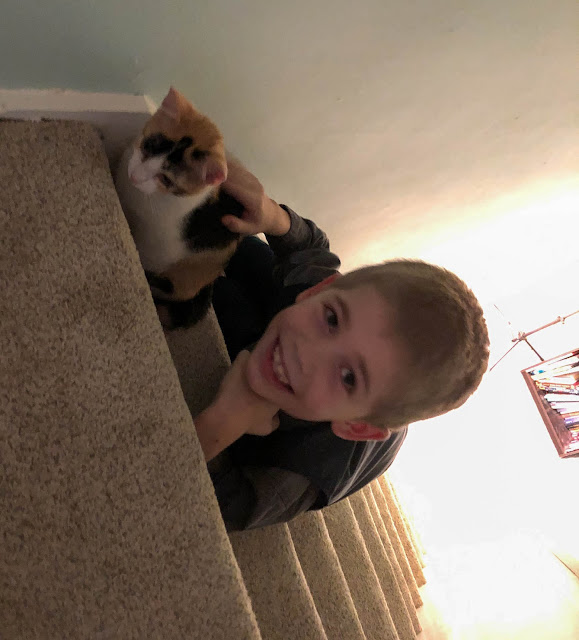 As gentle as he can be with her, Benjamin has done his fair share of getting her riled up, leaping around, turning flips in the air, chasing balls across the floor, and so forth. It will be interesting to see what kind of changes Waffelles will bring to our home.
Posted by Nancy at 12:06 AM