Tonight Alexander cried before bed because I told him that we couldn't go out for a firefly sunset. To his credit the sunset was fairly beautiful, so I relented and we went outside to watch the sunset and the last few fireflies. We did not see many fireflies, however, because firefly season is winding down (they aren't active for very long), so he ended up crying again. Poor thing.
Zoë wrote out the numbers 1 to 100 for me. Half of the numbers are backwards, but that's okay. She also got a parcel in the mail, which Daddy opened before he realized it had her name on it. Inside was a sticker activity book from Grandpa. He told her that he and she could be in their own sticker club together. When I was tucking her in tonight she giggled and said, "I can't believe Grandpa is being nice to me! Usually he just tickles me, so this is a nice change!" 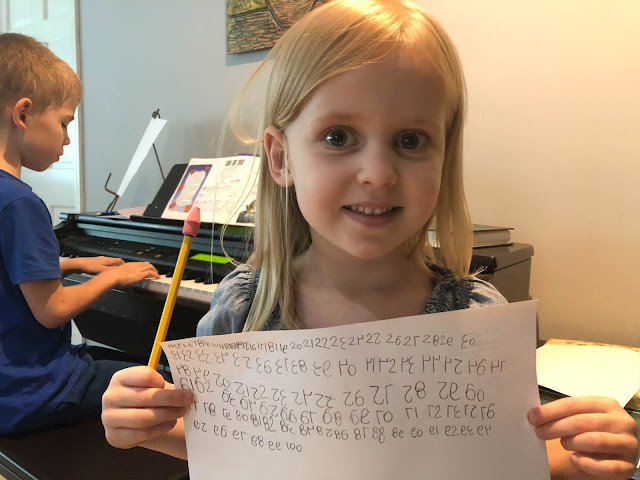 At dinner a few evenings ago we were discussing the movie Lagaan, and Zoë said that even though those soldier-men in India weren't being nice to the people, Queen Victoria was surely being nice to the people and didn't want to tax them unfairly. And I said something about, how Queen Victoria was well aware of the "plunder and catastrophe" the British were conducting in India and knew it was helping make Great Britain rather wealthy so she was pretty much on board with colonization...
"What?!" Zoë said, in shock, dropping her chin to her chest.
Her face landed right in her plate and she popped back up from her plate with koshary plastered all over her face. She was quite surprised but was able to laugh about it along with the rest of us.
Benjamin had a pretty great week overall. He's been trying to do his math work as independently as possible and has been trying to make good choices in general. He doesn't always succeed (he dug a hole in the front yard this afternoon—in the middle of the lawn, for example, when the rule is that he is only allowed to dig holes in the backyard—where we have no lawn. But it has been fairly obvious that he's been trying to be good.
Here he is playing from Hayden's Symphony No. 94 (watch to the end for his face):
<iframe width="560" height="315" src="https://www.youtube.com/embed/Hiwbiz3oMvg" frameborder="0" allow="accelerometer; autoplay; encrypted-media; gyroscope; picture-in-picture" allowfullscreen></iframe>
While the little kids were out digging holes in the front lawn (obviously we don't have many rules at our house...could they at least follow that one?!), Andrew and I settled in for a game of Scrabble with Miriam and Rachel. Miriam was particularly proud of the word JARRING.
ROBES was our first word, EXCITED came off to the right, CALMS to the left. Then the words JEWEL, and GIN (which I changed to VIRGIN on my turn). Andrew put an A between JEWEL and ROBES to make JAR and Miriam then quickly filled in the remaining letters for JARRING and scored a whole lot of points. I was most proud of my word DISHONESTLY, which took two turns to make (HONESTLY on the first turn, using seven letters, and DIS added later) as well as my placement of FLOW, which scored me a billion points, though I'm now realizing that WA, which we all accepted as a word isn't actually a word. Andrew and I were both fairly sure it was. But I've since looked it up and it's not (how embarrassing; sorry everybody).
WAW is a word. AW is a word. WO and WE are words. But not WA. 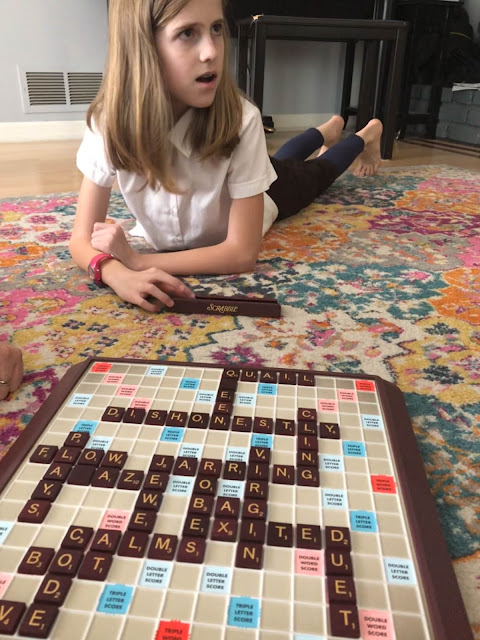 So perhaps my 11-letter word is really how I came by my win (though, like, honestly, I probably would have won without that play anyway). We then played another round of Zilch and Miriam won!
Rachel got a text reminding her of the YW pool party this week. She texted back and asked how they were possibly going to social distance at a pool party. Her leader texted back saying that she wasn't sure but that XXXX and YYYY are medical professionals and they okayed the activity so if Rachel's not comfortable coming she doesn't have to. I thought that was a rather terse response; if they could have explained exactly how they were planning on having the youth maintain their social distance we might consider allowing Rachel to attend an activity. However, no one is ever able to explain how they will social distance just that it is a "socially distanced" activity and we should only come if we're comfortable and if we're not comfortable then we just miss out.
Frankly, we're fine on missing out. Especially if you can't tell me how you're going to be social distancing. At a pool party.
So, no common food table, I assume. And everyone six feet apart? How? The pool isn't that large!
The CDC suggests that swimming itself isn't going to spread the virus. There's no evidence that the virus can survive for a long time in water...and yet they also suggest "ensuring staff, patrons, and swimmers stay at least 6 feet apart from those they don’t live with, both in and out of the water" and "discouraging the sharing of items such as food, equipment, toys, and supplies with those they don’t live with." Will those things be happening?
I think asking how social distancing is being fostered at any particular is not only a fair question to ask, but a wise one. Unfortunately, whenever we ask this question we're always given a line-of-authority answer...which I don't exactly appreciate. But, I to be fair, they evidently don't really appreciate being asked how they're going to be socially distancing, either. So I guess we're tit for tat in that department.
So Rachel's missing out on the pool party. But she's also missing out on, you know, perpetuating the spread of a deadly disease. I'm okay with that...and she seems to be okay with that, too. At a gathering of 25 people there is a 65% chance "that at least 1 COVID-19 positive individual will be present at a given event" (and you know they're not wearing masks in the pool).
We are filling our days just fine. Over-filling them, even. We had church today, practiced instruments, played games, watched Princess Bride, ate a yummy home-cooked meal (courtesy of Andrew), took a family walk, took a firefly walk, read stories, dug holes, drew with chalk, napped, chatted to our grandparents on video calls, made a propeller airplane out of recycled materials, did some chores to help clean up from dinner, had piano lessons, played with magnet stick-and-ball toys, did some Marco Polos with some friends in the ward and cousins from far away...
I, too, wish the pandemic wasn't a thing. But, alas, it is.
And we are totally and completely mismanaging things.
Normal is out of the question.
It's very disheartening for me to see. It hurts my heart to think that the US/Canada border is closed (and that it will likely remain closed for quite some time because things are so dangerous here (literally dangerous, guys)). This Vanity Fair article was mind-boggling (I know Vanity Fair leans left but they tend to be an accurate news source regardless).
Posted by Nancy at 11:47 PM