It was a little cooler on Friday, so we ended up spending only 1.5 hours at the pool instead of the two the children feel I promised when I joked that if we spent two hours at the pool a day from now until it closes at the end of September we very well may get our money's worth out of the pool pass we bought (and, as an added bonus, enter fall feeling like we had some adventures this summer).

Here are my freezing babies: 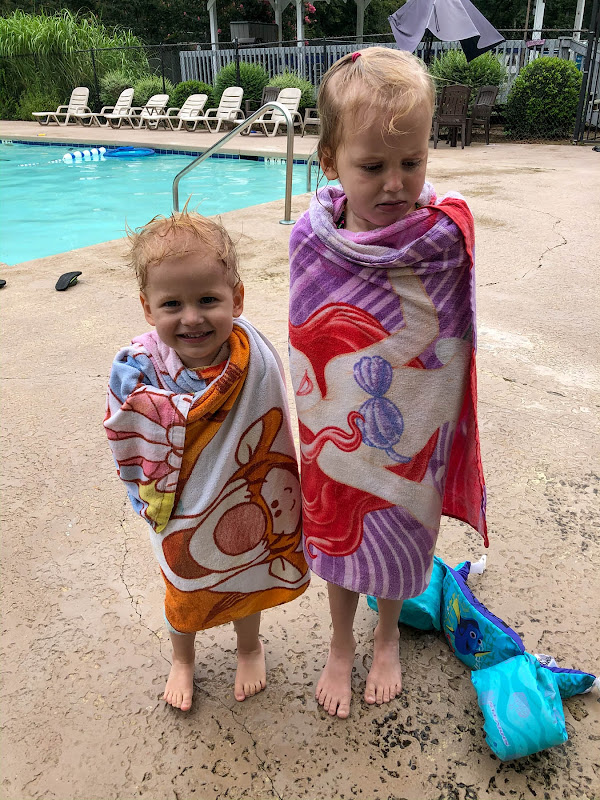 It was about 75°F (23°F) and they were shivering and, depending on the child, miserable (you can guess which one was miserable). I told the kids that this weather was fine swimming weather! I grew up swimming in an outdoor pool where average summer temperature is only 76°F (and, actually, I checked Weather Underground's history and in PoCo, BC at 11:35 AM it was only 63°F (17°C) and I'll bet there were still people swimming outside).
The older kids were still happy to be swimming. Here's Benjamin: 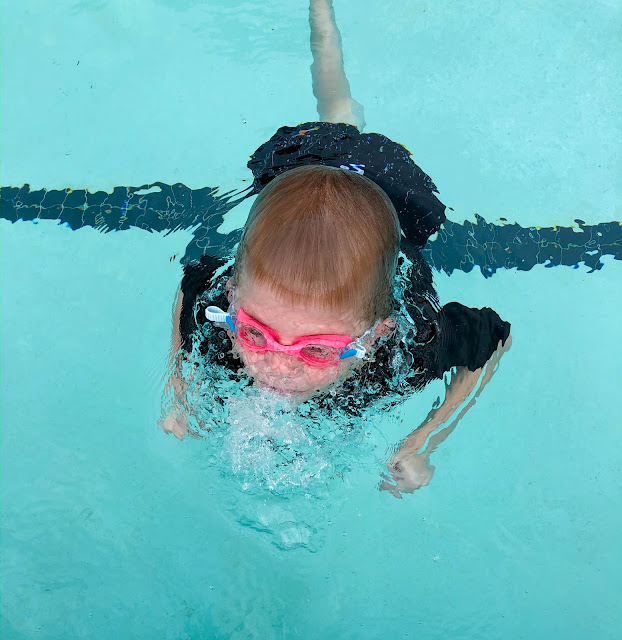 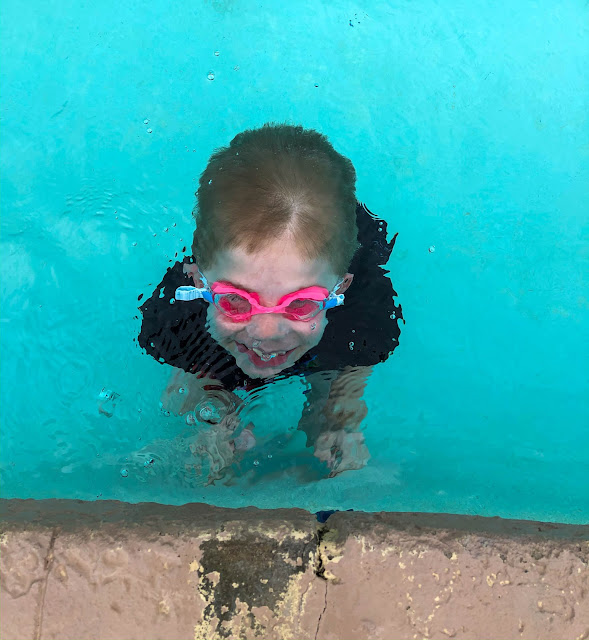 The kids were disappointed when we said we couldn't go to the pool on Saturday. We're trying to stick to school-hours only, when the pool is more likely to be empty. So now the kids are plotting to do schoolwork all day Saturday so that they can pick a day next week to take off and spend at the pool.
Today was another school day, however, so after our morning work we headed off to the pool. 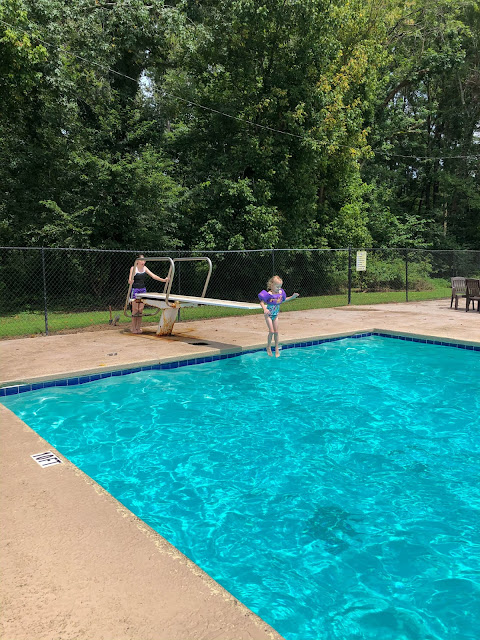 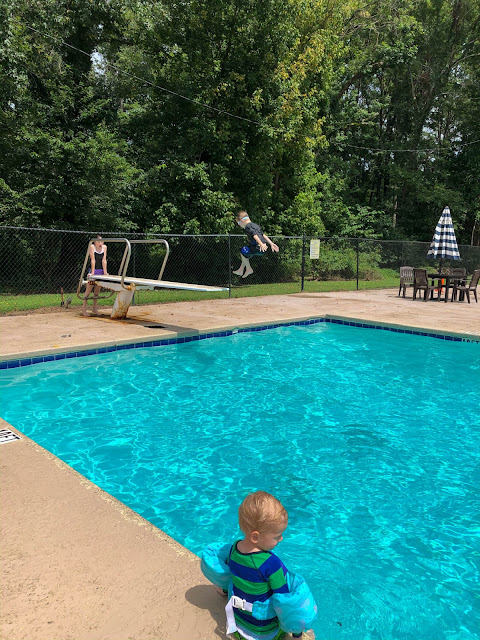 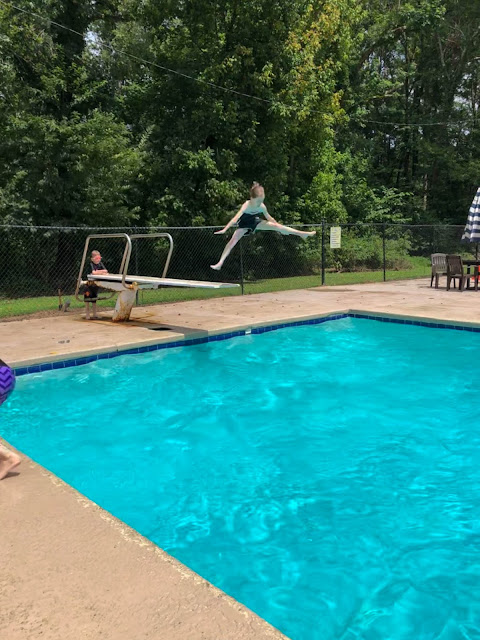 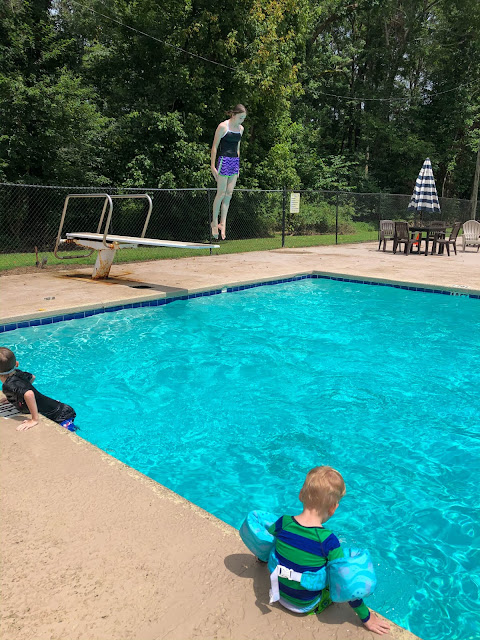 The girls wanted to work on standing dives today but were too afraid to actually try. They were on the deck hesitating and then Benjamin walked up and just...dove right into the pool like it was nothing. He pulled more than one accidental bellyflop while showing off his newfound diving skills but is really quite the natural.
Here's Rachel playing with Alexander: 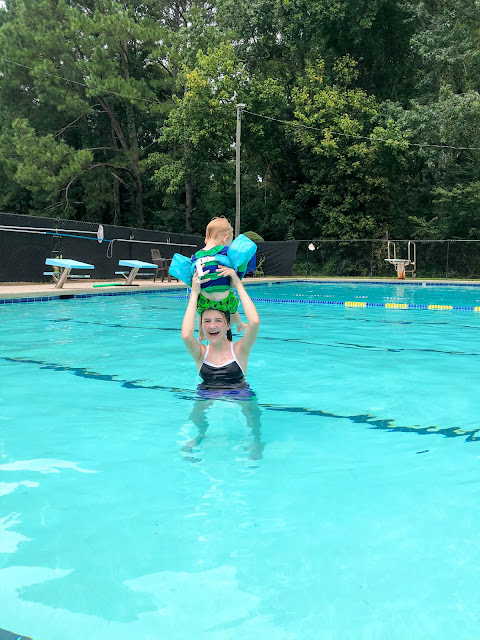 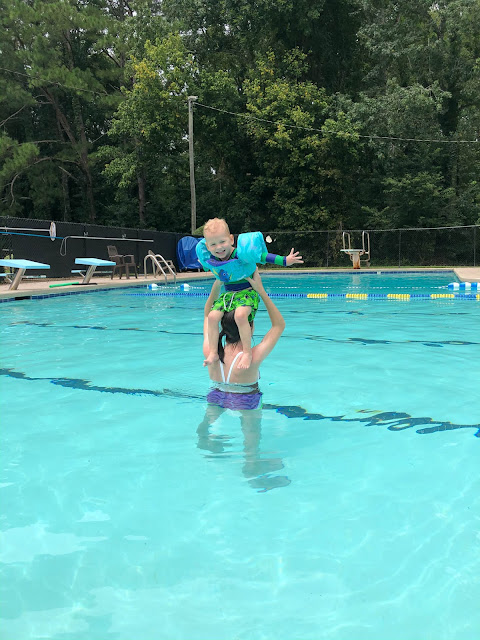 And here he is working on his back float: 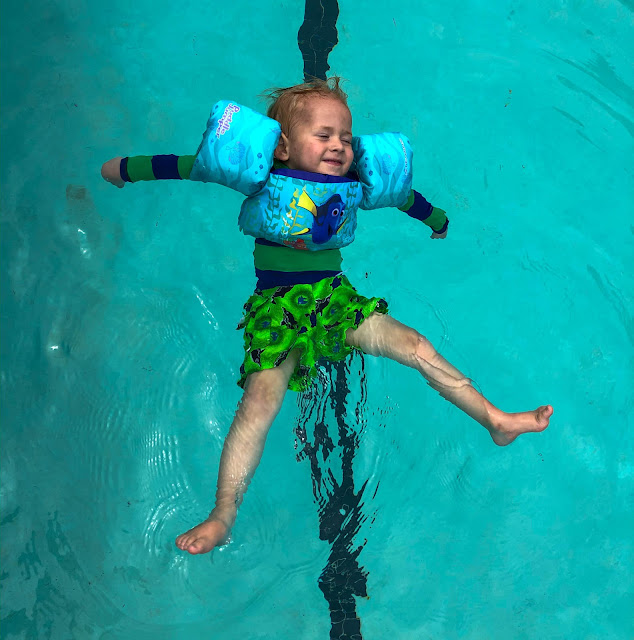 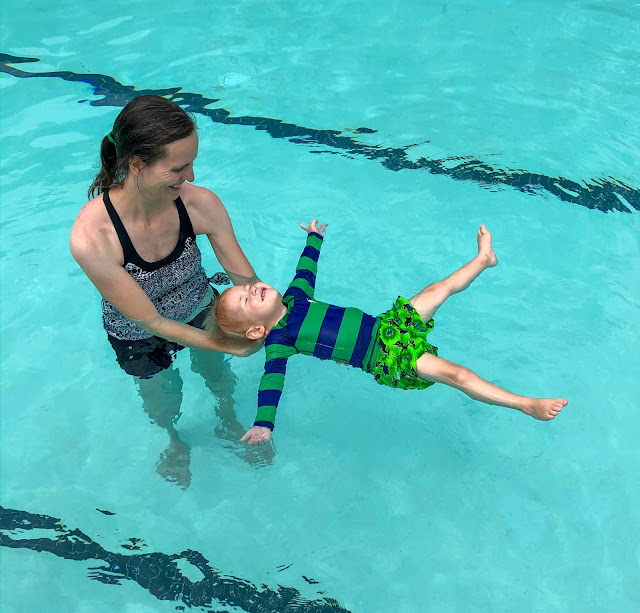 And doing what he wanted to do most of all—just have me hold him and walk him around the pool (he got up rather early this morning and really probably wanted a nap (if taking naps were his thing)): 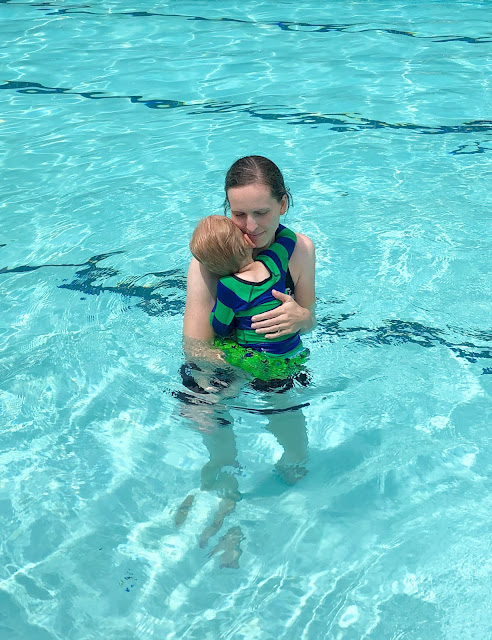 The bigger kids worked on their strokes and I made them swim several laps (between letting them just play) so I think we all managed to get a decent workout in. Again the little kids were cold and ready to go home before the big kids were. But at least both of them were happy today: 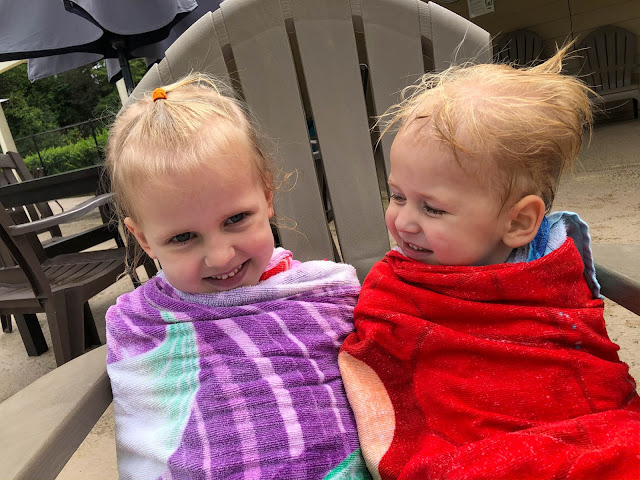 Alexander is the kissiest little boy on the planet and he can't seem to be close to any living thing without trying to kiss it (whether it's the cat or his family (including through the phone, if we're trying to video call anybody)...the only living things he's ever around...because corona) so it wasn't long before he started kissing Zoë and she started kissing him back, the little cuties. 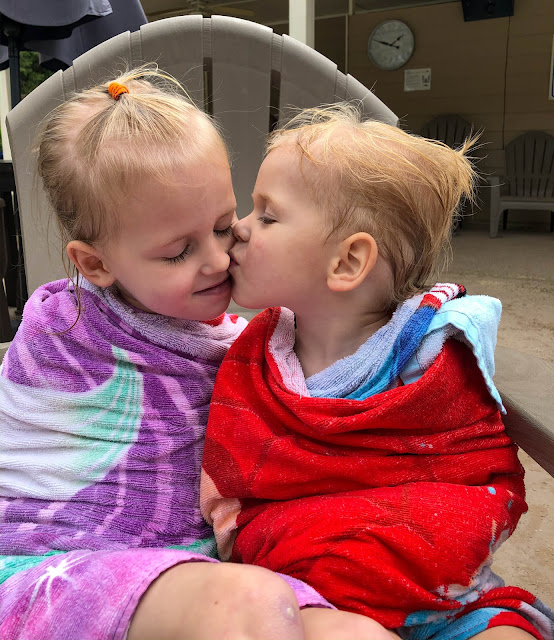 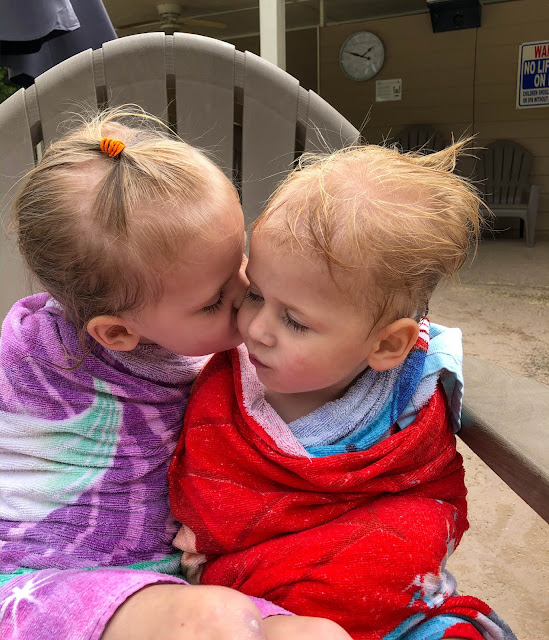 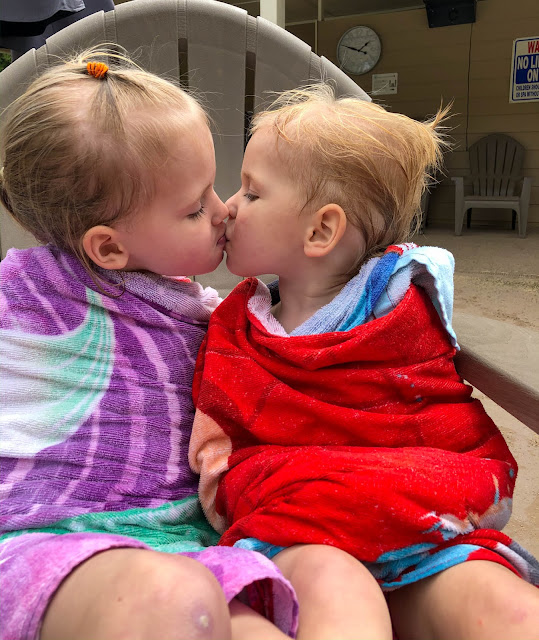 I guess they weren't too bored waiting for the big kids to finish swimming because we had a lovely view of these crane-thingies and the kids enjoyed watching the men work on these electric wires. 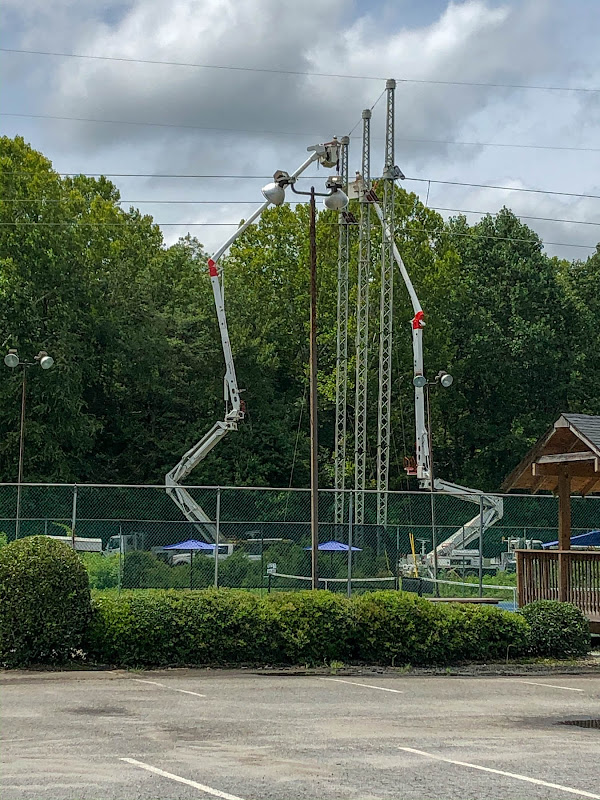 We spent three hours at the pool today (Daddy was so happy to have a quiet house to work in for so long) and when we came home the kids dove into the rest of their schoolwork. 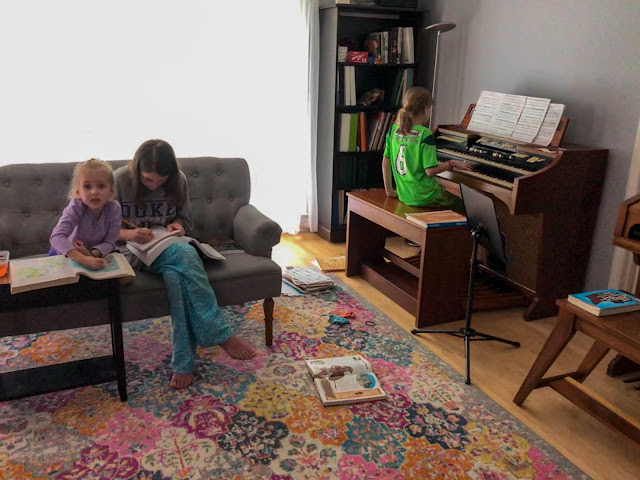 We managed to get it all finished by bedtime again, but I'm sure they'll want to go to the pool again tomorrow, which means it will be another long slog of a day. But well worth it because we might just meet our summer dream of being decent swimmers by the end of pool season, a goal that seemed so impossible in May and June and July when the pool was packed all the time! 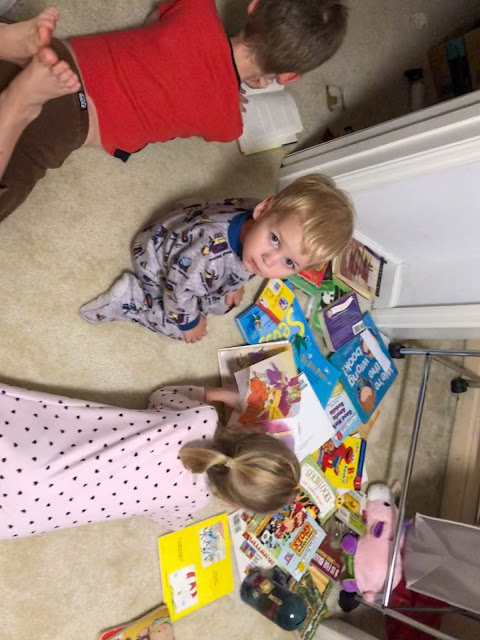