The children had dentist appointments this morning. I didn't really want to take them but the office is (perhaps understandably) being a little aggressive about getting patients in. They let us change our appointment to a Monday so we could be the first in the office at the start of the workweek. They assured me that all staff wear double masks and a face shield. So we (bravely) kept our dentist appointments.

We took two cars, me with the little ones and Andrew with the bigger ones. Since there is nothing to do in the waiting room anymore we thought it would be best if the little ones weren't forced to wait around for a long time. So I went in with them first and helped them rinse out their mouths and wash their hands before heading back with them.

Zoë went first and was rather brave. She said that usually when they ask her if she wants to watch anything on the television she just shakes her head no but today she was going to be brave and tell them what she wants to watch. "I can pick anything on Netflix!" she said. She ended up picking Llama Llama, which is funny because when Miriam got in there after her she was too shy to ask them to put something different on, so Llama Llama was playing the whole time she was sitting in the chair (she had been embarrassed to answer Rachel (who picked Stranger Things)  immediately on the ride home and didn't confess it until we were around the dinner table). Anyway...Zoë got to watch Llama Llama while she had her teeth cleaned.

Here she is waiting: 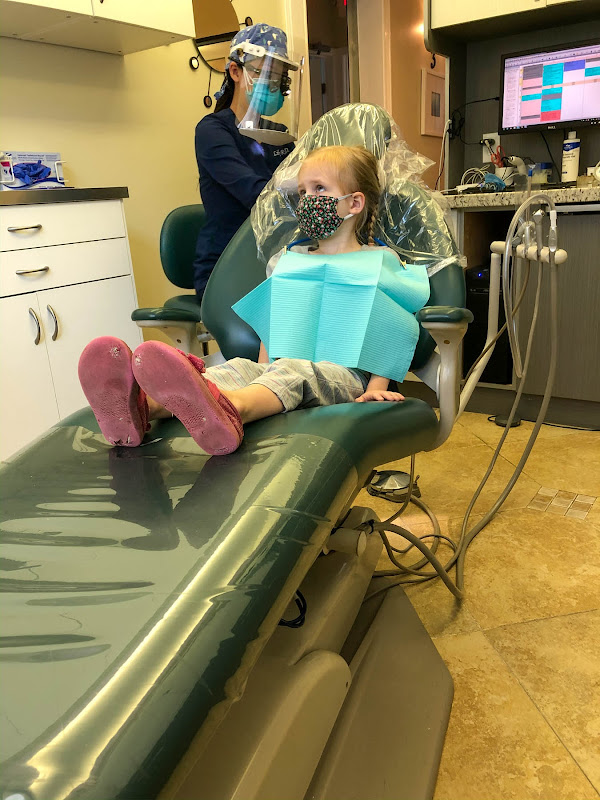 And here she is being worked on: 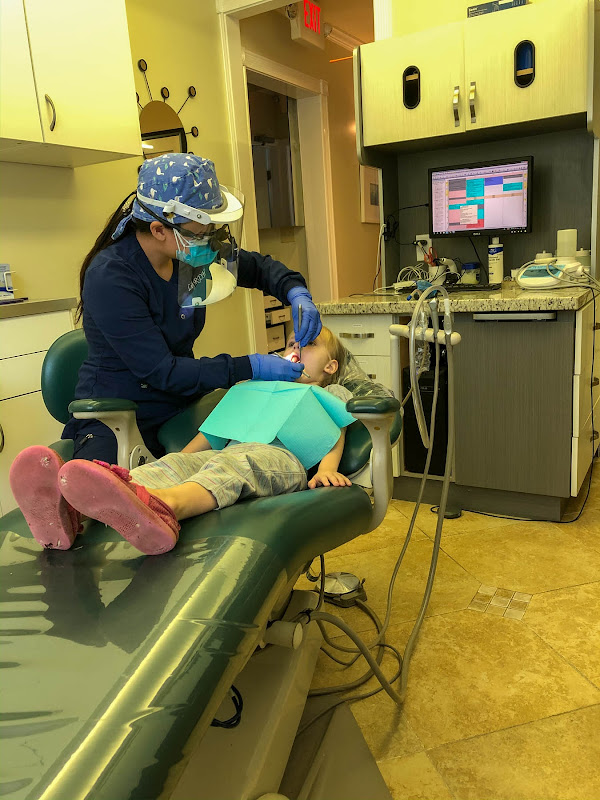 And here's a shot of Alexander and me in the corner watching Zoë (or, in Alexander's case, sneaking a peek at Llama Llama): 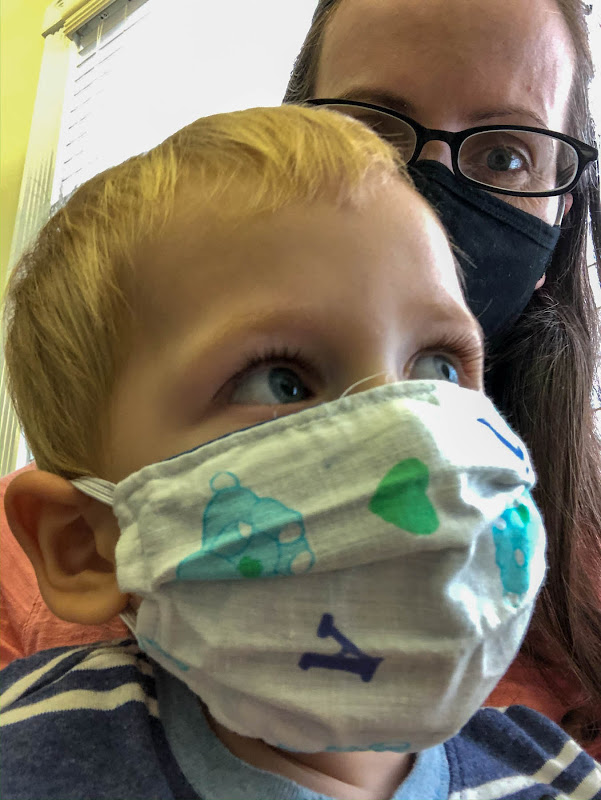 Alexander was so good when it was his turn. Once again he hopped onto the chair and got his mouth nice and ready before the hygienist was even ready herself (she's reaching for her face shield in this picture): 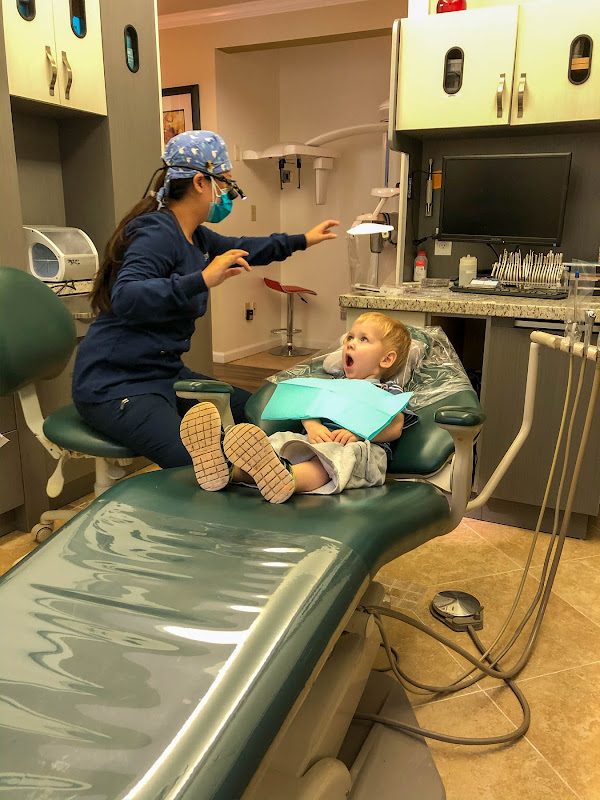 He was so brave and still the whole time, even though they forgot to even ask him if he wanted to watch a show (so he didn't have anything playing and instead stared at a black screen): 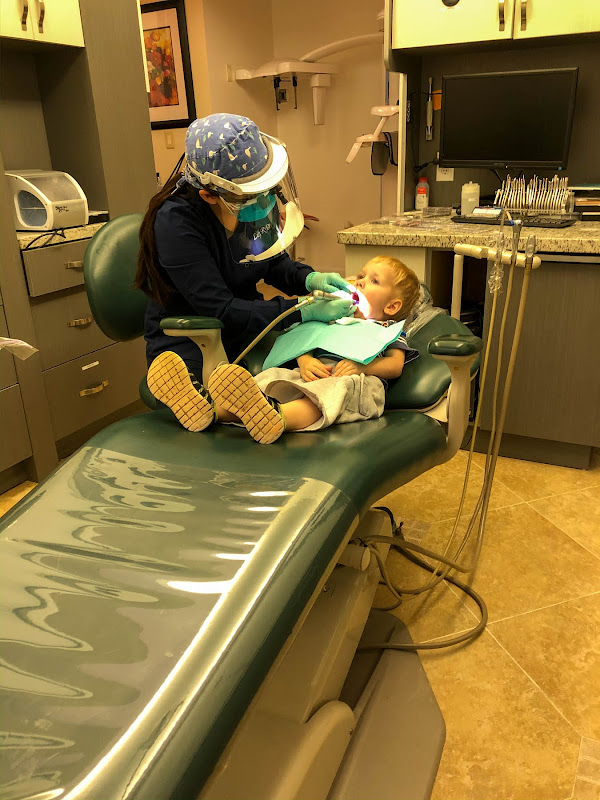 Benjamin came in for his turn while the dentist was with Zoë and while Alexander was getting his teeth cleaned. I'm happy to report that no children had any cavities! Those electric toothbrushes are pricy but I'm pretty sure they work miracles because usually someone always has a cavity! Benjamin, unfortunately, has very weak enamel on his teeth. This has been clear as they've been growing in (they don't look right) so they sent him home with some special mouthwash that should help him...we'll see...but I have a feeling he's just going to have an expensive mouth.
After Zoë and Alexander had both chatted with the dentist about their teeth, I packed them up in the van to go home and Andrew took charge of the dentist trip for the older three.
When we were home we had to run the kitty around because she was feeling hyper and then I got some lunch for Zoë and Alexander and we sat in the relative silence of a near empty household eating. It was almost surreal. "It's so quiet!" Zoë kept saying. "How is it this quiet?!"
We haven't had so few people in the house in literal months.
When the big kids arrived home we knuckled down for a schoolwork-filled afternoon. Usually we get most of our work finished in the mornings, but instead we were at the dentist (which I counted as a read-a-thon for our ELA work since everyone did a lot of reading while we were waiting (I even managed to get two book reports out of Benjamin)). Here are Zoë and Benjamin working in their math books together: 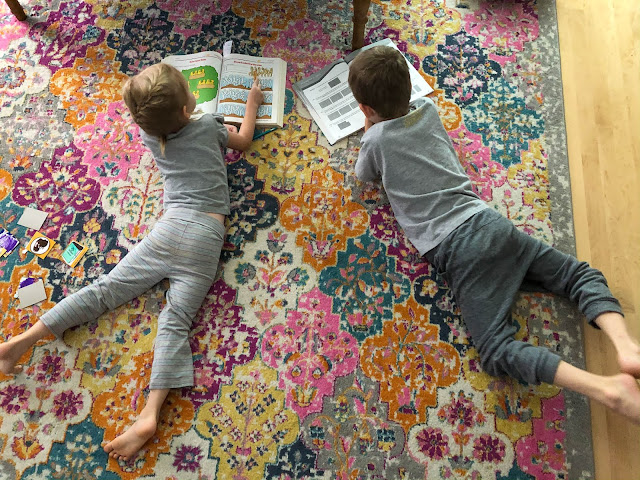 Today was, apparently, grey day. Zoë, Benjamin, and Miriam all dressed 100% in grey. It just so happened that Benjamin and Miriam both arrived at the breakfast table wearing grey and when Miriam noticed she quickly ran up and chose a grey outfit for Zoë (who was still wearing her pyjamas). Even Alexander managed to wear half grey! It was pretty...bland...but their lively personalities more than made up for their choice in outfits and our home quickly went from unbelievably quiet to absolutely cacophonous really quick once we were all home!

And now we shouldn't have to go to the dentist for another six months!

Maybe by then the world will be a little more normal.