Rachel was just telling me how it was strange for her to think of her friends in Durham as being her same age—as kids old enough to be in middle school, doing thirteen-year-old things—because she thinks of them as being somewhat frozen in time. They will forever be ten-year-olds, stuck in Mrs. Garrett's fifth-grade classroom, doing things that ten-year-olds do.

And then I got a message from her friend Elijah's mom, announcing his Bar Mitzvah, which under ordinary times might have been a huge blow out, but which under present circumstances was slated to be a virtual celebration. We would have been happy to attend either way (although attending in person would have required a lot more effort on our part...and probably their part as well, to be honest) but were more than happy to tune in and watch.

They had created a little sanctuary in their home, featuring a quilt Elijah's grandma made (which is simply spectacular, don't you think?). Rachel especially liked that the scriptures were on a scroll (exciting!) rather than in boring ol' book form. Elijah did a great job with his recitations (Shoftim and Maftir) and lecture, or d'var torah (talking about the torah). He spoke about how if someone purposely commits murder their punishment is death (in the torah) but how if they commit manslaughter it's simply banishment, because although they didn't intend to cause harm, they still did cause harm. One's intentions are irrelevant; if harm is caused they still need to be responsible for their actions. He said that today we often see examples of purposeful harm—such as blatant discrimination based on religion or race or sexual orientation—and that those instances of harm are relatively easy to condemn and, hopefully, rectify. But there are also many examples of implicit bias that are alive and well in our communities that we have a duty to root out, such as the fact that black children are more likely to face suspension from school than white children. The teachers and administrators might not feel they are being racist when they suspend a black child while offering more leniency to a white child, but they are, and we need to be watchful for these smaller, unintentional acts of harm so that we can responsibly avoid them.

He said it better than I did, I'm sure. He really did a great job! 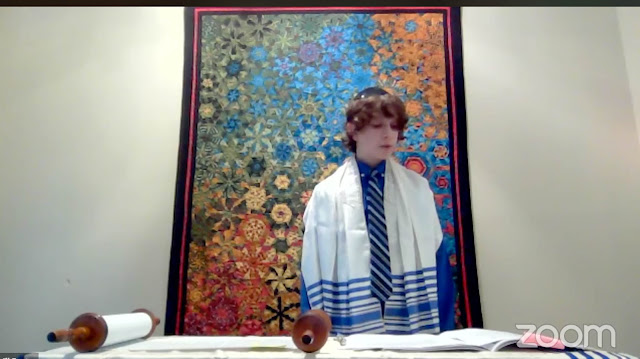 We got to listen to a lot of the songs from their shabbat service, which Alexander enjoyed (that's the first thing he says about anything, "Oooh! I like this music!"). I liked how the congregation celebrated just...everything...birthdays and achievements were being mentioned in the comments and everyone was congratulating everyone and celebrating together. And then Elijah's family and friends were excused to go celebrate more with Elijah while the congregation began the Kaddish, which is a prayer of mourning, and the Rabbi gave a wonderful message about needing to mourn with everyone in "this space," just as we'd rejoiced with everyone in "this space." And I kind of loved that—both the fact that the Rabbi was really good at defining what our space, our sanctuary was, and the fact that they did, like, a really good job at rejoicing with each other and mourning with each other. Again comments started streaming in about everyone's grief and people were commenting back with comments of support and love. It was a really beautiful thing. I didn't stay for that whole part because we did have to get over to Elijah's celebrations, where they had some challah (our kids were so jealous that Andrew is making some challah for us today) and hoisted Elijah up on a chair while everyone clapped and sang Hava Nagila (including me, thanks to Harry Belefonte and Danny Kaye, because it was on a cassette tape of theirs that we would listen to on road trips when I was growing up).
We got to chat with everyone and introduce ourselves (and our cats, because Elijah's family also got a quarantine kitty (x2)) and say how we know Elijah and congratulate him. It was a great night overall and we're so proud of Elijah! Rachel sure knows how to pick good, good people to be her friends.
Posted by Nancy at 1:16 PM