The kids went outside to run off some energy after our ELA/SS time this morning and when I called them in they left the garage door open, which ordinarily wouldn't have been a huge deal, but today it was! When we started heading outside again later in the day I heard a rather intense amount of chirping coming from behind the door. I figured it was some overactive chipmunks "chip, chip, chip, chip, chip, chipping" to each other and that they'd scatter when I opened the door.

I was right about one thing.

There was certainly some scattering when I opened the door, but it wasn't those pesky chipmunks chipping. It was an entire flock of fledglings chirping wildly! There must have been half a dozen of them, if not more! All of them just flapping about and chirp, chirp, chirping! 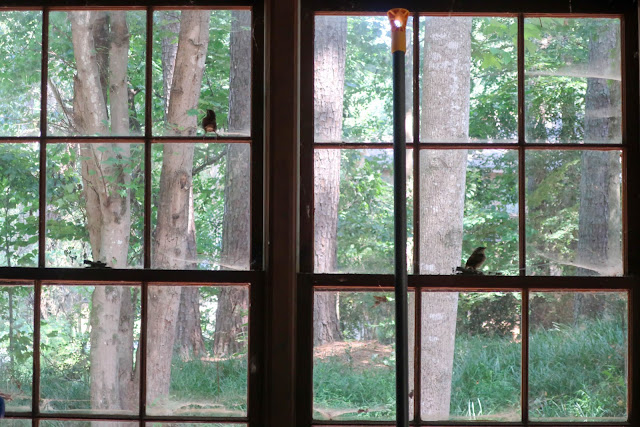 They didn't seem to know what to do. They seemed to want out of the garage (we're not sure how they got in except that the garage door was wide open (because there isn't a nest in our garage that we could find)) but were so confused about how to leave. They kept going to the window trying to get through (which was funny considering the garage door was, again for the record, wide open); their mother was on the other side of the glass calling to them.

But, like, you've heard about our windows, right? They are in rather poor condition. Most are screwed shut. Others aren't screwed shut but won't open, anyway. Others might be pried open but then won't stay open...

Anyway, there were birds just...everywhere. Clinging to the windows, resting on thumbtacks on the wall, sitting among our tools, perched on our car, nestled between the rollers for our garage door. They were cute (panicked) little things! 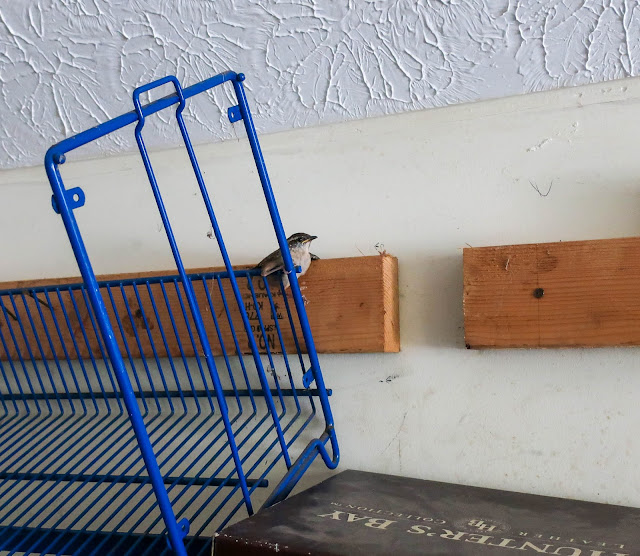 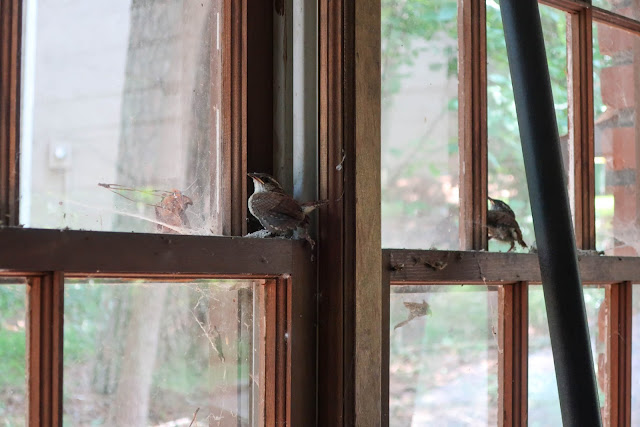 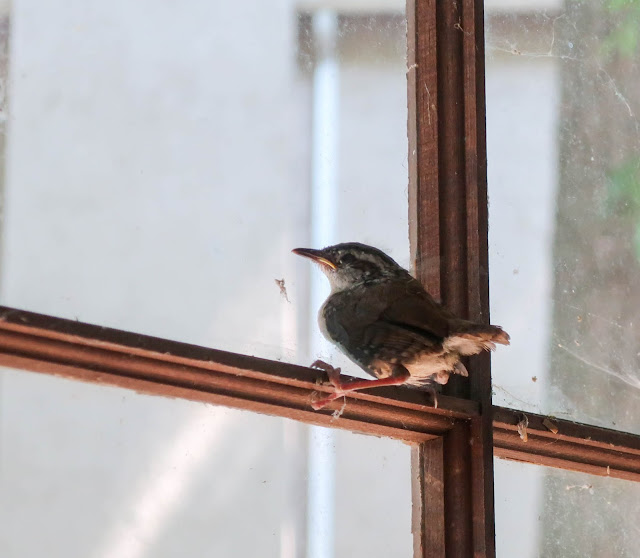 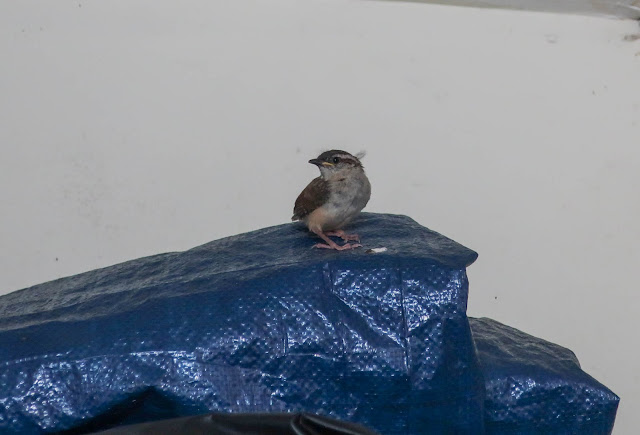 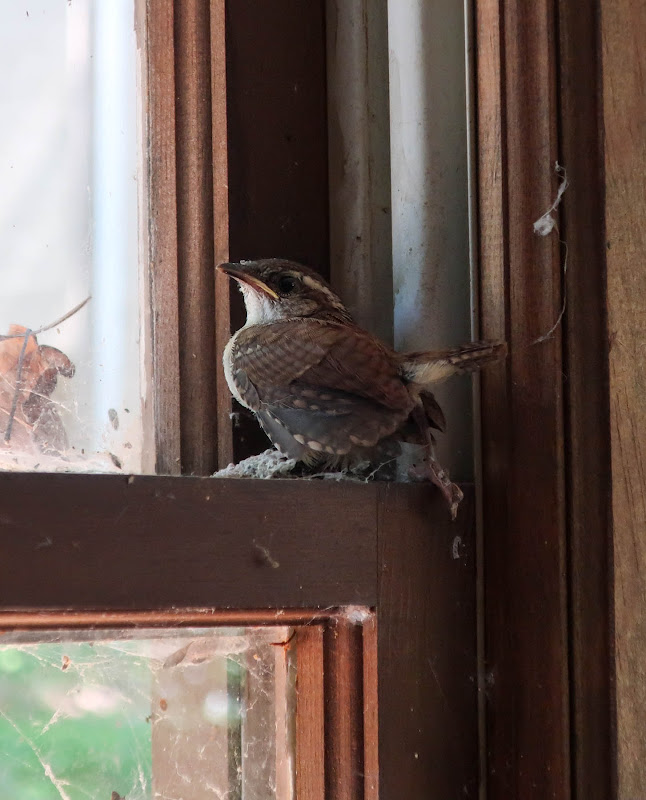 They're Carolina wrens (of course we looked it up), and we did everything we could to get them out of the garage. Rachel even pulled up the call of a Carolina wren, hoping the babies would follow the sound of the recording out of the garage. They just kept hopping and fluttering all around the garage while chirping madly.
Andrew chased a few out with a broom and then I took over (because I was worried he wasn't being gentle enough) and managed to convince the rest of the birdies to exit the garage. I had one hop right onto the broom, so I quickly carried it out and it hopped off and flitted into the bushes. 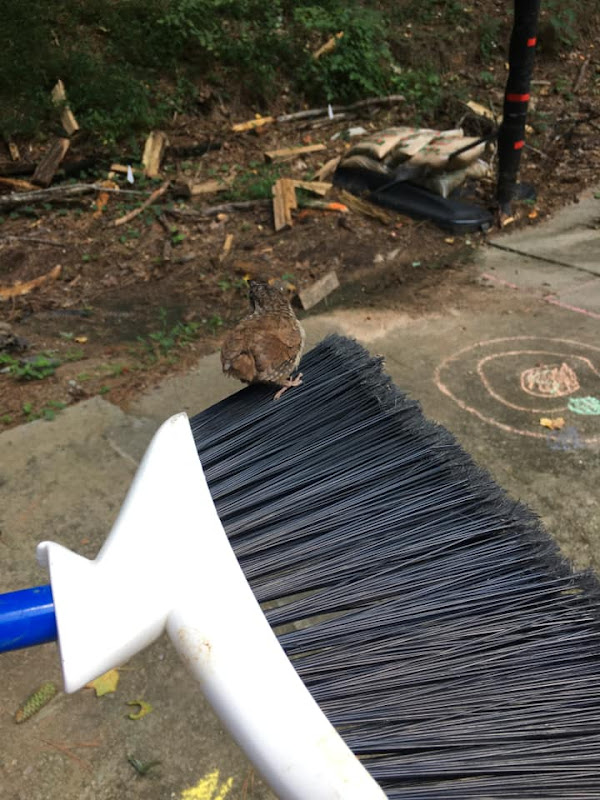 We're not sure where they came from, since we haven't been able to find their nest, but Benjamin did find an egg on the driveway near one of our bushes so perhaps deep inside that bush there's a little Carolina wren nest. 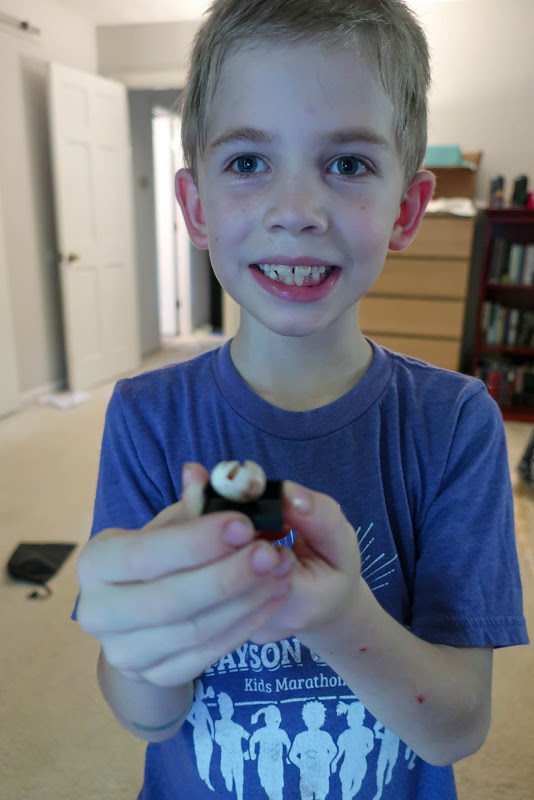 He thought it was interesting because you can see that this was an egg that never quite became a chick (there is a petrified yolk inside), but it does look like a Carolina wren egg, so I imagine it came from the same nest as the fledglings. Benjamin put it in his box of special treasures, which I will have to post a picture of sometime. It's...neat. 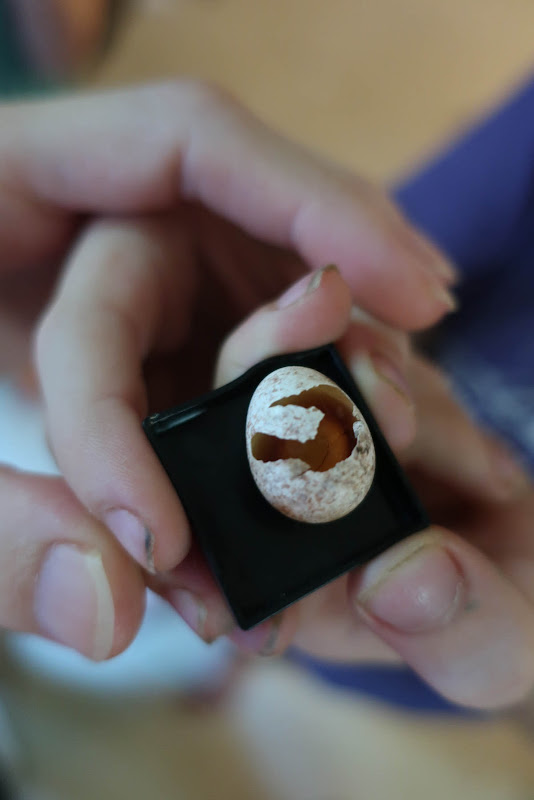 It certainly made for an adventurous afternoon!
Posted by Nancy at 1:04 AM