Yesterday was our 15th anniversary, a number that somehow seems big and small at the same time. We didn't really do much to celebrate, but fortunately we're both the kind of people who are okay with that so neither one of us felt neglected by our lack of fanfare. Andrew worked. The kids and I had a normal school day. Andrew took Miriam to her organ lesson. Rachel made pancakes for dinner. After we put the kids to bed we watched the first couple episodes of the new season of Doctor Who (we haven't sat down together to watch a show (besides Christmas shows with the whole family) for quite some time; and then we had to do two episodes because cliffhangers)).

It was a lovely quiet evening and just a generally happy day. Life is often generally happy and lovely and quiet around here (well, maybe not always quiet), but it is generally lovely and happy. I think we're very lucky to have that kind of satisfaction.

Andrew did an anniversary post on Twitter, so I decided to do one on Facebook, too. Publicly celebrating each other is a good thing to do sometimes, maybe? I don't know. Anyway, he caught me checking on his Twitter post and lightheartedly accused me of comparing our posts, which perhaps I was doing...a little. Not in an "I'm so sad that your post has so many more likes than mine" way, but more of a "Oh, look! Ade commented here so I'll like her comment" way. 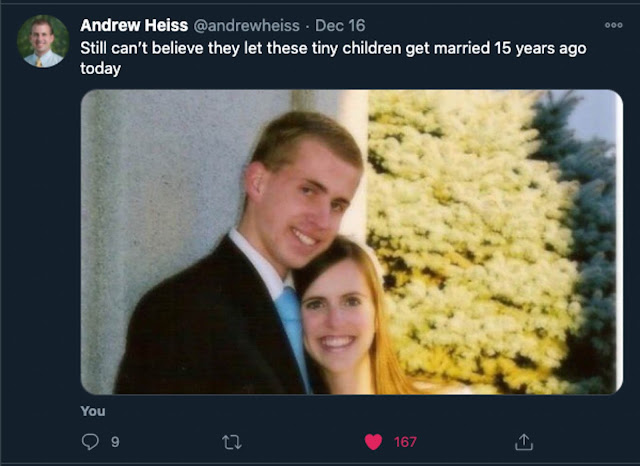 And he said, "Well, think about how many followers I have. Thousands. You don't have very many friends compared to that, so..."

And then I burst out laughing because this man, folks! He has a heart of gold but has the misfortune of sticking his foot in his mouth more often than not. Things just have a way of coming out of his mouth in precisely the wrong way. Lucky for him I think he's hilarious.

"It's fine," I said, patronizingly stroking his arm. "It's not a competition. I'm not upset. I'm not hurt. I was just looking."

"Like, the people liking and commenting on your post actually care about you. Most of my followers don't even know me. I'm just some dude doing data visualization to them. They don't know me at all."

"At least your followers know who you are..."

"I know what you meant."

So we've been joking about that conversation for the past 24 hours.

I just had to capture the moment when my "likes" caught up to his. As of this moment we both have 167 likes on our anniversary posts. If we divide Andrew's 167 by 7941 followers we learn that 2% of his followers liked his post (though, to be fair (or less fair?), you don't have to follow someone in order to like their post so it could be under 2%). If we divide my 167 likes by 1156 friends we learn that 14.5% of my friends liked my post. So, like, obviously I'm the way more popular half of our pair (plus I have 47 comments and he only has 9 (and half of those are mine (I mean, I'm just saying))). 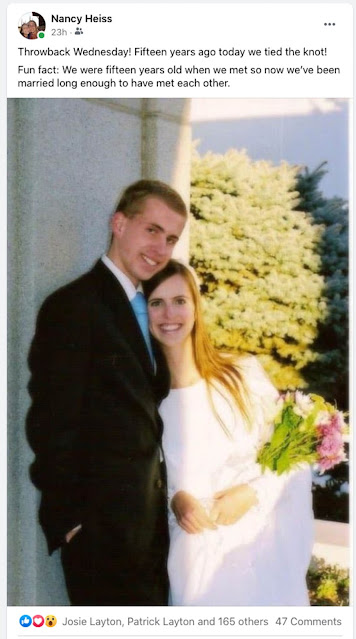 Anyway, 15 years down. We met when we were both 15, so this feels like a rather momentous milestone, as I mention in my Facebook post, we've been married long enough to have met each other...in some alternative dimension or something. I'm lucky to have found him and am so happy he asked me to share this adventure called life with him.
Now for more numbers (because Andrew likes numbers (you can ask his 7000+ followers if you don't believe me):
We have lived in 3 different states.
We have lived in 3 different countries.
We have moved 8 times (is that all? It feels like more than that; perhaps because they were always big moves).
We have obtained 5 different degrees, spending 12 (married) years in school (but I just started again so +1 semester).
We have had 5 children (a kid per degree, that's our motto, though I don't think we'll be sticking to that motto anymore).
We have had 1 pet.
We have owned 1 house.
We have been to 12 countries together (Italy, England, Austria, Jordan, Egypt, Turkey, UAE, Spain, Morocco, Israel, Canada and the US...I think that's all).

What other numbers do people usually do for these?
There's no way I could possibly calculate how many jobs we've had...maybe...

InBio secretary, Special Collections stacks manager, Harman Music...clerk, lexicographer, tutor, babysitter, swim instructor for me (that's 7 jobs).
Arabic teacher, graphic design instructor, tutor, TA/RA, library (reference and later media), typographer for FARMS and later METI (Middle Eastern Text Initiative), visiting professor, assistant professor (that's 11 positions but I think I'm probably missing some in there as well).
What is that, 18 jobs between the two of us? Sure. Something like that.
Temples we've been to: Timpanogos, Provo, Provo City, Payson, Salt Lake City, Manti, Jordan River, Cardston, Raleigh...and maybe someday Atlanta.* So only nine temples (someday soon 10).
I don't know that there are any other fun facts about us. We're pretty boring, really...
*I feel like Andrew maybe went with Rachel and the youth once but we didn't quite make it to a session before things closed down (my kids (Zoë and Alexander) were in a very clingy state of existence after we moved here so I didn't feel like I could just leave them to go to the temple for hours at a time because they would just scream nonstop for anybody (including Andrew, like when I would leave to go to the church in the evenings for activity days) and I just...I can't leave screaming babies with just anybody so I just don't leave them. Now we probably could go. I don't think they would scream if we left them with a babysitter (who would probably just be Rachel at this point), but we're in the middle of a pandemic, so...
Posted by Nancy at 2:50 PM