While Andrew, Miriam, Rachel, and I sat down to play Rummikub together, Benjamin chose to read (he's been cruising through his Christmas books) and Zoë and Alexander chose to draw. I won all three rounds (just saying) and Alexander kept calling for another round so that he could keep drawing.

At one point Andrew reminded one of the girls that "if you draw you don't get another turn."

"What?" Alexander squeaked, tears already forming in his eyes. "That's not nice! You can draw! And you can have turns!"

"You can draw," Andrew said.

"Okay. Play another round! I want another turn of drawing!"

Alexander drew some pretty amazing pictures of Baby Yoda and our family and many other things, but my very most favourite picture of all is this one of the two of us dancing together: 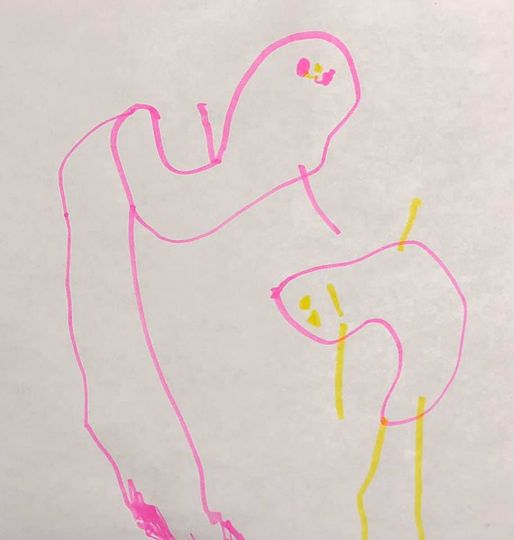 He and I were really cutting a rug!

We asked him for a little sampling of the dance and he gladly performed for us (pulling out moves very similar to ones he drew).

After three full rounds, we switched to a game my sister Kelli sent us called "Not Parent Approved," where someone reads a question and everyone has to submit the answer you think the question reader will find the most funny (many of the cards involve a little gentle potty humour, thus the name of the game). We're pretty immature around here, so we were laughing quite hard (and Rachel and Miriam were shocked (and Benjamin was pleased) to find that Benjamin's cards kept being picked as the most funny).

When it was my first turn to read a question, everyone asked for more answer questions (to replenish their supply), so I dealt some out...but I did it from the wrong end of the deck and ended up dealing out blank cards (which exist so that you can write your own). Everyone turned those back in to me and I figured out where the real cards are and dealt those out. Then everyone chose an answer and turned them in to me.

I read one answer that was so-so, then I picked up the second answer and found that it was blank.

"Okay, who turned in a blank card?" I asked.

Everyone claimed that it wasn't them (which is something I'm fairly used to).

Again everyone professed their innocence.

I turned the card around to show everyone. "Blank—see?"

"What?" I turned the card back around to look at it. "What do you mean?"

"It's blank," I said, turning it back around to show everyone.

"It says Siri!" everyone said.

Finally I figured out that my thumb had been covering that one very small word on the card (most answers are a sentence). So we all had a good laugh about that and then the next answer was so good that I couldn't even read it for laughing so I had to skip it and read the next answer and then go back to read the funniest answer, which I could hardly get through (it was Rachel's answer).

It doesn't feel so funny writing it out this way (perhaps because I can't remember the questions or answers), but we had a lot of fun playing together.