The children have been wanting new pyjamas for a while. True—we made pyjama bottoms around Easter, but that was months ago and the children have been wearing nothing but pyjamas since then. We also realized that, in the past, Grandma has been the one who consistently sent us pyjamas for the kids. Not that she did it every year, but frequently enough that the older children all know what pyjamas they've gotten from Grandma (the Star Wars jammies, the Fruit Poop jammies, these jammies, etc (even after she died she kept supplying the kids with pyjamas because Rachel and Miriam have been sleeping in Grandma's t-shirts since she passed away). Other than new Grandma jammies every now and again, the kids have largely subsisted on hand-me-down pyjamas, which I think is totally fine. But also they've been wearing pyjamas so often that all their pyjamas are falling apart—Rachel put a big hole in her red flannel pyjama bottoms (a hand-me-down from Auntie Josie) and Benjamin put a big hole in the knees of the pyjama bottoms we made for Easter. Anyway, my point is that some of our children were quite desperate for new pyjamas and we finally realized that new pyjamas were no longer going to materialize out of thin air. (Another layer of growing up, I guess).

So we got the kids pyjamas for Christmas.

It started with me, technically. Andrew was at Costco (like back in September or October; he doesn't go to Costco these days because (a) Christmas rush and (b) COVID is so absolutely, ridiculously widespread right now) and he picked up a set of the fuzziest pyjamas for me (in some sort of lame attempt to keep me warm so I don't freeze him to death with my feet when I climb into bed, probably).

"Because Rachel has been begging me for new pyjamas for weeks now!"

So the next time Andrew went to the store (which was probably a good month later), he picked up a second set for Rachel. Because we can do that now—we can pick something up for me and find it will fit Rachel, too (all except for shoes; I actually had her borrow a pair of shoes for our family pictures because she doesn't have dress shoes that fit...but we never leave the house so there's no need to get her dressy shoes right now. They're a cute pair of...closed-toe, open-back high heels. The open back part is important because it meant Rachel's feet could stick out the end. Her feet are several sizes larger than mine).

And then he picked up new footie jammies for Zoë and Alexander, who haven't yet learned to sleep under their covers (Benjamin hasn't either, but he doesn't complain about being cold in the middle of the night). Alexander refuses to wear footie jammies with holes in the feet (it's a texture thing, I think) and when I cut off the feet part so his long, gangly legs can poke through...his feet get cold. It's this whole battle. So Andrew was like, "We honestly can afford to just get him new pyjamas."

Which is new for us—being able to afford luxuries like new pyjamas—so I forget that sometimes.

Anyway, Andrew picked up some footie jammies for the little ones and then I was like, "We can't give everyone else pyjamas and then not give Miriam and Benjamin pyjamas. They will totally notice!"

Especially because Benjamin's pyjamas are all so old. He came down wearing some of his pyjama shorts (size 5...still in his drawer, even though Alexander is closer to being 5 than Benjamin is) and said, "What do you guys think—are these pyjamas shorts or underwear?" They were that little on him.

Sometimes kids grow so fast you don't notice things like that until...they are pointed out to you like that.

So I went online and found some pyjamas for Benjamin and Miriam and we were all set.

We had planned to give the kids pyjamas on Christmas Eve, but then decided to last night because one set of Benjamin's pyjamas are Christmas-themed and I figured it would be nice for him to enjoy them in the excitement before Christmas rather than only in the afterglow. Zoë was already upstairs getting ready for bed when I remembered that we'd decided to give the kids new pyjamas that evening so we called up for her to stop finding pyjamas.

"Come back downstairs! We need to do something first!"

She skipped back downstairs shamelessly clad in nothing but her unders.

"Oh, good. You're here," I said. "And you're...naked. That's fine. Everybody! We're opening presents in the living room but you only get a present if you're naked!"

Rachel and Miriam were very embarrassed by this surprise requirement.

They rolled their eyes and went into the music room fully clothed. The boys, however, took my words quite literally and immediately stripped off what they were wearing and scampered into the living room in their underwear. 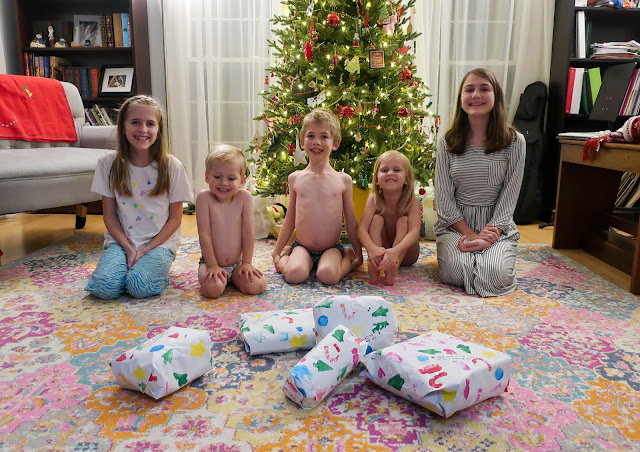 Alexander and Zoë opened their pyjamas first and were both very excited: 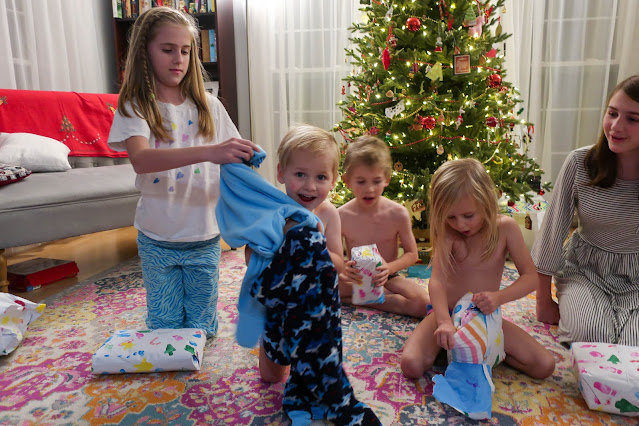 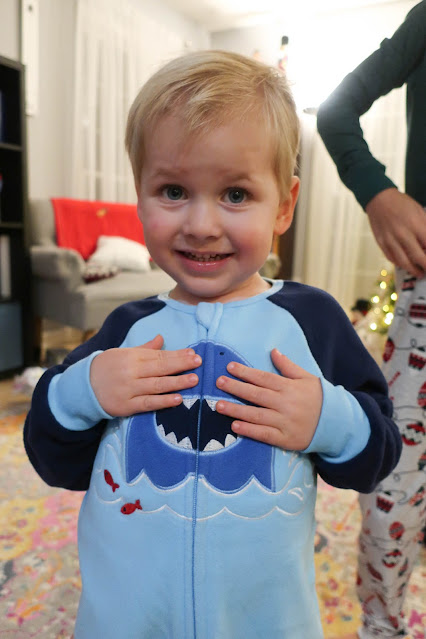 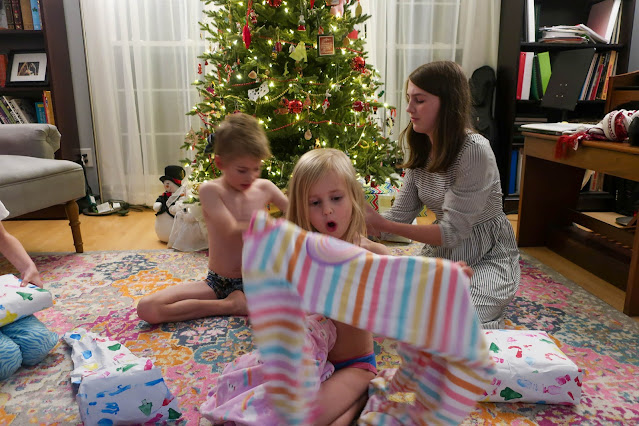 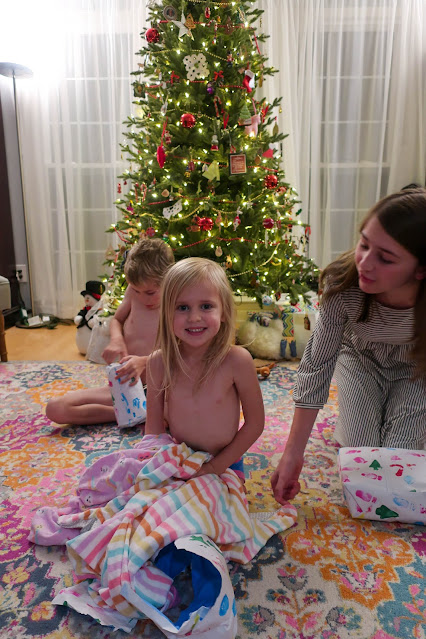 Benjamin really likes his Christmas pyjamas. The other pyjamas he said weren't exactly his "vibe" but that he appreciated the softness of them and would definitely wear them. (Sorry, buddy—they were what was on sale! Eventually...maybe...I'll get over my thriftiness (but I doubt it)). 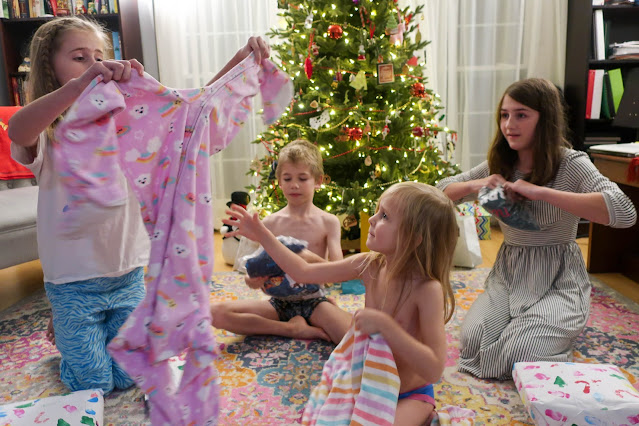 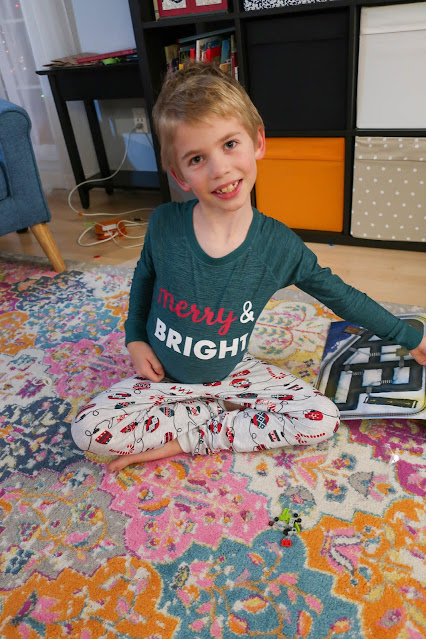 Shopping for Miriam can be tough because she's so tiny for her age. A lot of things her size still look rather...juvenile...for someone on the cusp of womanhood. And I totally get that. I mean, finding shoes my size that aren't pink, sparkly, light-up shoes (that don't feature Disney princesses) is a real challenge! So I did my best to pick out patterns that were grown up enough for her but still her size. I settled on unicorns and llamas because those are both cutesy creatures that are cool beyond childhood. And...both sets came with sleep masks—so that was exciting!! 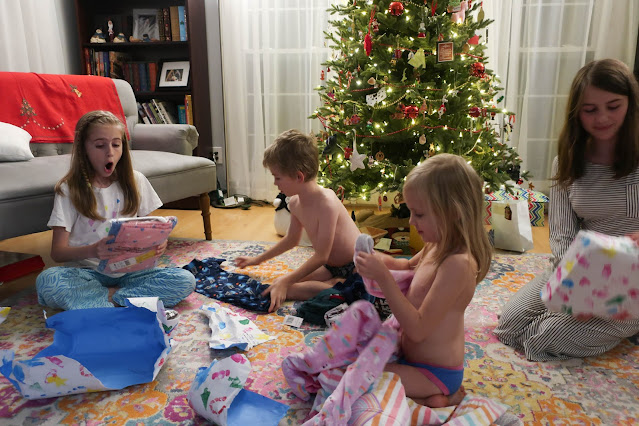 Being the generous person that she is, Miriam immediately gave one of the sleep masks to Zoë, who has been pining for a sleep mask for quite some time.
And here's Rachel opening her pyjamas: 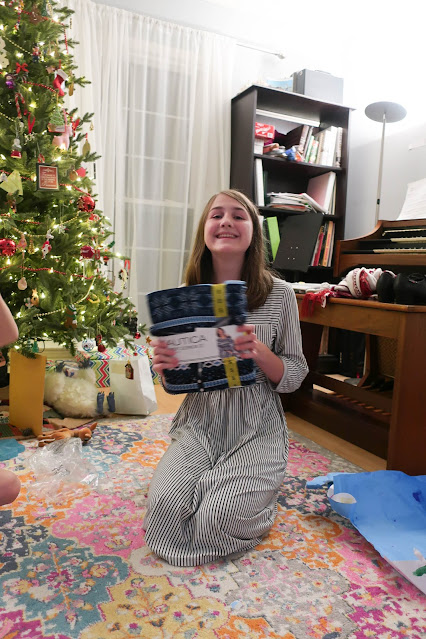 Technically she opened the pyjamas for both of us. I wrapped them together so that Rachel could choose which pair she wanted. She picked blue. And she was very excited to find that they have pockets!!
Here are all of the kids in their new Christmas pyjamas (multiple shots because I can never decide which shot I like best): 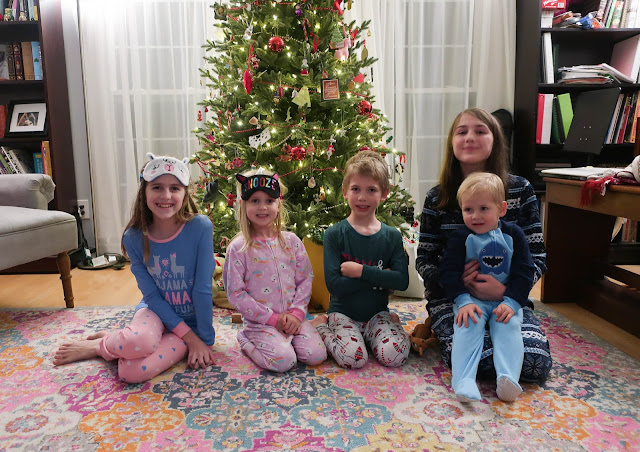 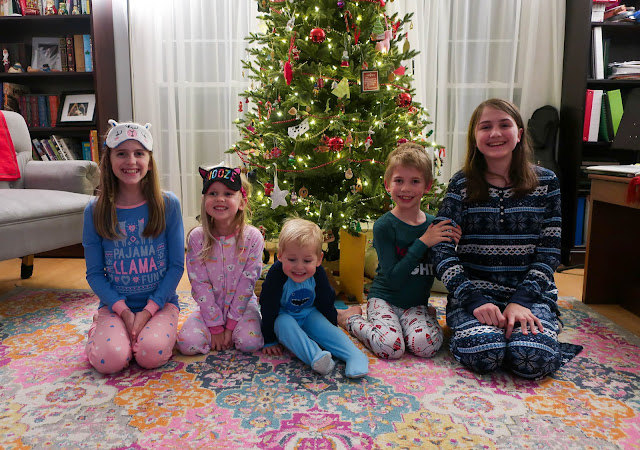 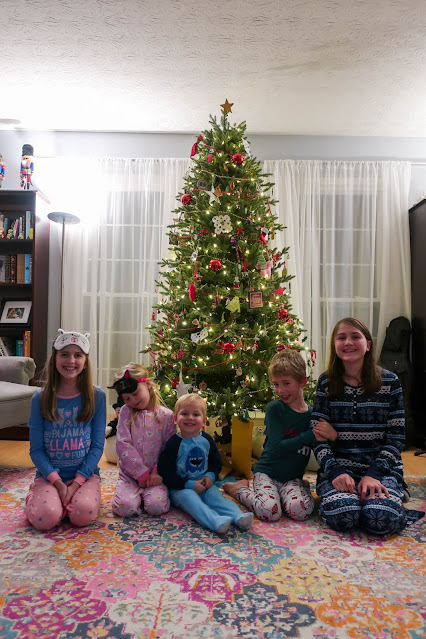 "And now a biwwy one!" Alexander said, so the kids got silly. 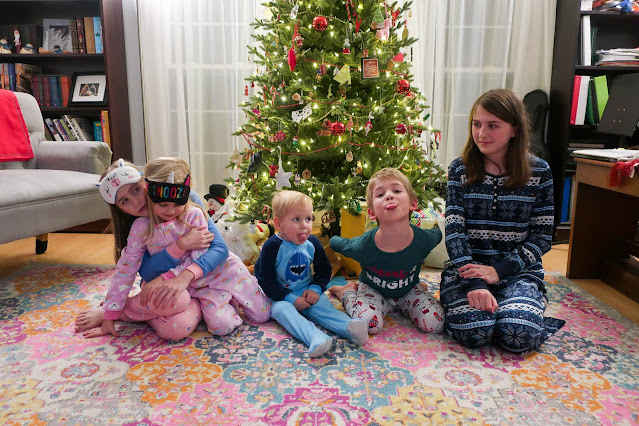 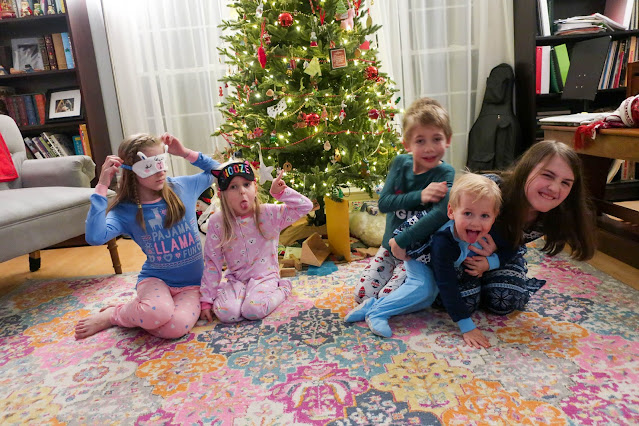 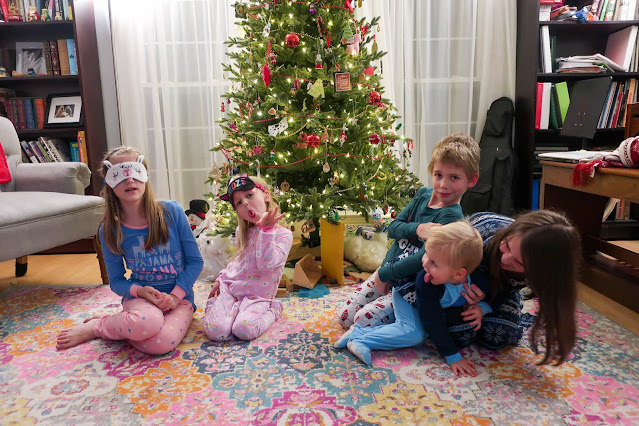 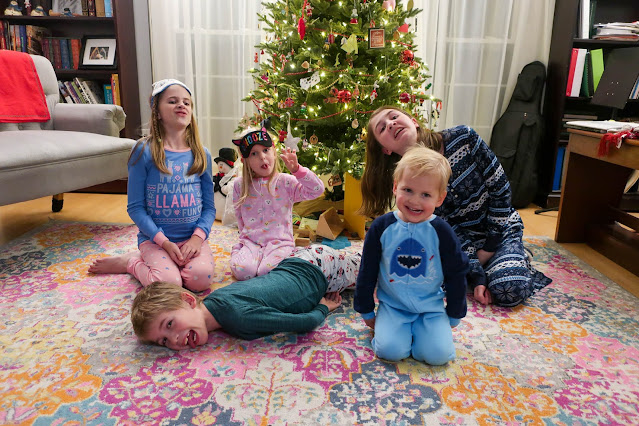 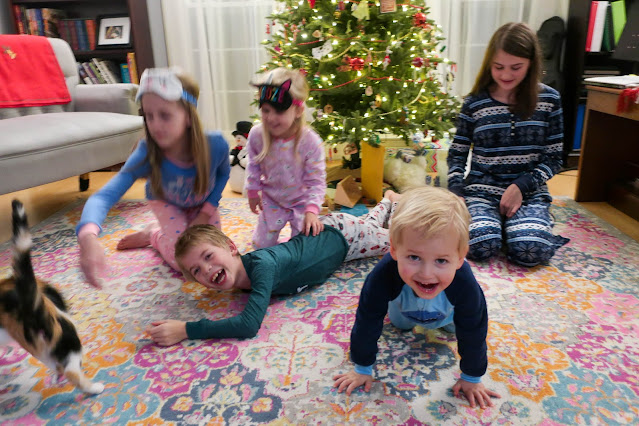 Rachel and I also needed pictures in our "matching" (in style, not pattern) pyjamas: 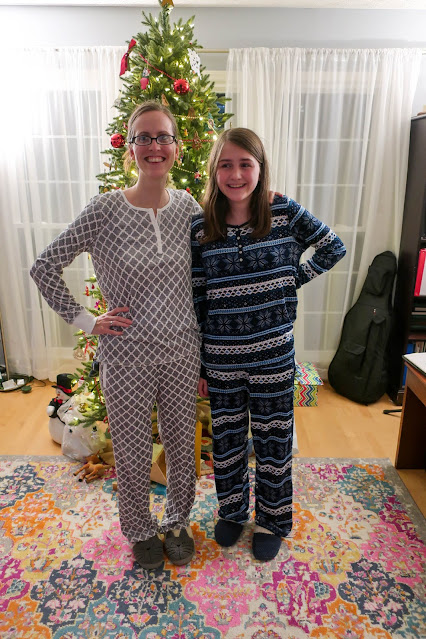 And then we also needed a goofy picture: 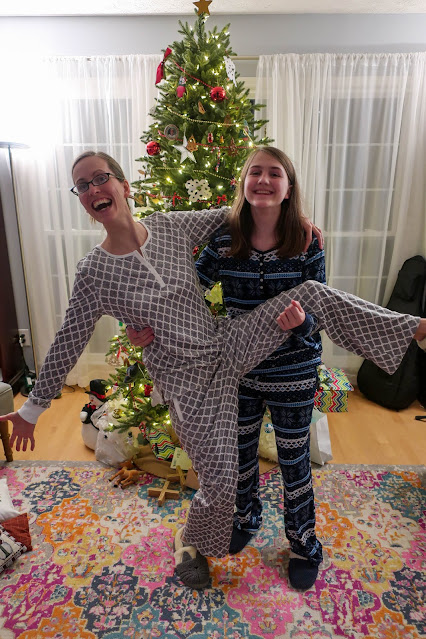 Fun fact: Rachel can pick me up and hold me now...but I can no longer pick her up to hold her. 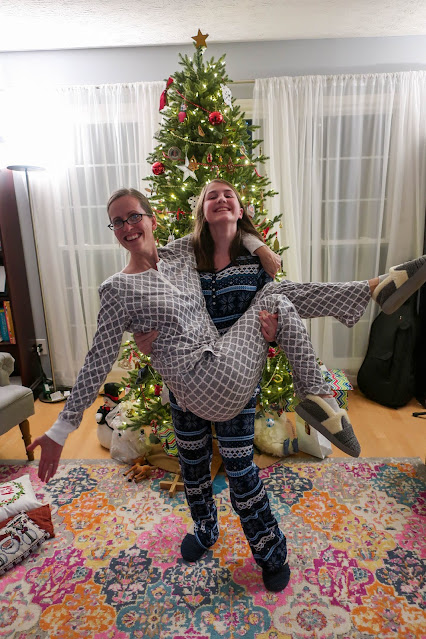 Clearly I need to start working out. 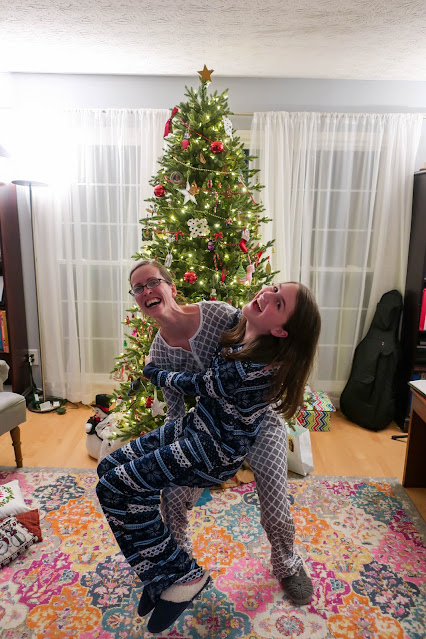 Today has been officially declared "Pyjama Party Day" by Zoë and Alexander, who've insisted everyone remain in their pyjamas this far. And so far no one is complaining.
Posted by Nancy at 12:47 PM