Alexander found a blue shovel in the toy box a while ago and suddenly his greatest dream was to visit the sandbox. He carried that shovel around with him for days and I kept promising to take him...eventually...but we live in a city where even finding appropriately socially distanced outside time can be difficult. But the weather was rather nice in the few days before Christmas (before we were plunged into below-freezing weather) so I decided to take Zoë and Alexander to the park while the bigger kids did one of the segments of their Lord of the Rings marathon.
The kids were fine without jackets, but I felt a little chilly. I guess I should have run around more!
We weren't wearing masks when we first got to the park because we were the only ones there, but then another family arrived so we put our masks on while they were getting out of the car. Here are the kids swinging: 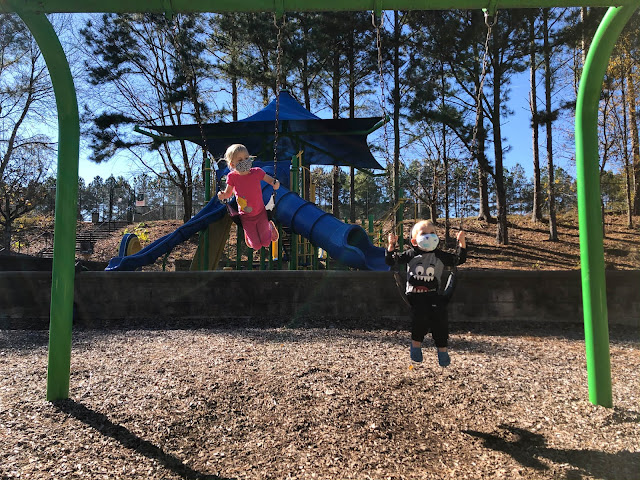 Zoë is getting very good at pumping on the swing, though she still needs a bit of a push to get things going. Alexander still likes the baby swing but is insisting on the big kid swing more and more. 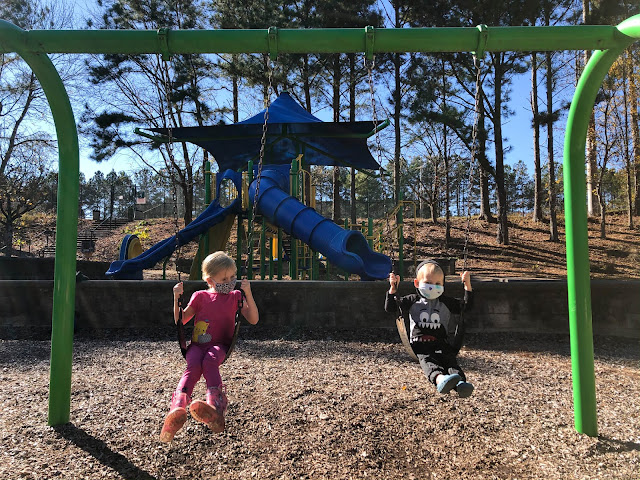 Here they are running down the path—Zoë has a bubble wand and is leaving a trail of bubbles behind her for Alexander to pop (but the bubbles didn't really show up in this picture, so just know that's what they're doing here): 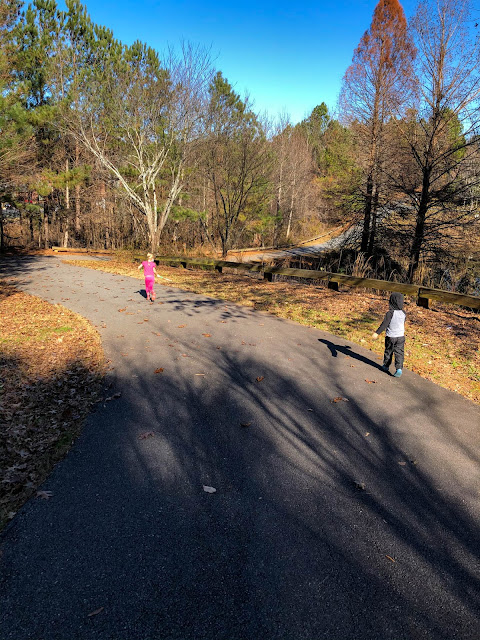 One of the paths has bench swings every so often and the kids like to race from swing to swing while we walk, so here they are "resting": 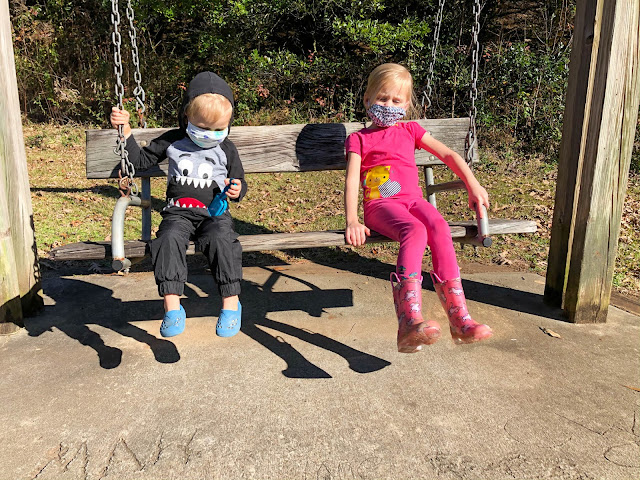 And here's Zoë starting up a bubble race again: 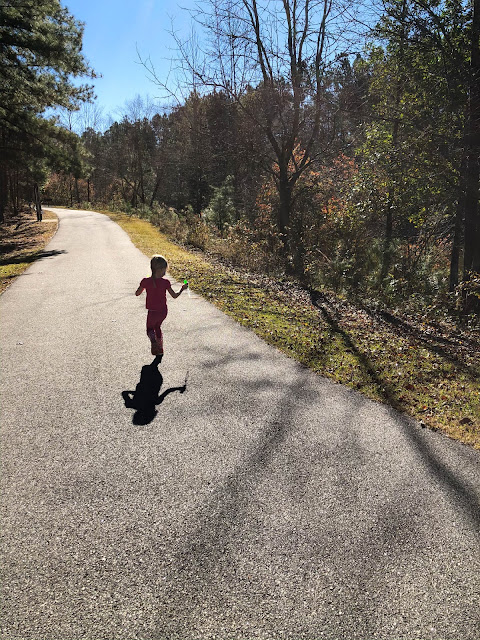 The sandbox (which is truly a volleyball pit) was occupied, so instead of playing there we went to a little strip of sand between the path and the pond. It's definitely not designed for playing in...but sometimes you have to work with what's available. 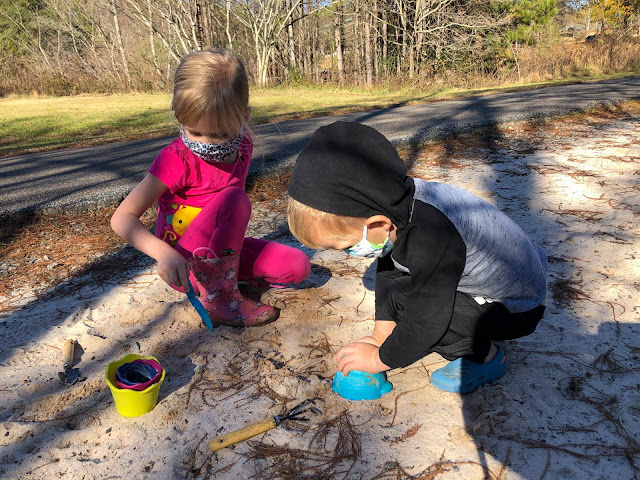 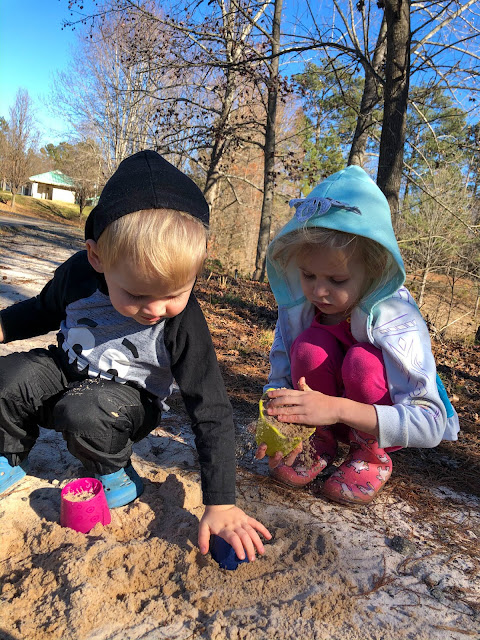 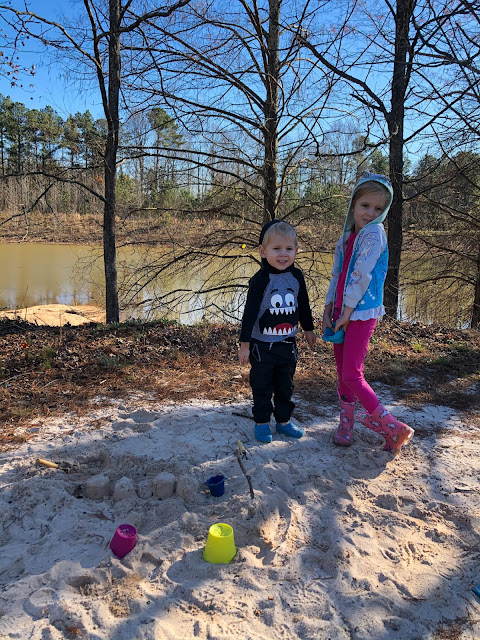 Alexander was happy he got to use his sand toys. Here he is bringing a "cupcake" over to me. I'm standing in the sun because it was a little too chilly for me in the shade. You may have noticed that I convinced Zoë to put on her sweater (because it was chilly in the shade), but Alexander kept refusing even though he was cold because he already had a sweater on. 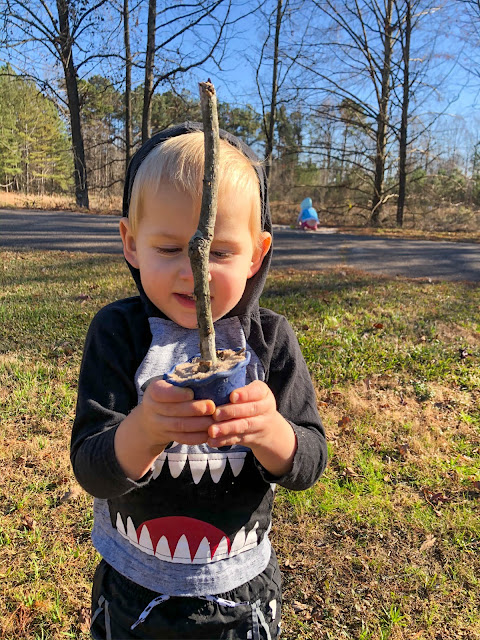 Here he is crying his great, big alligator tears because Zoë was enjoying being the alpha child a little too much. She was bossing him around and not letting him use any toys and that was really hard. 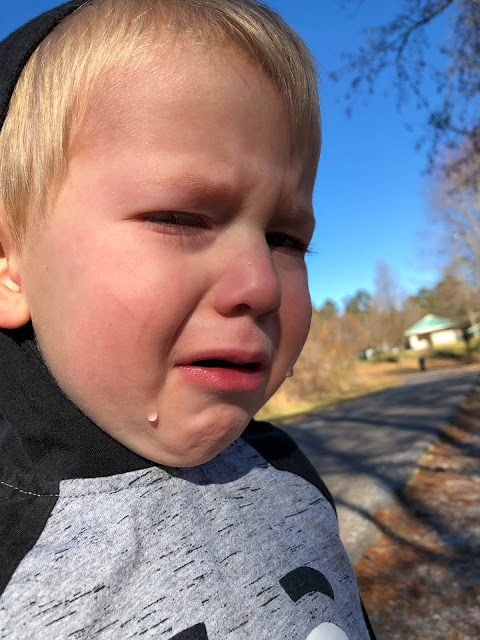 He is the world's wettest crier!
We stuck him in time out a few days ago. I can't remember why because he's honestly usually a very sweet boy. But sometimes he does things that are rather naughty. Like, sometimes he bites people still (usually only when he's very frustrated...but still not okay). Or sometimes he will...I honestly can't think of much that he does besides the occasional bite (he'll tease the cat too much?). But he's a typical child, you know? He does stuff that isn't thought all the way through—stuff that hurts people's feelings (or bodies). He must have done something very naughty to be put in time out because he honestly has only ever had, like, three time outs in his life. I think it was Andrew who sent him to stand in the corner of his office this particular day.
I came to find him because he was howling.
When I walked into the office he rushed into my arms and began blubbering about everything that was wrong with the world. I didn't understand a word he said, but Andrew explained the problem, and I agreed that that behaviour was rather out of line, and he buried his head in my shoulder and weeped and wailed a while longer. My shoulder was rather wet when he was finished.
But what really got us was the wall! The wall had tears running down it on both sides of the corner, with little puddles forming on the floor.
After we wiped Alexander's face clean we had to wipe up the wall, too, and it was just so funny!
Anyway, here he is after I made Zoë give him one (1) sand toy (huge sacrifice on her part, I know (she even kept the blue shovel that started it all)): 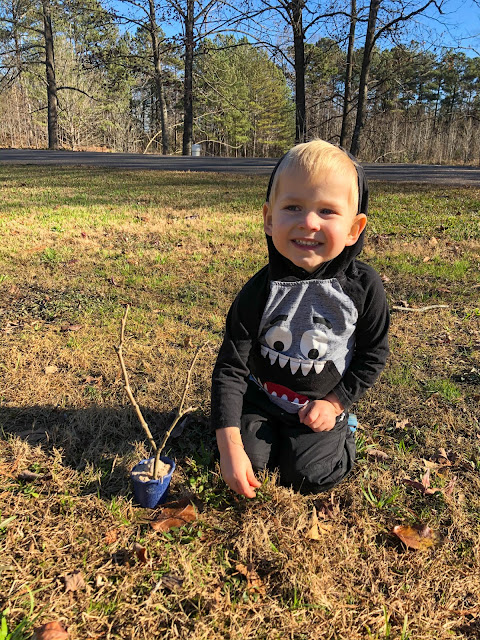 We went on a quick walk around the pond before heading home and the kids found a ladybug (which is a normal activity for December round these parts (the Canadian side of me finds that rather baffling)): 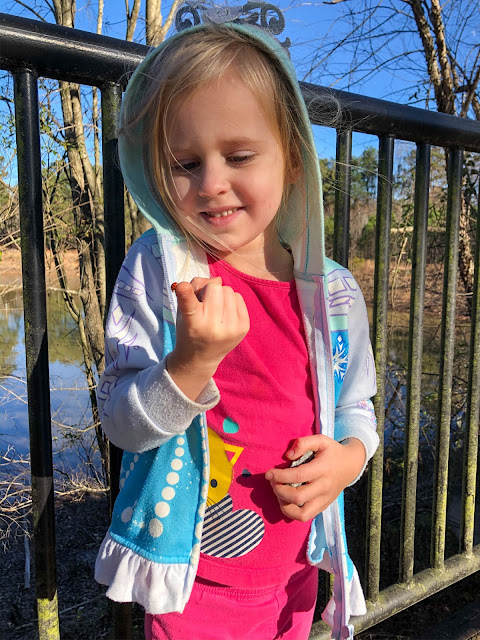 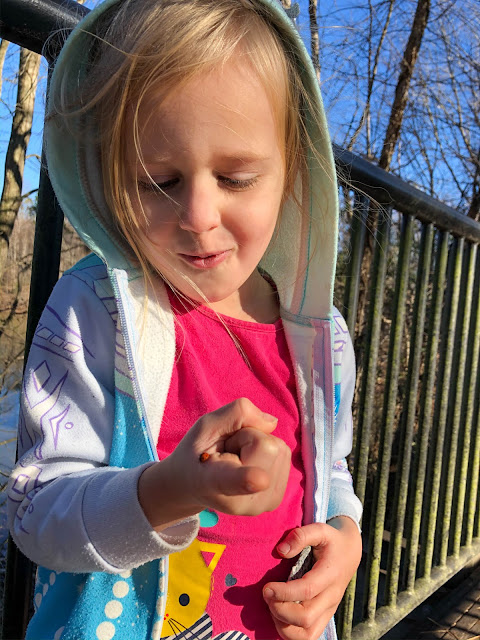 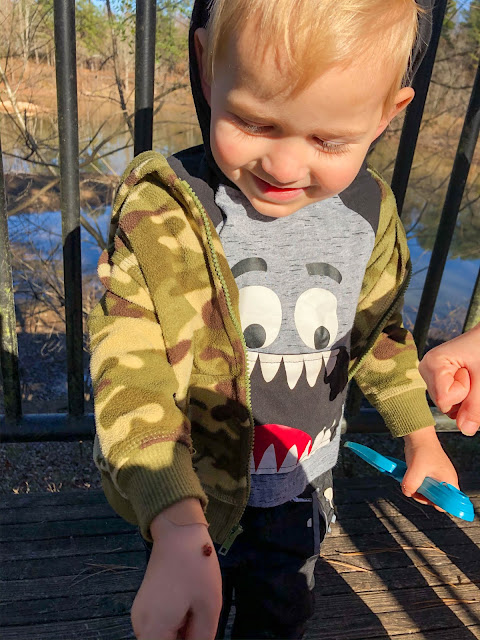 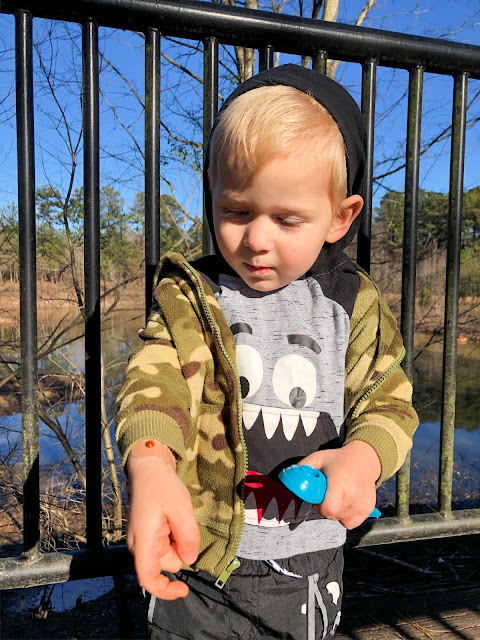 Regarding bugs, I just have to say that one of the best things about winter in the south is the noticeable decrease in bugs. We still have things like mosquitoes and ladybugs (obviously) but so many things are hunkering down for the winter and we just aren't seeing them, which is nice because we have a lot of bugs! So like a lot of people, we have a bug company come spray every once and again, to help keep things under control.
Once when our bug guy was over he started talking about mosquitoes and how he hoped they wouldn't be too bad this year but since we'd only had one good freeze they'd probably be rather numerous. If we get two good freezes that tends to kill them off, but one freeze won't do very much on its own.
And, like, maybe he's right. Maybe the mosquitoes here are a different species (there are 100+ species of mosquitoes in North America) and they're wimpier than the mosquitoes up north. I mean, the trees here still drop their leaves in the fall when it's still, like, 80°F (26°C) out. Canadian trees wouldn't dare drop their leaves at 26°C! And Canadian mosquitoes don't care how many hard freezes try to finish them off—they always come back with a vengeance.
So, we've had one hard freeze so far this winter (I mean, it was below zero (that's Celsius for "freezing") for like a full day). We'll see if we get a second one and if that translates to fewer mosquito bites in the spring...
Posted by Nancy at 1:10 AM