Is anyone starting to get nervous about my Christmas poem? Just me. Okay, good.

I mean, I've been working on it. It's just not finished yet. I should probably do that sometime. Yet, here I sit...not doing it.

Instead I'm going to tell you about our cat. Because clearly that is a higher priority.

Waffelles is, generally speaking, a very gentle kitty. She very rarely scratches or bites and when she does it's usually obvious that either she (a) was trying to play and got a little too rough or (b) the kids were annoying the snot out of her and would not follow her less-violent cues. But, really she's very patient and gentle.

Case in point, here are a few pictures of Alexander hand-feeding her this morning: 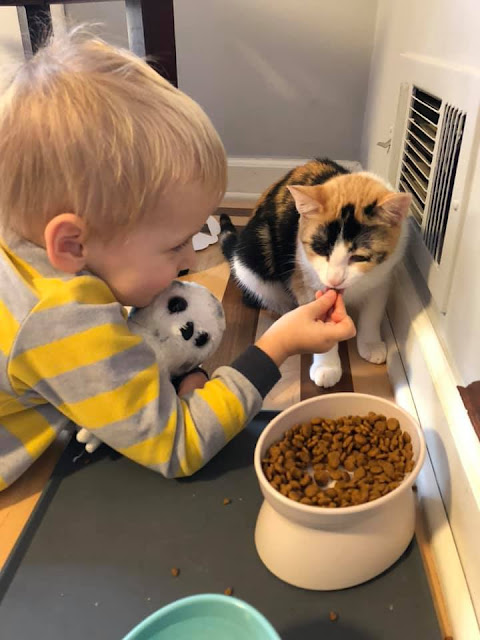 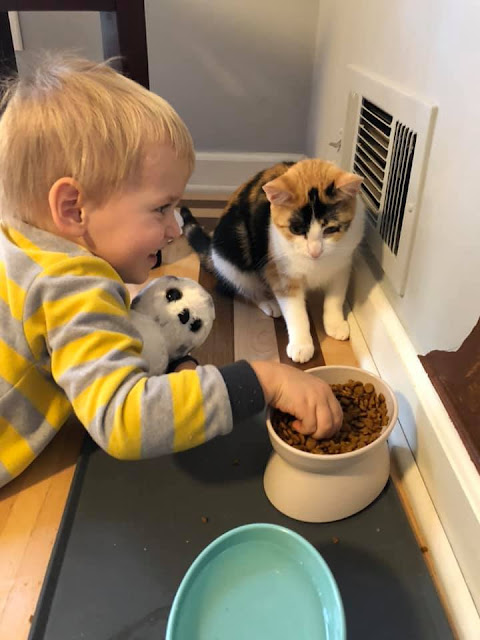 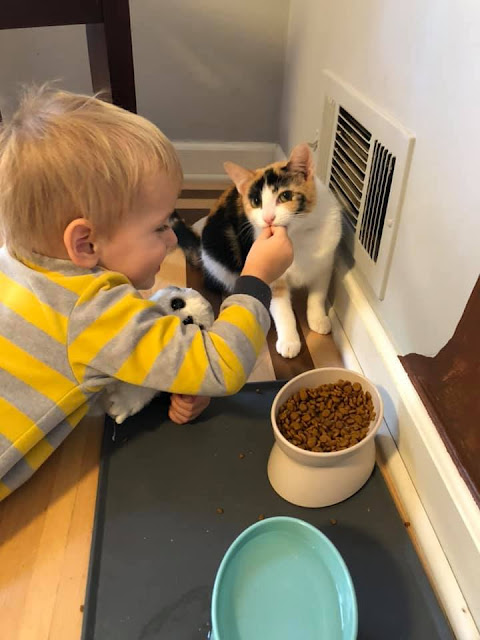 He does this on a regular basis. And she tolerates it on a regular basis. It doesn't seem to bother her at all and he's not the teensiest bit scared of getting his finger bitten off because she hasn't ever bit him (and he's been doing this for months).
However, she does have a few rambunctious behaviours (she is a kitten, after all, and a once-stray kitten at that). When we first got her she would guard the bottom of the stairs and would threaten to attack the feet of anyone who came down them. For months no one could go down the stairs unless they were armed with a distraction—a hair elastic to shoot across the room or a ball of paper to toss or whatever. She's mostly given up this behaviour, though, and no longer terrorizes the kids in this way.
But she still hunts them. Just the littlest two, really. I think she thinks they're just really big kittens? I don't know. But she definitely instigates running battles with them. She chases them around the house. They chase her around the house. She'll stalk them and then pounce at them but doesn't ever actually land on them. I think she just does it to show them that she could do it if she wanted to. And also to hear them scream. She likes to make the kids scream.
She will also attack Miriam for this reason. Miriam is a screamer.
(Rachel is her favourite human, though she probably spends the most time sitting in Daddy's office staring out the window (coincidentally, that is the one room of the house that is more or less "off limits" during the children's waking hours (and sleeping hours, too, I guess)).
Benjamin doesn't often get attacked by her (and by "attacked" I mean "playfully attacked" because she's only drawn blood a handful of times) and I think it's because he doesn't scream. He's often the one to grab her when she's getting too hyper—he'll just put his arm out and she'll latch onto it with all of her little paws and gently gnaw at him with her teeth while he carries her to the basement for a kitty timeout. But it absolutely doesn't bother him when she "attacks" him like this, so she usually...doesn't.
As much as Waffelles seems to instigate—and enjoy—the screaming and running around the house cycle, she also seems a little leery of the younger, more rambunctious children. She's really been a lot calmer since getting fixed. She sleeps a whole lot more than she ever did prior to getting fixed and she seems to crave more cuddle time, which is strange after having her be a room-where-it-happens cat. As much as she's wanted to be wherever the action is, she's always been a little stand-off-ish—a look but don't touch cat.
But the other night Miriam had her primary graduation/temple preview night, so we sent the three little ones into the basement to play and they played so nicely and so quietly. We hardly knew they were there. Miriam, Rachel, and I sat on the little blue couch and Andrew sat on a chair behind us while we zoomed into the meeting. Waffelles surprised me by coming up to us, sniffing our toes, and then hopping up to lie across our laps. She spread herself out, kneading our laps with her paws while we stroked her all over and she purred and purred and purred like I've never heard her purr before.
As soon as the kids came clomping up the stairs, however, she stopped purring, sat upright, and then bolted from the room to hide.
So I have hopes that she will one day be a snuggly kitty. I think she's just constantly nervous about what the kids are going to do to her and I honestly can't blame her for that (though at the same time, big same for them, kitty—you're a bit of a wild card, yourself).
Posted by Nancy at 12:29 AM