Soon after I pulled out our collection of Christmas stories, Zoë and Alexander sat down together to write stories of their own. 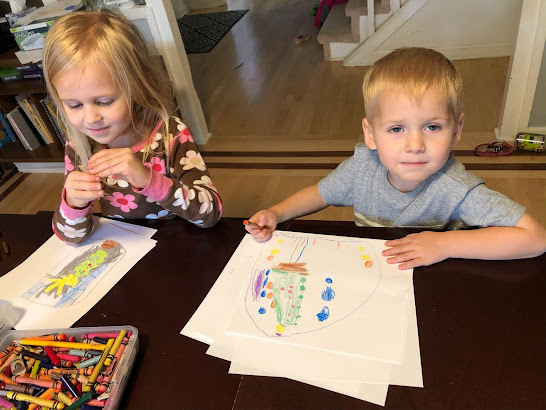 They made their covers first. Alexander copied Zoë the best he could. Here is Zoë's cover: 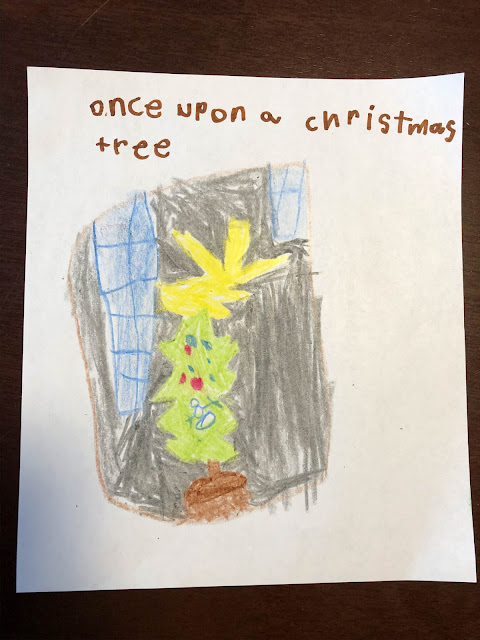 And here is Alexander's version of the same thing: 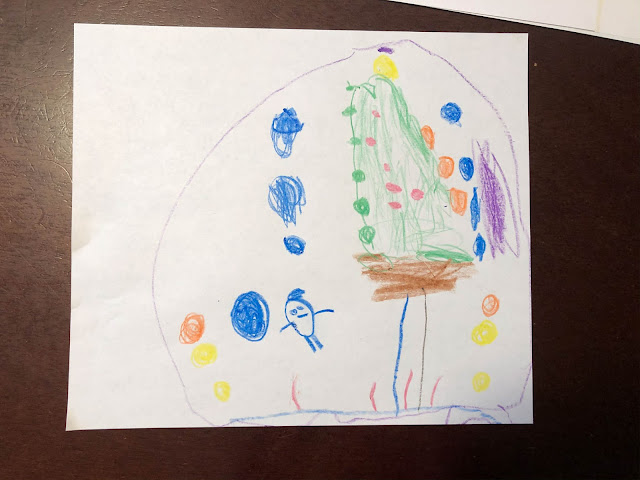 Their stories began very similarly as well, but turned out vastly different. Alexander finished writing his story before Zoë did and then...I don't know if she got tired of writing or what but her story rather abruptly ended. And while everyone in Alexander's story got whatever they wanted, in Zoë's story her main character was left pining after what it most desires. We can only imagine it eventually learns to be happy with its lot in life.
While the key plot points of Alexander's have more or less stayed the same each time he reads it (he knows what part of his binomial code is the English alphabet and which part of his binomial code is Spanish numbers), it tends to be a little fluid. My best offering of his story is this script of the video:
Me: Can you read it to us, Alex?
Alexander: Yup.
Me: Are you going to start at the end or the beginning?
Alexander: The bedinning.
Zoë: Bedinning?
Me: Mmmhmm.
Alexander: Once upon a time there was a snowman who wanted to be a human. And every time it waited it began to be a human.
Zoë: Turn the page.
Alexander: A-B-V-D-E-F-G-H-I-J-K
Zoë: It's all kinds of stories.
Alexander: E-F-G-H-I-J-K-Tell'em-N-O-P-Q-R-Eh-T-U-P. Now I know my mine A-B-V. Won't you vwing wif me? And then... Uno, dos, tres, fwatro, finto, fain, fiete, nuebe, diez. Nuebe diez. Nuebe. And then turn the page.
Zoë: You skipped two pages.
Alexander: Oh.
Zoë: *incoherent*
Alexander: And every time a mih-muh [Christmas] tree waited, it began to grow up high into the sky. And then pew bad guys. The end.
Me: Very nice, baby.
Alexander: Thank you.
Zoë's story, on the other hand, is written down word for word, so I can simply transcribe her story for you.
Once upon a time a little tree wanted to be a Christmas tree. Because every winter before Christmas she saw Christmas trees in every window of every house. But not her. And every time she waited and waited, but nothing happened. And that little tree felt sad. The end.
I think (though I can't be certain) that we have a little realist on our hands. She knows that life is full of disappointment and that you may as well get used to it. Or you'll end up feeling sad. Like the Christmas tree in her story.
I tried to encourage her to expand her story, rework the ending, tie up some loose ends, give the tree some happiness.
"Sometimes you just don't get what you want," she wisely said.
I hope she remembers that on Christmas morning...
Posted by Nancy at 10:48 PM