Prescriptivism vs. creativity, or Joseph vs. the sheep

I spent several hours this week preparing little craft kits for my primary activity girls. We have one more activity this year and then all of our 11-year-olds will be heading into the Young Women program, so I had Andrew deliver the kits to my girls with a little print that I made (of a wood block carving that Rachel did of the nativity) with a note for each of them. I did not include instructions for the craft, but I did email the parents that we'd be meeting together next week to put the craft kits together...

One of my girls got rather excited about things and put the craft together on her own and I was blown away with how she pieced it together. The craft kit was, I thought, rather puzzling, so I didn't expect the kids to try putting them together on their own (my own kids thought the figures of Mary and Joseph were keyholes), but this little girl found a way to use every piece and I'm just so impressed with her creativity!

Here's how my model project turned out (which itself deviates from the original idea): 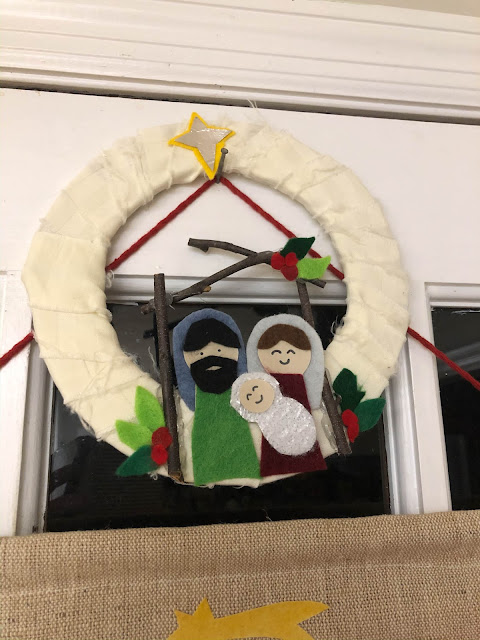 And here's what my sweet little friend sent me: 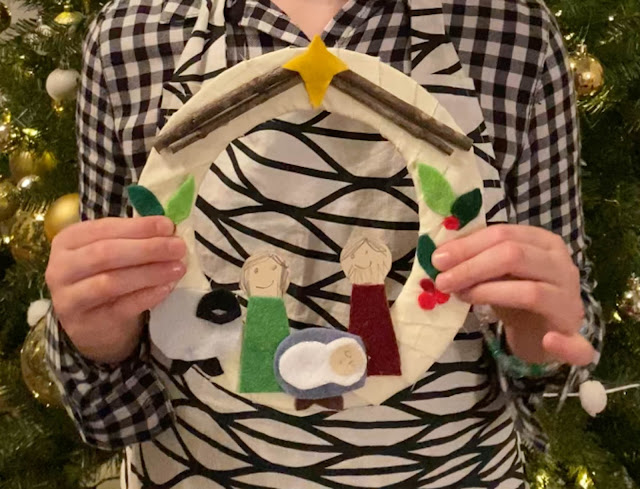 She turned Mary's hair and Joseph's headdress into a manger and Mary's headscarf and Joseph's hair and beard into a sheep! I was looking and looking at the project, wondering, "Where did she get a sheep...?" and was just so impressed when I figured it out. She had sent me a little video of her saying thank you and the project was kind of dancing around in her hands so I had pause the video and zoom in—enhance!—before I realized what she'd done. Incredible! The ingenuity of it!
This is a project I was a little worried was too prescriptive because I could really only see one way to put the pieces together, so I was very pleased to learn that it was perhaps not quite as prescriptive as I thought.
Earlier today (before I received this charming picture), I was thinking today about an art project I made in kindergarten. We had to trace and cut out a series of circles in order to make a snowman. So I did, but I cut inside the line so that my circles would be pure white (because whoever heard of a snowman with a black outline?!) and they ended up a little bit...wibbly-wobbly. My teacher was not impressed and she pulled me aside to show me how everyone else had managed to cut lovely, smooth circles while my snowman looked rather crudely rolled and would be a bit of an embarrassment in the hallway, hanging next to all these pristine snowmen.
Was this where my perfectionism began? I don't know.

But I do know that (1) I could cut well enough when we did that project; it just was hard to cut inside rather than outside/on the line and (2) snowmen absolutely don't have black outlines and more often than not are formed from lumpy, lopsided, crudely-rolled balls of snow. If point #2 is not true in your experience then it's also possible that (3) I am not very good at building snowmen, but that is neither here nor there.

My snowman did look like I wasn't quite meeting my kindergarten milestones (when compared to everyone else), but I just remember wondering how my teacher couldn't understand the aesthetic I was going for. On the other hand, she couldn't appreciate what I'd done because I hadn't met her aesthetic. It was all a terrible misunderstanding and I'm sure I cried about it and apologized and then redid the assignment to meet my teacher's standard because that's how I roll.

When my sister Josie was in elementary school, I went to volunteer in her classroom (what grade was it?! I'm thinking grade one, just right after we moved to the states...but then why would I be helping in her classroom and not at school myself? Maybe I volunteered after school for me but before school got out for her? That is the only scenario that kind of makes sense in my brain). They were making little "bookworm" pictures from precut pieces the teacher had handed out. Most of the kids followed the directions precisely. Juicy red apple, smiling worm crawling out, two little googly eyes on the top of its head...

Josie did not follow directions. Josie was feeling rather miffed.

Her teacher smiled sweetly, like she always did (but also she always struck me as a woman of very little patience so in spite of her smile her words would come out sounding extremely patronizing, if not scathing).

"Because it's a bookworm and it can't really read if it doesn't have eyes, can it?"

A storm swept over Josie's countenance.

I gave her shoulder a comforting pat and then people-pleasing me said, "Just...put the eyes on..."

So Josie compromised. She angrily picked up one extra large googly eye and glued it smack dab in the middle of her worm's face creating a horrifying cyclops bookworm thing. When her teacher walked past Josie's desk she did a double take.

"What is that?" her teacher asked.

Josie continued to methodically scribble her apple, threatening to break the prescribed red crayon in half with each angry stroke.

They locked eyes and glowered at each other for several long seconds.

"I gave it an eye," Josie finally said and her teacher huffed away while I giggled to myself. After all, I'd spent the previous 2.5 years taking care of Josie day in and day out and was pretty familiar with her temperament.*

Needless to say it ended up being a pretty rough year for both Josie and her teacher.

The importance of individuality and creativity cannot be understated (no matter how much the teacher might want to end up with a darling row of perfectly executed projects).

And I still cannot get over that sweet little sheep!

* I'm realizing now that Rachel is the same age that I was when I started homeschooling (well, she's a year older than me, technically) and that my mom would leave me to watch Josie all day while she was at work (and Alexander was the same age that Josie was when I started watching her). And that's just wild. I'm trying to imagine doing this myself and...I can't. But that might be because I've been a stay-at-home mom for Rachel's entire lifetime. Or it could be because I can't imagine leaving the house for any purpose at all, ever (hi, COVID). At any rate, I can tell you that Josie was a passionate toddler who turned into a passionate child who has grown into a passionate person.

If she felt the urge to go to the playground or the lake, that's what she would do. I honestly can't tell you how many times I phoned up my mom at work to tearfully admit that Josie had disappeared again! And my mom would quickly drive across town to help me look for her (she was usually at the playground or on her way to the lake).

If she wanted to make a cyclops worm then...that was exactly what she was going to do.

That same passion can be seen in the way she learned the hand sonic and toured around the world with BYU Young Ambassadors, in her intricate and amazing pysanky, in how many BLM marches she's attended, in her little rescue kitties. She's amazing and I'm so grateful for the time I got to spend with her when she was little (even if it turned me into an oppressively bossy sister) because we really didn't get to spend a lot of time living in the same house. She taught me about passion and about individuality and I'm so grateful for her.