Yesterday Rachel made some lovely gingerbread cookies and after church today she whipped up some colour flow icing while Andrew helped the other kids with some graham cracker houses. 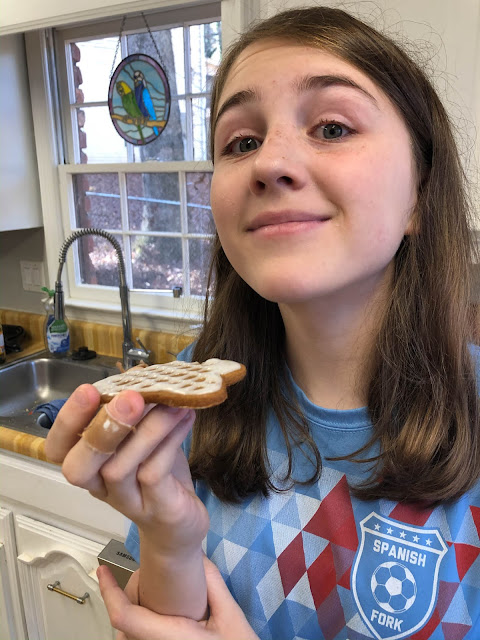 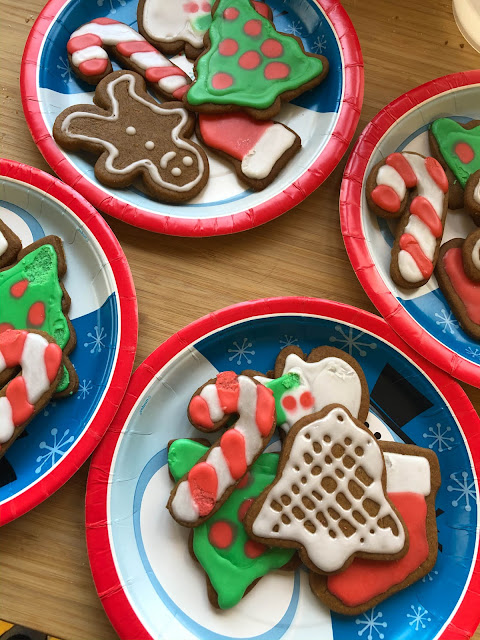 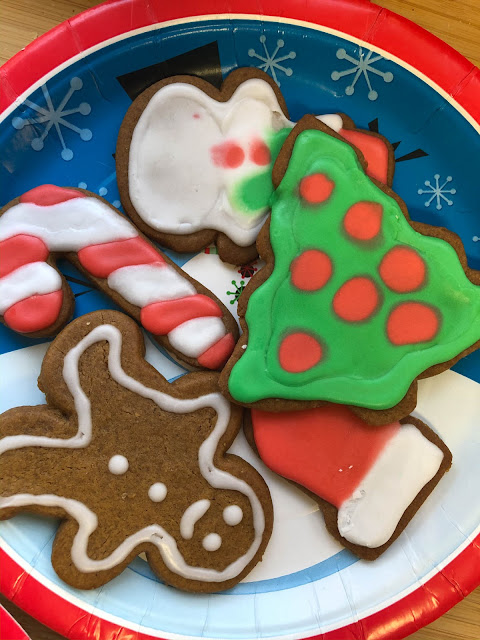 She even had time to jump in and decorate a house at the end. I'll photograph the finished results later (after the girls create their masterpiece; they spent most of the afternoon coming up with a blueprint for a real gingerbread house).

Here are some pictures of the kids working on their houses: 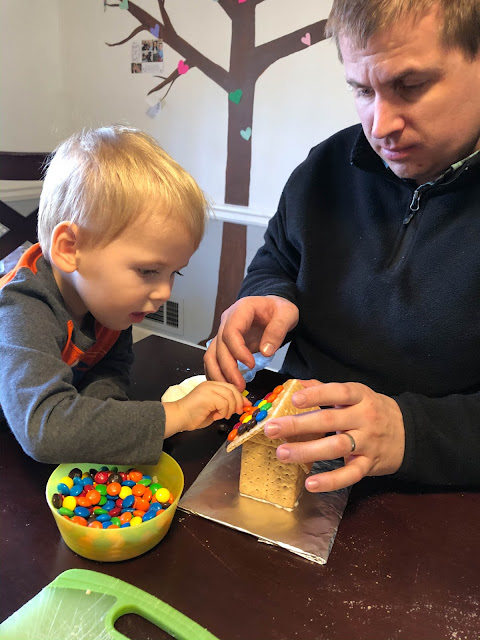 Zoë and Alexander needed quite a bit of help, but they were pretty patient while they waited (with their cheeks bursting with candy). 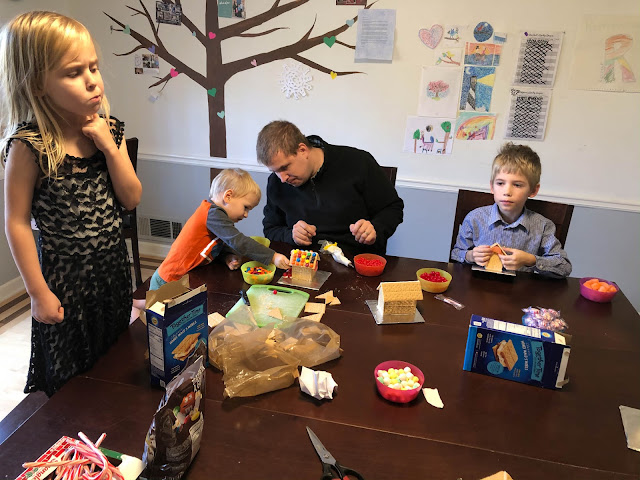 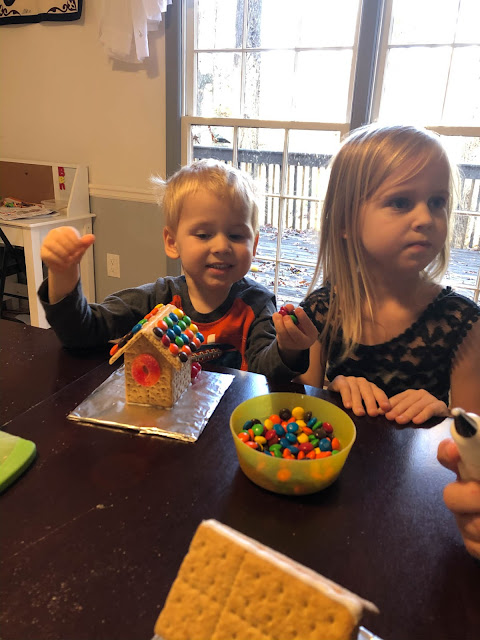 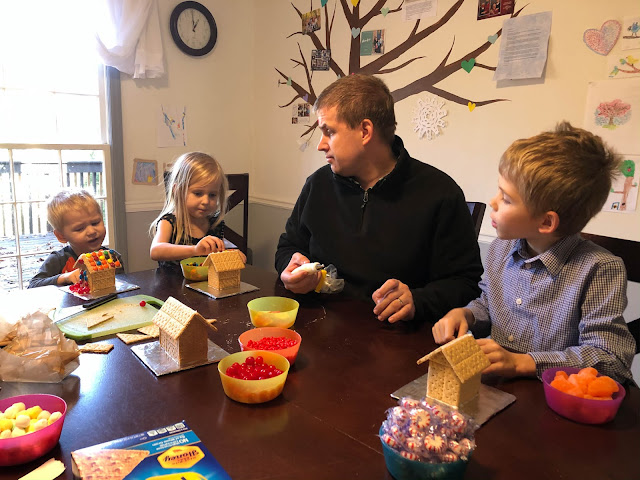 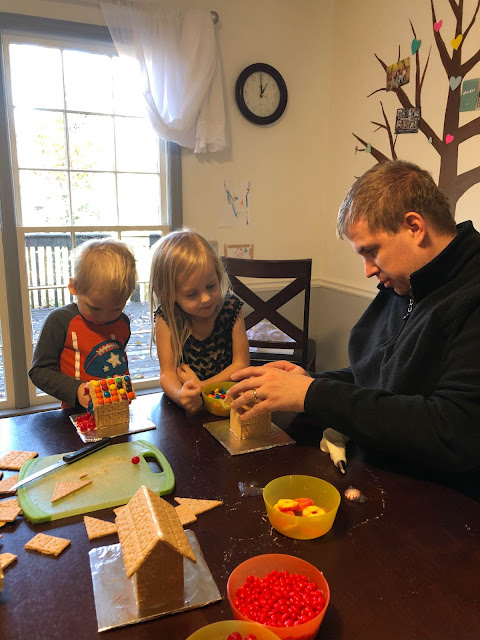 Zoë was very proud of the pattern she made on her roof: 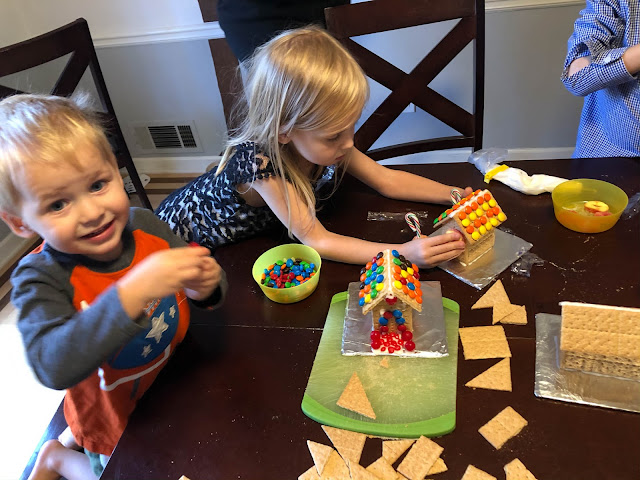 She ran out of yellow M&Ms at the end and stuck a few green ones on when I couldn't find the extra M&Ms, but she picked off the green ones and replaced them when we found the bag. 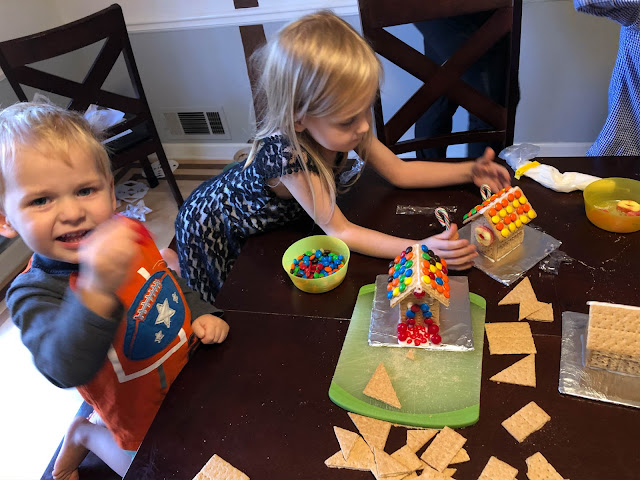 It was literally right there in the middle of the table (but in my defense, most of the "extra" candy was sitting on the kitchen counter). 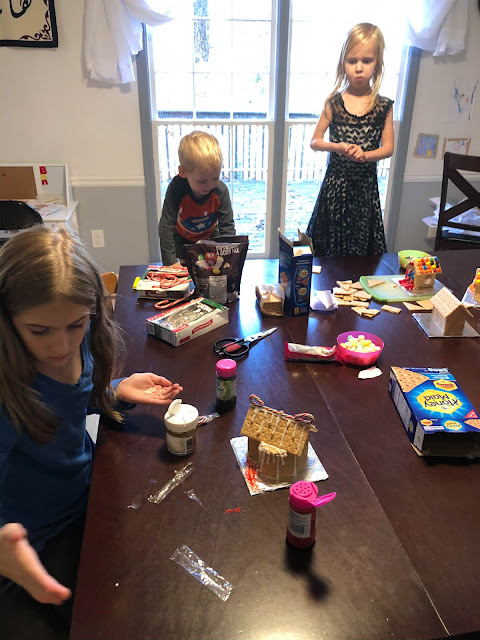 Here's Benjamin working on his house, which ended up being quite the dramatic scene. He had a man about to fall off the roof (named Bill), a man who fell in the snow and landed upside-down buried halfway in a snowbank (named Bob), with a man (named John) looking on. Festive. 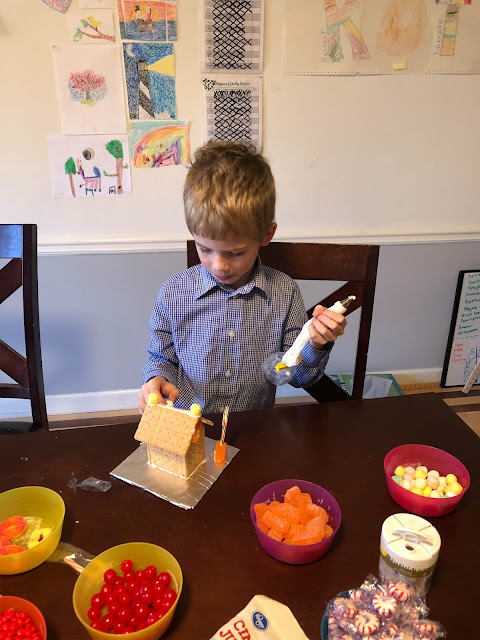 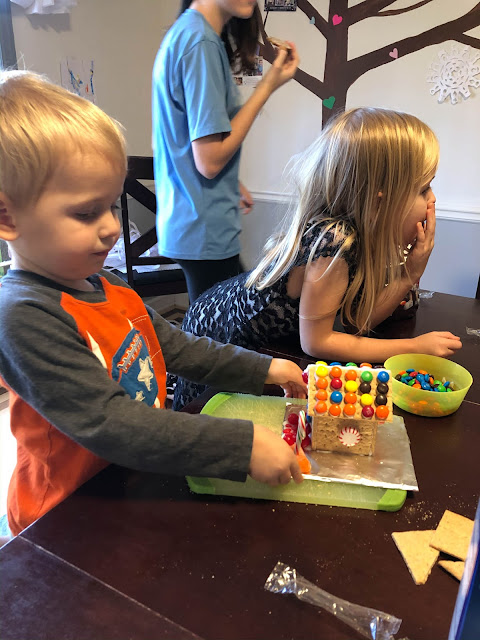 This is a picture of Benjamin's house before things got all dramatic... 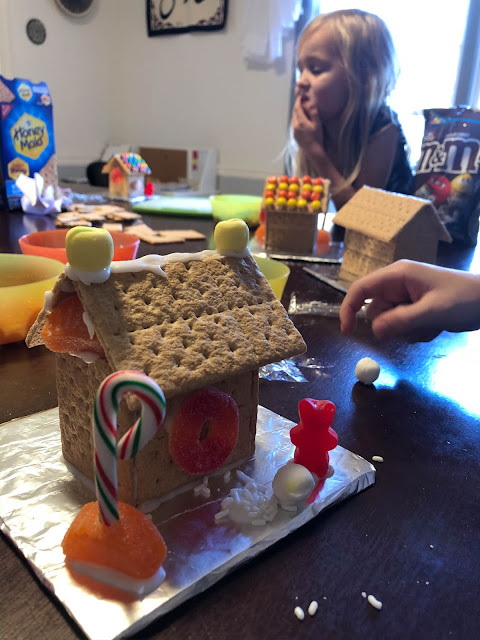 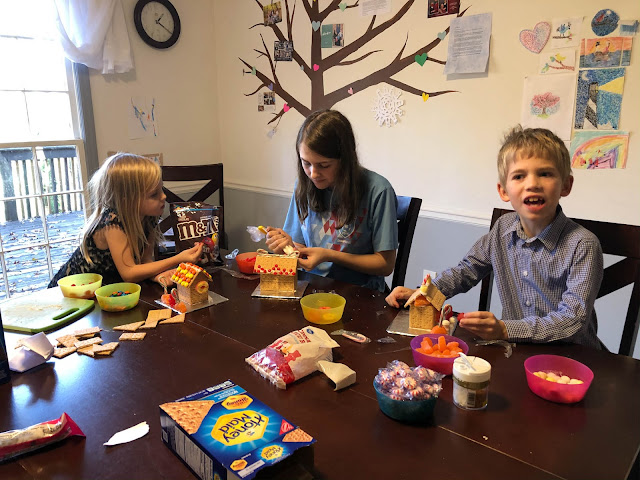 Here's Miriam with the bay window she fashioned for her house (she loves bay windows, which is a totally normal thing for an 11-year-old to love): 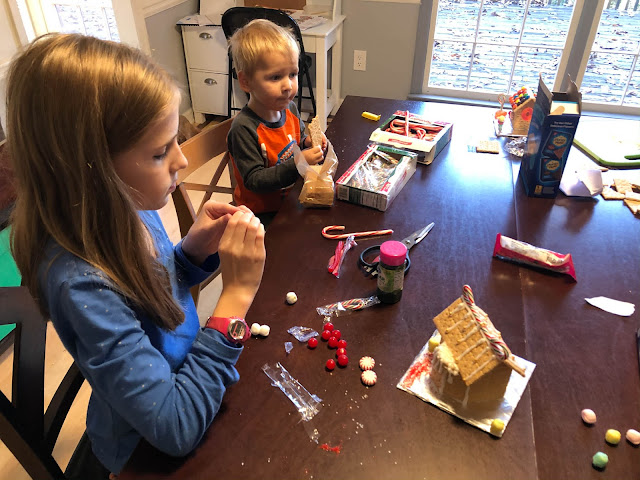 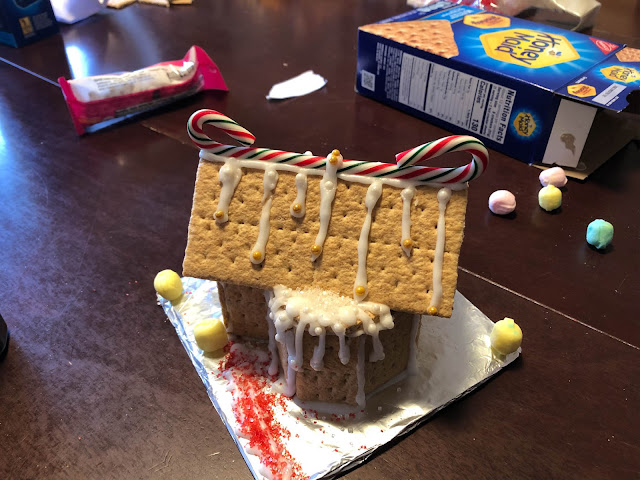 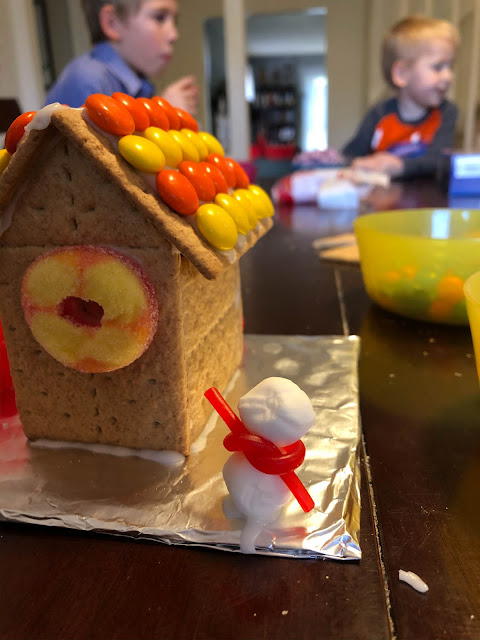 And a view of the boys shoveling candy into their faces: 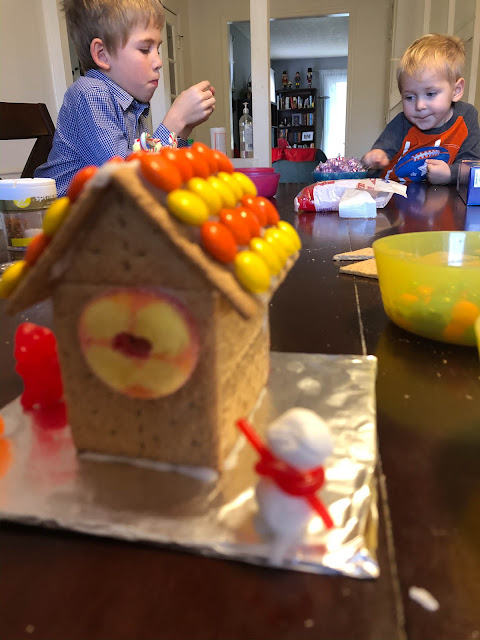 I left the kids and Andrew finishing up while I started talking with my family; Alexander was already mostly finished so he came to join me. I prompted him to tell my dad happy birthday, so he squealed, "Happy Birthday, Bumpa! Today is your birthday!!!"
"Well, tomorrow is his birthday," I said.
Alexander turned to me with his mouth hanging open in disgust.
"What?!" he said. "Then why did you tell me to say Happy Birthday!? We can't say Happy Birthday when it's nobody's birthday!"
He was quite upset with me for prompting him to say crazy things like "Happy Birthday!"
Later the kids were bugging me about being hungry after eating a cheese stick for a snack, so I told them they could have some oranges. We just picked up some Christmas oranges the other day so we had plenty of oranges around. Soon Alexander came back to me with his cheeks bulging.
"No, no!" I said. "Finish chewing at the table. You're going to get juice all over the place."
He adjusted the contents of his cheeks so he could talk better.
"Not juicy."
"Not juicy?" I asked. "What's in there? Candy!?!"
He smiled his cutest little smile and said, "Candy oranges."
******
Before dinner we loaded up our red wagon with plates full of cookies, buckled the xylophone to the seats (this is a perfectly normal thing to do), grabbed our ukuleles and jingle bells (as one does), and hit the road to do some caroling to the neighbours.
I'm honestly not sure how many neighbours enjoyed it...and how many afternoon naps we ruined (we even pulled a couple of neighbours out of their bathtub (technically their parents pulled them from the bathtub and wrapped them in towels so they could listen while we finished our song))...but the kids had fun. And a few neighbours for sure appreciated our efforts (there is a new five-year-old girl next door and a six-year-old girl down the street and let's just say that those girls and Zoë are really itching to form a friendship...and yet...here we are...in the middle of a global pandemic).
Our last house was the home of our Christmas Tree Lady, who invited us in to look at her Christmas trees again. We politely declined, because of the virus, of course (we were very careful, leaving our plates on the doorway, ringing the bell, and then singing from a very safe distance). But it was lovely to get to chat with her for a few minutes. I hope it helped alleviate some of the loneliness I know many are facing right now (probably especially our senior citizen neighbours who are living alone).
As we learned in Elf School, "The best way to spread Christmas cheer is singing loud for all to hear."

*******
We watched The Santa Clause yesterday and then Zoë put on a Santa hat and was walking around pretending that she was an elf. I was sending my friends a Marco Polo when she walked into the room and so I panned over to her and said, "And here's Zoë the Elf!"
She ripped the hat off her head and stormed out of the room.
Later, when we were settling in for some story time, she said, "Mom, why would you tell your friends that I was an elf? Just like...I can't even understand why you would say that about me."
"I'm sorry."
"I just...Mom..." Zoë shook her head with either disappointment or complete bewilderment at my behaviour. "How would you even birth an elf? Like...I'm not an elf, okay?"
So I had to send my friends a follow-up message to inform them that Zoë is not an elf (which they totally wouldn't have known otherwise).
*******
And another thing!
Zoë leaned over to me randomly at some point today and said, "Did you know that Christmas is Jesus's birthday?! Because it is! Isn't that neat? I read about it in one of the Christmas books you put out and just...who knew?"
"You...didn't know Christmas is celebrating Jesus's birthday?" I asked, thinking back about all the songs we've been learning about Jesus's birth and about all the nativities we set up and about our daily Christmas devotionals with scriptures and stories about Jesus and... "What did you think Christmas was about?"
"I don't know," she said. "I thought it was...a time to share...a time to care...a time for giving gifts.* I did not know it was about Jesus!"
I'm glad we got that cleared up!
*Quoting from one of the songs we've been learning.
Posted by Nancy at 12:46 AM