The other day Alexander looked at Miriam and said, "Tan I touch your bray-uh?"

But then he kind of chickened out. Still, it was such a funny request that we made the kids pose for a picture before bed last night—everyone with their finger reaching out to touch Miriam's braces—on her last night with braces. 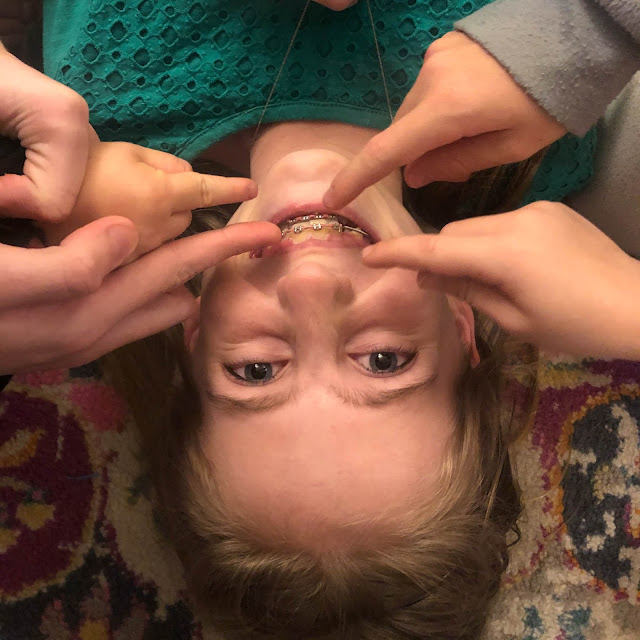 She's been in braces for quite a long time! She had her first orthodontist appointment in September of 2018; she had a palate expander placed, though we can't quite remember when the braces themselves went on but whatever way you slice it she has had gear in her mouth for a long time. It was supposed to be 18 months but then we moved and had to find a new orthodontist and then a surprise tooth came in (one that we though she was missing, so it's a good thing) and then COVID happened and she just ended up being months and months behind in this process. So she finally, finally got her braces removed today.

(All of a sudden, in this picture, she's reminding me of my cousin's daughter Lexi a little bit). 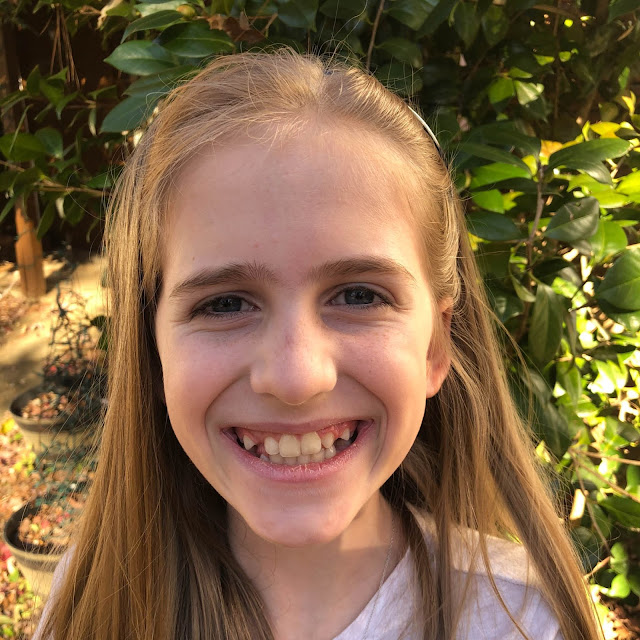 Her teeth still aren't perfect and we know she'll be getting round two in the future, but I'm happy to see her smiling so beautifully and confidently. And she is glad she won't be stuck in braces until she's an adult (seriously—when I asked our dentist for recommendations he said he'd recommend keeping her in braces until she was an adult and I was like, "Ummm...keep her in braces from age 9 to age 18? I don't think so." This was never the plan. The plan was 18 months now, and round two later. So I started calling around to orthodontists on my own and they all agreed that there was absolutely no reason to simply leave her in braces for her entire childhood).

The orthodontist gave her a bag of once-contraband food items when she left—popcorn, bubble gum, a chocolate bar with nuts in it, etc. Oh, and a retainer (which she has to wear for 12 hours a day).

I have a hunch Benjamin will be next in the orthodontist's chair...he's not looking forward to it.