I'm trying really hard to not be sad that we filmed our entire recital on "grid" mode...so instead of a beautiful full-picture view of our recital we captured everything. It's fun, I suppose, that we'll get to watch our audience's reaction (since we couldn't see them from where we were performing) but...it's simply not the finished product I'd hoped for.

Luckily we filmed our "dress rehearsal" this afternoon, so we have that.

I'm still not pleased that I'm still half in pyjamas (dress rehearsal, Nancy, come on!) and there were a few other mishaps that we ironed out before the recital (as well as a few that we did not manage to iron out (and even then we managed to add some new mishaps to the recital because we are nothing if ingenious)), but...it's better than the video we got from the recital so I'm glad we have it.

If we try this again in the future (and we probably will—even after the pandemic is over (it's going to be over at some point, right?!)—because we live far away from our loved ones and they tend to miss out on this sort of thing) we'll do a lot of things differently. Like, for example, we realized that we probably should have simply streamed our concert on YouTube and then met up with people in a Zoom call after...or something. But, live and learn, right?

We had a sizable crowd show up, with friends and family tuning in from Idaho, Hawaii, Ontario, British Columbia, Utah, Illinois, Alberta, Georgia, California. Even our next-door neighbours "came"! 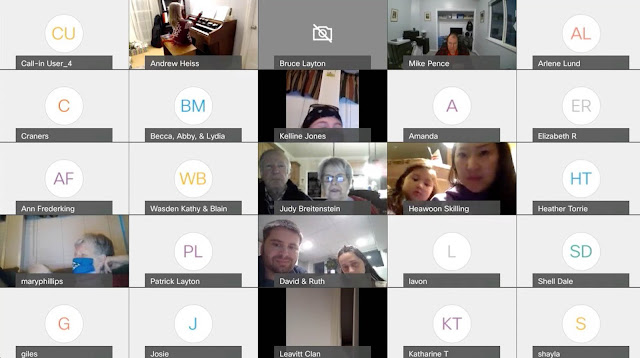 Zoë introduces herself saying this:

"I’m Zoë and I started piano lessons in May. Today I am going to play Good King Wenceslas, Jolly Old St. Nicholas, Jingle Bells, We Three Kings of Orient Are, Up on the Housetop, Hark! The Herald Angels Sing, and The First Noël. I wanted to play even more songs but my mom said I couldn’t. My favourite piece is The First Noël because Noël means Christmas and the E has two dots above it just like in my name! I also like it because it sounds beautiful."

The older kids had to do some research on one of their chosen songs/composers. Here's what Benjamin had to say:

"I’m Benjamin and I am going to play Deck the Halls, Silent Night, and O Come All Ye Faithful. My favourite piece is Deck the Halls because it’s a traditional Welsh Christmas tune. The lyrics were written by Thomas Oliphant, a Scotsman, with the  fa-la-la-la line mimicking the madrigals of the 16th and 17th century. "

"I burned the fingers on my left hand by picking up a pan that I didn’t know was still hot, so I am being very brave by playing today."

I really wish that we had gotten a good video of Zoë singing during the recital because for more than one song she was closing her eyes and belting out the lyrics. She likes to close her eyes while she does things to prove that she's doing them from memory (she will often insist on showing people how she can play her piano songs with her eyes closed as well). Her singing was very cute and very funny (I almost started laughing when I saw her squeezing her eyes shut), but this eyes-open recording will have to do.
Miriam was up next and she introduced herself saying something like this (but not exactly like this because she decided she should explain a few more things before the recital):

"My name is Miriam. I have been taking music lessons for several years now. I’d like to thank my teachers: Heawon Jun, Nora Hess, Linda Giles, my mom, and many others. The pieces that I will be playing are one, Edelweiss from The Sound of Music with a key change that I was assigned to figure out on my own, a hymn medley that I put together myself along with all of the transitions, and Grand Jeu et Duo by French organist Louis-Claude Daquin."
"Louis-Claude Daquin was born on July 4, 1694. He originated from the town of Aquino in Italy when his Great-Grandfather converted to Catholicism from Judaism, taking on the name D’aquino, or Of Aquino, or the more French version of it, Daquin. When he was young his family noticed his great interest in music, so as a child he took harpsichord lessons from Elisabeth-Claude Jaquet de la Guerre, who was another pivotal musician in French society, and his godmother. He died in 1772, from either unknown or unrecorded causes. One of the collections that he wrote included 12 Christmas Noels. I will be playing the tenth one, Noel X, or Grand Jeu et Duo."
"As Louis-Sebastien Mercier once said, "'There have been organists, but Daquin is Daquin.'"
Here she is playing Edelweiss:
And here she is playing the medley she put together:
And, finally, here she is playing Noel X:
D'aquin is now one of Miriam's musical heroes. She loves everything he's ever written.
She wrote an essay on him a few weeks ago, even contacted a university music librarian to help her find more information about him when she wasn't able to find much online. I mean, it helps that my mom was the university music librarian she contacted. But still!
It was quite a lot of work for the kids (and me, if we're being honest) to put together this recital, so I was happy to see so many people "come out" to support them. I think it was good for them to have to play through their nerves, something they haven't been required to do for months. Miriam used to play prelude at church every week but...lately she's just been playing for us. It was good to play for someone else for a change!

Thank you to everyone who watched! It was lovely to "see" you!
(And just so I don't forget, here's our set up from this evening (this was after I fed the little ones banana bread and sent them downstairs to play for a few minutes; Miriam's pieces are a little long for them to sit through and the microphone was a little too sensitive to their childhood wiggling)): 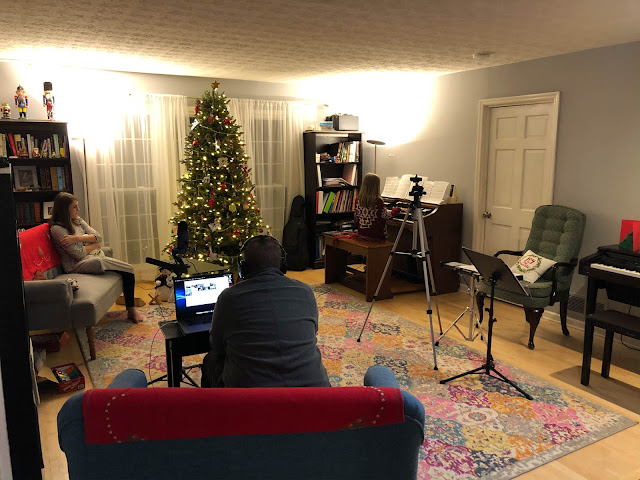