For family night we talked about Hanukkah and played dreidel. We started "lighting" our menorah a few days ago and the kids asked what Hanukkah was all about and we...couldn't quite tell them. Something about Assyrians and the temple and oil...but...the story was too hazy to recount. So I told the kids that they should do some research and that I would do some research and then we'd talk about it later.

I was pleasantly surprised to learn that Miriam and Rachel had done their research! So when I tried to tell the story this evening they jumped in and fairly accurately narrated the story of the Maccabees. In the end, when they won the war and were able to reenter their temple, they found that it had been desecrated (and dedicated to Zeus), so they wanted to rededicate the temple but only had oil for the menorah for a single night. They decided to use it anyway and it kept burning for a miraculous eight days (or perhaps they simply had an eight-day celebration). 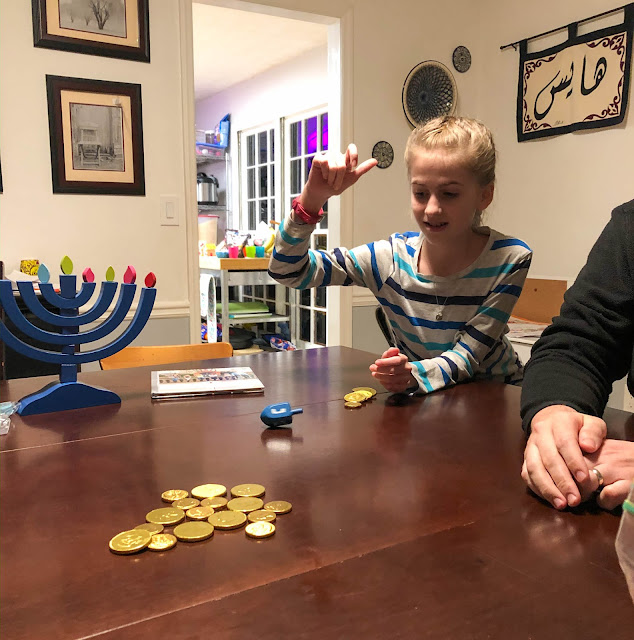 Andrew has Jewish ancestry—from Eišiškės, Lithuania—though his direct ancestors immigrated to the United States by the early 1900s and his family line has been with the Church of Jesus Christ of Latter-day Saints several generations now. But still, we think it's important to connect with that bit of our family tree. We also think it's important to be aware of the whys and hows of holidays different from our own, even if we don't get all the details quite right. After all, our Jewish friends can sing the words to "The Twelve Days of Christmas" and know all about Santa and Baby Jesus and the cursed Elf on the Shelf. Shouldn't we at least try to reciprocate and be somewhat aware of what their holidays are about and why they're important?

Benjamin was our champion spinner. This is his I-think-I'm-on-fire-but-I'm-trying-to-be-modest face: 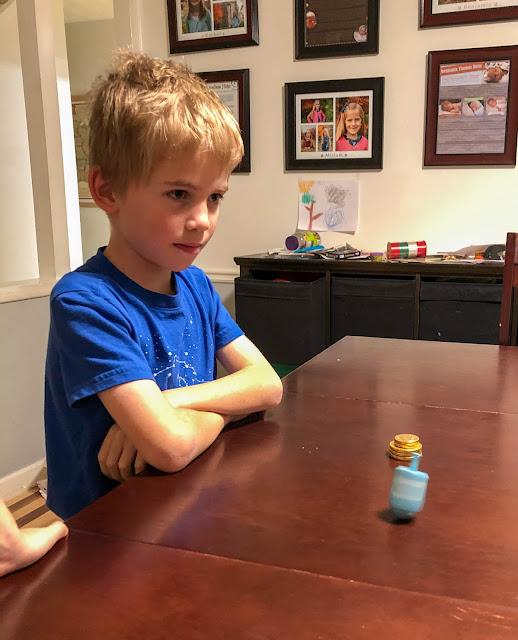 I should explain that when I say he was our champion spinner I simply mean that his dreidel spun for a very long time. Miriam was our other champion spinner in that she spun the most "winning" spins and ended up completely winning the game. 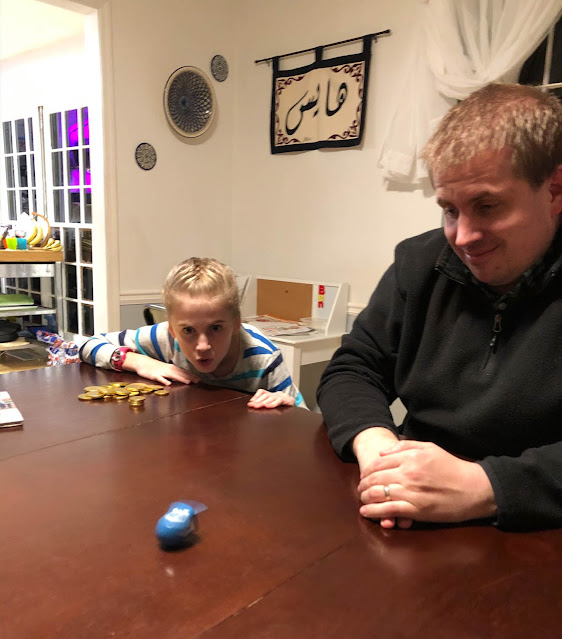 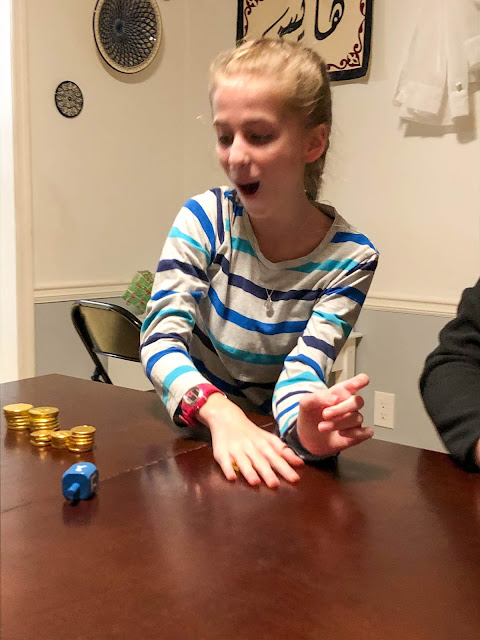 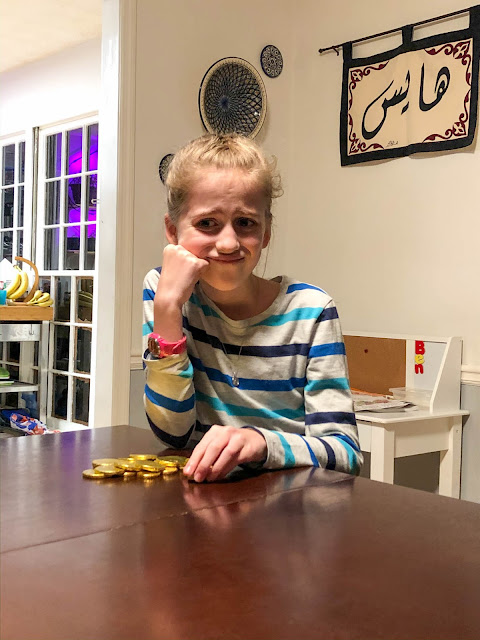 I've just noticed that Miriam and Benjamin are both in somewhat desperate need of new pants. They both are rocking rather large holes on their left knees. We...sort of didn't go shopping for school clothes this year, so the kids are all just working their way through last year's clothes. I mean, we knew we'd be homeschooling anyway, so it's not like you have to look nice a lot of the time; but this pandemic has meant that we've very rarely ever had to make an effort to look presentable this year. We can just lounge around in our pyjamas all day if we want to...and very often do. But I might consider getting the kids new pants sometime...if I have to...I guess. (What I really want to do is find a hook up for some good hand-me-downs, but that's difficult to do when one has just moved somewhere and finds themselves in the midst of a global pandemic so for now we're wearing down to threadbare. It's fine.) 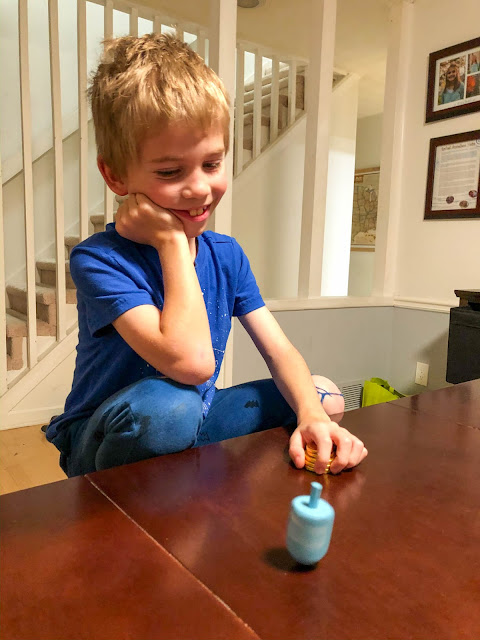 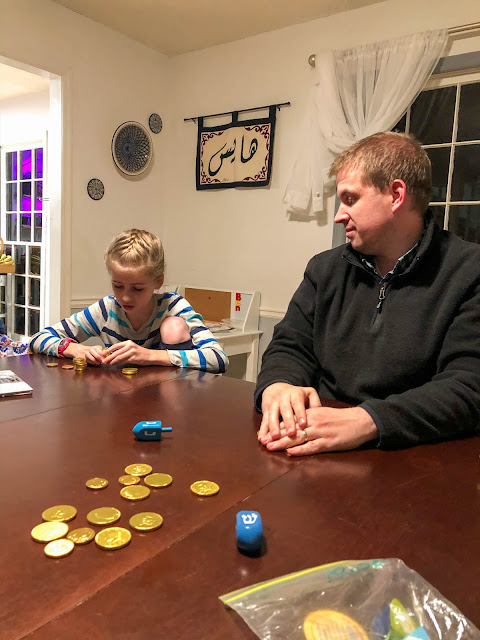 Here's Alexander with his owl Spot. 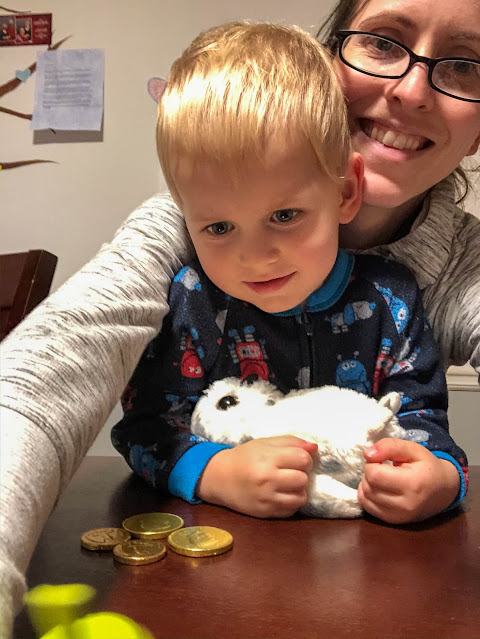 He and I played together on a team (because teamwork can make a dream work). He (and Zoë and Benjamin) were having a very silly day that involved a lot of giggles and danger giggles and screaming and running around the house like hooligans (and culminated in Alexander throwing a tube of toothpaste and hitting me in the head just as I'd come upstairs to brush his teeth...and then a big lecture from Daddy about settling down at bedtime). It was a long day. But I was happy to have him on my team. Even if he kept knocking our dreidel over, the little stinker. 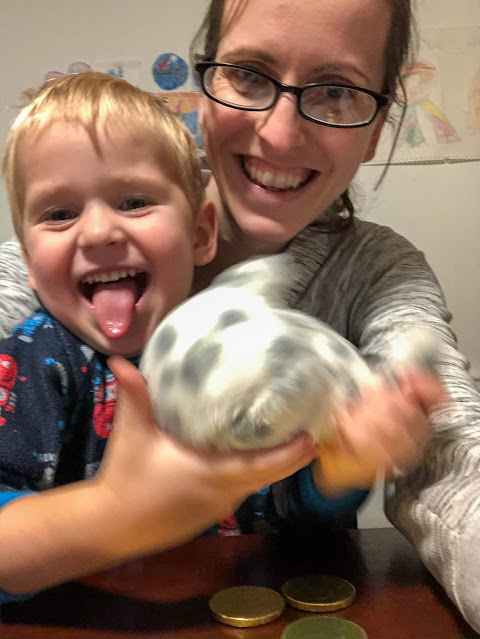 Zoë played, too, of course. She found spinning the dreidel a little tricky and was mostly looking forward to the end of the game (and the promise of getting to eat (a couple of) gold coins). 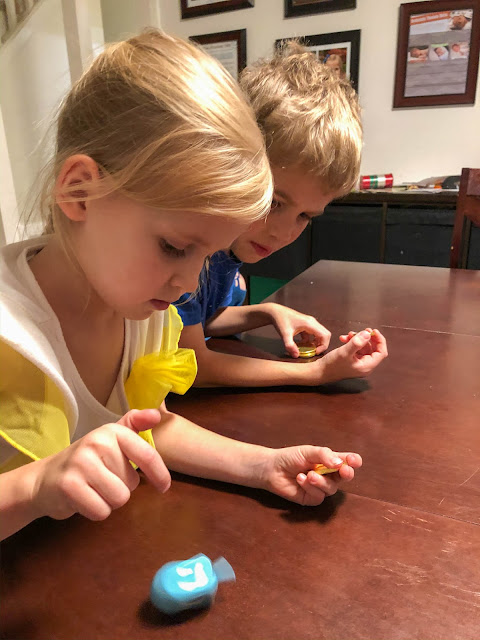 Here's Andrew waiting for his dreidel to stop spinning (he ended up getting second place): 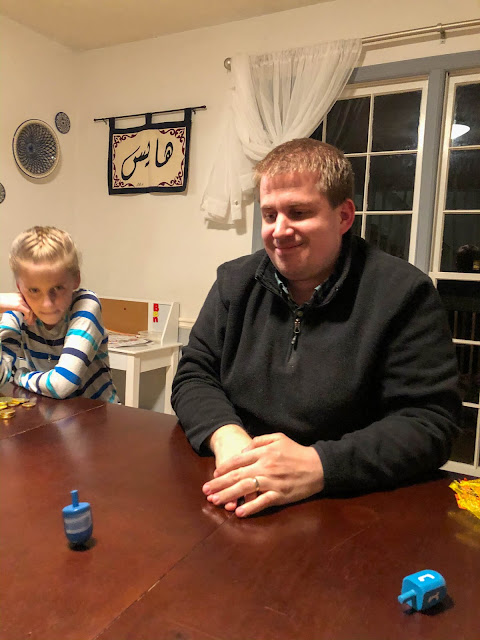 And here he is spinning a gold coin for some reason (that is not how the game goes): 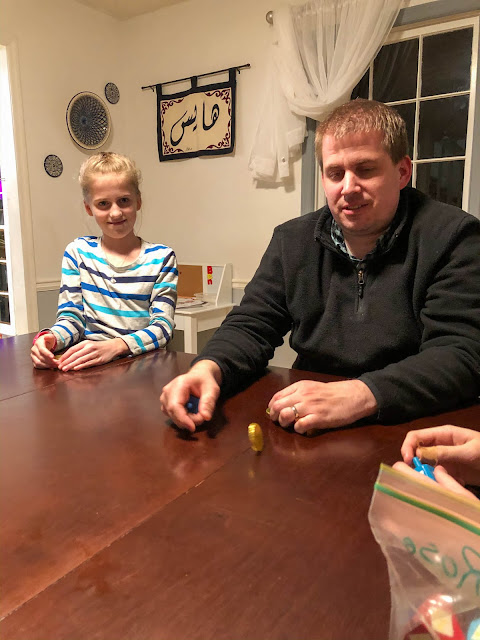 Rachel played, too! I'm not sure what she's calculating here... 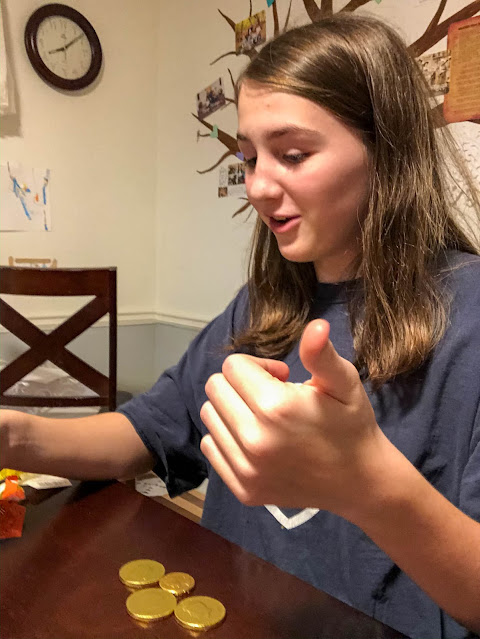 We finished off our evening divvying out two chocolate coins for the kids to eat while Andrew read our Christmas devotional and they all ended up getting very messy (by "they all" I mean Zoë and Alexander because apparently eating chocolate coins is tricky business). But that's alright. They're cute even when they're sticky. Happy Hanukkah!