We see these acorn plum galls quite often and only recently did we ever take one home to cut it open. Inside it does look rather plum-like—fleshy white fruit that bleeds red when its cut. This isn't a plum at all, however, but a tumor caused by an itty baby cynipid wasp that was laid on an acorn cap. I've seen other galls before, mostly on leaves, but these acorn plums were surprising to me when Benjamin filled the cupholders of the stroller with acorns (from the same oak he found this acorn plum) and I noticed that the gall really did have the same pattern as the acorn cap. So I guess I could see how it could grow alongside an acorn. 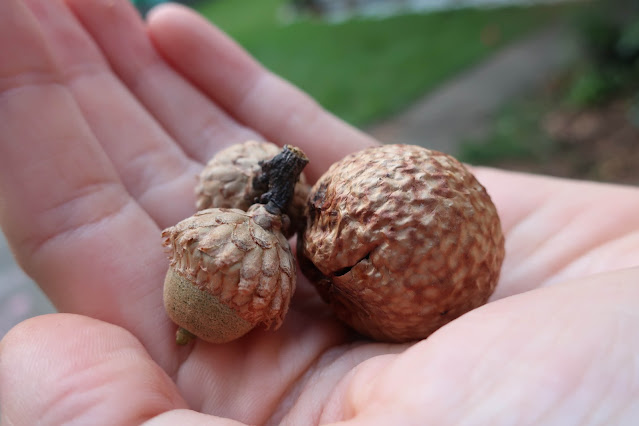 The kids have been very interested in collecting bugs lately. The weather is starting to turn fall-ish so we're starting to find dead cicadas all over the place. Interestingly enough, we're also seeing a lot of cicada molts as well. And I can't figure out why because I feel like we usually start finding those old molts earlier in the summer and expired cicadas later. But maybe they've always been contemporaneous and I just...am remembering wrong.

Anyway, the kids are all about collecting bugs these days, which I'm cool with. I was a little entomologist when I was younger as well. And obviously I still find bugs fascinating.

Andrew is less supportive of this hobby (though his dad told us that when he was younger, he used to sit outside and eat grasshoppers, so why he's squeamish when the kids bring caterpillars inside, I'll never know; I guess the key thing there is that he doesn't remember catching and eating grasshoppers).

Anyway, here's Alexander proudly showing off the cicada molt (left) and adult cicada (right) that he found on our walk yesterday. 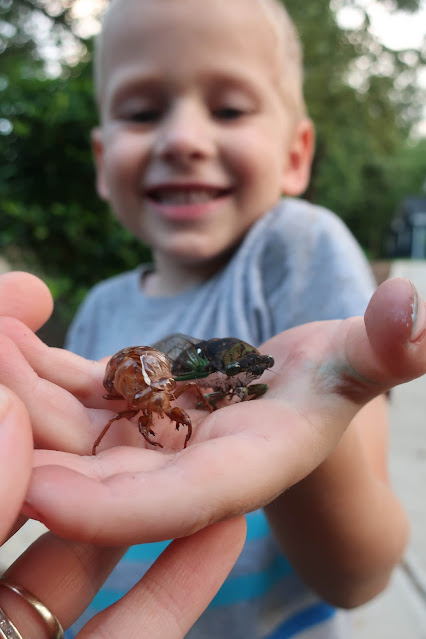 Today at the pool Alexander Zoë were fighting over a little monster puppet (that I believe my friend Amanda bought for my kids from the Puppet Museum in 2014) and I told them to figure out a solution.

Zoë stumbled across a dead katydid and used that as her character in their game. 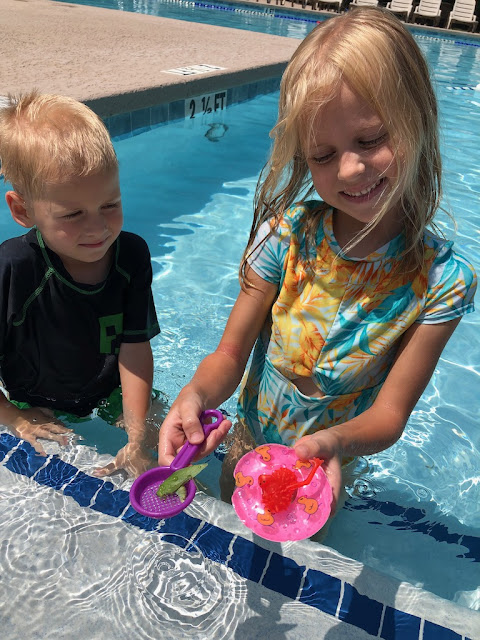 Andrew wasn't thrilled when they brought Katy home to meet him. And I'm not actually sure where it got off to. I know they had plans to add it to their collection, but we really do need to dry it out first...

Anyway, as we were loading up to head home after the pool, I heard a loud buzzing and then something thwacked into my head, so I shook my head back and forth to get it away (I like bugs...to a point) and it flew right into the van.

It was a ginormous wasp, that I recognized immediately as a cicada killer. These things look lethal, but they're really only a "marshmallow on the Schmidt Sting Pain Index." Still, I didn't want to tango with this two-inch stinging thing—and the kids were all screaming their heads off—so I instructed them to pile back out of the van to play at the playground while I watched to make sure the wasp went away. 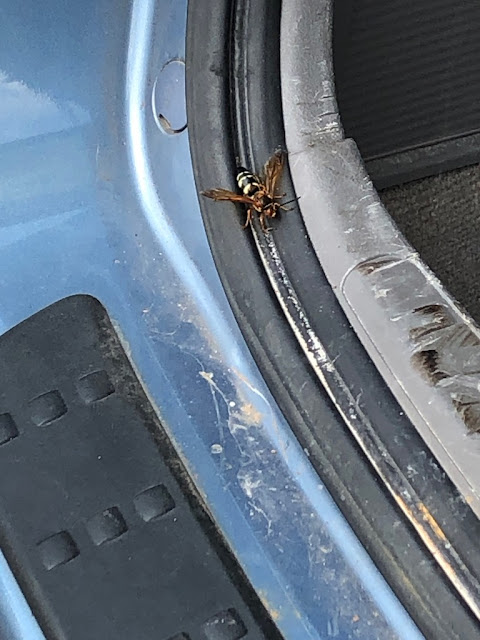 Cicada killers really do hunt and paralyze cicadas, but they don't actually eat them. At least, not in their adult form. The adults are actually quite docile and sip nectar from flowers and stuff. The cicadas they leave for their larvae to eat after they hatch. They don't have any instinct to protect their nest so rarely feel the need to sting humans. But they do look rather menacing.
And I definitely couldn't drive very well with one in the car, not with how much screaming the kids were doing!
It flew off after exploring Alexander's booster seat and the seat belt and the back hatch and we got home in time to put this little one down for a nap (technically she fell asleep in the car, but she transferred into her bed again, so that was okay): 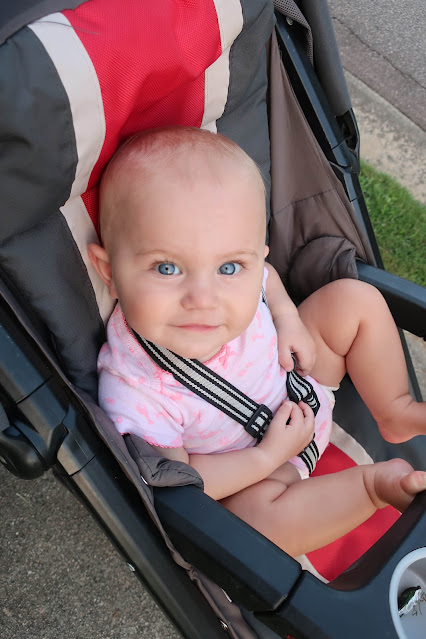 I'm missing a picture of this (but perhaps I'll be lucky enough to get one later), but yesterday Benjamin's friend of the street asked if I'd like to bring Phoebe up to his house to see the big hornet nest in his tree. So I did. And it was rather impressive.
I asked if they were afraid to play basketball.
"No," he said. "Why would we?"
"Because the nest is so close to the basketball hoop," I pointed out.
"It's not that close," he said. "We just...get the ball in the hoop...that's all. How would we miss the hoop that much?"
"Evidently you've never played basketball with me," I said.
I would have hit that hornet's nest with a basketball ages ago.
Anyway, I thought it was very pretty. But also scary.
While we were up there, I also complimented their spider flowers (cleomes).
"Oh, you like those?" he asked.
"I do," I said. "I think I want to plant some in our yard next spring after admiring yours and your neighbour's all summer!"
"Okay!" he said.
And the next thing I knew, he was offering me a little handful of tiny swirly seeds to toss into my garden (and later Benjamin brought down a little container full of seeds, which his friend assures me didn't even put a dent into the number of seed pods they have for these flowers). Spider flowers are self-propagating but are considered non-invasive, so although they are annuals, they're more than happy to send volunteers for the coming season.
Much like the zinnias we planted a few years ago (and haven't planted since). They just keep popping up. Somehow they're all pink, though we planted a variety of colours—yellow, orange, red, and pink. I don't know why that is. Perhaps we'll get a new package of zinnia seeds to sow alongside our volunteers next year to break up the colour palette next year. 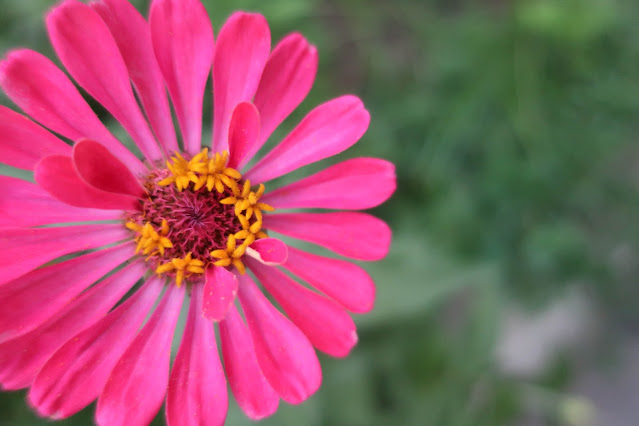