Andrew had to be on campus super early this morning, which was weird for several reasons. First of all, the semester hasn't even started, but Andrew is participating in a data science education workshop, so away he goes. Second, Andrew is not a morning person, but he's teaching a data science seminar-thing at 7:00 am for the next several weeks. It's online, but because he had to be on campus at 8:00 am for the workshop, he had to be on campus by 7:00 am to teach his seminar class beforehand (because he couldn't very well teach while he was commuting). Traffic in Atlanta can be gnarly, so Andrew calculated that to be safe he should leave the house by 5:15 am.
So he did.
And at 5:23 am I was (re-)awakened by a frenzied flurry of knockings on my bedroom door.
I peeled myself away from Phoebe and tip-toe ran across the room to open it, where the ever-polite Alexander stood waiting to be rescued.

"IN THE MIDDLE OF THE NIGHT?!?!"
"Technically it's just very early in the morning," I pointed out. "Why don't you come lie down in my bed and we'll all get a little more rest?"
Not only do my children struggle to fall asleep, they're also rather light sleepers. We're winning on every front over here!
*****
Andrew had a wonderful time at his workshop. I was nervous about Rachel and Miriam, who had to do their own data science homework without their resident tutor around (though he did some troubleshooting from afar and I was even able to help point them in the right direction a time or two (because today one of their lessons was on executing advanced searches on a search engine and...I can do that!)).
It's rather unfortunate timing for Andrew's workshop because we're doing a little work in our kitchen right now, so in addition to our oven/microwave being dead (though a new one is getting delivered this week), our stove and sink are also out of commission and we'll have handymen streaming through for the next couple of days to piece the kitchen back together...hopefully with better wiring than before!!
(It's always nice to unhook your stove and discover that the whole thing was jimmy-rigged in there and the wire connectors have been melted and fried to a crisp; I really hope having professionals reinstall the stove will mean a better/safer job).
I had been hoping to take the kids to the pool and leave Andrew at home to deal with all the kitchen mess. Instead he's off on campus and I'm left at home with all the kids and the kitchen mess. Should be a fun time...
*****
I had to run to the library today, so I waited until Phoebe had gone down for a nap and then headed to the library with the boys. Benjamin talked me into it by saying that I shouldn't have to carry all the books by myself (it is an awfully big load each time) and Alexander talked me into it by reminding me that he's "fully vaccined" and would wear a mask and be so careful.
He was so excited to visit the library. I should have taken a picture...but I didn't. He was chatting on and on about how he hadn't been in the library since he was two. But he didn't ever get to go to the library when he was three. Now he's four and he's gone to the library one time as a four-year-old.
And...my heart!
How I would love to just take him places!! I'm trying to be braver about it...but the truth is that I'm just not brave about it. Because being that sick—having all of us be that sick—was awful. And I just don't want to gamble with long-term consequences.
So story time will have to wait, but I don't think there's too much risk running in and letting him choose a few books while all the other kids in town are in school (and, besides, I'm a wonderful storyteller so he's not missing much). He was so excited to choose whatever book piqued his interest. He filled up his bag quickly while Benjamin was over in the chapter books. Then they both helped me check them out and we came home and threw away a bunch of our intended school plans in order to Drop Everything And Read.
The kids always do that when I come home from the library. Last time I went I got about 60 picturebooks out and Zoë read them all that same afternoon.
Here's a picture of Zoë and Benjamin each reading a different volume of the Frank Einstein series by Jon Scieszka: 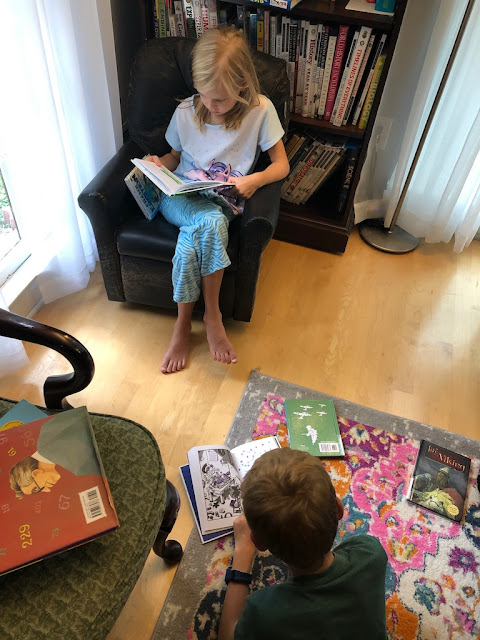 Phoebe was so excited for me to come home. She'd woken up from her nap five minutes after we left (the little stinker) and was dancing and playing in the music room with Zoë while Miriam practiced the piano.
When I walked into the room she looked up at me and—for the first time—signed "milk."
So that was exciting!
And of course she got her milk.
*****
When Daddy finally came home (around 8:00 this evening) she excitedly—for the first time—took up his offer for a high five.
Rachel's only been trying to teach her that since day one!
Seriously! Rachel accidentally offered Phoebe a high five on the day we brought her home from the hospital and has been jokingly offering her high fives and fist bumps ever since. So Phoebe has had plenty of exposure to the idea of high five-ing, but tonight she was quite enthusiastic about giving high fives, lifting her arm high in the air to make a satisfying *smack* in Daddy's hand (or Mommy's hand or whoever else was offering because everyone wanted to get in on the action).
*****
Phoebe is such an interesting baby because she likes Andrew.
So many of our babies have been 100% Team Mom that having a baby who not only tolerates but wants Andrew is...weird.
It's nice.
But it's weird.
And it makes me nervous for when he'll have to go out of town or stay late on campus because she does not settle to sleep until she's had her fill of Daddy time.
She needed lots of Daddy snuggles when he got home today, and then I fed her and put her to bed, but she woke up wanting more Daddy, so he took her on a little vacuum walk (he turns on the robo-vacuum and they walk slowly behind it while she drifts off to sleep) and then put her to bed. And then she woke up so I fed her again and put her to bed.
She woke up fussing again while Andrew was in the shower (after his bike ride and after disconnecting the stove top and finding all the melted wiring) so I paced around with her while she cried and pushed away from me.
But as soon as she was in Daddy's arms she snuggled right into his shoulder to fall asleep.

It's not that she never wants me. She often does. But if she's decided she wants Daddy, well...then she needs her Daddy. And I have to admit that it's sometime nice to be the one who's not wanted!