Today's story is not my story because I stayed at home, somewhat sick, with Zoë, who had been up all night with a raging fever and round after round of vomit, and Phoebe, who likes to hang around me for some reason. Andrew had his faculty retreat today (they retreated...to the conference room for eight solid hours). Grandpa took the rest of the kids hiking at High State Park.
This is their story.
Zoë wishes it were her story.
When I first took her temperature in the morning (after, you know, she finally went to bed at 5:30 after throwing up while refilling her water bottle at the fridge...and getting vomit all over the fridge and the floor...which Andrew cleaned up because I was in bed with my own fever), it was hovering around 104°F. So I gave her some ibuprofen (which is the only medicine she can take without gagging; literally I'll be like, "Time for your medicine," and she'll say, "Cherry or berry?" If the answer is "berry" (ibuprofen) she'll slurp it right up, but if the answer is "cherry" (Tylenol) then she reluctantly gags it down).
Fortunately, it was berry's turn and she happily gulped it down and then over the course of the next hour or so her fever receded.
She asked me, just as the kids were leaving, to take her temperature again. So, thinking nothing of it, I did.
"98.7°F," I announced.
"So...no fever?" she asked.
"No fever," I said. "But..."
She jumped up off the couch (where she was sleeping because getting out of the top bunk every time she wanted to vomit was...difficult) and started stripping off her pyjamas.
"Whoa, whoa, whoa!" I said. "What are you doing?"
"I want to go!" she said.
"Want to go where?"
"Hiking! With everyone else!"
"Oh, you are not well enough to go hiking!" I said.
She collapsed on the couch sobbing and Rachel, who was just leaving, asked Grandpa to come back inside to say goodbye to Zoë, who he had missed seeing when he was in the house. He told her they'd hike to the falls another time when she wasn't sick and was able to come with everyone.
And then they left.
And Phoebe waved "bye bye," which I didn't know she knew how to do.
And Zoë stewed on the couch until she recognized that she didn't actually feel better, and then she settled in for a full day of watching Bluey and Minnie Mouse...Bow Toons? Or something?
And I had a couple of meetings and our new oven got delivered and Andrew ran over something on the highway coming home and got a flat tire...again. This is his third one in three years. Ugh.
Anyway, that's not what this post is about.
This post is about the kids and their adventure at High State Park, an adventure I was not party to and thus can't tell you very much about, except to tell you...
It was exceedingly muggy outside.
The camera (which Rachel was toting) kept fogging up, as did Miriam's glasses (she eventually took them off and hiked blindly, since she could see better with her poor natural vision than she could through her foggy lenses): 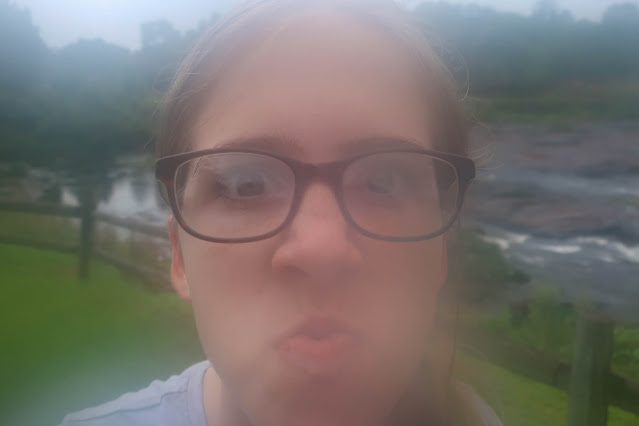 They parked at a parking lot and then hiked a trail to get view the "tumbling cascades on the Towaliga River." The falls are significant because they are along the fall line, "a geological boundary, about twenty miles wide, running northeast across Georgia from Columbus to Augusta," home to a series of waterfalls that keep alligators to the south.
The Falls View Trail is currently closed, and the kids told me that they turned off the trail they started out on to check out Tranquility Trail, so I'm going to assume they started out on the Historic Trail.
The Historic Trail took they right to the power station and offered them a lovely view of the dam and the waterfall. Historic Trail is only a half mile and is completely ADA accessible: 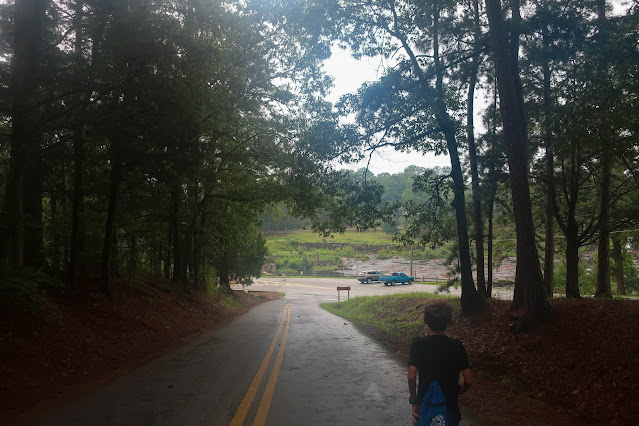 Tranquil Trail is 2.5 miles, is rated a "moderate" level of hiking, is not ADA accessible, and...is a loop (that part is important).
First, let's enjoy the view from Historic Trail...
A bird on a wire: 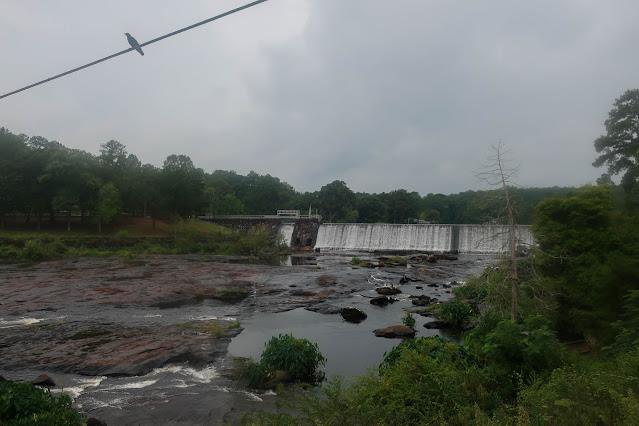 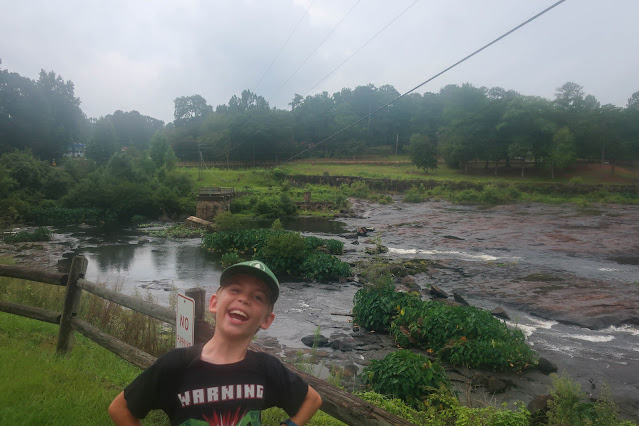 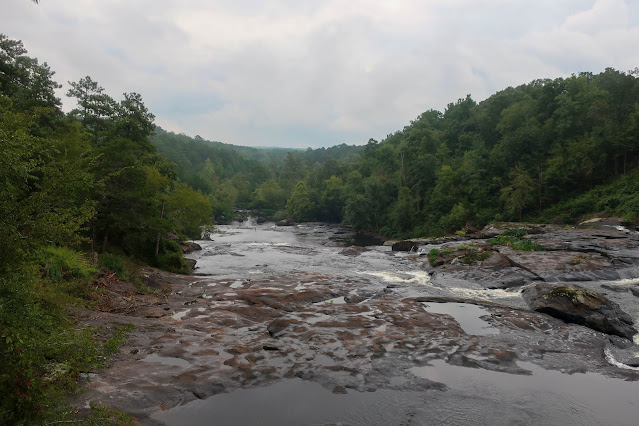 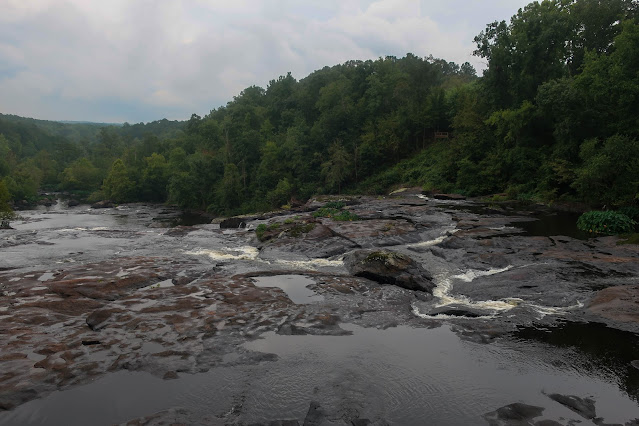 You can see that some serious storm clouds are looming: 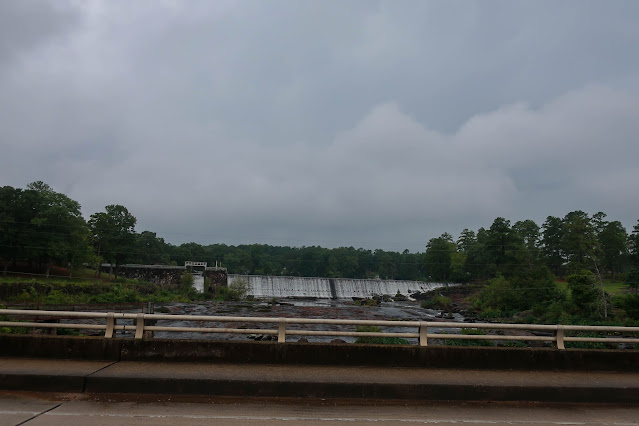 More of the Historic Trail, I presume; 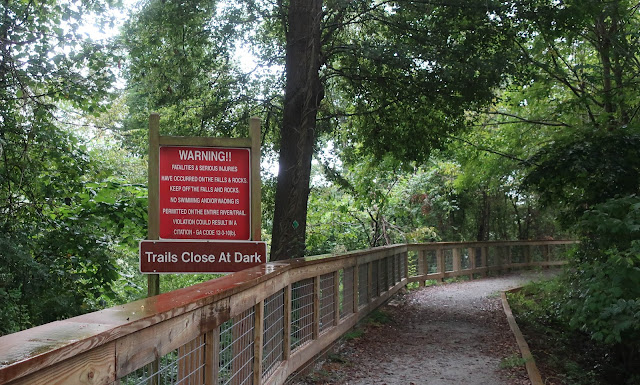 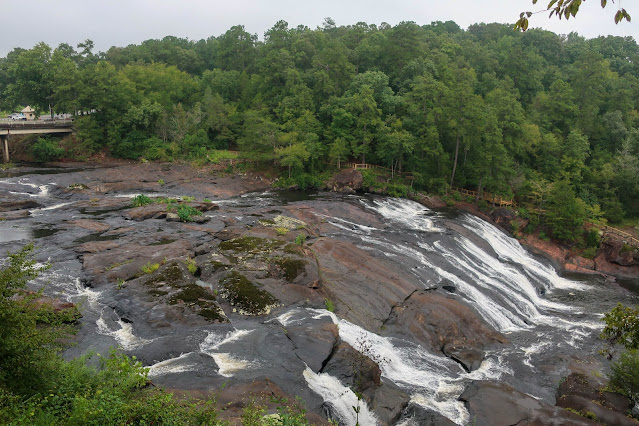 Look! Some cool...aqueduct thingies? Holders for some sort of pipe or tube system? 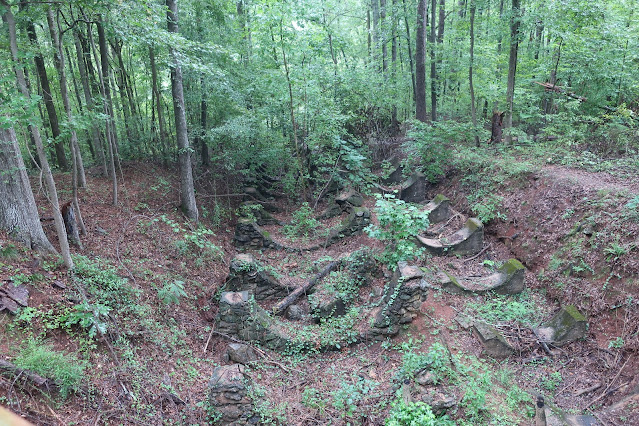 And here we are, on what I presume is now the Tranquil Trail (of terror): 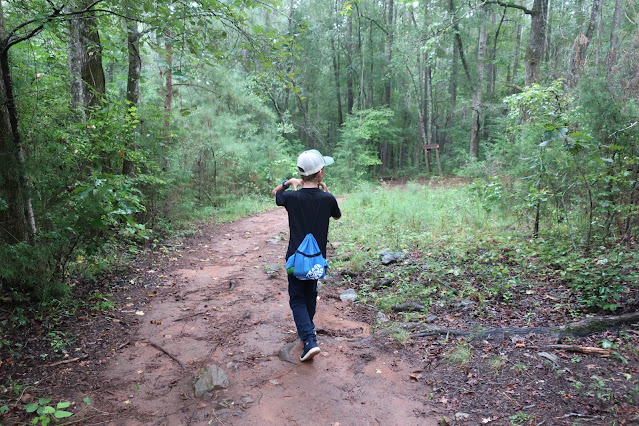 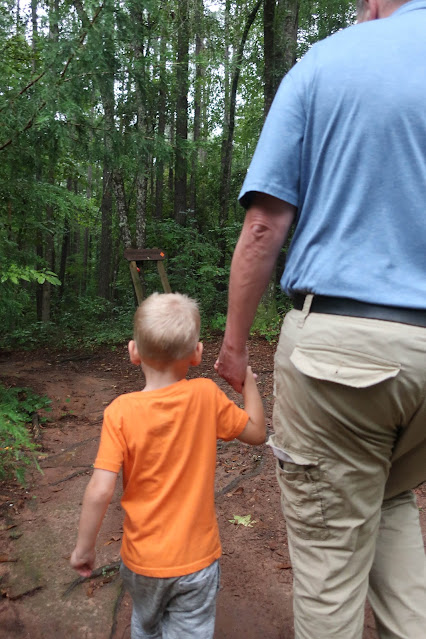 This little vermiculus (worm, which is what folks tend to call caterpillars down here) tried to warn them to stay away! "Stay away!" 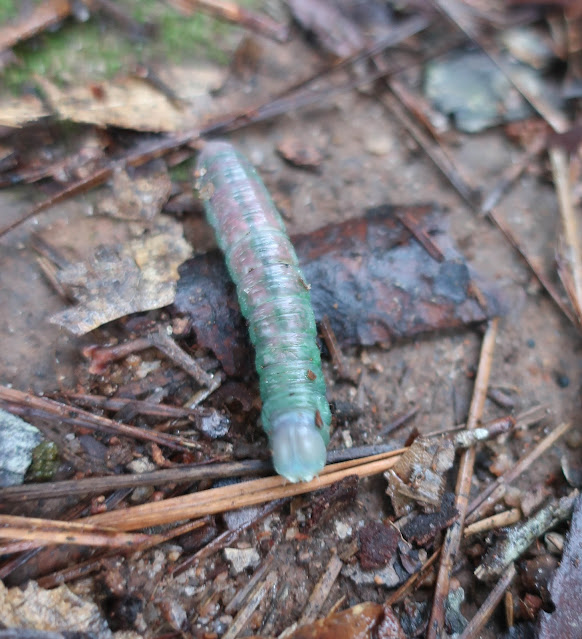 Really the trail was fine. It probably would have even been tranquil if that storm cloud hadn't unleashed its fury on them. That's when the camera went away. And when they stopped keeping track of where they'd been and where they were going. Instead they wandered around and around and around and...
Eventually they made it to the camping ground?
And got stuck on a loop there?
And then, finally, soaking wet and tired, they stumbled across a park ranger and asked for directions to the parking lot.
"The parking lot?!" the ranger exclaimed. "Why, that's miles away. How'd you get way out here? Hop in my truck..."
So, our intrepid hikers piled into the back of the park ranger's pickup truck, which Benjamin found both mortifying (now a park ranger knows he was lost!) and exhilarating (he was in the back of a park ranger vehicle!) and which Alexander mostly found anxiety-inducing (he was lost, sitting in the back of a park ranger vehicle, with no car seat—with no seat belt!—and this all just seemed wildly unsafe to him).
Grandpa tried to calm Alexander down by telling him about all the times he rode in the back of a truck in his more youthful days, when such shenanigans were more common.
They picked up two more lost and weary hikers on the way, so they had seven people total riding in the back of a pick-up truck back to the parking lot through a raging storm (probably contributing to Alexander's anxiety—in the back of a truck, with no car seat, no seat belt, in the middle of a storm?!?!).
Though drenched, they were happy to once again see Grandpa's vehicle and guess what everyone announced their favourite part of the day was at dinner!
Getting lost and taking a ride in a park ranger vehicle!
Posted by Nancy at 1:18 AM