Alexander has been experiencing a recurrent fever the past little while. He's usually fine during the day, but by the time we put him to bed he'll be running a temperature. Not always. Just often.

We put him to bed with a fever last night. He woke up still feeling feverish this morning. Evidently he knew that something was amiss because he texted me to ask me to bring him some breakfast upstairs. Now food is usually verboten upstairs...unless you happen to be quarantining in your room. There has been a lot of eating in unusual places over the course of the summer as various people have been isolating for various reasons.

Anyway, I didn't respond to his text messages right away because I was still in bed with Phoebe, but when I did grab my phone to look at it the first few messages were from Benjamin's phone and I immediately became concerned.

I took a screen shot and sent it to Andrew (who was long-since up and working downstairs; he's got that 7 am thing going on) and asked him to verify whether Benjamin was, like, even in the house?! He has been known to sleep walk and I was just a little concerned at the nonsensical nature of this text. Why was he talking about lunch? Back out to his house? What is he even talking about? 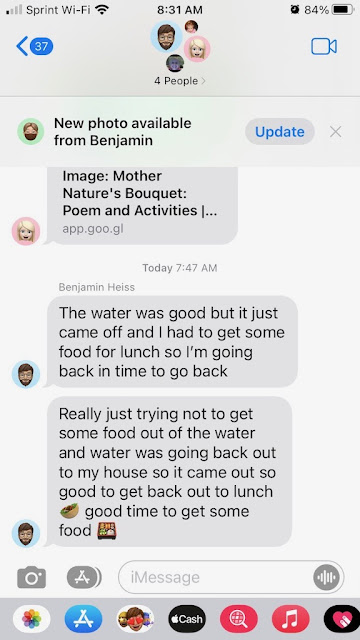 Evidently Andrew found the texts (or my panic over the texts) concerning as well because he rushed upstairs to check on Benjamin, who was still asleep (obviously we don't live by the mantra "early to bed, early to rise"). Alexander, however, was busy texting away on his phone, so Andrew invited him to come on downstairs for breakfast.

mom can u Breg mi Brecvst uP strs 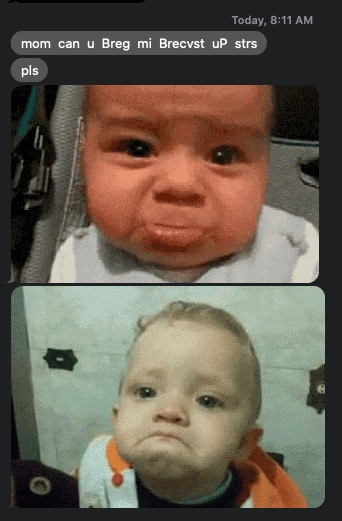